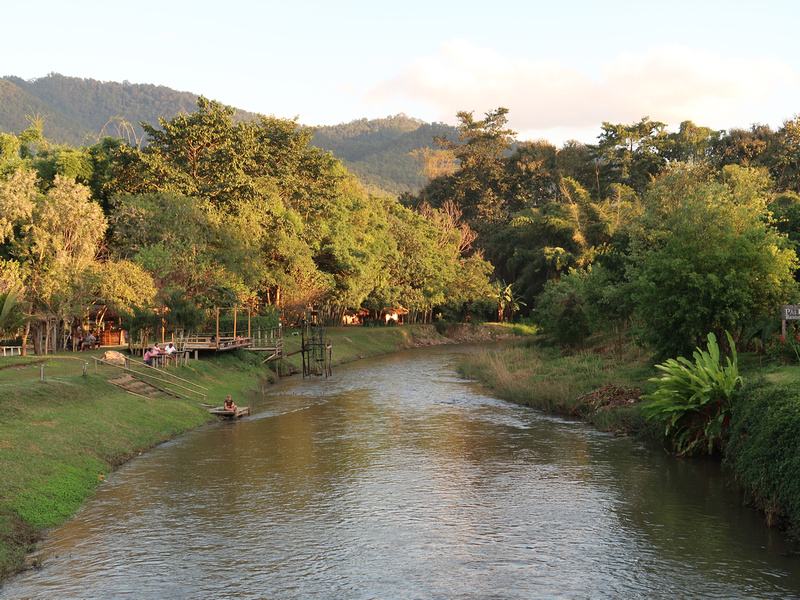 Pai is in the mountainous northwest of Thailand, about 140KM from Chiang Mai. As a frequent visitor to Chiang Mai I’ve heard all about Pai, yet I had never been. I can trace my reluctance to visit down to the arduous road journey by minivan, and by hippies.

On one of my early visits to Chiang Mai (perhaps in 2010) I was on the train to Chiang Mai when some hippies got onboard. They had no shoes on and their feet were dirty, and they were putting their feet on the seat! If there was a train version of Passenger Shaming you would see their feet on it. Even the poorest person in Thailand can scratch together a few baht to buy some flip-flops, and then you take your shoes off when you are inside. I can’t imagine a Thai person inviting you into their house with blackened feet.

They were on their way to Pai, so that encounter put me off going for a while.

I visit Thailand a few times a year but I always tend to gravitate towards the same places (i.e Bangkok and Chiang Mai), so I make a point to visit a couple of new places every year. On my latest trip to Chiang Mai I resolved to visit Pai, mainly out of embarrassment for not having been there yet. I also wanted to see what Pai as a town was like. Most of the “things to do in Pai” blog posts I’ve read are actually about things to do around Pai. It sounded more like a place where you rest and then go out exploring the surrounding hillsides. 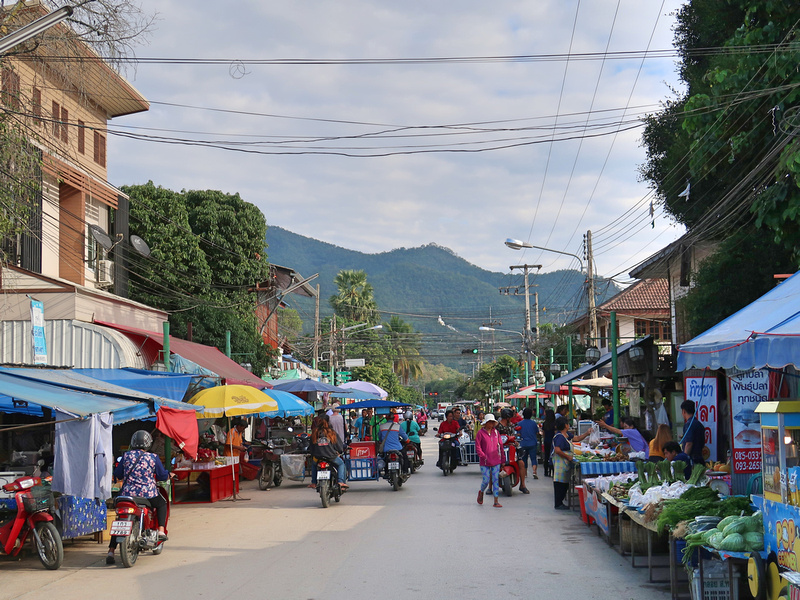 I was most dreading the minivan ride, of which the drivers in Thailand have earned a bad reputation. The minivans I’ve caught from Bangkok to Hua Hun felt unsafe, and the mini van ferrying visa runners from Krabi to Penang made me swear off this form of transport for the foreseeable future.

I was thinking about his driving and how well he must know the road. If he does this return trip 250 times a year, over a 10 year career he would have driven this road 5000 times. We had a 30-minute break midway through the mountainous section. It was a long break for a short drive, but I was totally cool with letting the driver have a rest if he is doing this twice a day.

According the the Pai T-shirt that you see everywhere, there are 762 turns in the road. I didn’t count but I’ll take their word for it. 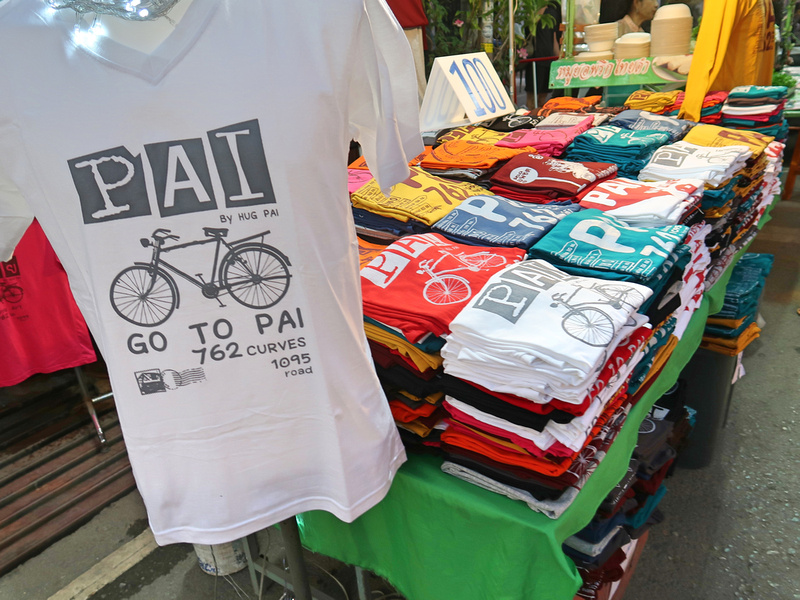 Towards the end when it felt more like 7620 twists and turns, the road empties out into a pleasant valley with glorious flat and straight roads. 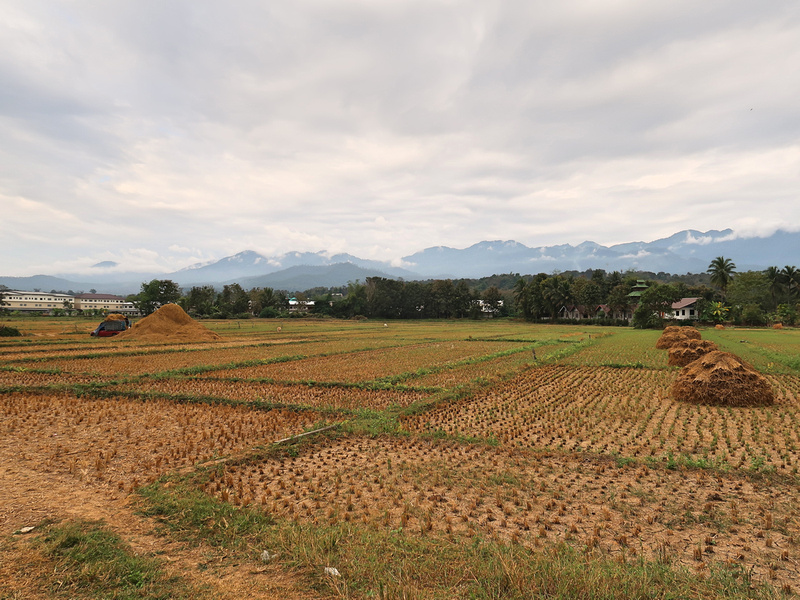 I liked Pai immediately, though I was suspicious if it was because I was happy to be out of the minivan. No, I really liked the vibe here. It felt like a smaller version of Chiang Mai, with a mountain at each end instead of just the one like in Chiang Mai. 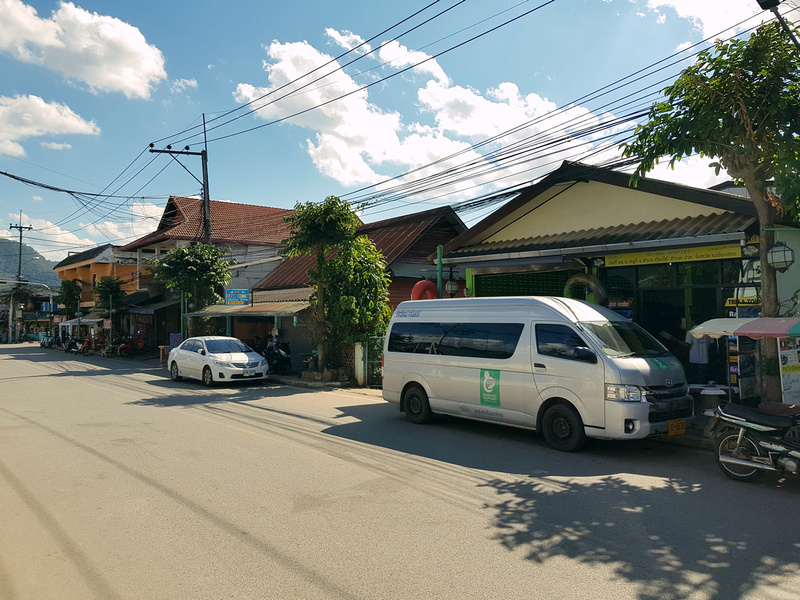 After the three hour minivan ride and then 20 minute walk to my guesthouse it was already way past my lunch time. I’m known to make bad decisions when I’m hungry, and today was no exception.

After checking in I went hunting for food and ended up in the backpacker area. I was too hungry to keep walking so I sat myself at a backpacker eatery and had an overpriced vegetable stir-fry (mostly onions) and rice. I got a banana smoothie, which was more like a crunchy with chunks of ice and grainy bits of sugar (which I forgot to ask without).

To be fair if you are coming from Chiang Mai you get a bit spoiled with smoothies there. If you are making smoothies in Northern Thailand you should make a visit to Mrs Pa and see how to make a real smoothie.

With my hunger sated but disappointed in myself with such a mediocre introduction to food, I made a note of the local noodle stalls as I went walking. I went by a stall which had no English but had all the ingredients for a Khao Soi, the famous noodle dish of the north. 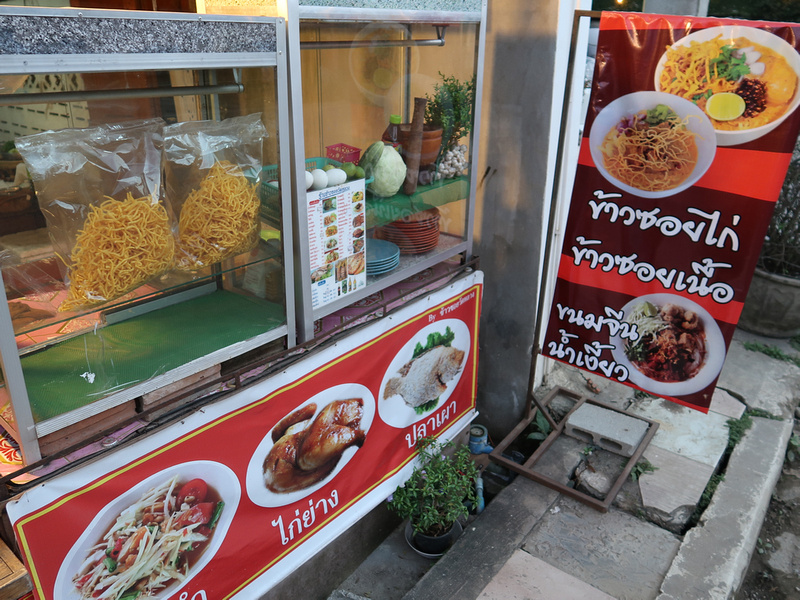 I went back later and redeemed myself in the food department. 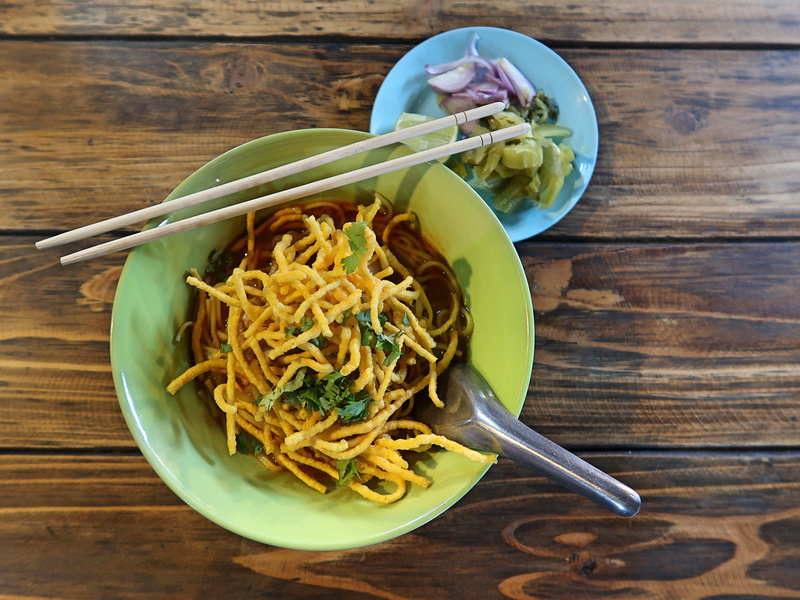 Pai is famous for hippies, but most of the hippies are living in the hills off the grid. I was more surprised by how many backpackers there are. I should have figured that out in Chiang Mai, where every hostel and guesthouse (of which there are many) are advertising minivan services to Pai. 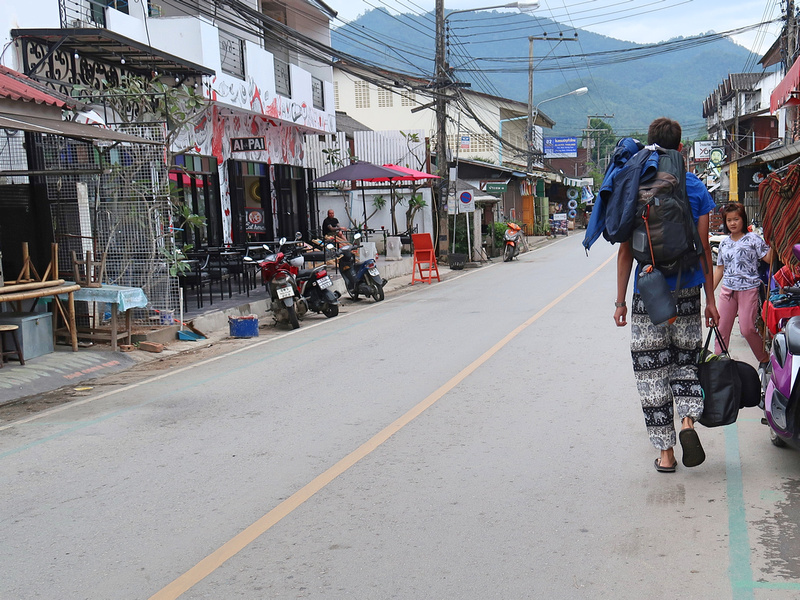 There is a walking street that goes from the main road to the river, and it’s lined with backpacker establishments, with more backpackers joints spilling over into the side streets. 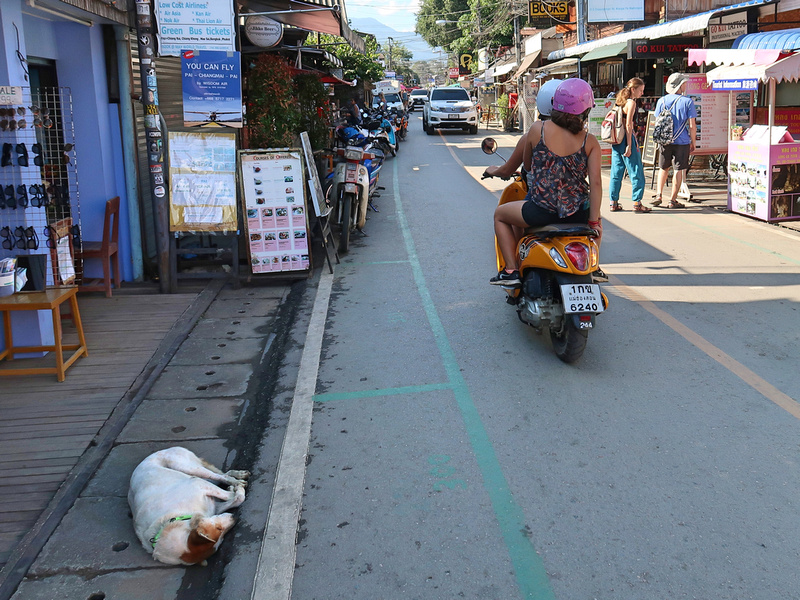 I would say that the size of this street rivals the backpacker area of Khao San Rd in Bangkok (but without the noisy mega-bars). After a lap of the main street I had a general idea of what the main sites and activities are here. 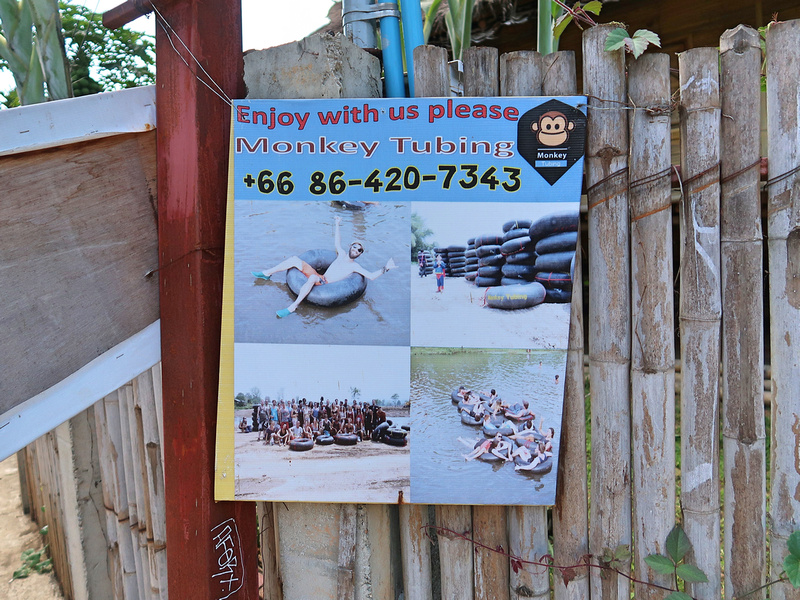 Pai is truly an A-list banana pancake trail destination, which is all the more remarkable in that it’s not on the way to anywhere else.

Also in abundance are Chinese tourists, which shouldn’t be surprising now given Thailand’s popularity to Chinese. Indeed, maybe the Chinese are walking around Pai wondering why there are so many westerners here, so far away from home. Most of the tourists from China appear to be independent travellers, also coming via mini van from Chiang Mai. Away from the beach resort places I’m noticing more independent travellers as opposed to the cliched tour bus full of Chinese tourists. 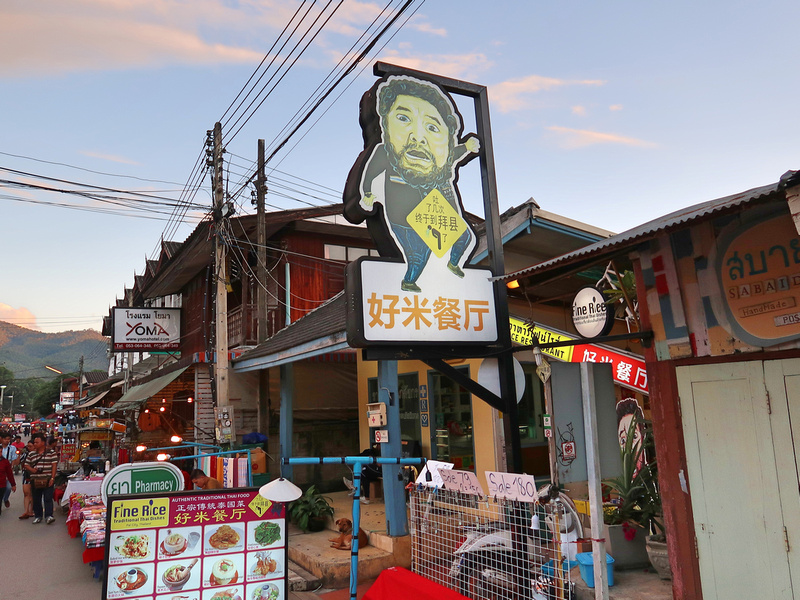 Another group that I wasn’t expecting was the muslim community. There is a mosque in the town centre, and lots of ladies wearing the niqab dress. I thought they might have been transplants from southern Thailand, but they are Thai Muslims of Hui (ethnic Chinese Muslim) origin. 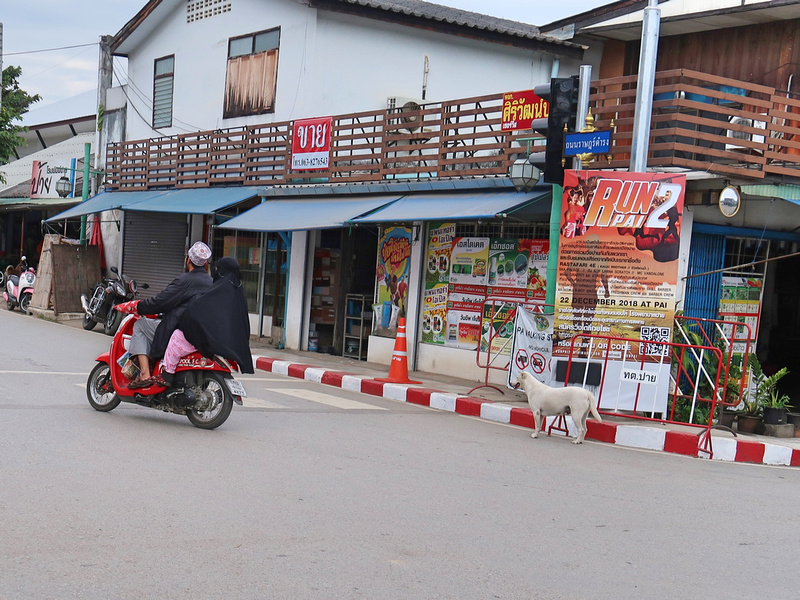 I lucked out when booking accommodation as I didn’t know the layout of the town. I booked a bungalow on the other side of the town, which made me walk through the normal, everyday Pai. This was the Pai I wanted to see. 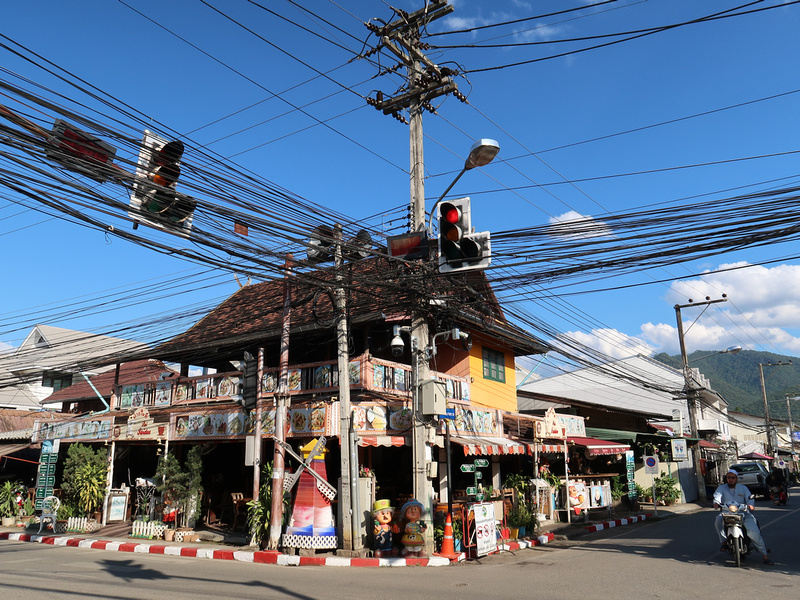 I went to the local market, and just generally wandered around looking at every day life in Pai. 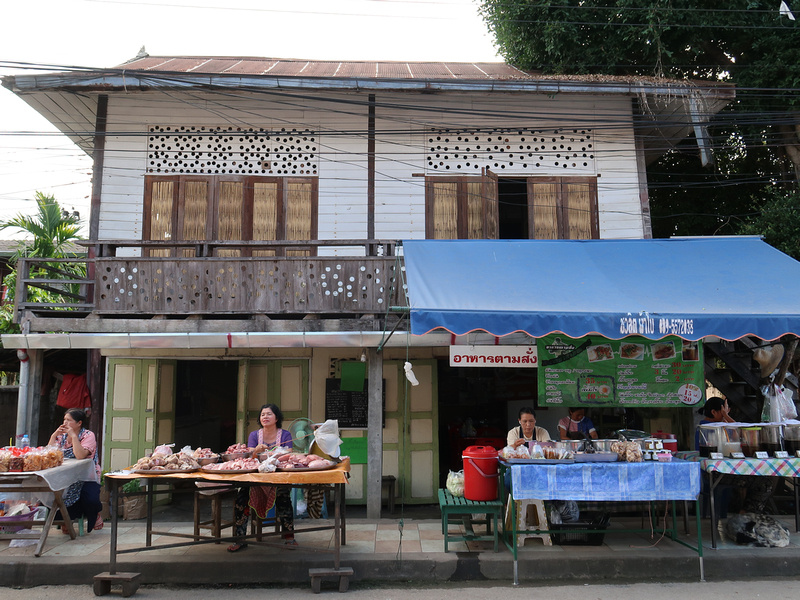 After wandering I walked back down to the river near the backpacker area, which was hard to resist.

It’s so green and beautiful here that I see why people rave about it. I noted on my Facebook page that Pai is like The Shire, but with hippies instead of hobbits. 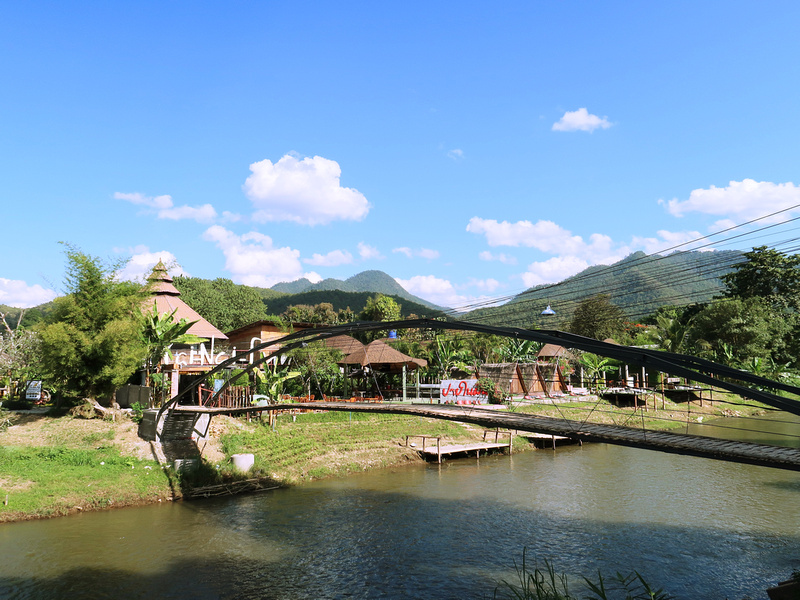 After seeing the accommodation on the river I did have bungalow envy. I settled for finding cafes by the riverside. 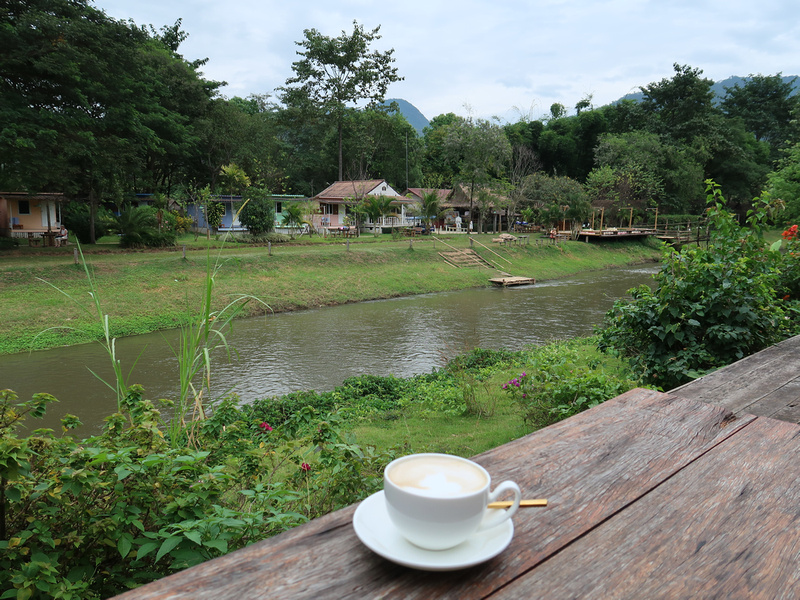 At night the main backpacker street transforms into a lively night market. 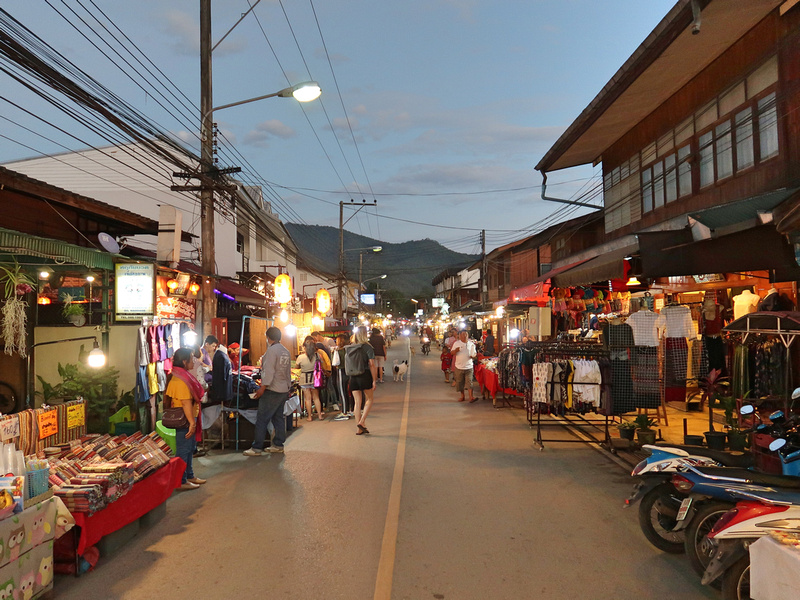 If I don’t have a plan for what to visit I’ll usually just mark some well-rated cafes onto my Google Maps, and I’ll use those stars as targets to walk to. 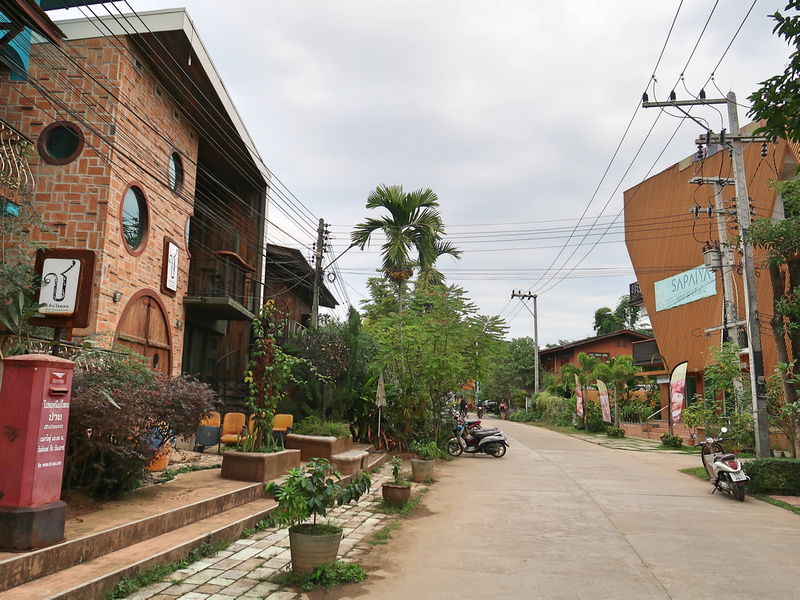 One of my targets was KH Aotha Cafe, which took me down what appeared to be the hipster neighbourhood of Pai. I probably wouldn’t have come here if it wasn’t for the cafe as it’s not really on the way to anything. For a town with a population of just over 2000 people, Pai has a lot of good cafes and restaurants to choose from. 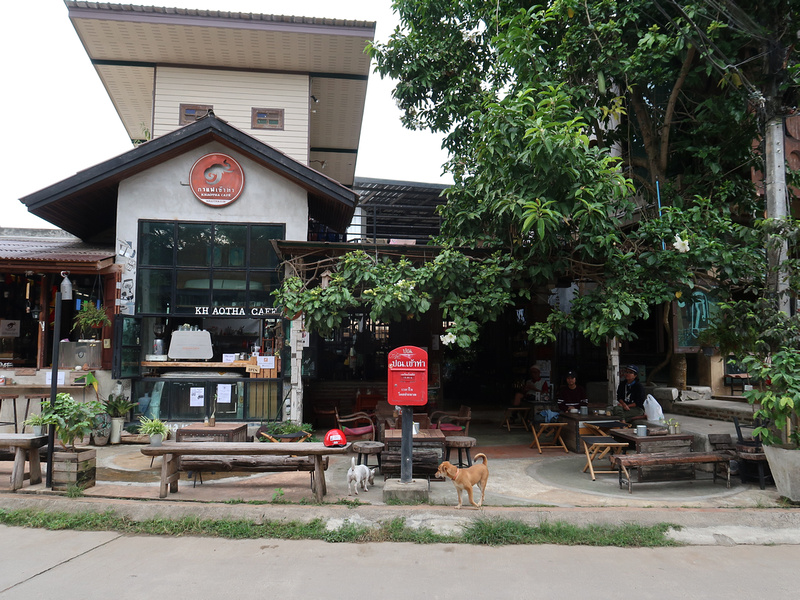 I can see how people end up staying here longer than intended. As for living here, if you wanted to make a life somewhere and didn’t need to travel so much then there are worse places to live. I know people who have moved here, and it’s certainly an appealing lifestyle if you’ve been exposed for too long to the urban grind of Bangkok.

For me it falls out of the range of an international airport. Then again if it was close to an airport (say, only an hour from CNX airport) then it would probably be overrun by now. The mountainous entrance to Pai acts as a filter to over-tourism. If it was easier to get to Pai would be a madhouse by now. 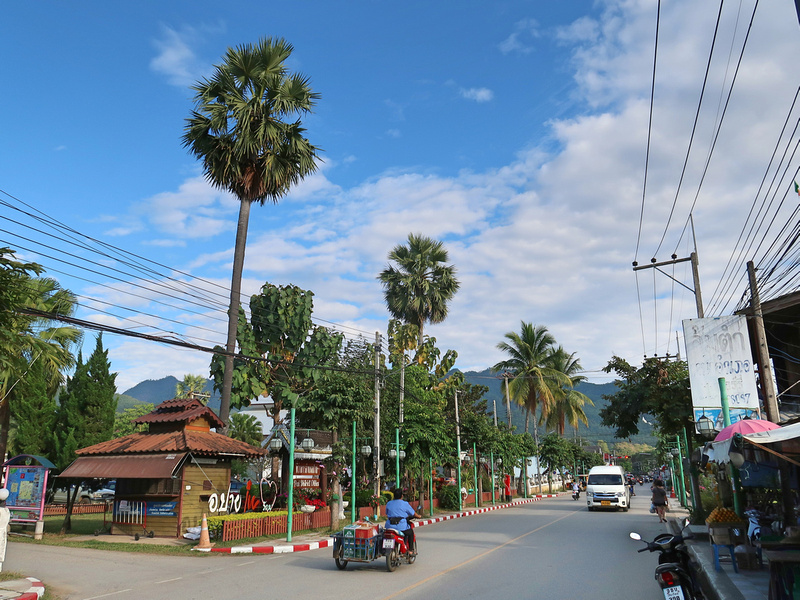 There is a small airport here, and I had considered flying. Kan Air used to operate flights to Chiang Mai, and now Wisdom Air fly here. It’s only a small aircraft and flights fill fast, so it’s something you need to plan in advance. 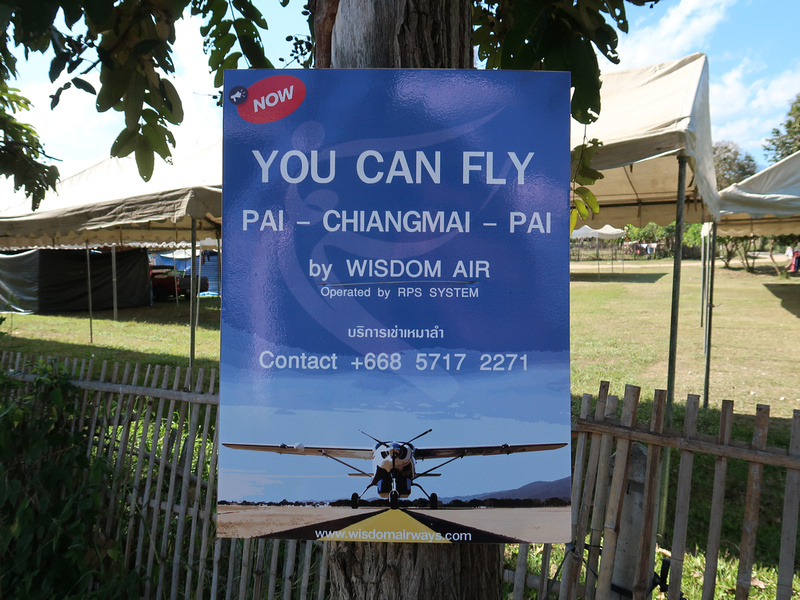 I had considered flying back, but instead I opted to continue my journey to Mae Hong Son. That’s also a minivan into the mountains with hundreds more bends in the road, but there are more scheduled flights from there to Chiang Mai. 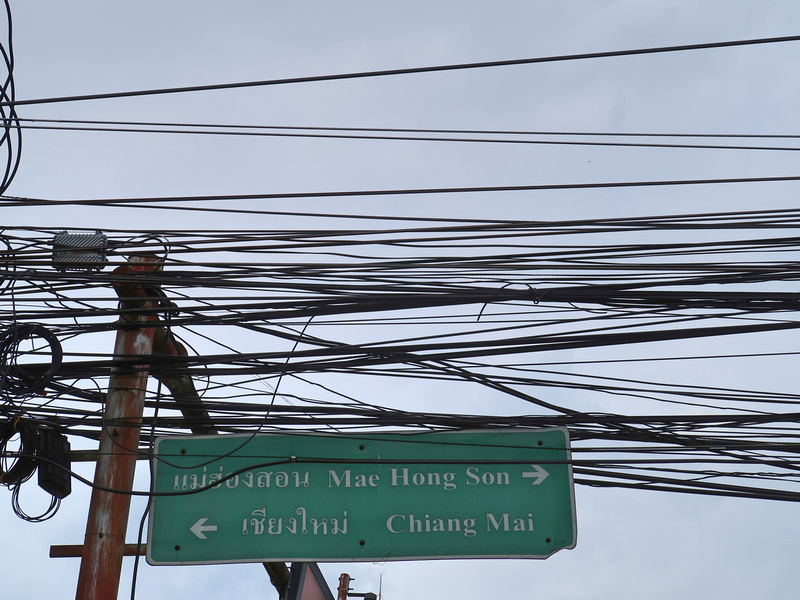