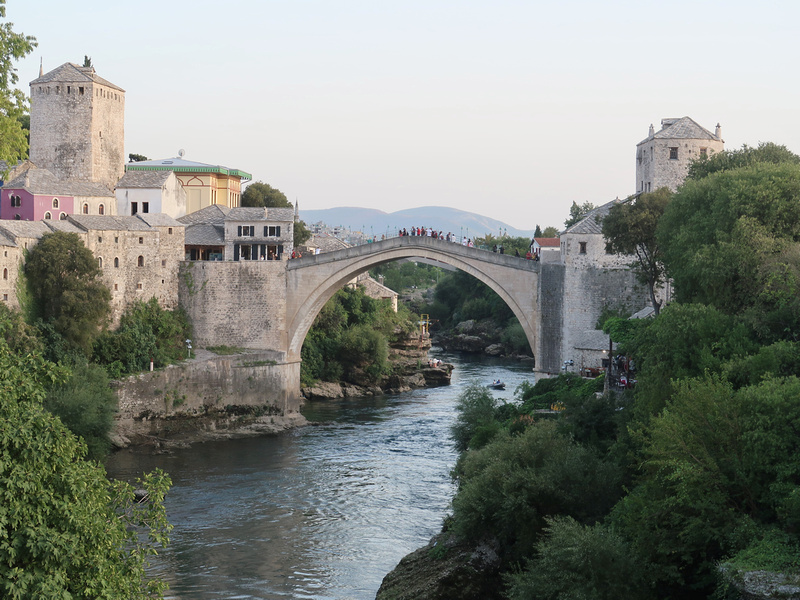 Mostar is home to one of the most famous bridges in Europe. For those of us who lived through the nineties news cycle of the Yugoslav Wars, it become a symbol of the war when it was destroyed during the Bosnian War in 1993. The Stari Most (Old Bridge) has since been reconstructed and is now one of the most well-known symbols of Bosnia and Herzegovina. 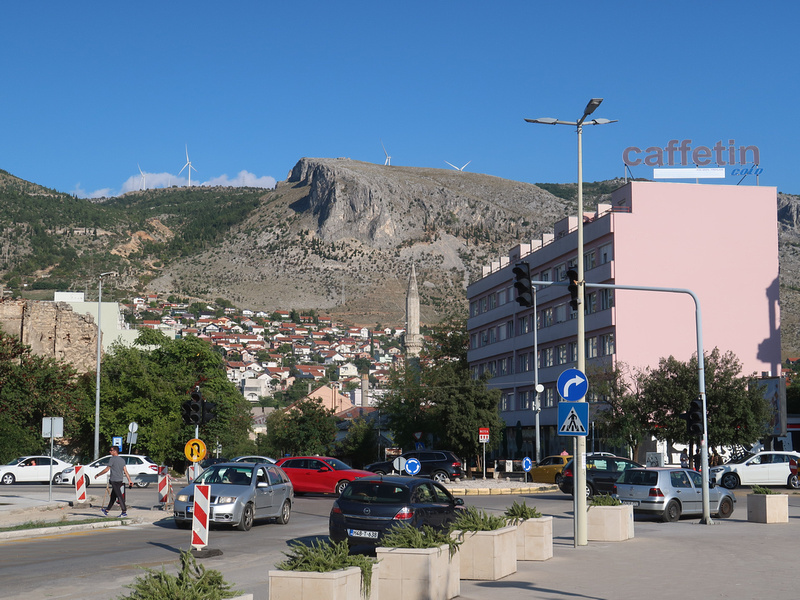 My interest in visiting (apart from visiting the country properly) was to get the train from Mostar to Sarajevo, which is listed by Eurail as one of the most scenic routes in Europe.

As is the case for most places that are only known for one landmark, there is more to Mostar than the bridge.

As soon as I dropped my bags off at my guesthouse I walked straight to the bridge. I had no idea what to expect of the city, so I was pleased to find myself walking through an Ottoman-era old town with cobbled streets and old mosques. 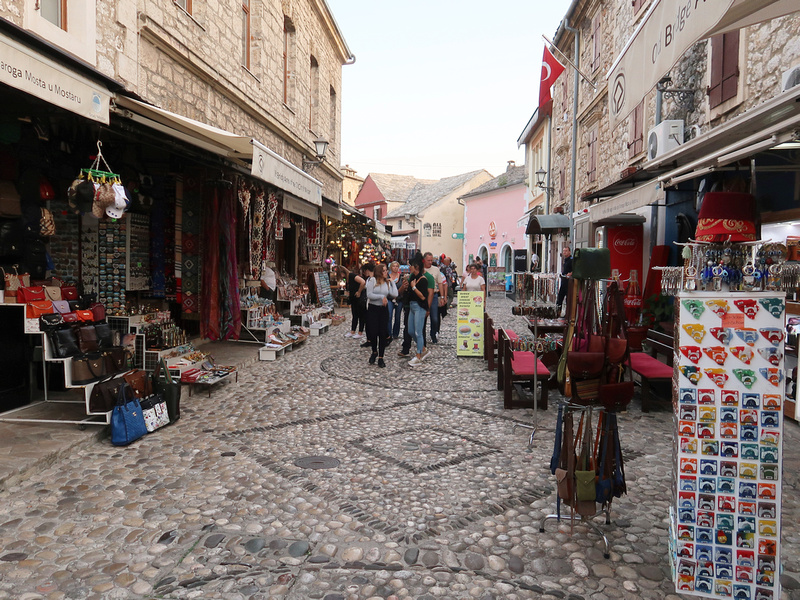 The bridge soon comes into view, and it is one of those sites that looks better in real life. 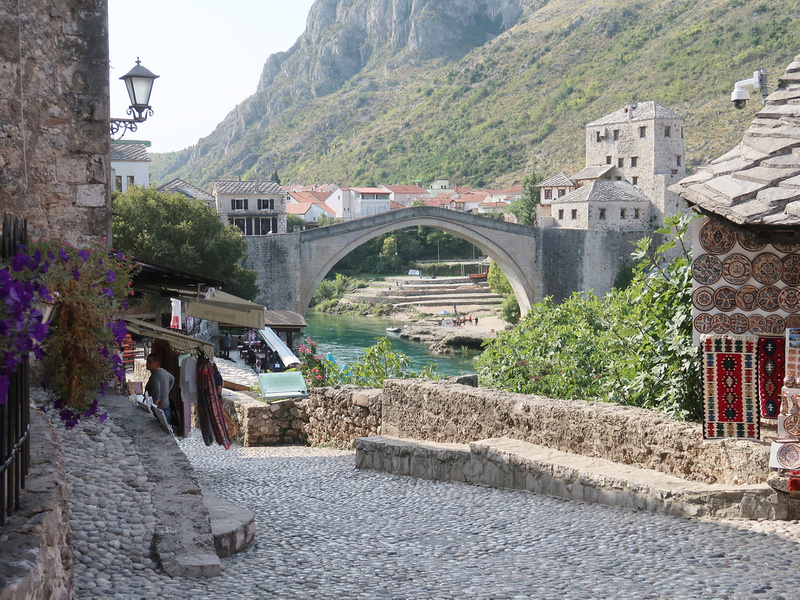 The bridge crosses a fast-flowing river in a valley that splits the city in two. The city is also surrounded by mountains, adding to the ambience that is hard to portray in pictures. The old town is charming, and I was fortunate to be here when it wasn’t too crowded. Mostar is an easy day trip from Split and Dubrovnik, but the big crowds have not restored to pre-pandemic levels. In the old town I went to Café de Alma for a traditional Bosnian coffee experience. If you want to try Bosnian coffee then it is worth coming here first to learn the intricacies in how to prepare it.

Beyond the old town, Mostar is a city of over 100,000 people, so I wanted to see what Mostar the city was like beyond its old town area. I arrived from the train station, and on the walk to my guesthouse, there were still buildings left in ruins from the war. 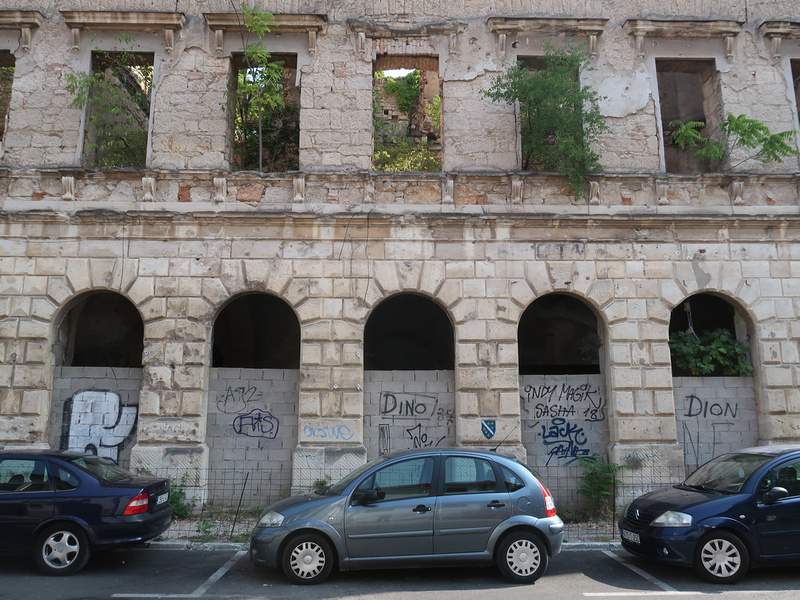 One of the most famous ruins is the Razvitak Shopping Centre. I thought this was a casino or theatre, but it turns out that this was one of the many Yugoslav department stores built in the modernist style. 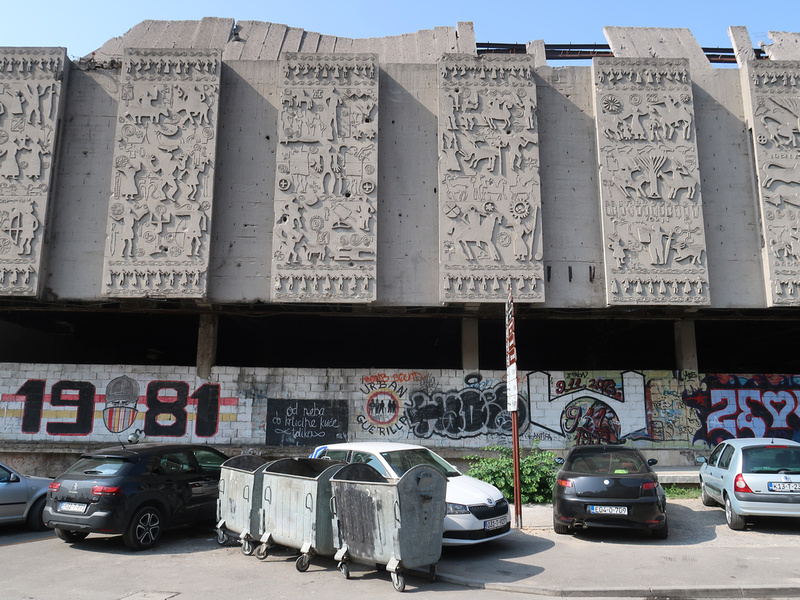 On the other side of the river is flat with more modern buildings and malls. 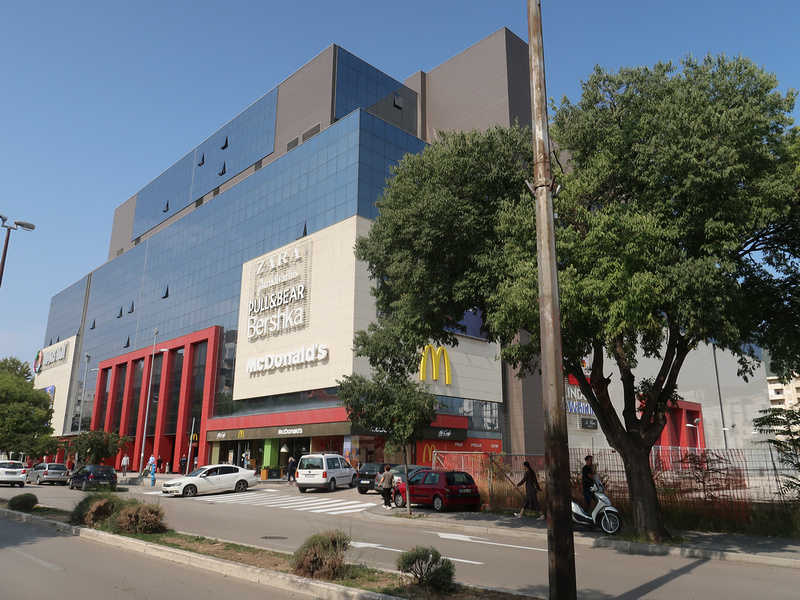 On Tvrtka Miloša street there are new apartment blocks with big murals on them, turning the street into an outdoor gallery. 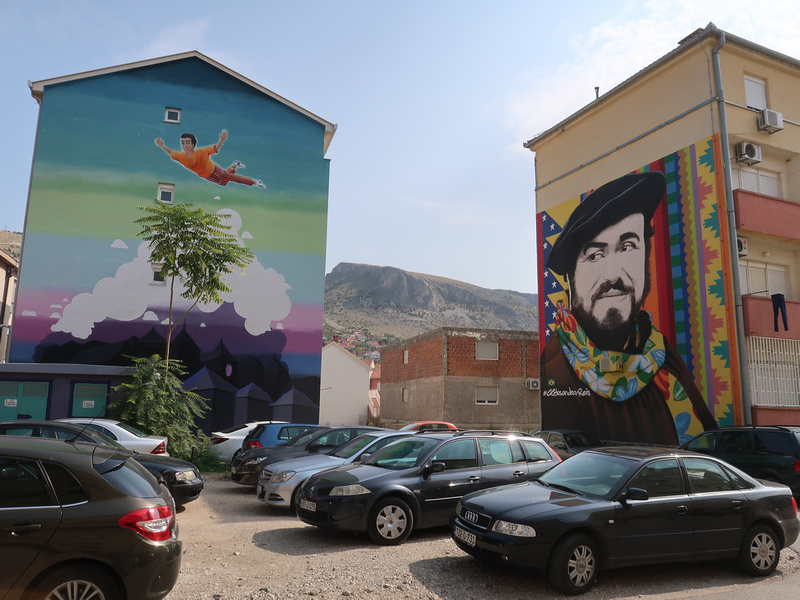 One of the old war-damaged buildings remains alongside the new buildings, giving a hint at what the street looked like post-war. 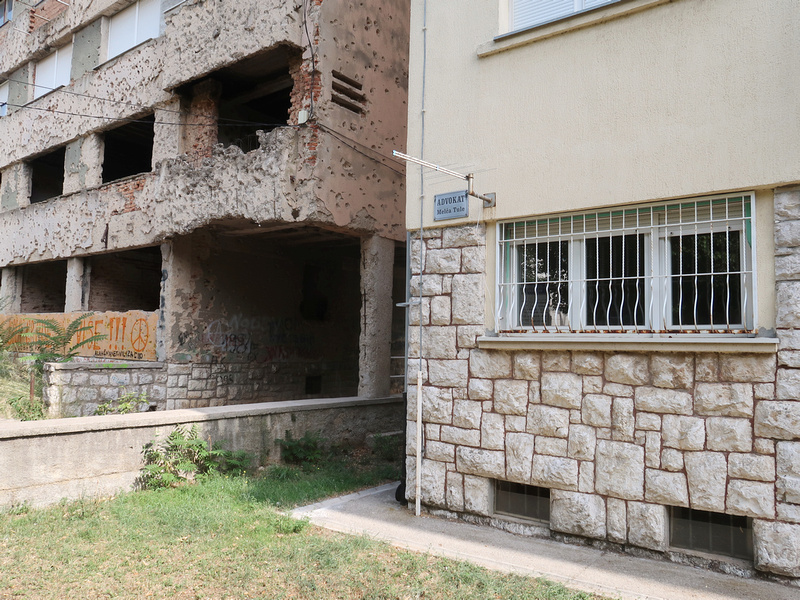 There are many tree-lined streets, and cafes with outdoor seating is a way of life here. Coffee with milk costs 2.50 BAM ($1.45 USD). 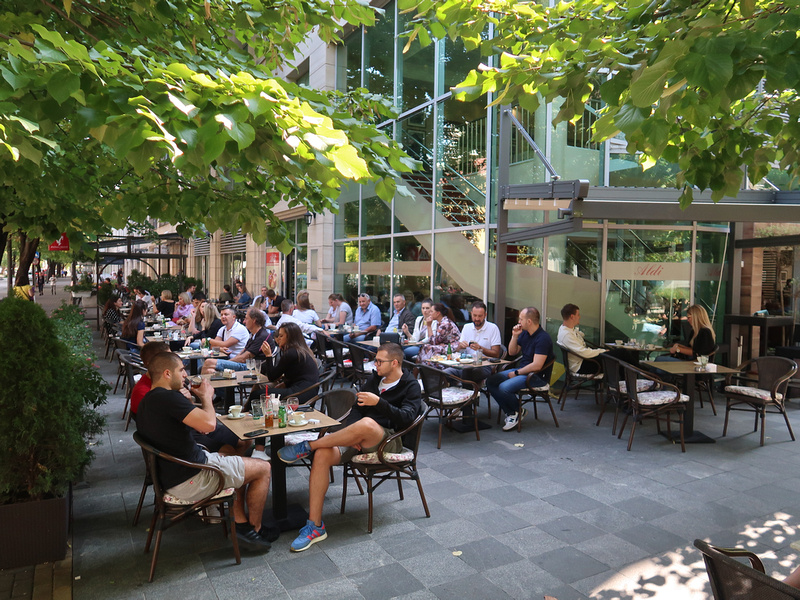 The cafes aren’t conducive to working with a laptop, but I found one co-working space if you wanted to hunker down for a while. 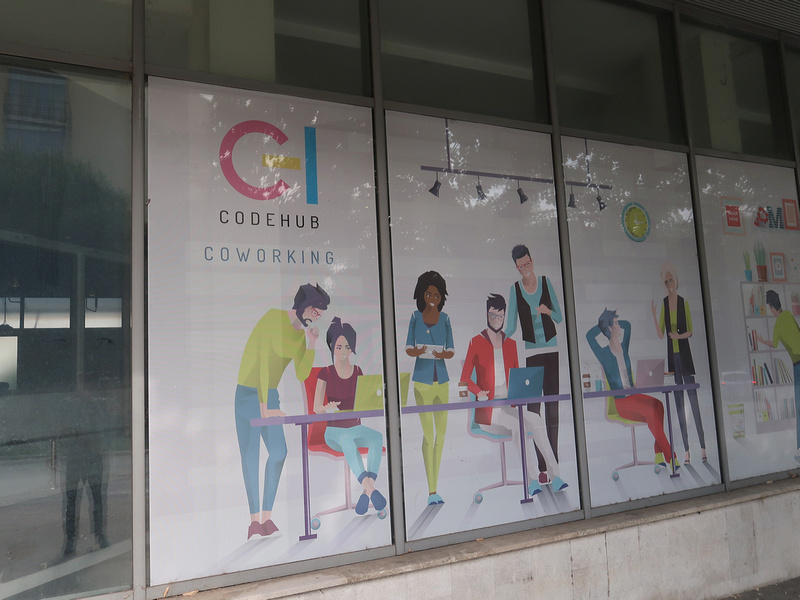 Apart from the bridge, Mostar is worth the visit for the train ride alone. The railway used to run to the Croatian coast at Ploče, but it now only runs to the border at Capljina. To experience the full length of the railway I got the train from Capljina to Mostar, but you can skip that section and just go from Mostar to Sarajevo. 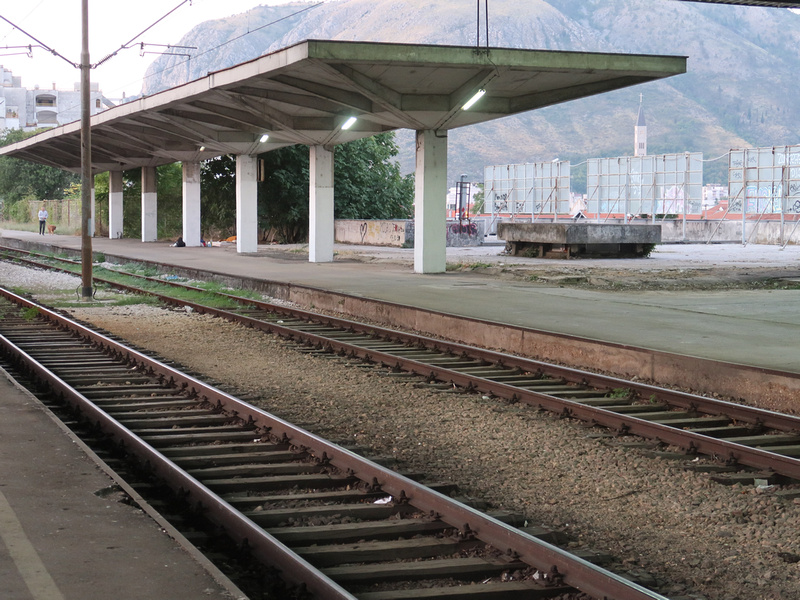 The station is much grander than the frequency of service it provides. There are only two trains a day in each direction, so you need to plan in advance. The line is used for freight from the Adriatic Sea to Sarajevo, so it is kept in good condition. I will have a separate post about the Mostar-Sarajevo railway. 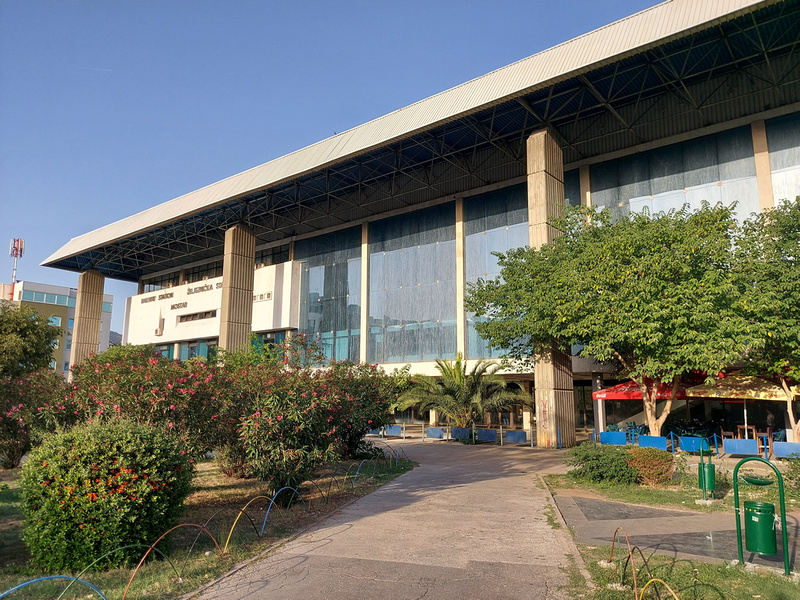 There is also an airport in Mostar, but it only has seasonal charter flights at this point. It seems like it would be a good candidate for low cost airlines, which would also make Mostar a more appealing digital nomad base.

From Mostar I got the train to Sarajevo.