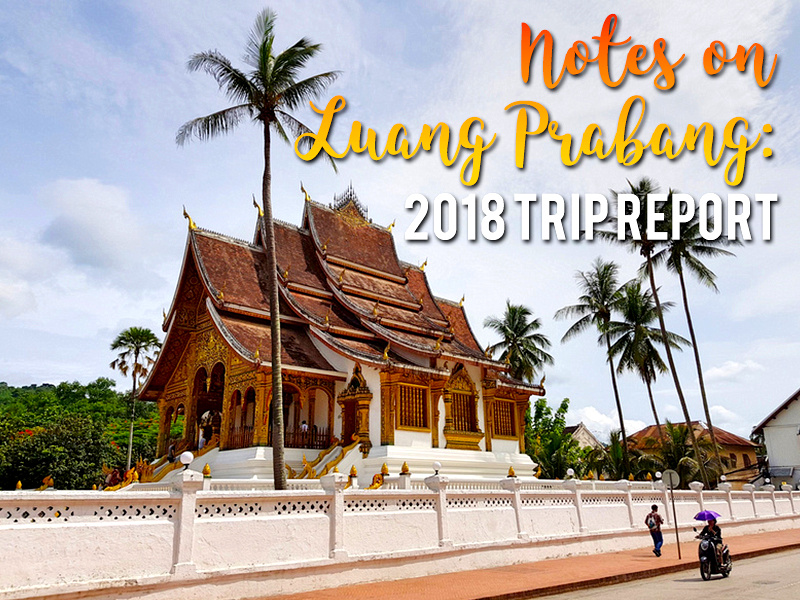 The last time I visited Luang Prabang I remember leaving sooner than I would have preferred. It might just be the most charming town in Southeast Asia. Since that trip in 2010, I’ve often thought about if it would be a good base to stay for a while. It ticks the boxes of having plenty of cafes to work from, and being surrounded by stunning mountains and rivers is good for the soul.

I’ve been putting off a return trip for years, even though it’s easier to get to now that AirAsia has flights from Bangkok and KL. I’ve also been wanting to go back to check the progress of the Laos-China Railway, which is one of the key stories of my Southeast Asia railway project. Recently I had some spare time after a Bangkok trip so I booked in a week in Luang Prabang.

Flying into Luang Prabang I already knew I was going to love it again. As soon as I stepped off the plane and saw the mountains I was wondering why I didn’t come back sooner. 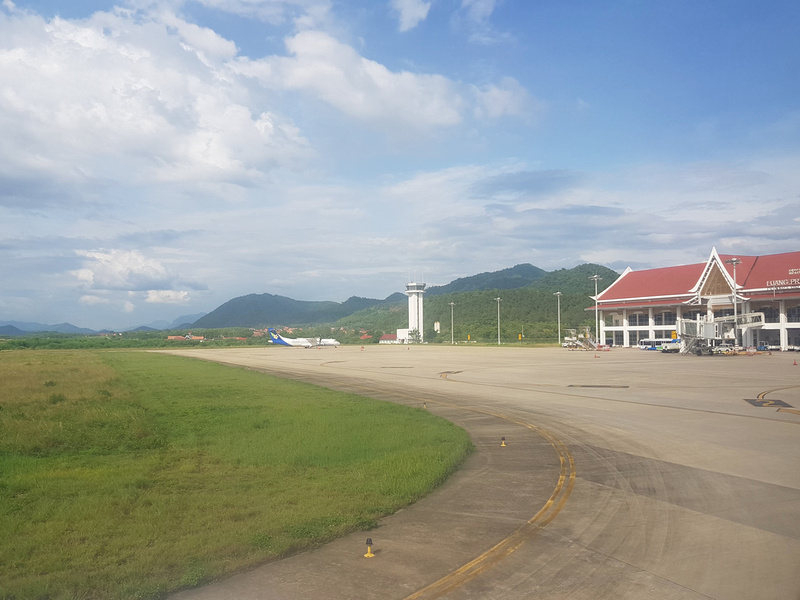 It’s not just the mountains that make Luang Prabang special, it’s also the Mekong River. The first thing I did after checking in was to get a view of one of my favourite rivers in the world. 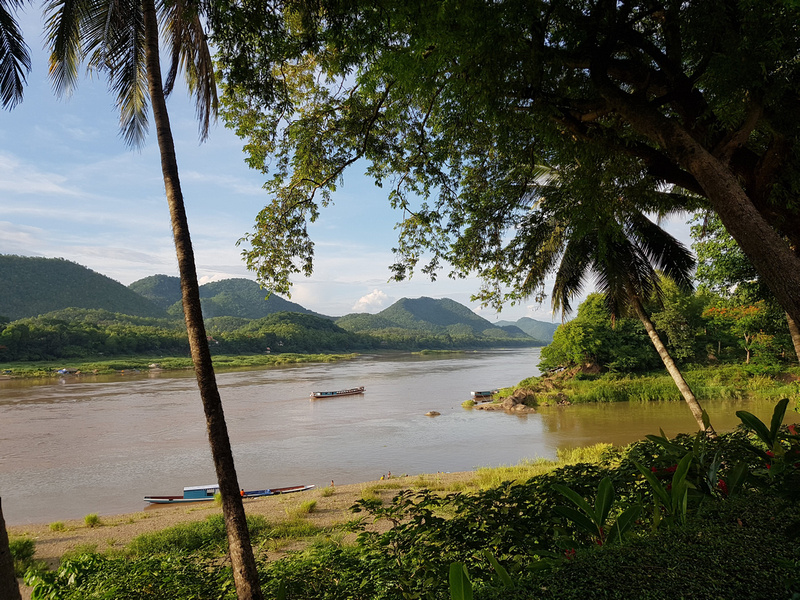 And smaller but no less beautiful is the Nam Khan river, which forms the Luang Prabang peninsula before joining the Mekong. 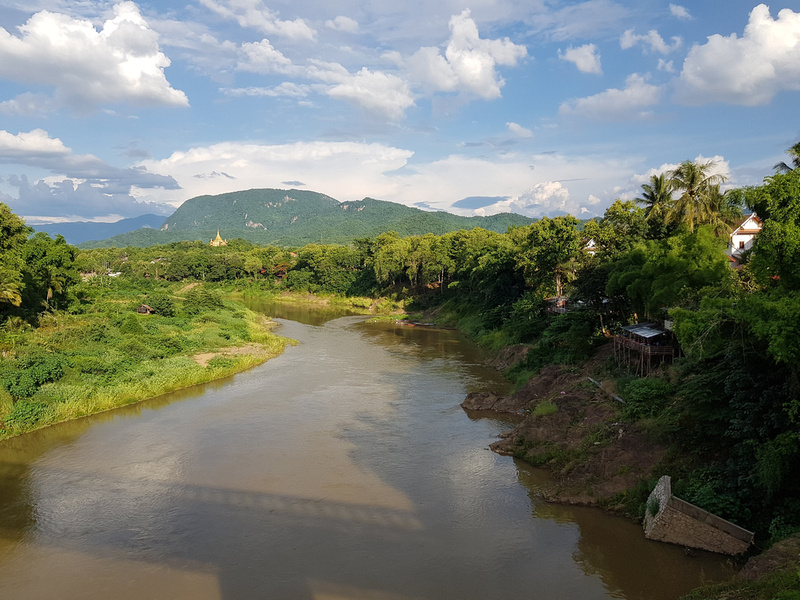 Being a UNESCO World Heritage city, Luang Prabang is protected from any major new building projects. Everything is pretty much how I remembered it. 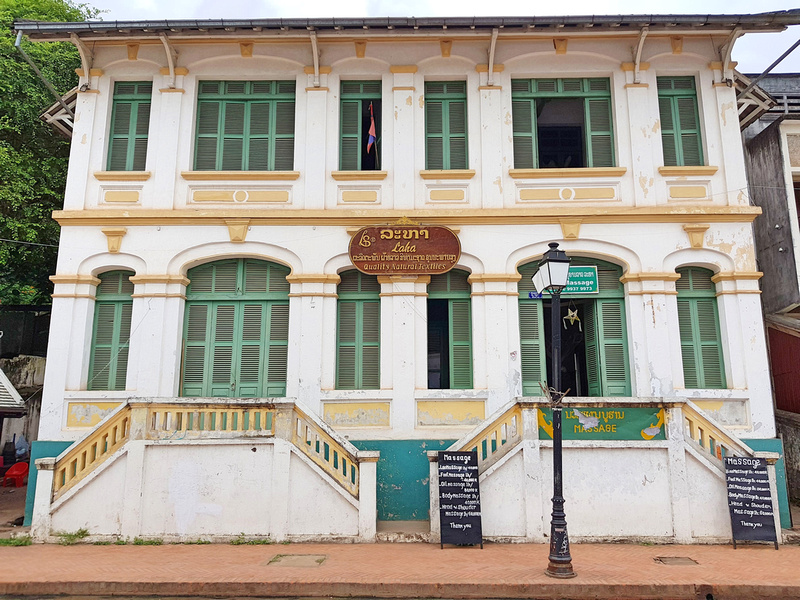 The magic of Luang Prabang is the combination of French colonial architecture sitting alongside Buddhist temples. 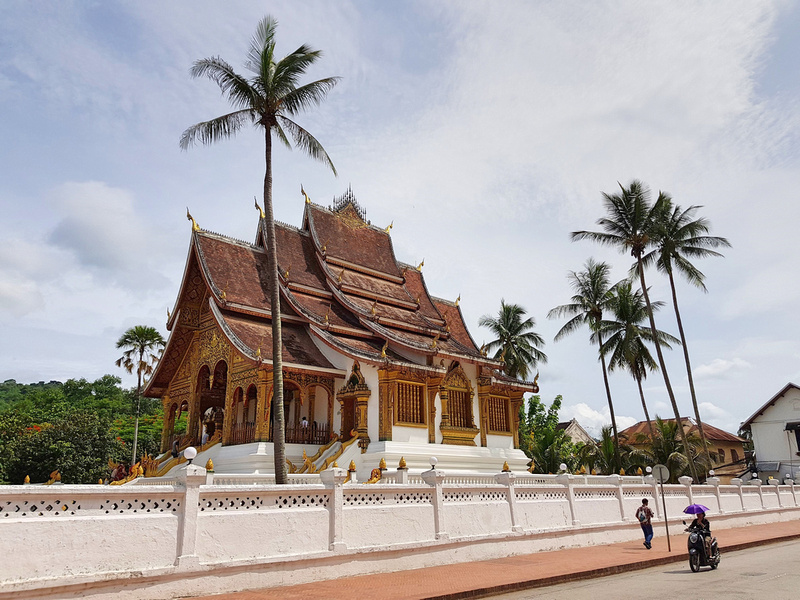 I was surprised with how few tourists there are, especially when compared with similar UNESCO World Heritage urban sites of Hoi An and Penang. I remember reading in 2010 that Laos was going to be the next big thing, but it still appears to be the laid-back place from my previous visit. 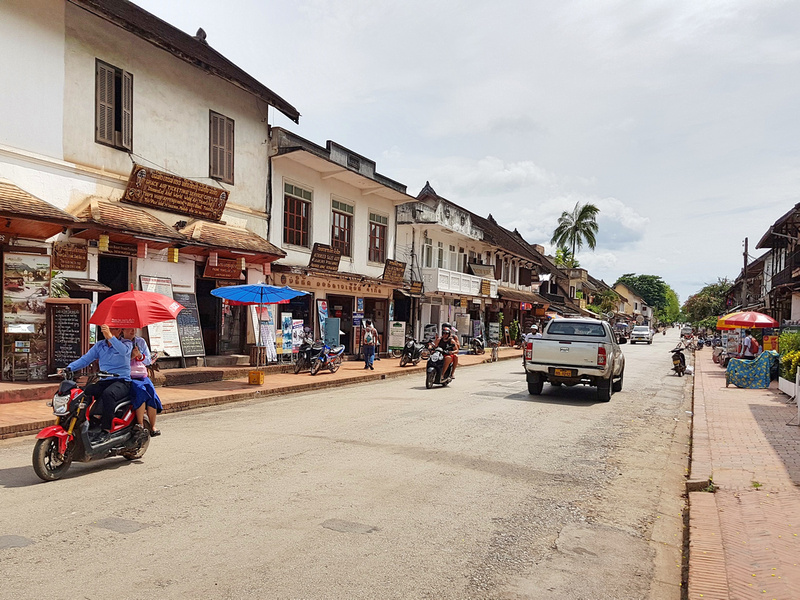 Walking around town it doesn’t seem like much has changed. There are no high rises or chain stores yet. The week I was there a Mini So store had just opened on the main street, which was the first chain store I saw anywhere. 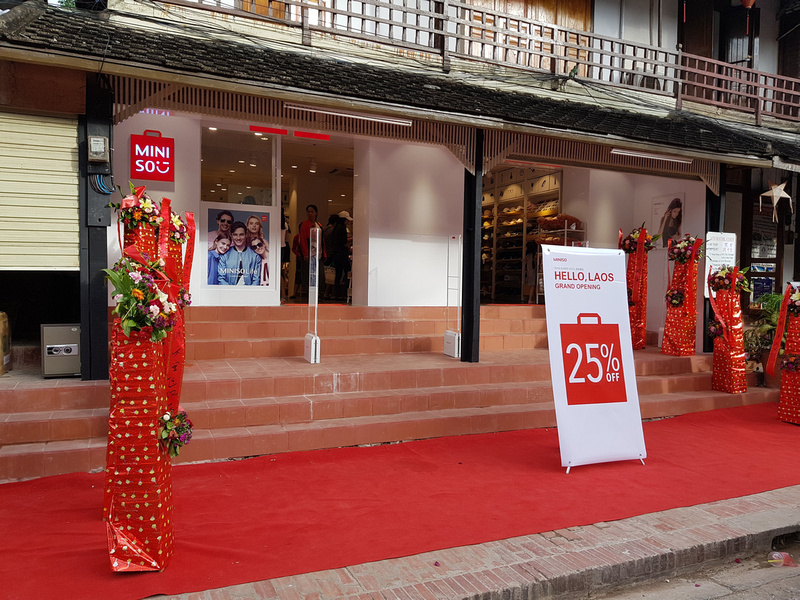 If you are going to see tourists en masse, it will be at the night market on the main street. Even that was still reasonably chilled out. 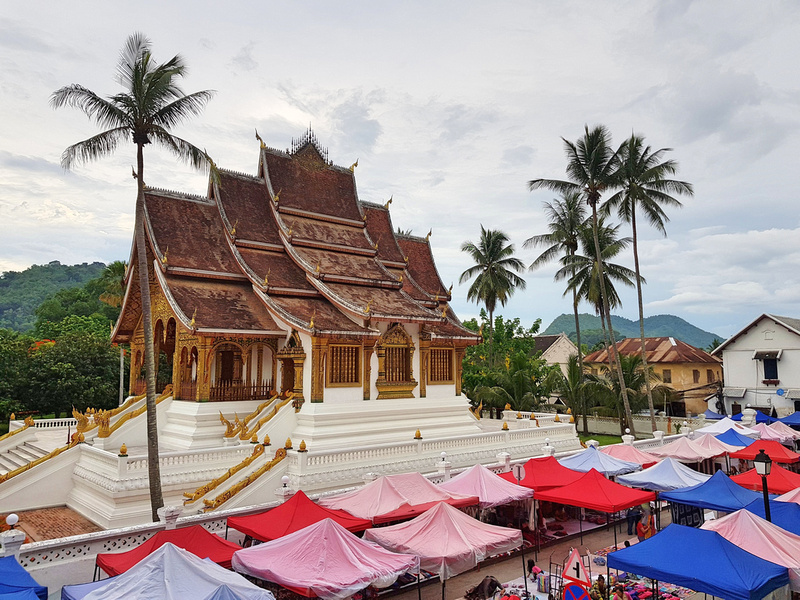 If markets selling trinkets and elephant pants aren’t your thing, then one street away from the main street you can wander a local food market. 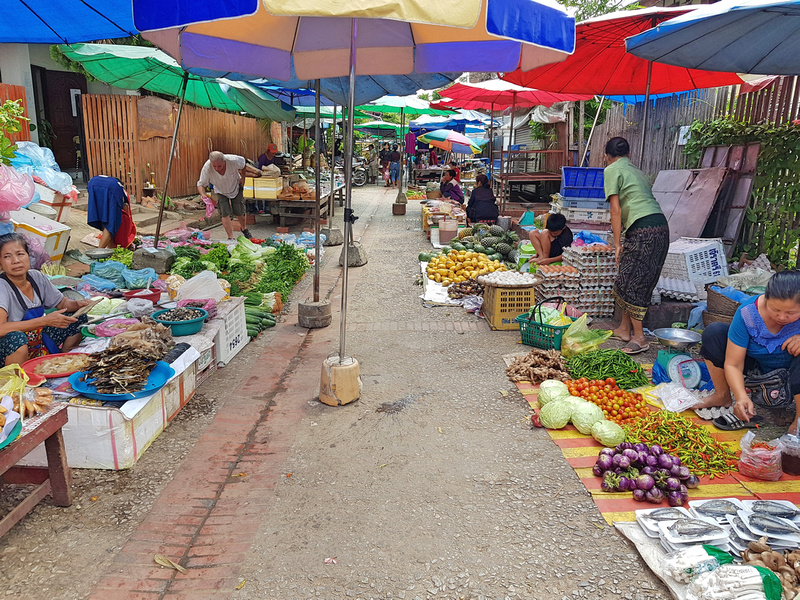 Being in Luang Prabang still feels like living in a village. No doubt someone is reading this who is from an actual village and may think that Luang Prabang is a thriving metropolis. From my Saigonised eyes though, Luang Prabang feels like a village. I arrived in mango season, and mango pickers were out on the main street without a worry of being run over. 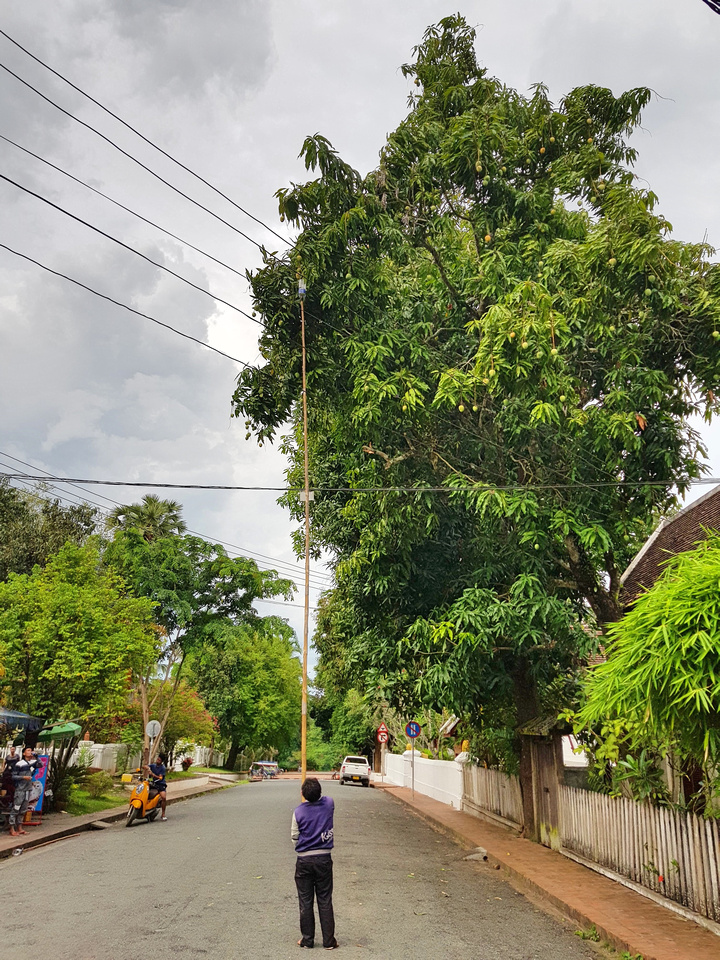 In the middle of the old town is Mount Phousi, which at 100 metres is more of a hill than a mountain. From the top you can see how low-rise Luang Prabang remains. 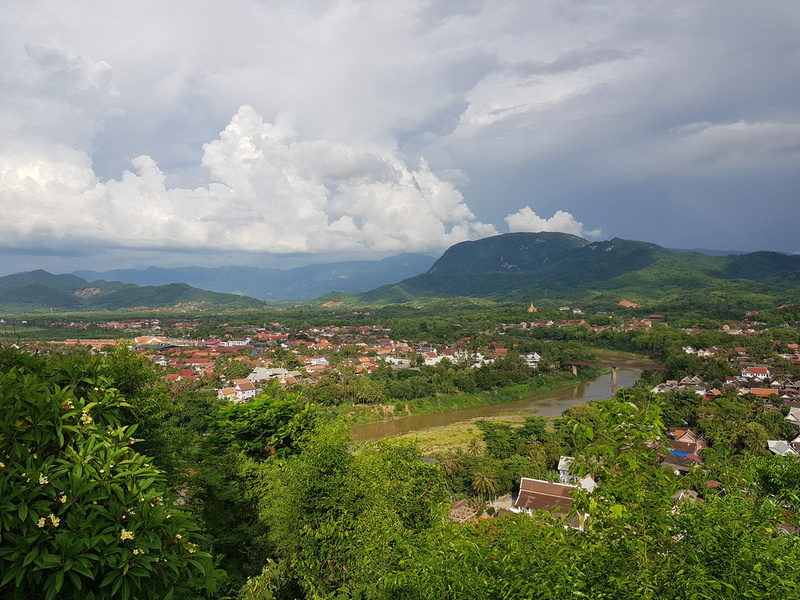 Being a small nation you don’t see a lot of Lao restaurants around the world, especially compared to its larger neighbours of Thailand and Vietnam. Like the country itself, Laos cuisine could also be the forgotten cuisine. I forgot how good Laos food is.

If you are a regular traveller to Thailand you would be familiar with som tam (papaya salad). The dish actually has its origins in Laos. It has a different taste to the Thai version, but it will still melt your face off if you say yes to the spicy version. I also got the local spicy sausage to add to the fire in my mouth, and sopped up the remaining fire juice with sticky rice. 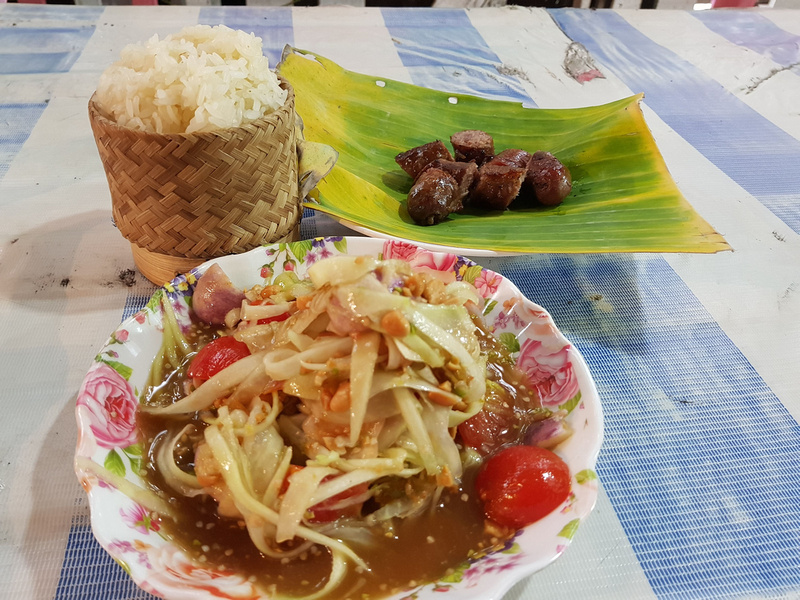 On display in this image are the simple ingredients that make a papaya salad. If you go to the food alley of the night market this lady will make you a mean papaya salad. 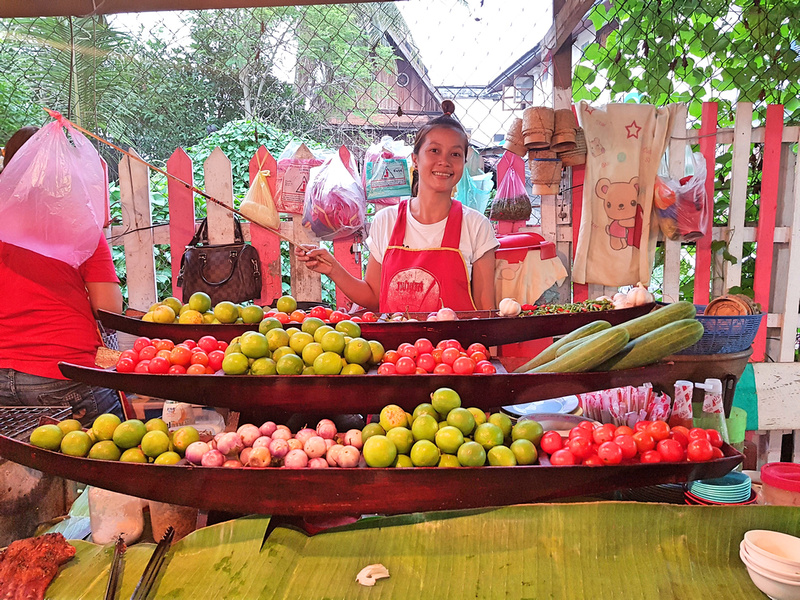 Like Vietnam, Laos is a land of great soups. I enjoyed the glass noodle soup with pork. 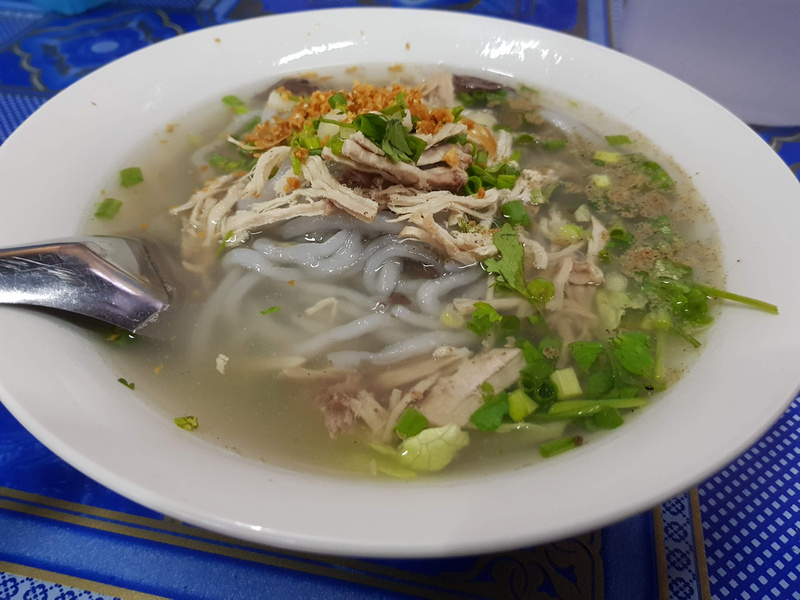 It was a delight to watch the soup lady near my guesthouse prepare soups so effortlessly. This is in an old house on the main road, near Joma Cafe (there was no address listed but that description should get you there). 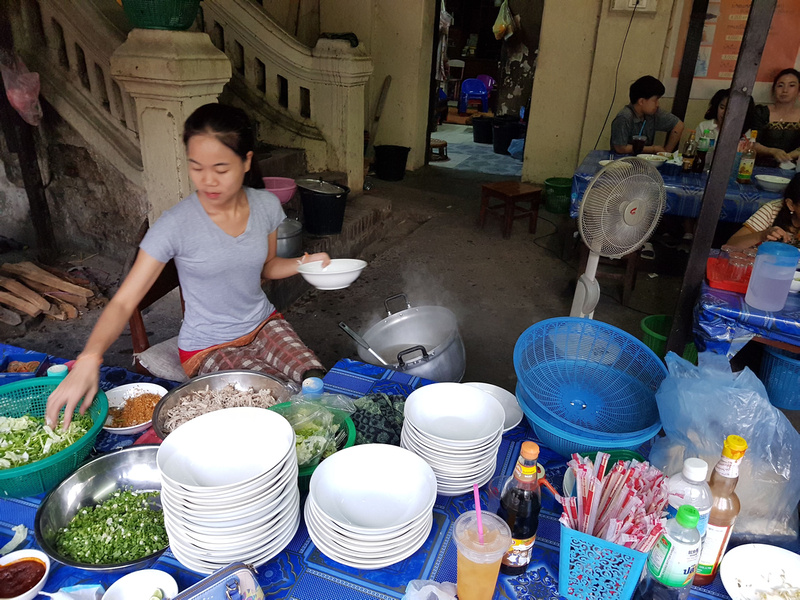 There is a Khao Soi soup in Laos, which has no resemblance to the Khao Soi of northern Thailand. 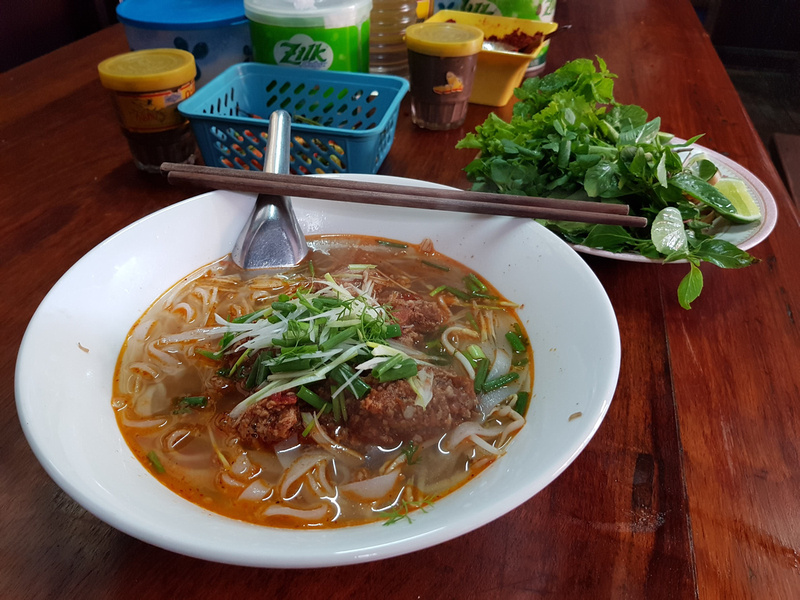 The soups are best where it’s just a stall serving one kind of soup. I made the mistake of ordering soup from a riverside cafe that had 50 items on the menu. I was hungry and wanted to sit by the river, so I knew what I was getting myself into. Save your riverside time for drinks, like this banana smoothie at Saffron Coffee. 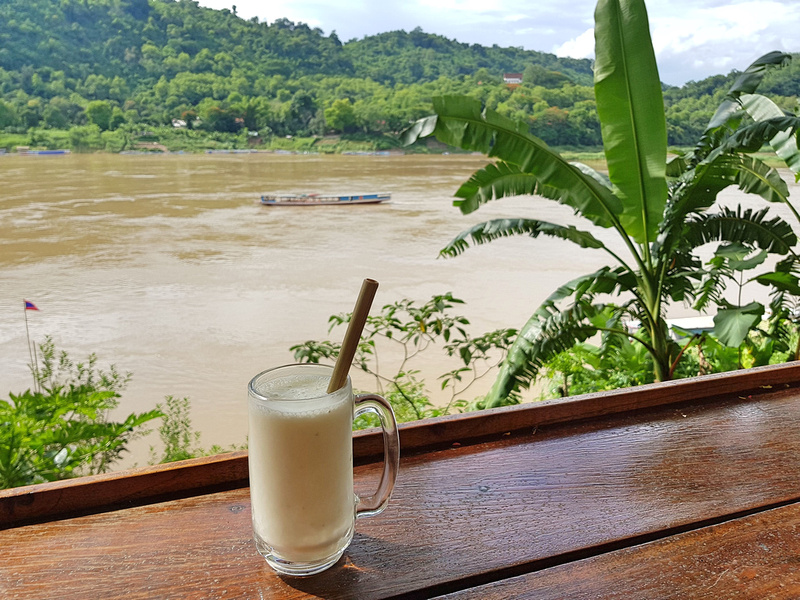 One of the reasons I came back to Luang Prabang was to visit the railway construction sites. The China-Laos railway will connect China to Thailand via 400+ km of railway through Laos. After years of false starts construction is well and truly underway.

Details of that railway Laos railways page, and future railway can be found at current and proposed railways of Laos. 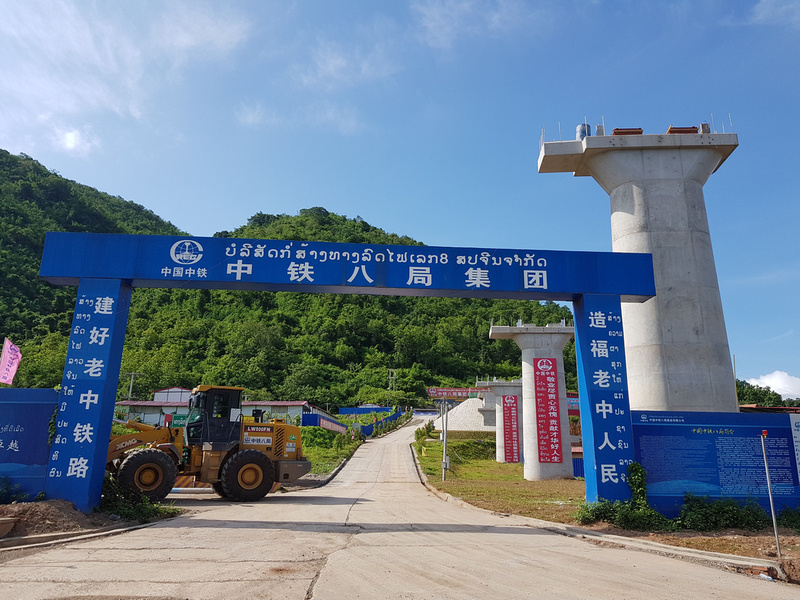 Over 60% of the railway will be comprised of bridges and tunnels. When you fly over the mountains surrounding Luang Prabang it’s easy to see why so many bridges and tunnels are needed. In Luang Prabang, there is barely enough space for a railway, plus it can’t be built near the world heritage area, so the line passes north of the airport, several kilometres from the town centre. You can see the Mekong bridge when you fly in.

Once the railway crosses the Mekong it goes through a tunnel for another 3 kilometres. I had a motorbike for a day, so I drove around looking at some of the construction sites. With the help of Google Maps, I was able to see where the tunnel exits were. 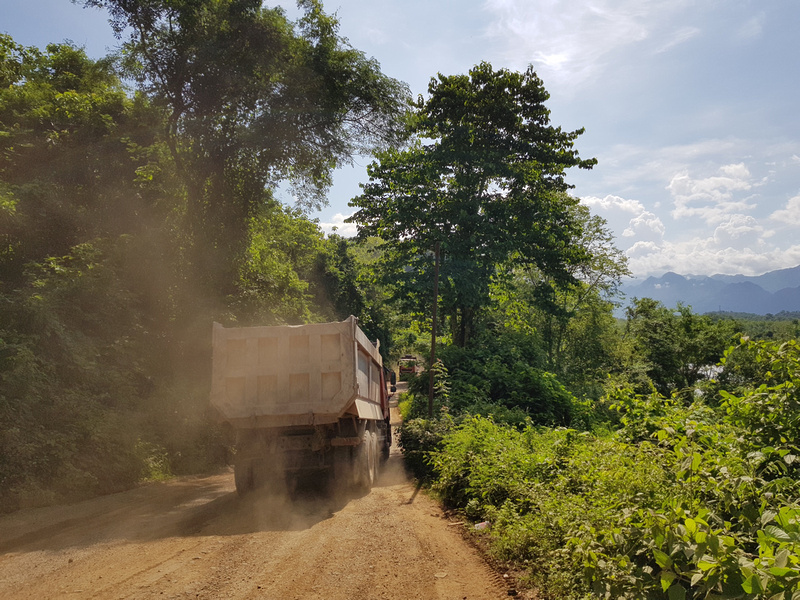 The station will be about 11km from the city centre, making a new industry for tuk-tuk drivers waiting at the new station. There was no station built yet, just a big depot for construction vehicles. 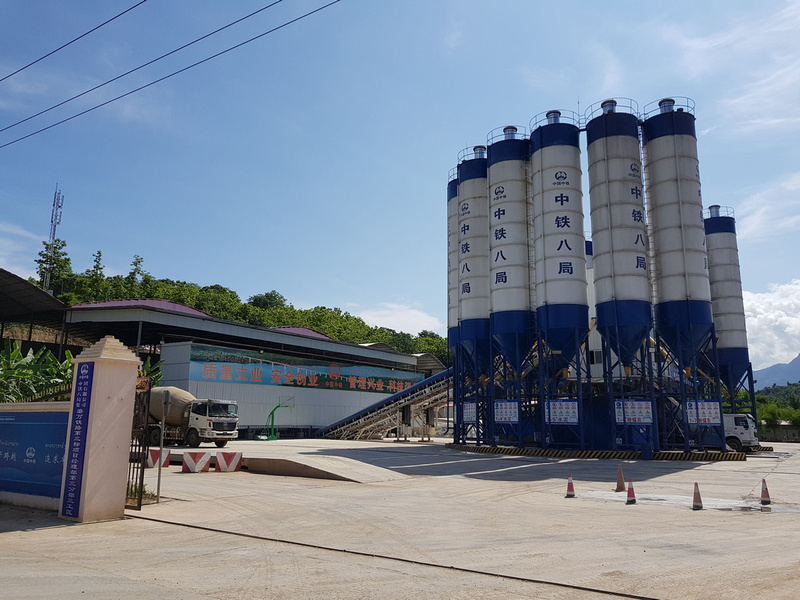 You can see where the station will be if you look at the satellite view on Google maps. Check out the rectangular area on the map, and Pha O is about where the bridge is. 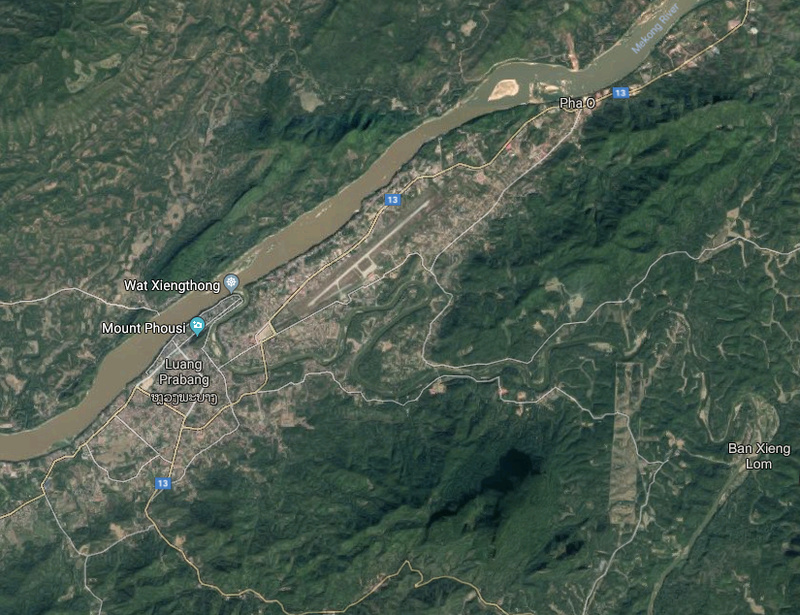 One of the common comments I read about the railway is that Laos is going to be flooded with Chinese tourists and “ruined”. While there will be more visitors, I’m not convinced that it will be a flood.

For a start the railway is on a single track, so trains have to be timed to allow opposing trains to pass.

Also, not all passengers are going to Luang Prabang. For passengers from China, they could be getting off at any point between Kunming and Bangkok.

And the railway will cannibalise domestic bus travel. With the express stops at Luang Prabang, Vang Vieng, and Vientiane, the train will become a more comfortable journey compared to the current bus and minivan options. I could see it being so popular that you have to book in advance.

The railway might also present new opportunities for the stations in between the express stops. There are 4 express stops out of the 21 stations planned initially, with 33 eventual stations. Towns that tourists just passed through on a bus might become new tourist destinations if developed properly. Maybe a small stop has some scenic hiking paths nearby, and that town is waiting to become the new Vang Vieng. I hate bus journeys, but give me a train and I might be compelled to get off at a random town and have a look around.

Another thing that hasn’t been mentioned yet is that this railway is going to become one of the world’s most scenic rail journeys. Sure, there are lots of tunnels where you won’t see anything, but then you burst out of a hole in the side of a mountain to see the scenery of northern Laos. 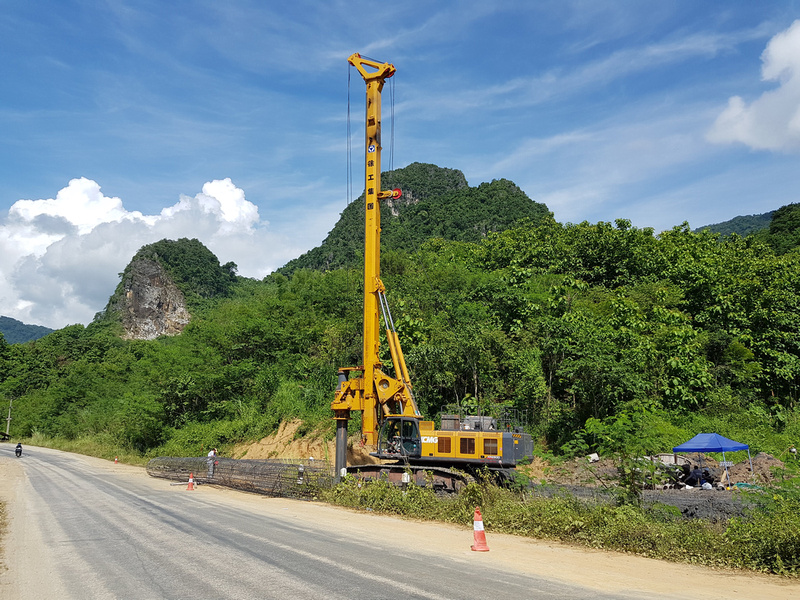 I recall reading that Luang Prabang will be flooded with tourists when AirAsia started flying there. So far it hasn’t happened. On my way out there was a China Eastern flight to Kunming waiting at the airport. I would be more concerned about more flights. If Luang Prabang started seeing the amount of flights that Siem Reap gets, then there would be reasons for concern about overtourism. 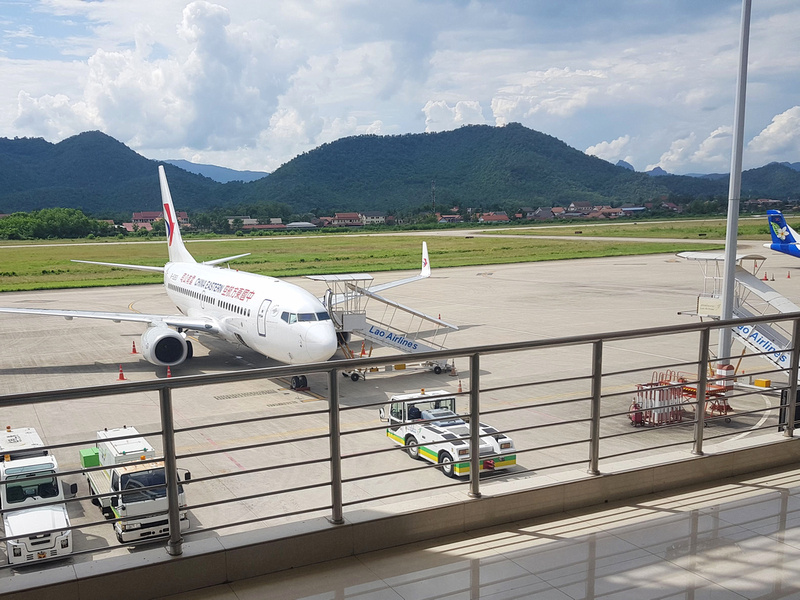 The bigger concern of the railway is how much debt Laos has taken on to pay for it, and how much cheap land have they signed away to Chinese interests near each station. The railway will be a great benefit for domestic travel, but not so much for the economy if all the trade is being done via foreign businesses. There is also the concern that the railway will become another Hambantota Port, which Sri Lanka leased out to China on the cheap after being engulfed by debt. We shall see what happens.

After checking out the railway sites I did some sightseeing. Laos is an amazing place to go motorbike riding. There is hardly any traffic and the scenery is jaw-dropping. I would literally sigh to myself whenever I caught sight of another stunning mountain scene. 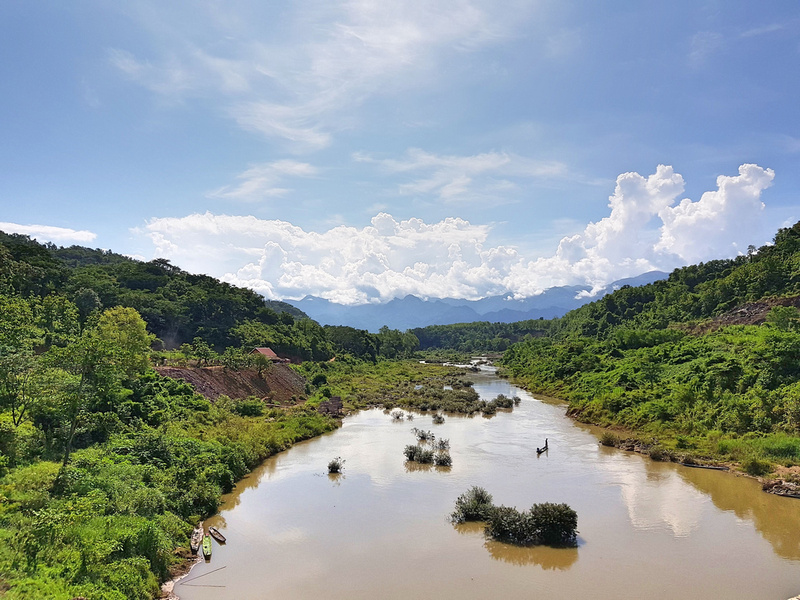 Not far from the Luang Prabang station site is the Tad Sae Waterfall. I wasn’t planning to go but seeing it was just down the road I went anyway. Even though rainy season had begun it’s not until the end of rainy season that the waterfall fires up. I didn’t know this until I was there. I was greeted by this rather sad looking waterfall. 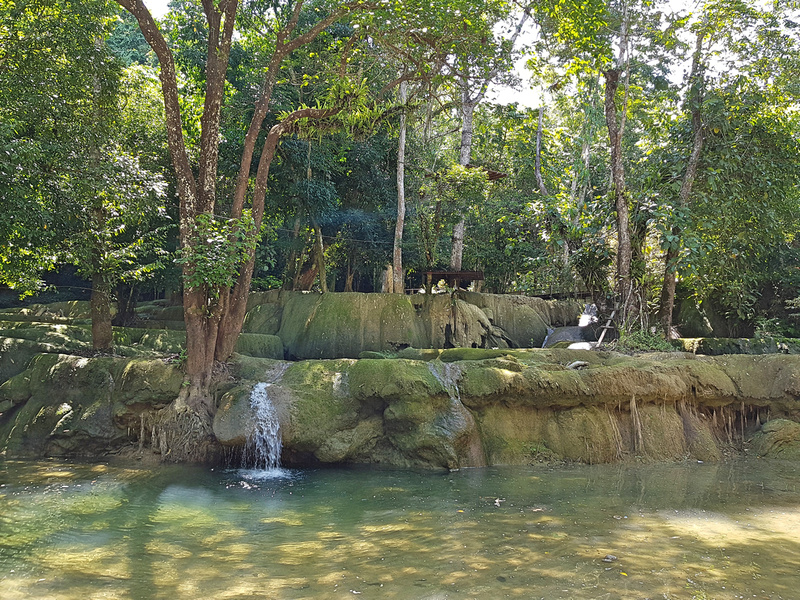 To make up for such a disappointing waterfall my next stop was to be Kuang Si. I got back to my bike and the ignition wouldn’t turn. I kept jiggling and trying different combinations of pushing the key in, to no avail. Other people came and had a go, so it wasn’t just me not knowing how to do something simple like start a bike. 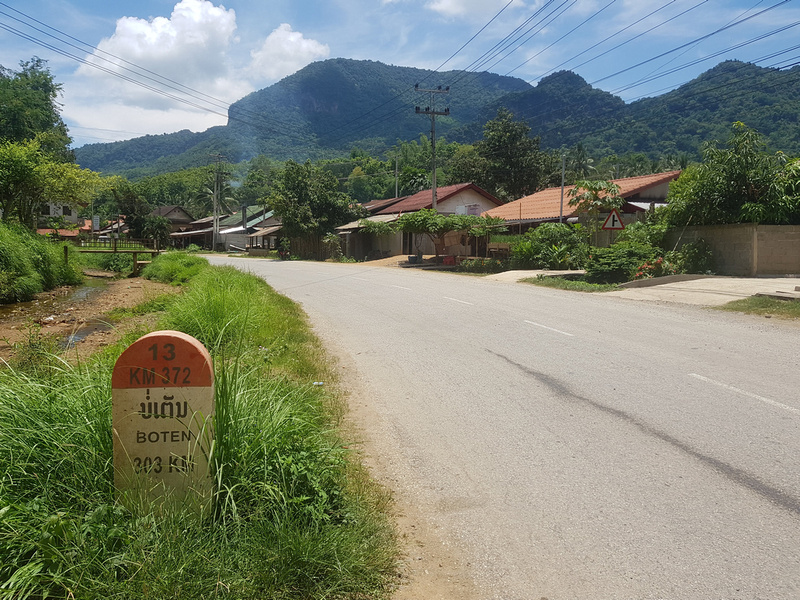 I rented the bike from my guesthouse, and the guesthouse owner was a cool guy who didn’t cause any drama. He drove me back to where I left the bike, and during the half-hour drive, I discovered he is from Vietnam, but living permanently in Laos.

We got to the bike and I was nervous that the bike was going to start straight away, making me look like an idiot, but he couldn’t get it started either. We somehow put the bike in the back of his vehicle, with the end sticking out of the back. By the time we got back, he offered me another bike so I could see the other waterfall. I was done with bikes at this point so I retired for the day.

At the time of my visit, the railway construction was one month ahead of schedule and is due to be finished by the end of 2021. As an embarrassing comparison, the first metro line in Ho Chi Minh City began construction years before this project, and it is now delayed beyond December 20121.

Here is my guide on where to stay in Luang Prabang.