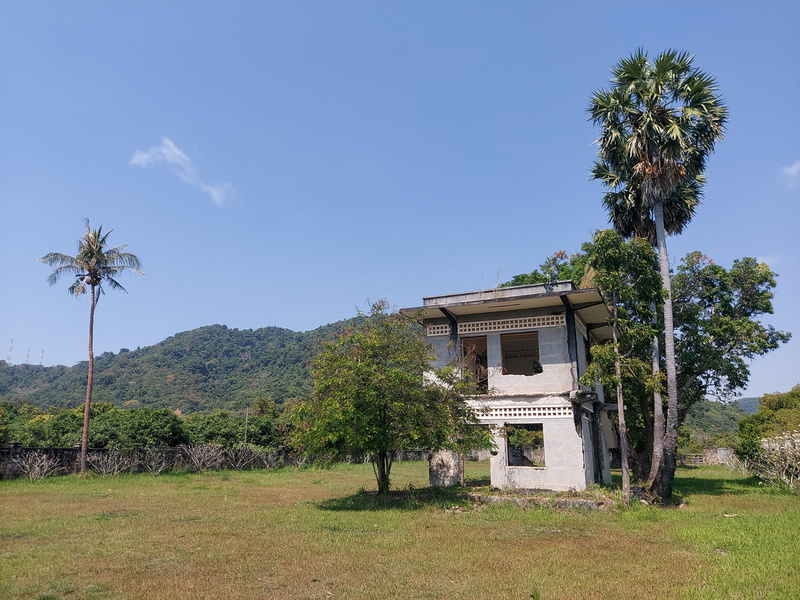 [Kep Province, shown within Kampot and Cambodia (map via Wikimedia.)]

I’ve not found an explanation why a new province this small was required, but Kep has a different vibe to Kampot so I have made a separate article from my Kampot trip report.

I did a day trip to Kep from where I was staying in Kampot. I know of some expats who live in Kep and prefer the laidback vibes of Kep (which is even more laidback than Kampot). The main drawback of Kep is that it is not walkable, so for that reason, I have never stayed there.

Map of Kep, with places mentioned in this article marked.

Like Kampot, Kep is going through some big changes. I rode a scooter to Kep, and on the way there I passed countless trucks hauling dirt. One of the road lanes was blocked off for exclusive use of these trucks.

I drove to the first place where I could see the sea, and found out why there were so many trucks; the seafront was being filled in with landfill. 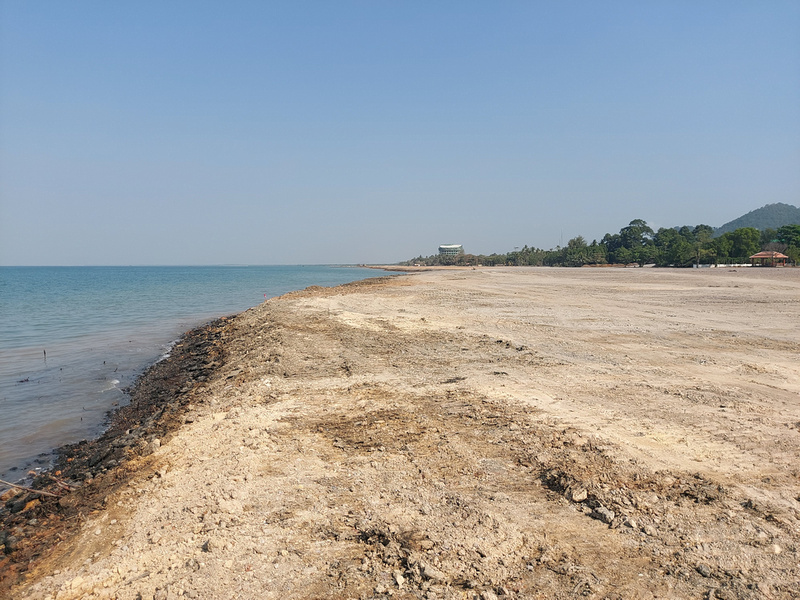 I parked my scooter next to the Kep Sailing Club, which used to be a seafront property (a logical place for a sailing club). The sailing club has now lost its seafront front view and is now at least 100 metres inland. 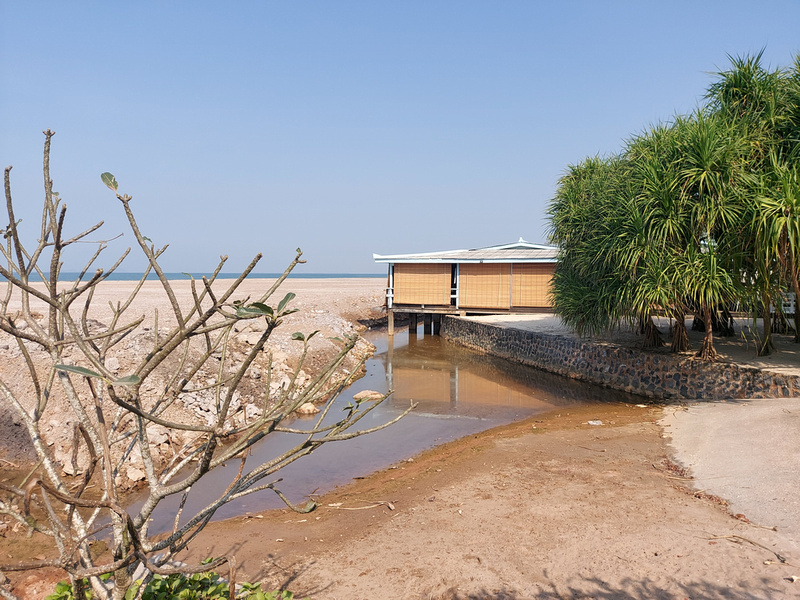 Seafront resorts such as the Knai Bang Chatt are now inland. 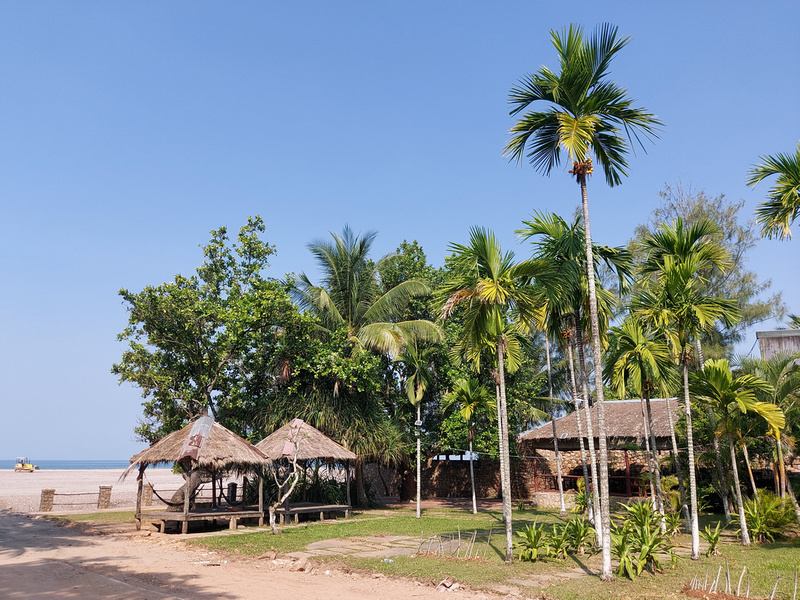 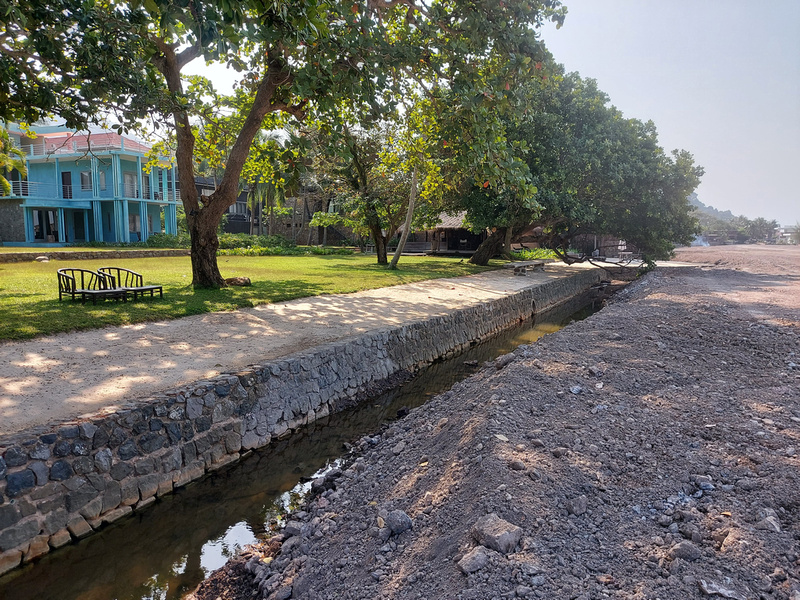 The landfilling is part of a plan to turn a 2.7 km stretch of the seafront from the Kep Market to the Mangrove Protected Forest into a new park. 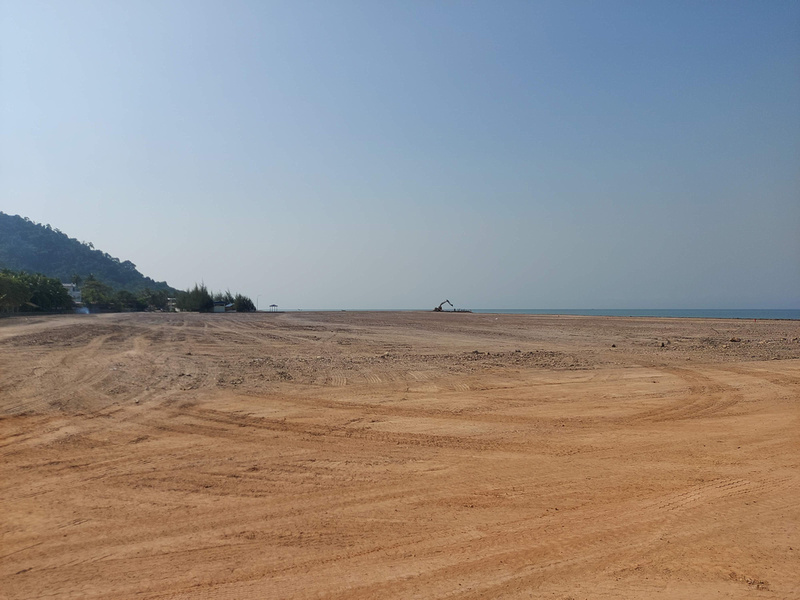 Considering the huge cost of filling in the sea, (not to mention the environmental cost of moving earth from the mountains to the sea), I thought that there must be a developer building a new city here. How else would they recoup the cost of such a massive undertaking?

People have just been assuming that it must be a Chinese mega project or something like what is happing nearby Phu Quoc in Vietnam. The landfill is going to be a new park and beach.

[Map of the beach expansion project.]

Here are some more details on the Kep beach expansion and other projects. 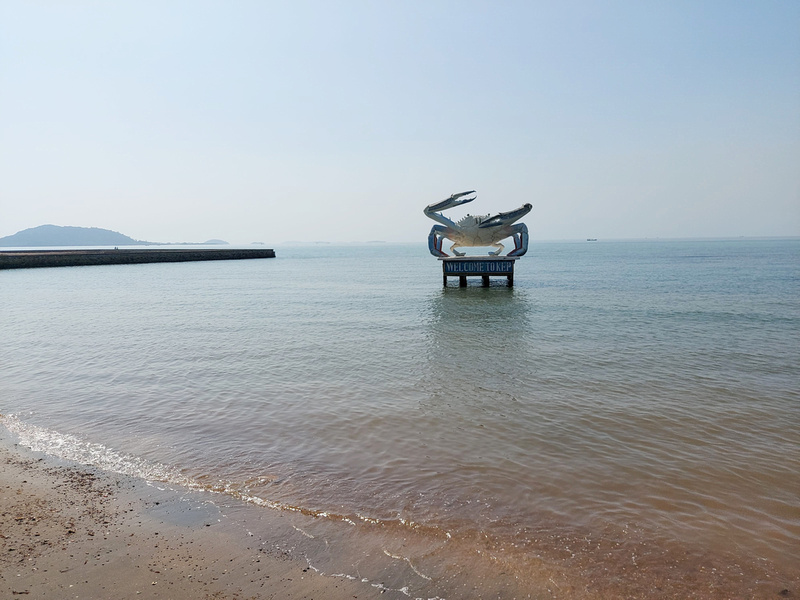 Kep is well-known for its crab market, where you can get crabs served with the world-renowned Kampot pepper from one of the crab shacks overlooking the gulf. 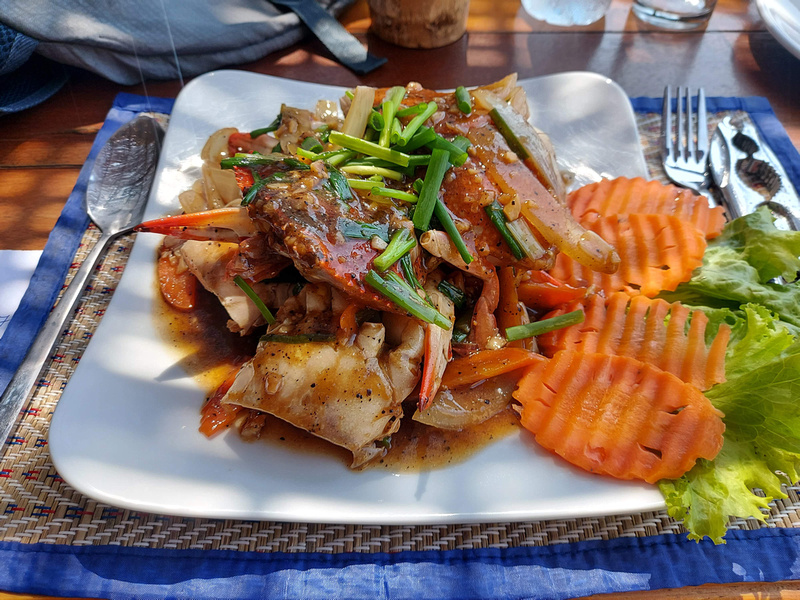 It’s also just a great place to wander around for the sensory experience of a Southeast Asia food market in full flight. 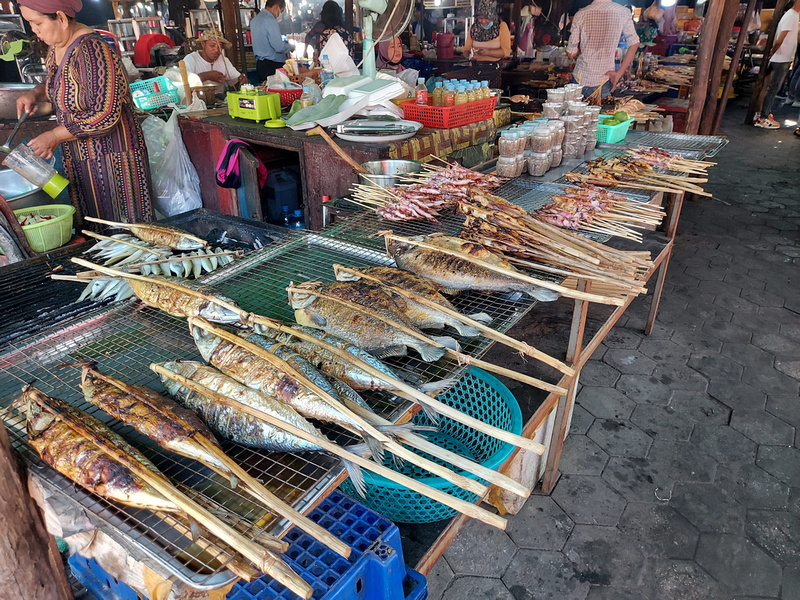 It is at the crab market where the landfilling project starts. The seafront market is now an inland market. 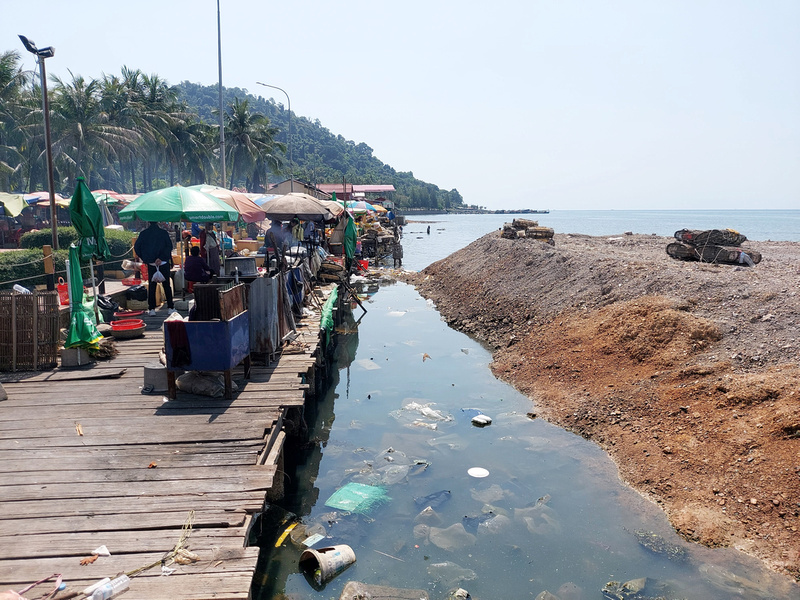 At the time of my visit (in January 2022), there were trucks and earth-moving equipment extending the land out to sea. 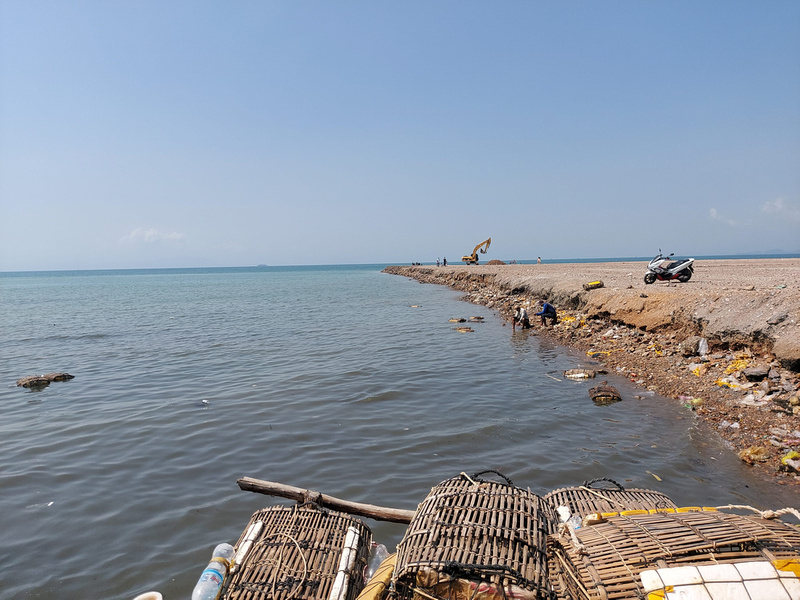 All the seafront crab shacks are no longer seafront. Will they be moved to the new seafront? 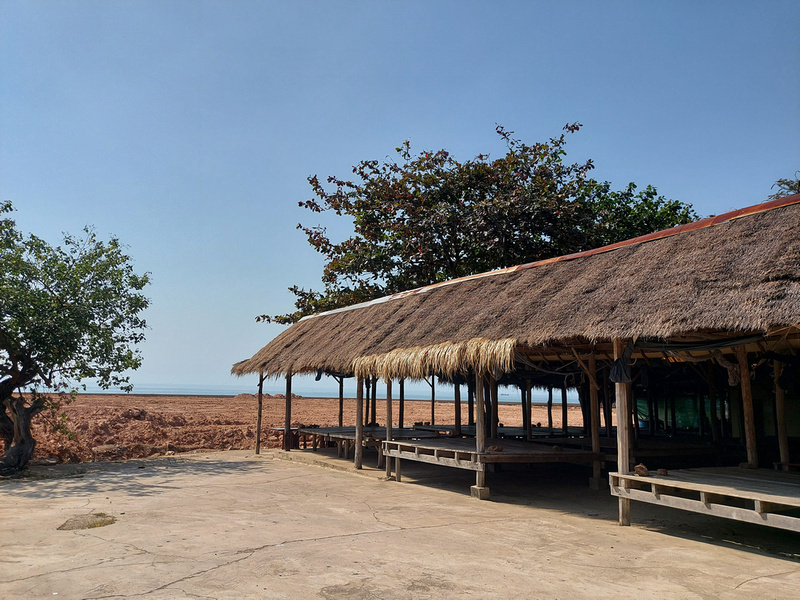 Kep is no stranger to artificial beaches. Kep Beach is an artificial beach, and true beach aficionados would be able to spot that is not a proper beach. It’s nice enough, and if you live here it is great, but you wouldn’t go out of your way to have a beach break here when you have better beaches in Sihanoukville and Koh Rong. 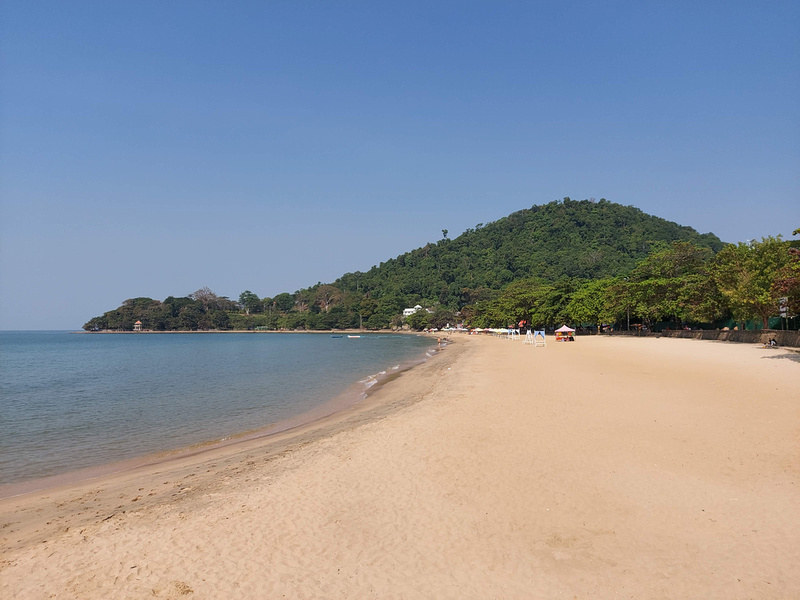 I was interested in the design of this elevated sandbox, which I have seen on fake beaches in Albania. In the future when sea levels rise, this is what beaches will look like. There will be fortified walls along the coast with these boxes of sand to recreate what we used to have. 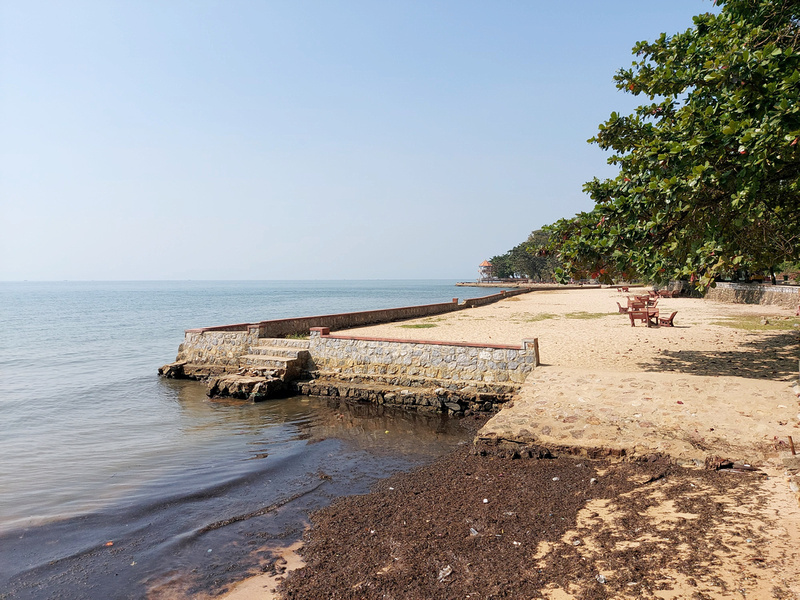 The other thing that Kep is famous for are the abandoned villas and mansions.

Kep was a happening place in the the 1950s and ‘60s, with royalty and well-to-do populating the upmarket villas of Kep Sur Mer (Kep-on-Sea). 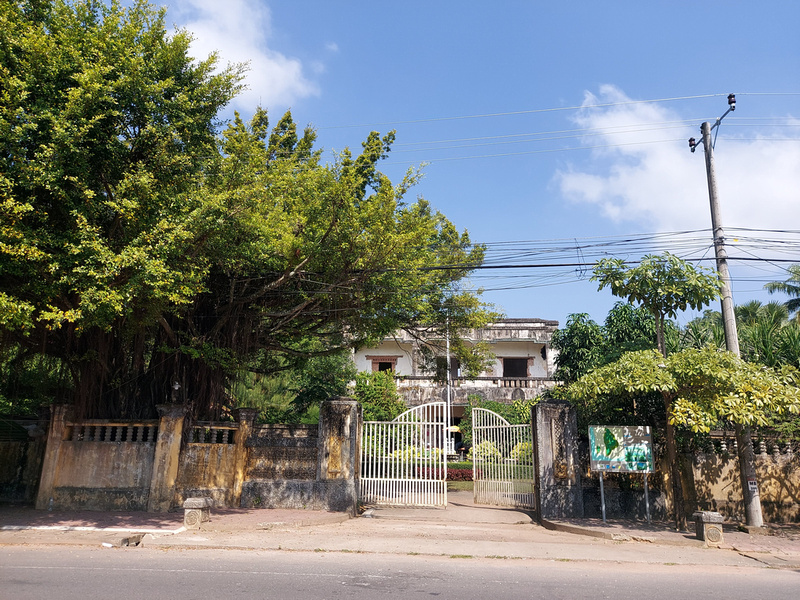 That all ended with the rise of the Khmer Rouge, and Kep was almost completely deserted. Here are some good trip reports here and here about the villas.

As much as I love walking around, you need a bicycle/scooter to see all the villas here as it is too spread out. 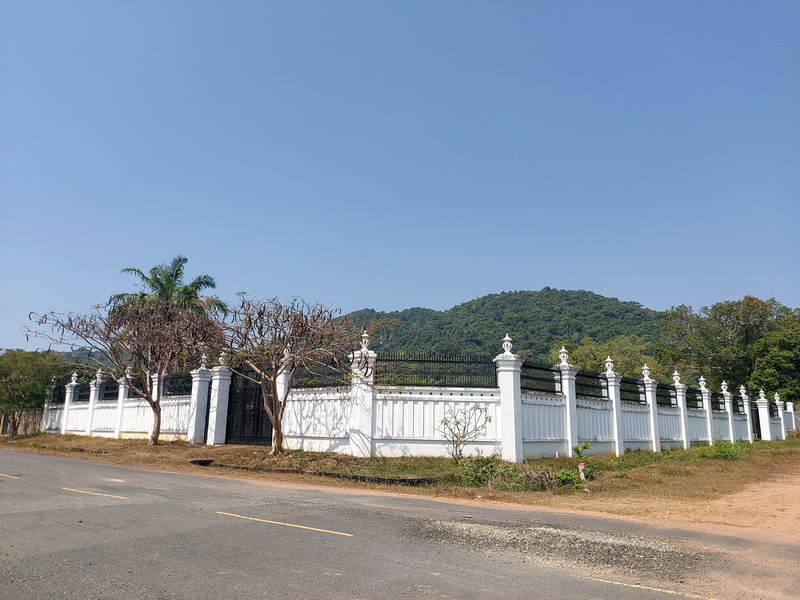 The thing that intrigues me about Kep is its street grid.

It has gridded-out streets like Kampot, yet somehow Kep is unwalkable. Part of it is that the blocks are so big with nothing on the land. 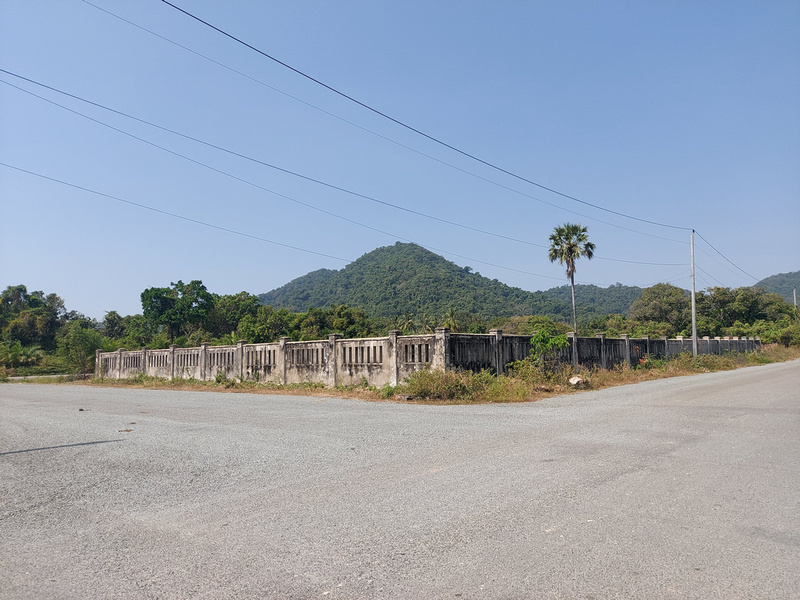 Kep has good bone structure, so a proper city could be built here without needing to build more infrastructure. I wondered what these empty blocks would look like if they were filled with shops and houses like in Kampot. Many of the streets still have big trees, making for a more pleasant environment. 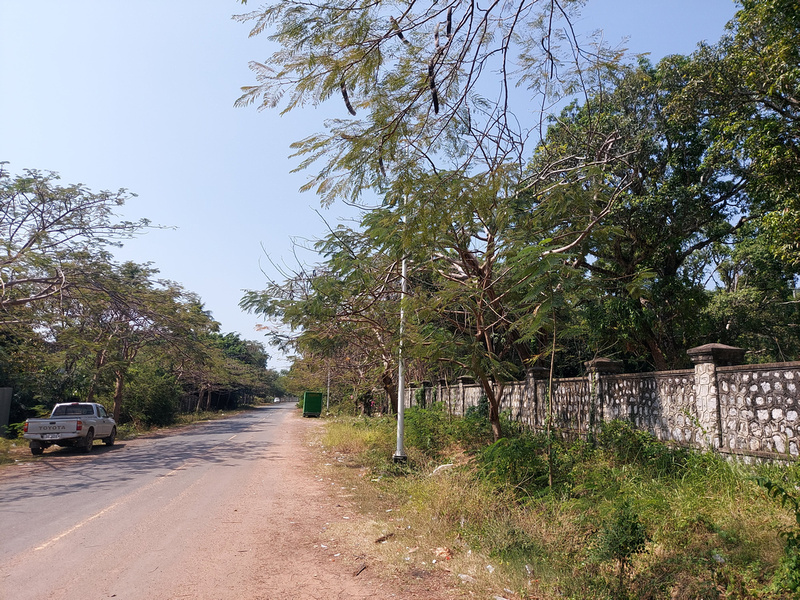 The thing with Kep is that it feels ghostly. I know some of my friends are ghost sensitive in this part of the world. I like to think that I am not (though you will never catch me camping overnight in a cemetery!), but I feel something in Kep. It might just be sadness of seeing ruined villas and knowing the history of the city and country.

These empty blocks surrounded by big trees suggests that there was something substantial here before. 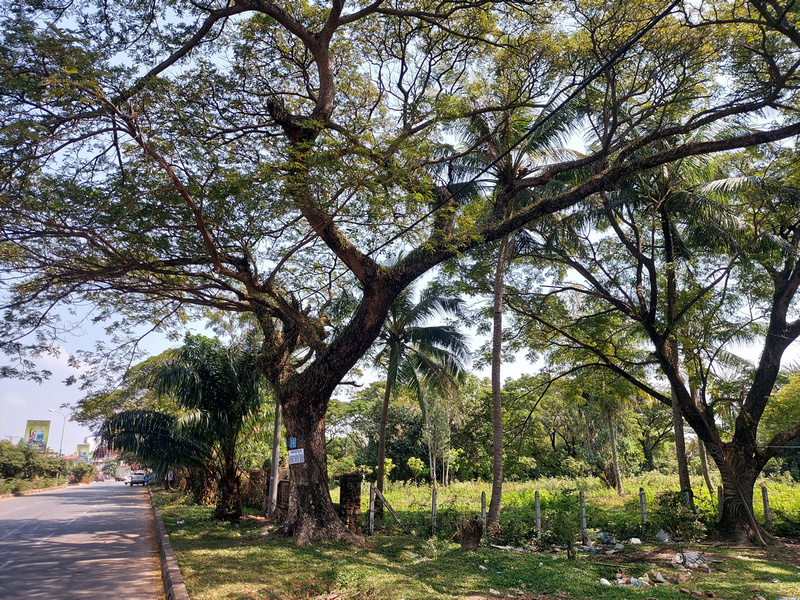 It is within this grid area where you can see the Kep Independence Monument (similar to the monument in Phnom Penh). 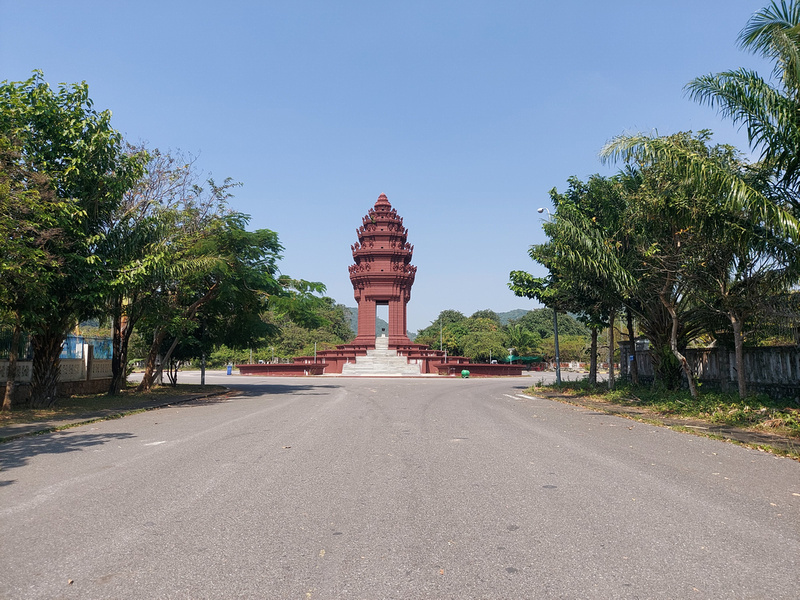 Near the Independence Monument is the Cambodia-Vietnam Monument, which was inaugurated in 2018. 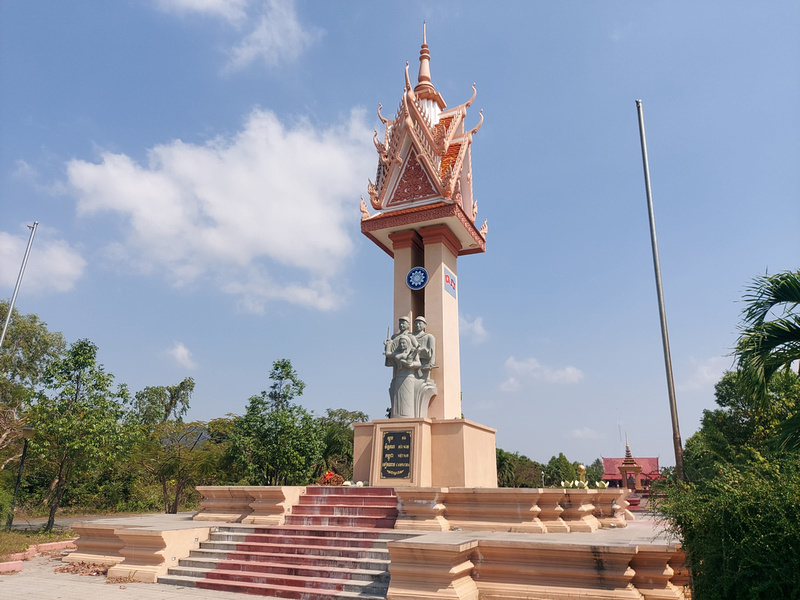 There are some random hotels in this gridded section, so maybe in 20 years’ time this area will start filling in. 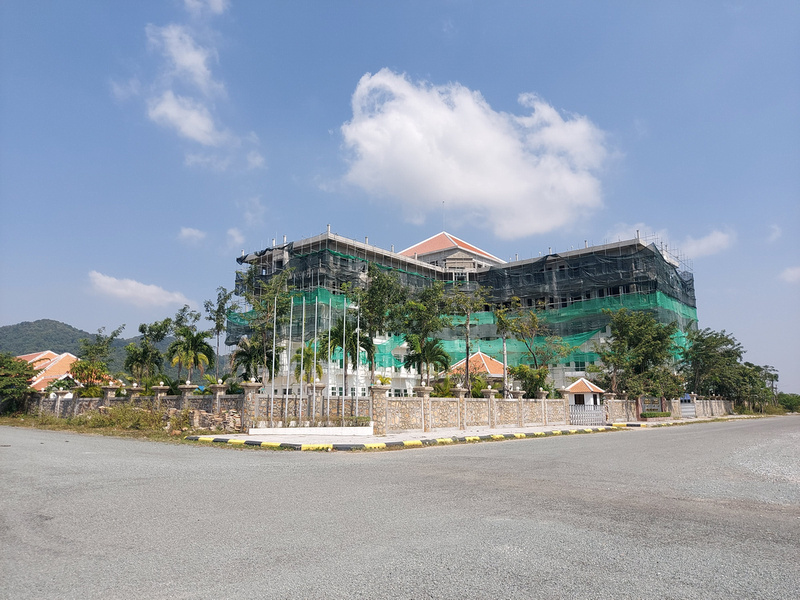 The coolest cafe in Kep

I didn’t have anywhere marked out to visit, so I figured I would just ride around and see what happens. I saw a sign for a cafe pointing down a side street, which lead me to Kep Coffee. 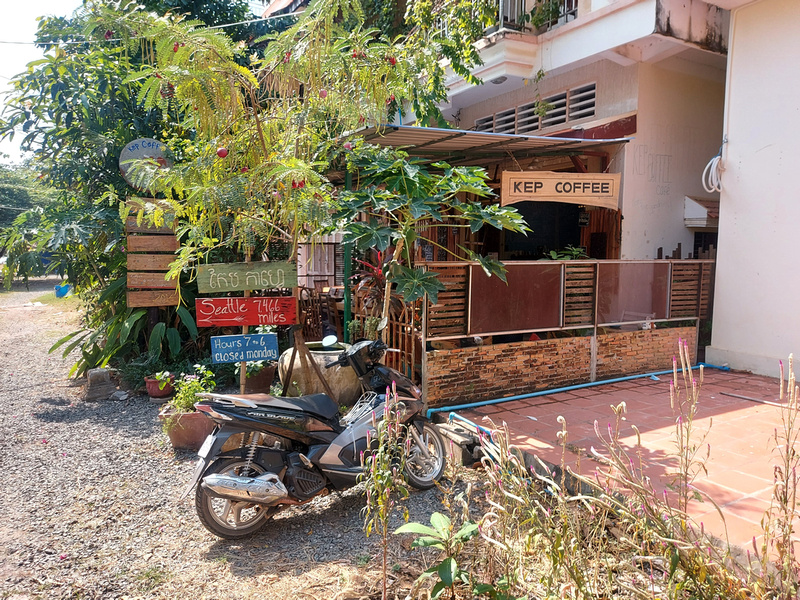 I’ve added this to my list of favourite cafes in Cambodia. 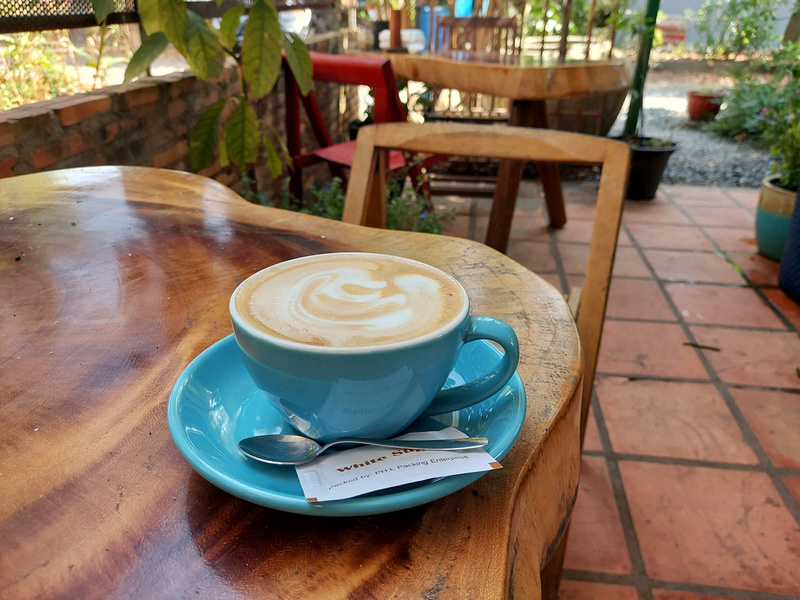 After Kep and Kampot I went back to Phnom Phnom, which was the end of my Cambodia trip. My next stop was to go back to Thailand.