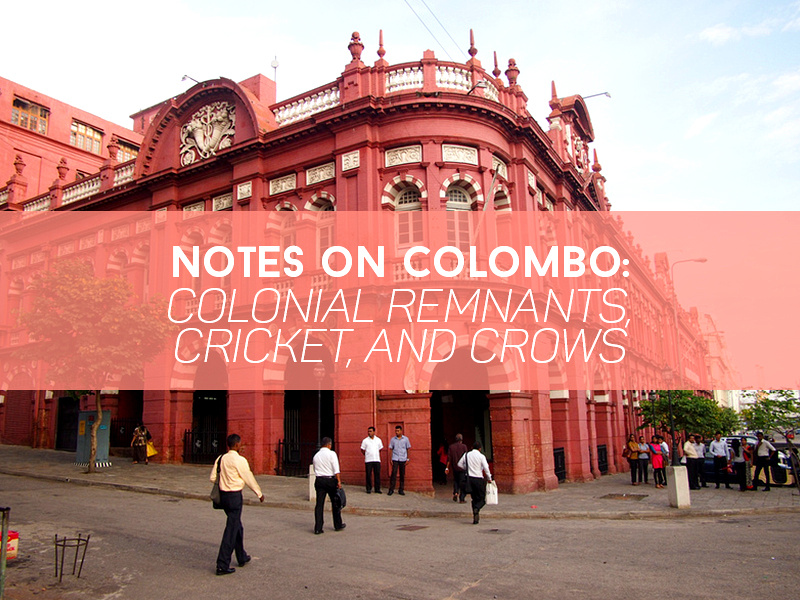 Reading up on Sri Lanka’s capital city I kept seeing the words “hectic”, “chaotic”, and “bustling” to describe the city, followed tips on how to get out of the city as soon as possible. They write that like it’s a bad thing. To me that sounds like a place I want to visit.

I’m drawn to chaotic urban environments so naturally I wasn’t going to bypass Colombo. I was looking forward to seeing what this “bustling” city has to offer.

It turns out that Colombo is just a regular crazy Asian city, and nothing near as crazy as its northern neighbour. It also has an excellent stock of heritage buildings which as survived demolition, which alone is worthy of a visit. 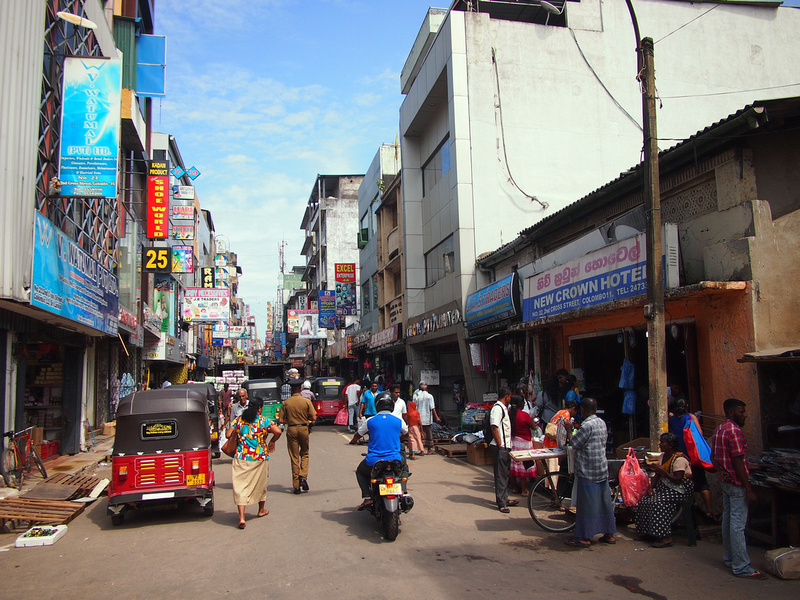 Fort is the central business district of Colombo and the place of most interest for visitors. It reminds me a little of Yangon in that is has a good collection of colonial-era heritage buildings, where years of under-investment has spared it from the wrecking ball.

Now that the city is starting to develop I hope that the old buildings aren’t lost, like what is happening in Saigon. Here are some of the buildings in Fort. 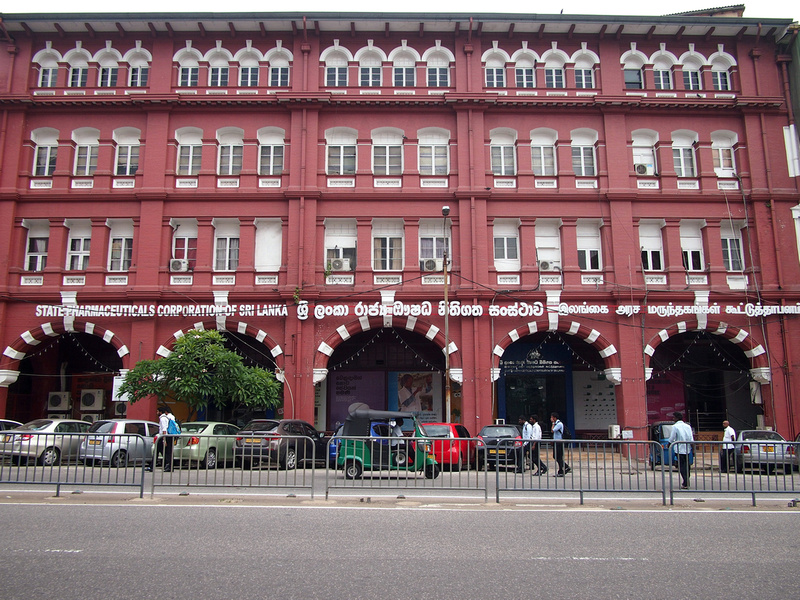 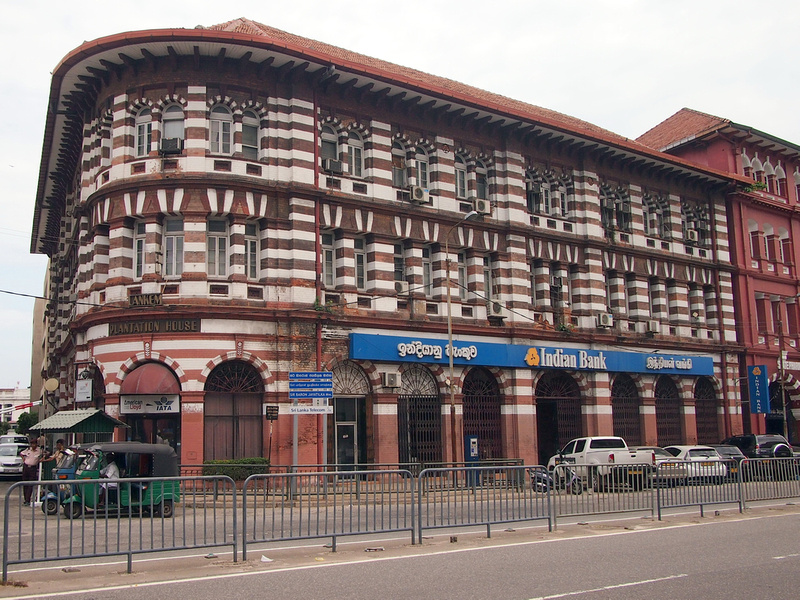 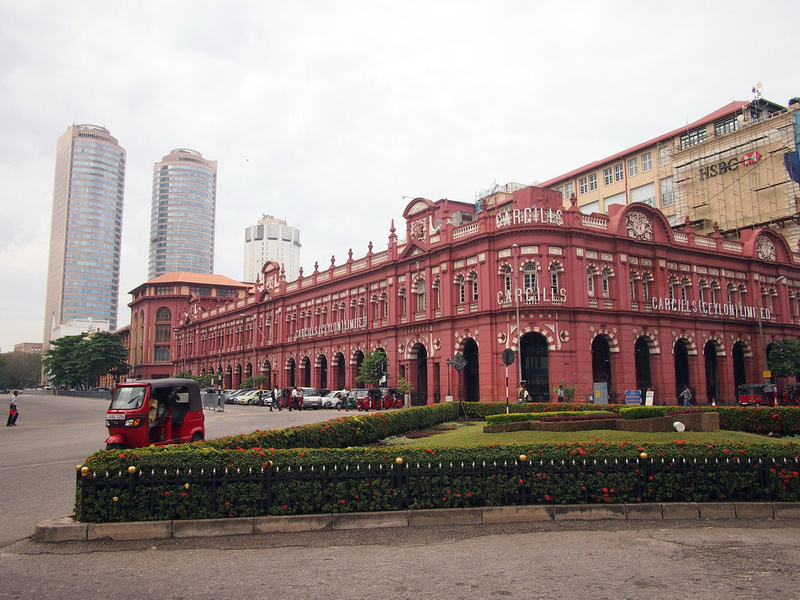 [Cargills and World Trade Centre behind.] 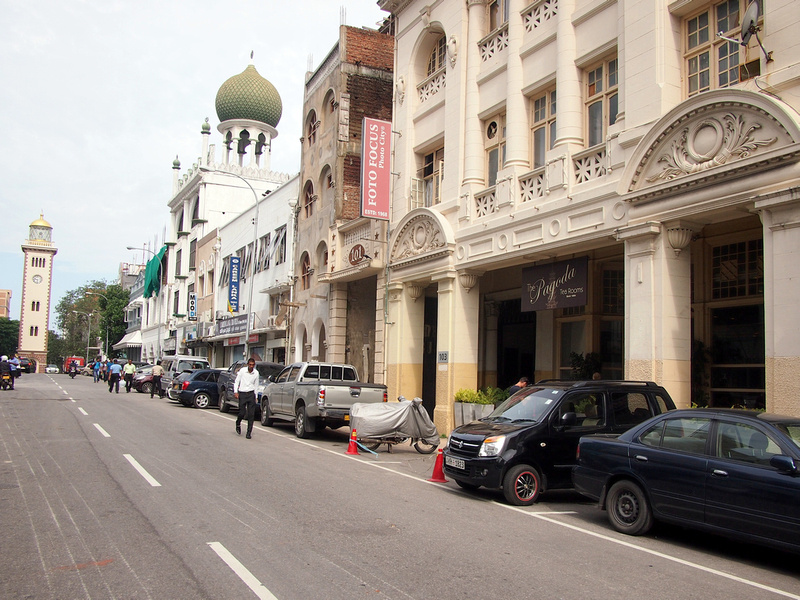 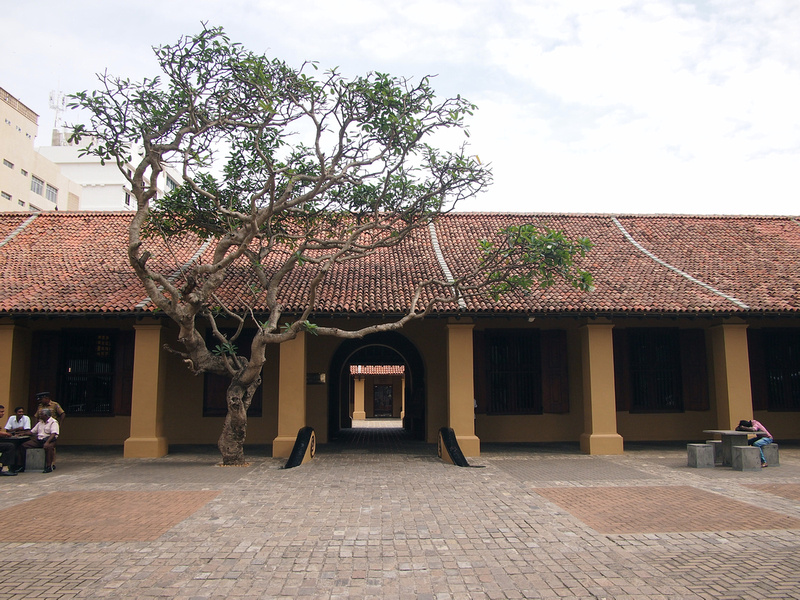 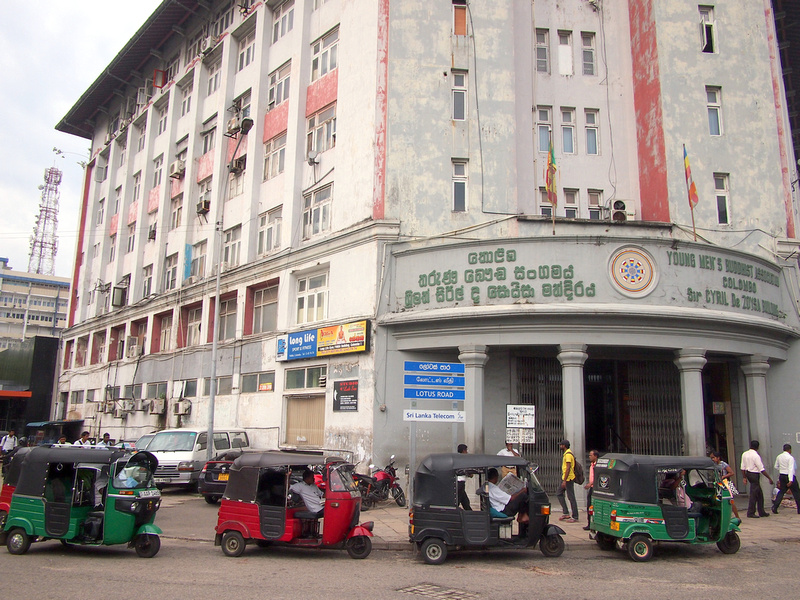 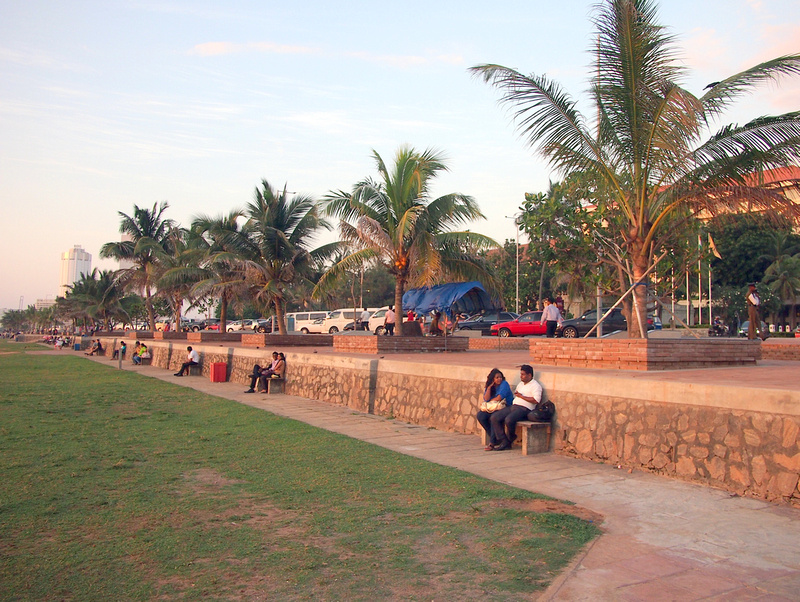 Next to Fort is Galle Face Green, which is a giant expanse of open space by the sea. This is the best place to watch the sunset, where temporary food stalls set up and people walk along the promenade.

The heart of the Sri Lankan railways can be found at Fort Railway Station. Most intercity trains start here, and even if you don’t want to come back you will most likely find yourself passing through Colombo again. 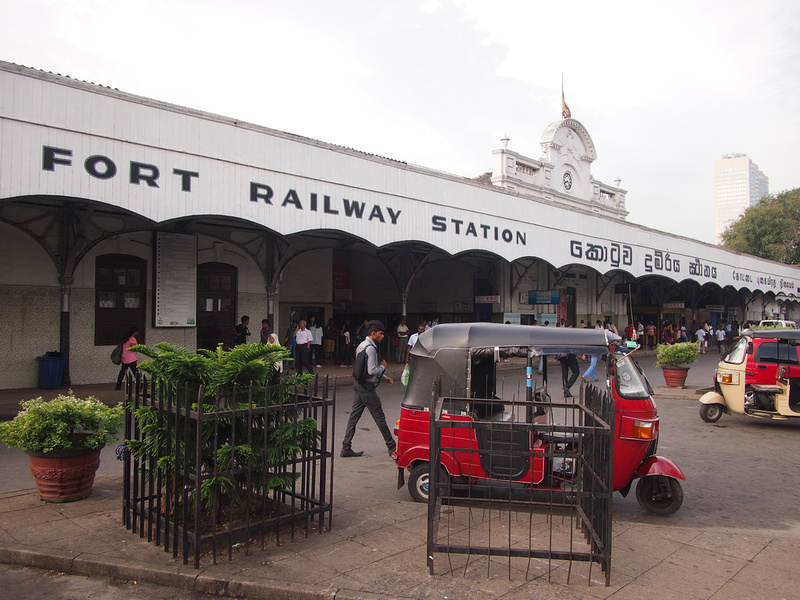 I came to Fort Station the day before I went to Kandy to find out about tickets, and also to watch the crowds. 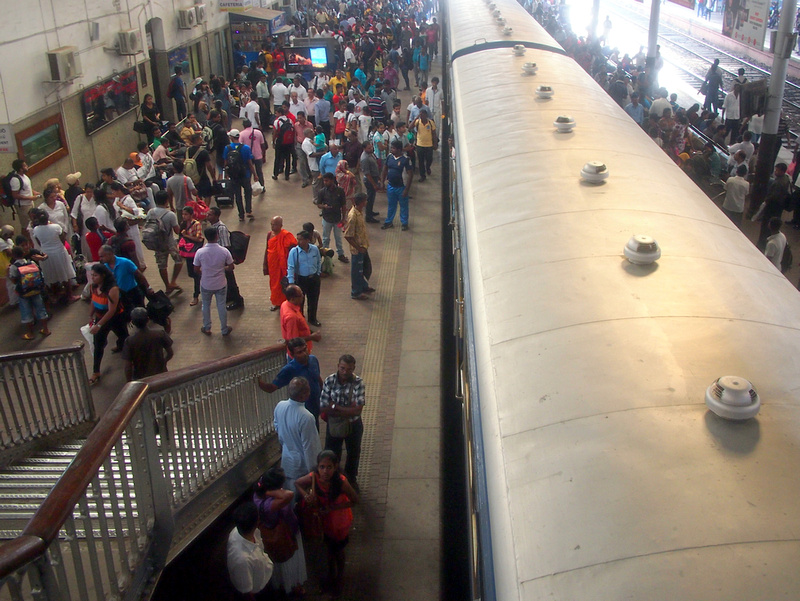 One stop south of Fort is Secretariat Halt station, which comes complete with a buddhist temple and coconut trees. 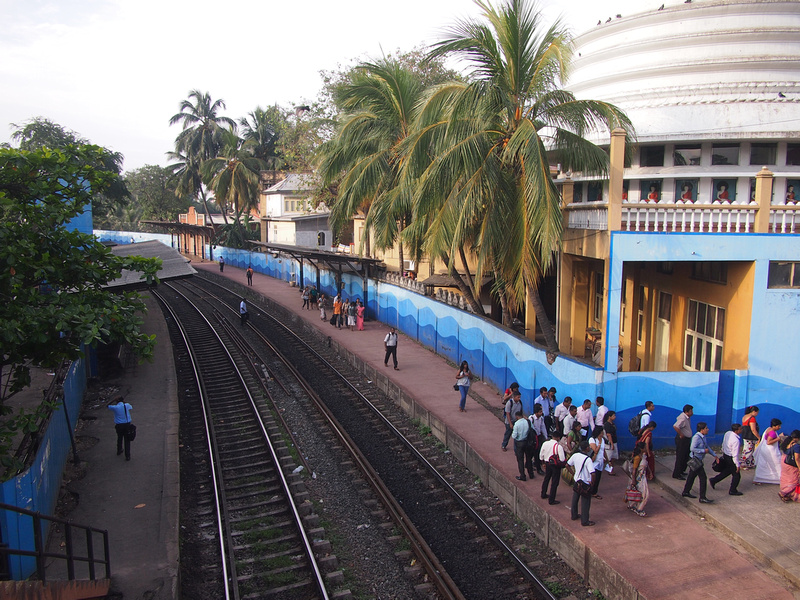 The stations are like a step back in time (in a good way) with wooden furnishings and hand-painted signs. I found myself admiring little details everywhere. 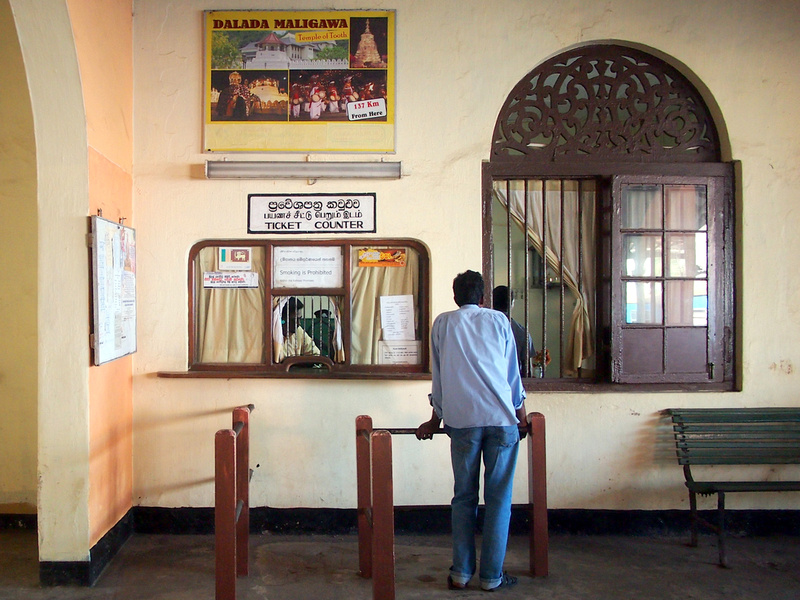 The southbound train from Colombo to Galle hugs the coast for most of the way. As I travelled through the southern suburbs of Colombo looking out at the sea, I couldn’t help but think about the prime coastal real estate that the train line occupies. 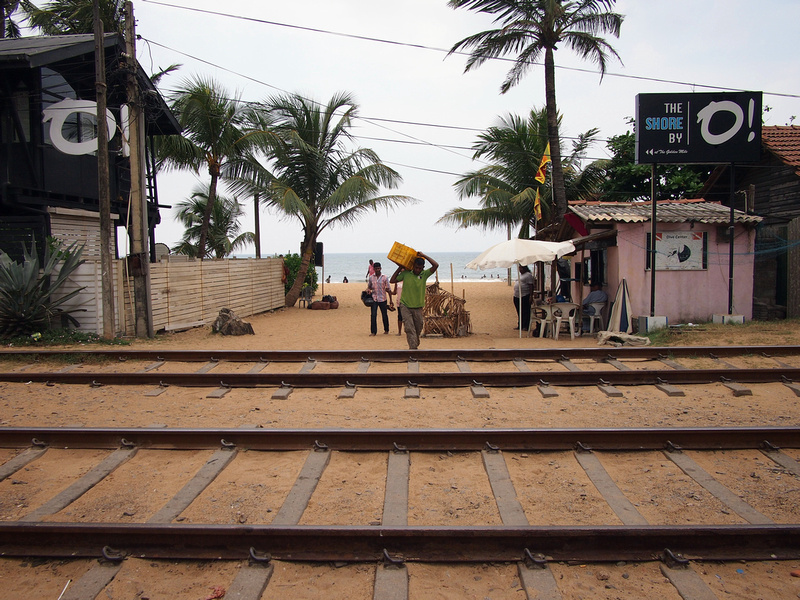 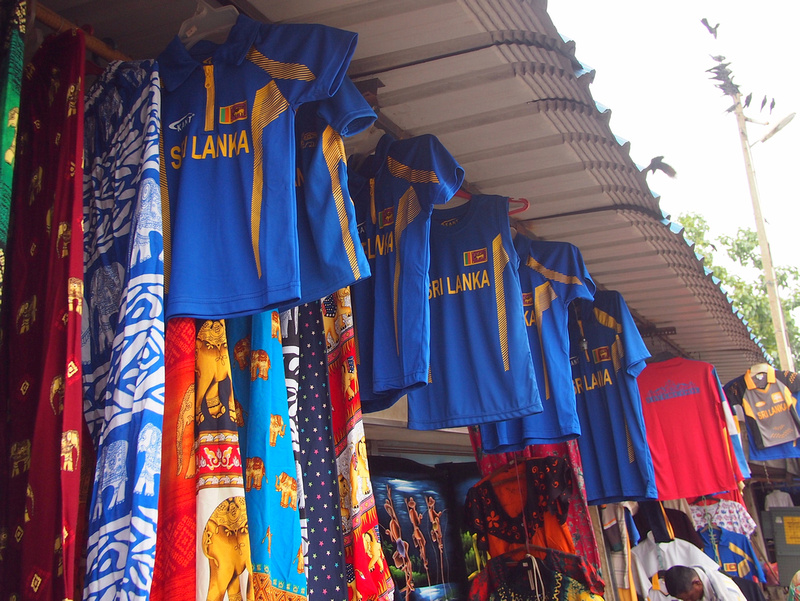 When I booked my flight to Sri Lanka I had forgotten that the Cricket World Cup was going to be played in Australia and New Zealand at the same time. This turned out to be a good thing as it became an instant topic of conversation in this cricket-mad country.

As soon as any cricket-crazy guy found out that I was from Australia (and there were many) it lead them into a roll call of their favourite Australian cricketers. Fortunately they were names from the 90’s, back when I used to be home to watch the cricket season.

These days I have no idea who makes up the Australian team so I resorted to praising the Sri Lankan team that beat Australia in the 1996 World Cup. That was the easiest way to make friends. 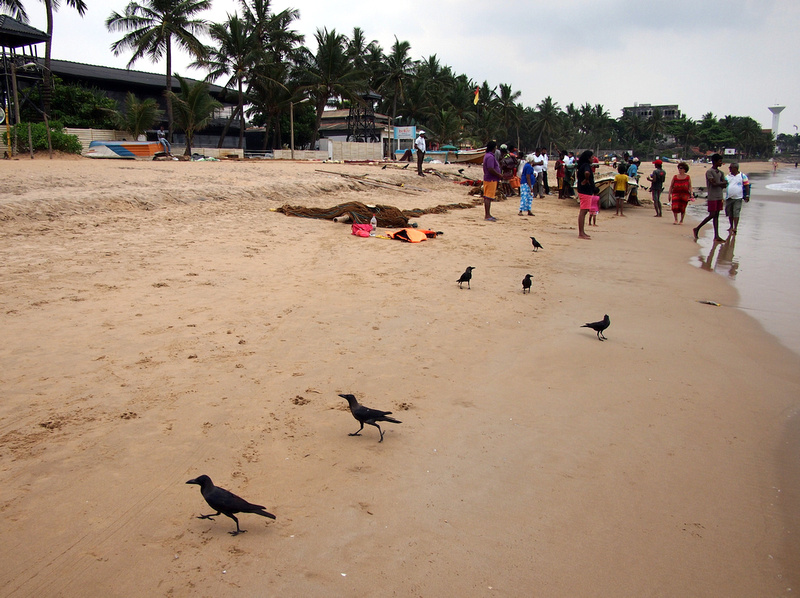 On my first trip to India in 2007 my first memory of waking up in Mumbai was the sound of crows outside my window. Cue 2015, and my first memory of waking up in Colombo was also to the sound of crows. The house crow can be found all over India and Sri Lanka. They are also known as Colombo Crows, and after a day in Colombo I could see why; these birds are everywhere. 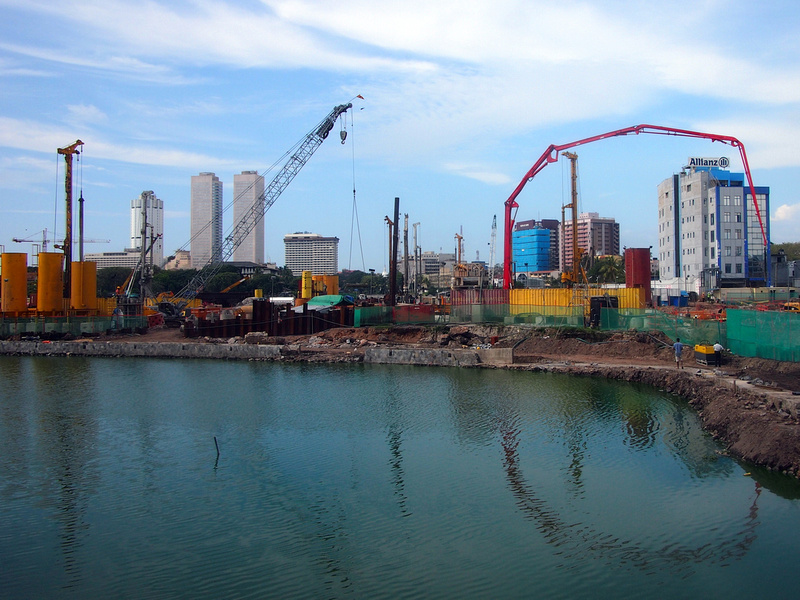 Colombo is a city on the cusp of major change. With the 26-year civil war ending in 2009, money is finding its way back to the city with major redevelopments planned or under construction. Whether the powers-that-be retain the heritage buildings or not remains to be seen.

One of the biggest developments is Krrish Square, which will incorporate a derelict heritage building into a tower complex which includes a 420m skyscraper. 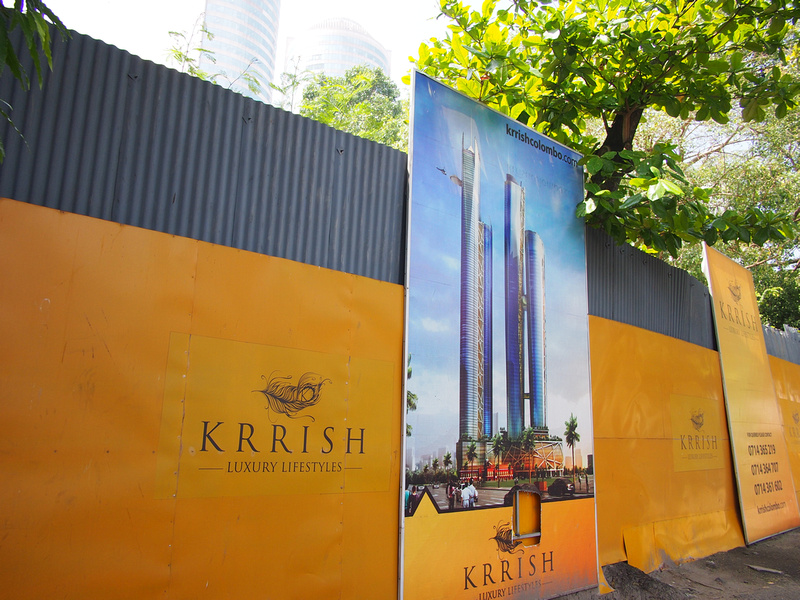 The Colombo Lotus Tower was half finished during my visit and when completed will stand at 350m. 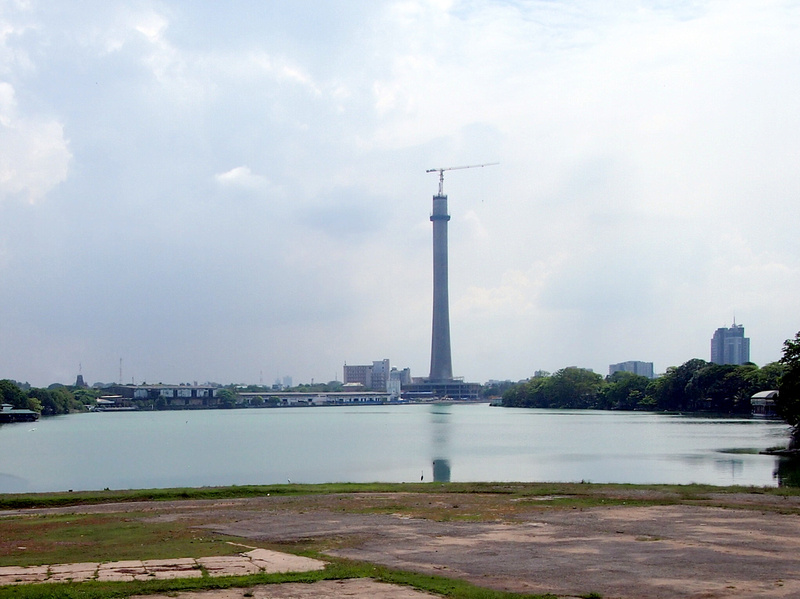 It was heartening to at least see one old building being refurbished and not demolished. 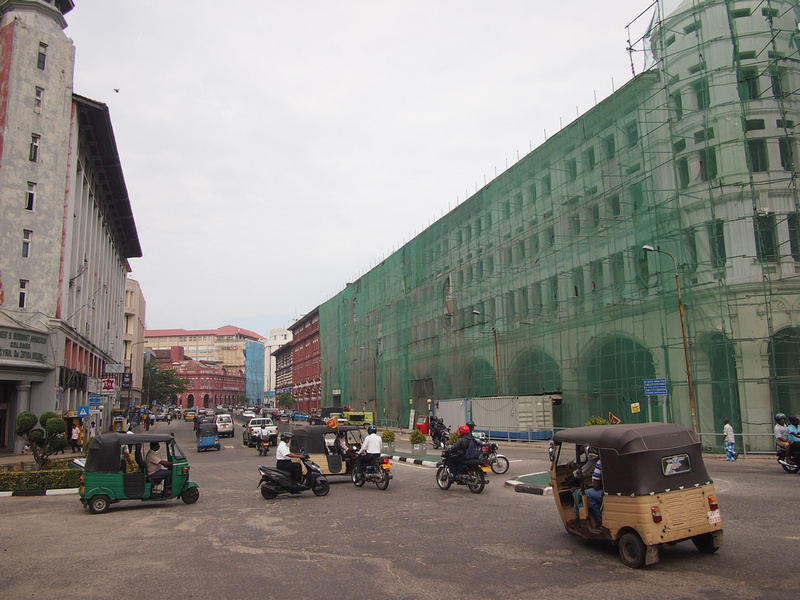 A coffee drinker in tea territory 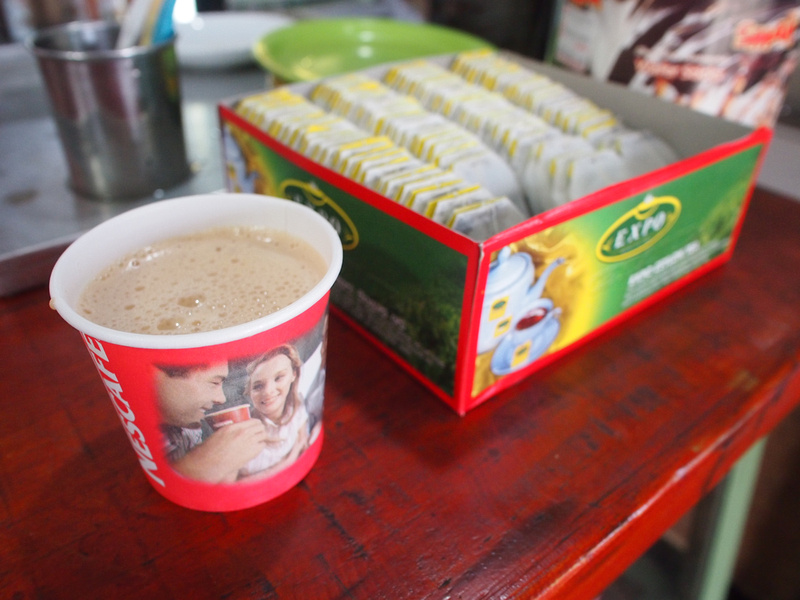 After half a day of wandering around Colombo it occurred to me that I hadn’t seen a cafe, or at least see a place that looked like it would sell coffee. I figured that this trip would be a good chance to see how long I could go without a coffee.

Believe it or not I do like tea, and in Sri Lanka they make it similar to the English style; black tea with milk, usually piping hot and sweet. The tea in the picture was from a train station and cost about 30 cents. During my time in Sri Lanka I had a few cups a day.

I lasted five days before I gave in. The coffee I had was not worthy of my return coffee and I immediately regretted it.

At the end of my stay in Sri Lanka I returned to Colombo and stayed in Mt. Lavinia, a beach suburb south of the city. There I found Toby’s Estate, which is a coffee company from Australia that serves what is probably the best coffee in Colombo. 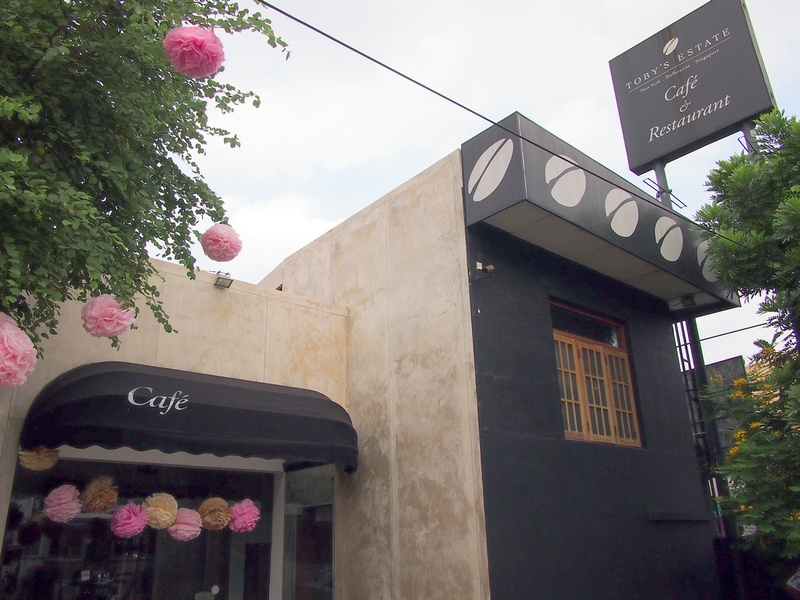 Since I’ve posted this trip report it sounds like the situation has improved considerably, as there are now a number of cafes serving good coffee in Colombo.

Accommodation in Colombo is at least twice as much as anywhere else in the country, and not near the value compared to, say, Southeast Asia, so that might limit your time here.

Fort
If you are spending a day in Colombo then stay in or near Fort as most of the interesting things to see are around here.

I ended up staying in an Airbnb Apartment which was close to the Fort area and an easy walk to Galle Face Green.

Mt. Lavinia
Mt. Lavinia is a suburb of Colombo that is popular with expats. The streets are leafier and more sedate than Fort. There is a beach and you can see the growing city skyline of Colombo in the distance. The beach is nice to walk along but the water isn’t of the tropical blue variety that you come to Sri Lanka for.

I stayed at the Golden Bridge Guest House which is in a quiet street and about 10 minutes walk from the train station. There is a suburban train that goes to Fort Station and takes about half an hour.

Negombo Beach
Negombo is north of Colombo and is where the international airport is. There are many budget guesthouses and hostels here, especially along Beach Road. It’s a good place to stay if your flight arrives late at night or if you have an early morning departure and don’t want to travel from Colombo.

Apart from that though I wouldn’t recommend staying here unless you are on an extreme budget. You could stay in a cheap hostel here and get the train into Colombo on a day trip.

There is a beach at Negombo but it pales in comparison to the beaches I visited in the south (and no doubt around the rest of the island as well). I saw lots of European sunbathers on the beach and I wondered why they were on this beach when there are better beaches to go to. Did they just get off the plane and settle on the first beach they saw? (Which I suppose would still be better than anything on offer back home.)

I stayed at the Barracuda Beach Hostel, and you can search for more hostels and hotels here. If you are arriving early enough you could walk along Beach Road and find a room, but late arrivals are better off booking in advance.