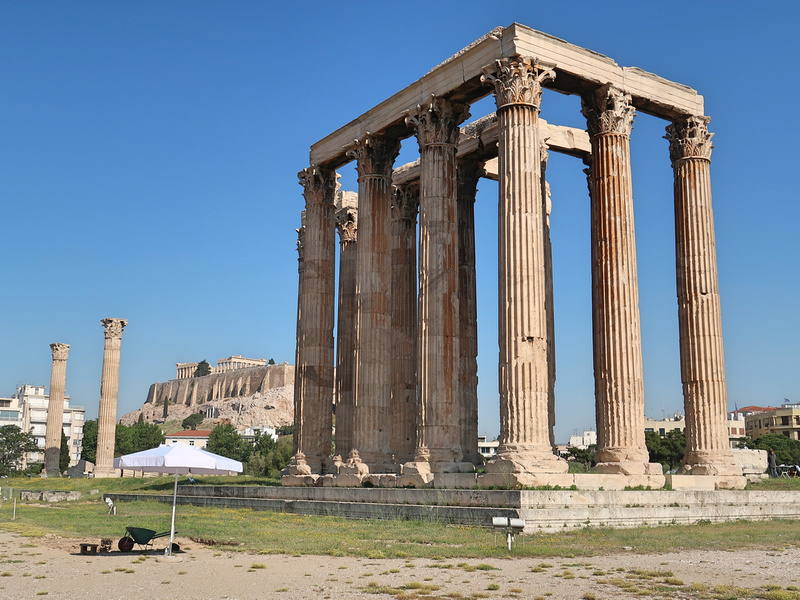 I knew I was going to like Athens even before I went. Apart from being one of the most culturally significant cities in Europe, Athens has a reputation of being a bit rough around the edges. That sounds like my kind of place, and after arriving I was asking myself why I hadn’t visited sooner.

From the airport I got the metro and emerged from underground at Monastiraki station. I couldn’t have asked for a better introduction to Athens as one of the first things I saw was the Acropolis. It’s one of those world icons that’s so familiar that it’s slightly surreal to see it for the first time. 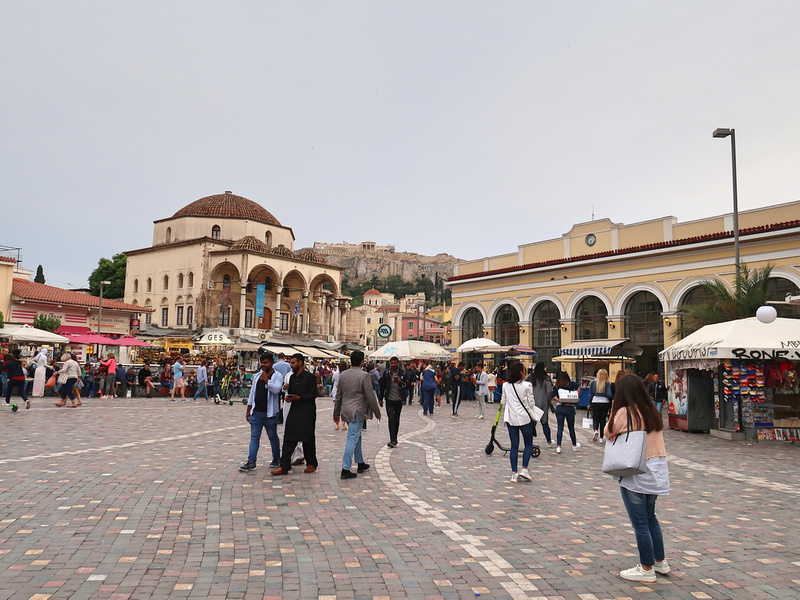 From Monastiraki I walked to my hotel, which was about 10 minutes walk away. I booked a room in a cheap hotel, choosing location over amenities. When I threw back the curtains in my room I was amazed to see that my 2-star hotel had a 5-star view of the Acropolis.

I arrived in Athens (first time here!) to find my 2-star hotel has a 5-star view of the Acropolis. Looking forward to checking it out and just wandering the streets.

It helped that I had a room on the 8th floor on the side of the building facing the Acropolis. But still, I was impressed. As I was to later find out, there is a building height limit imposed in Athens. Buildings can be no higher than 12 floors or 27 metres so that the Acropolis can be viewed from anywhere in the city.

While there have been some exceptions to this rule, overall the city has a uniform height. Some tall buildings snuck through loopholes during times of political instability, and even now it’s a constant battle to preserve this height restriction. 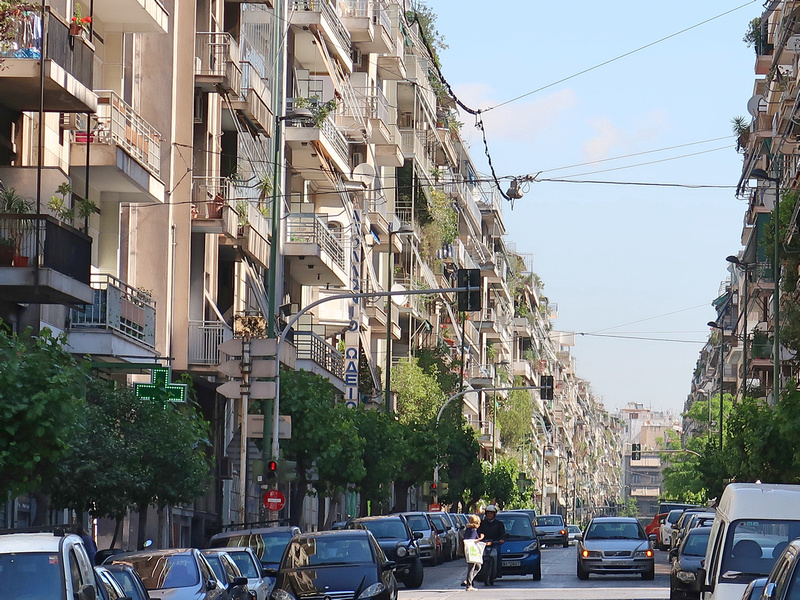 Once you know this height limit it’s hard not to notice it everywhere. Apart from looking out the window when flying in, one place to see this on Mt Lycabettus. Walking up the hill is a good free thing to do in Athens. 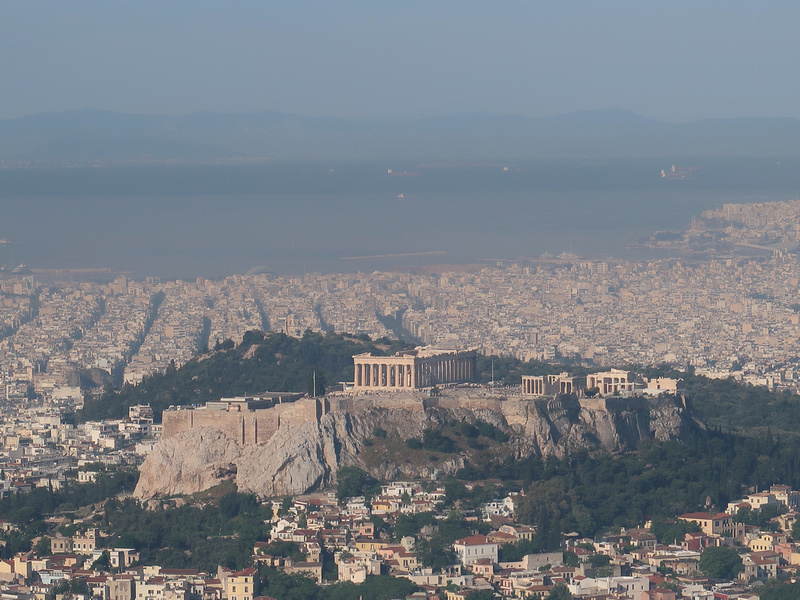 I went in the morning so the sun was behind me, and the only other people there was a cleaner and a nun at the chapel. I’m told it’s mayhem at sunset. 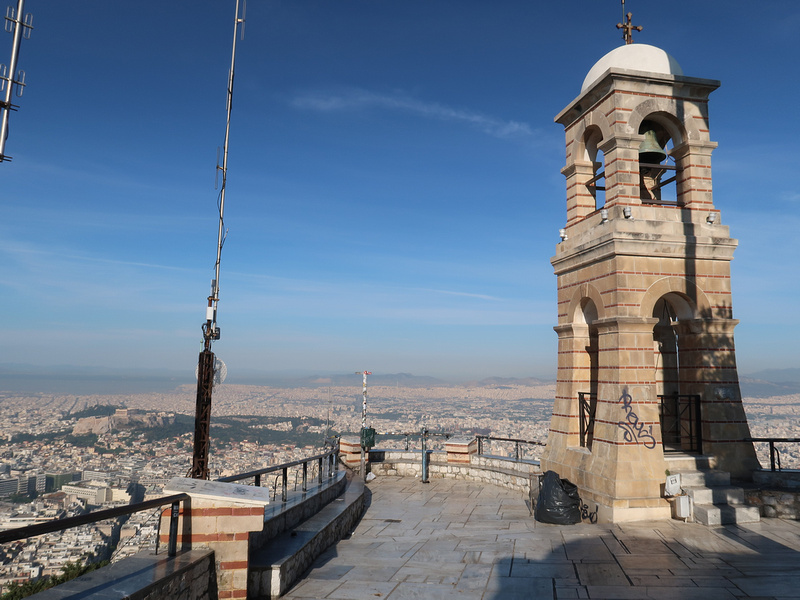 I picked my hotel so I could be close to the main tourist sites. I could see myself coming back to Athens and staying in a neighbourhood away from the centre, but for this trip I was in unashamed tourist mode. 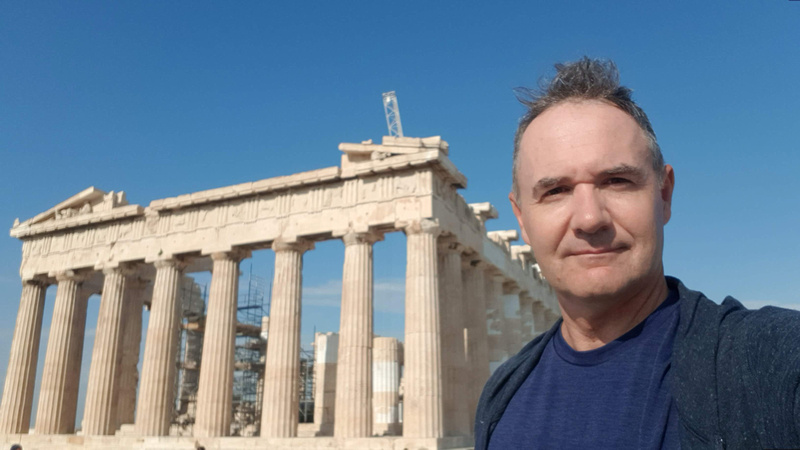 While I was in tourist mode there was no way I was going to miss the changing of the guards at Syntagma Square. 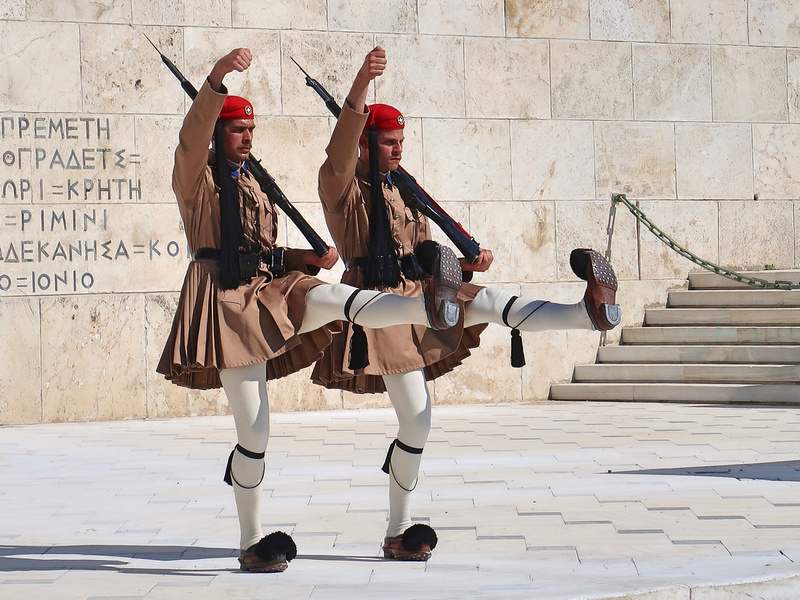 This was by far the biggest tourist crowd I experienced. 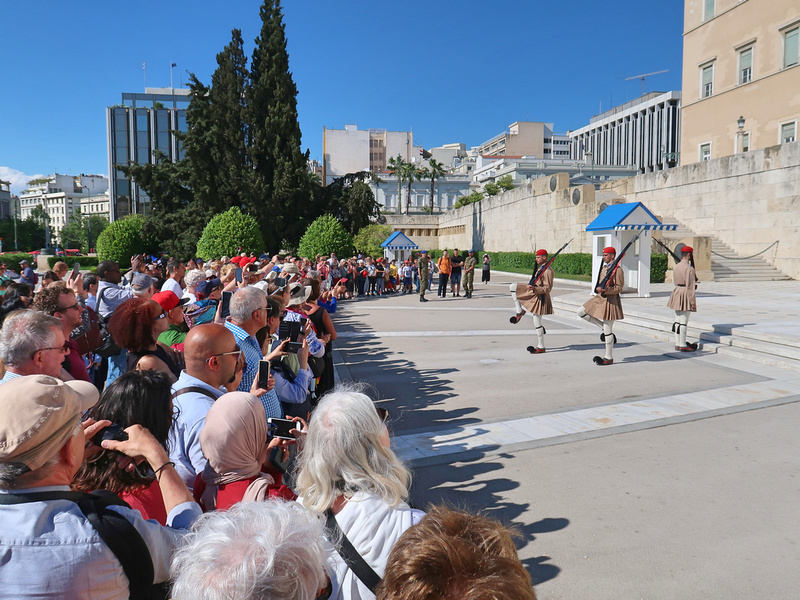 Another interesting aspect of Athens is its Olympics heritage. The Panathenaic Stadium was home to the first modern Olympics in 1896 and the stadium is built entirely of marble. 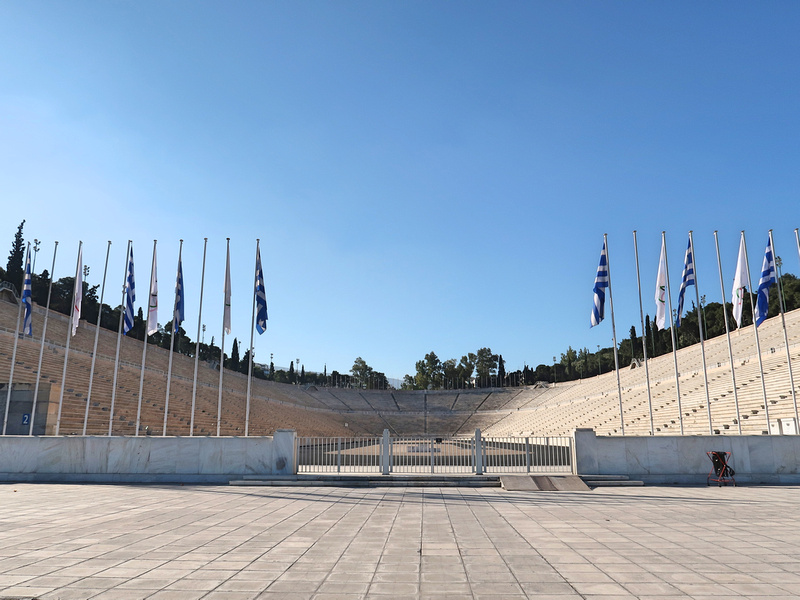 I also visited the National Archaeological Museum of Athens. I had the good fortune of being in Athens on International Museum Day, so museums were free. Of all the cities to be in on this day! I would have happily paid for this one anyway. 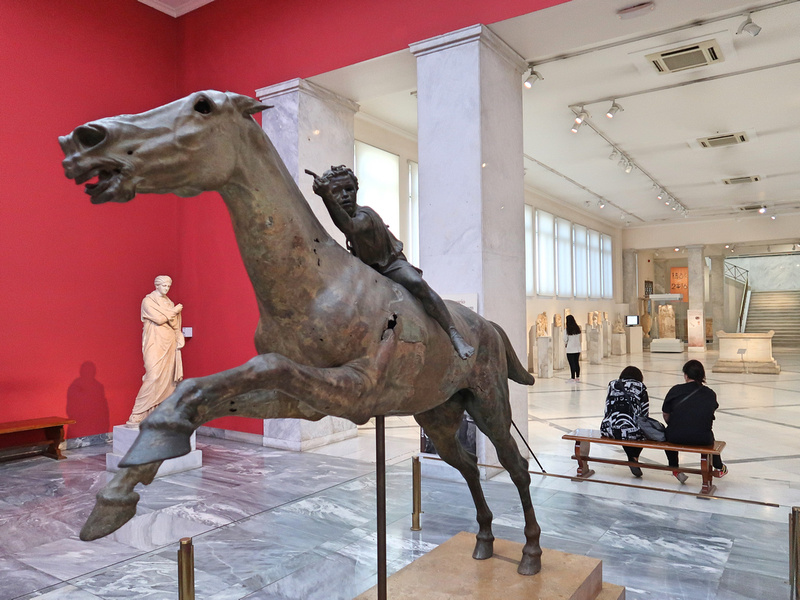 Going beyond the obvious tourist spots I spent my time wandering side streets. In the backstreets behind my hotel I stumbled into Little Dhaka, where the streets are lined with Bangladeshi markets and shops. If I wasn’t conserving my meals for Greek food I would have been easily tempted to have a curry. 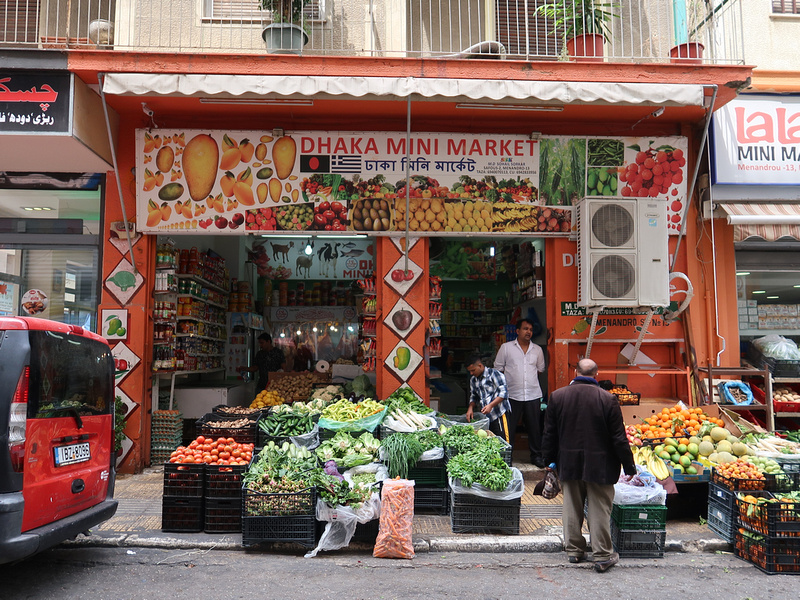 There are big Bangladeshi communities in the UK, which you would expect given the connection to the British Empire. I hadn’t thought about what the make up of migrant communities in Athens would comprise. 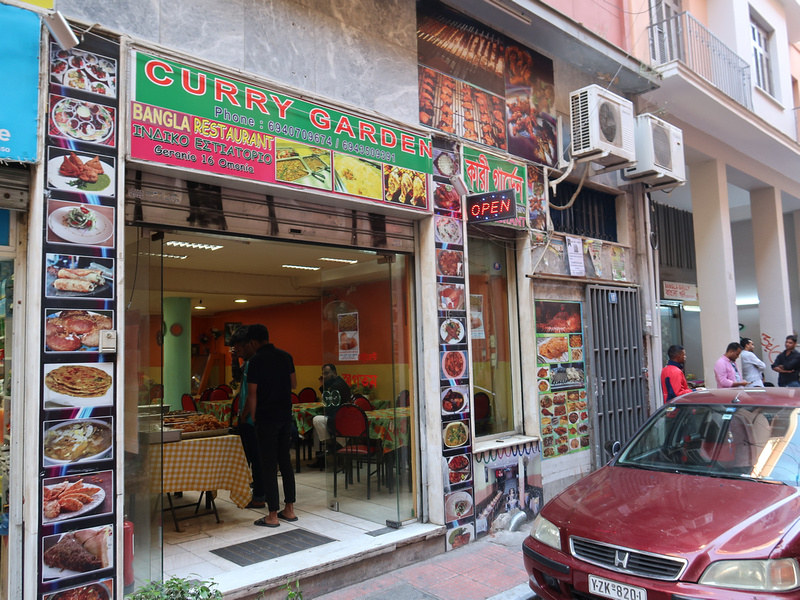 In post-war Greece the population declined for decades, with many Greeks settling in Australia. Another reason I felt like I was going to like Athens was because Melbourne has the largest Greek-speaking population outside Greece. So many things in Athens felt familiar to me from the Greek communities in Melbourne. There used to be direct flights with Olympic Airlines to Melbourne, and the Melbourne to Athens route is still viable if an airline chooses to restart it. Qantas used to stop here on one of its many stops on the Kangaroo Route, and more recently Qantas had floated the idea of flying here under the Jetstar brand.

After years of population decline, net migration went back into the positive, though it has dropped again since the Greek government-debt crisis. It’ll be interesting to see what the 2020 migration statistics are compared to 2015 as a lot of things have changed. 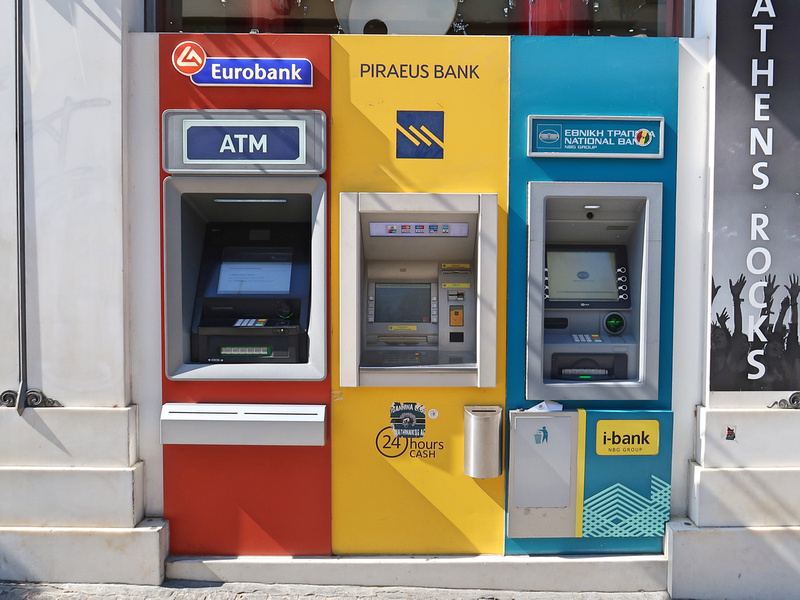 There has been an influx of migrants and refugees, and Greece is also becoming a hotspot for wealthy investors. Like their Mediterranean counterparts of Cyprus and Malta, Greece has set up a Golden Visa Program. This program offers a five year residency visa in return for an investment in real estate, and it has contributed to an economic revival.

Then there is China’s Belt and Road Initiative, which has seen the port at Piraeus being acquired by a Chinese company. Around the city I saw some signs of Chinese investments, with some new buildings going up with the ubiquitous WeChat QR codes. 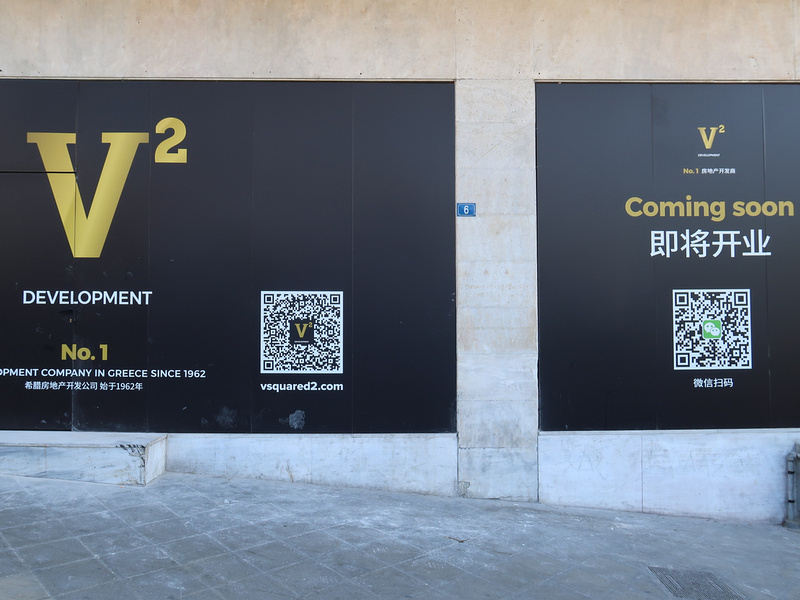 Perhaps it’s just that Greece is once again becoming a crossroads of civilizations, and the country is coming to terms with being a land of migrants, refugees, traders and investors. As the world’s balance of power shifts to the east it would make sense that Athens once again becomes a strategic city.

One of the most notable features of Athens is the prevalence of graffiti. I haven’t been everywhere so I can’t say that Athens is the most graffitied city in the world. I have been to enough places though to be able to say that I’ve never seen so much graffiti as I’ve seen in Athens. It’s rare to find a single wall that doesn’t have some kind of griffin on it, and I think this is why people associate Athens with being a grimy city. 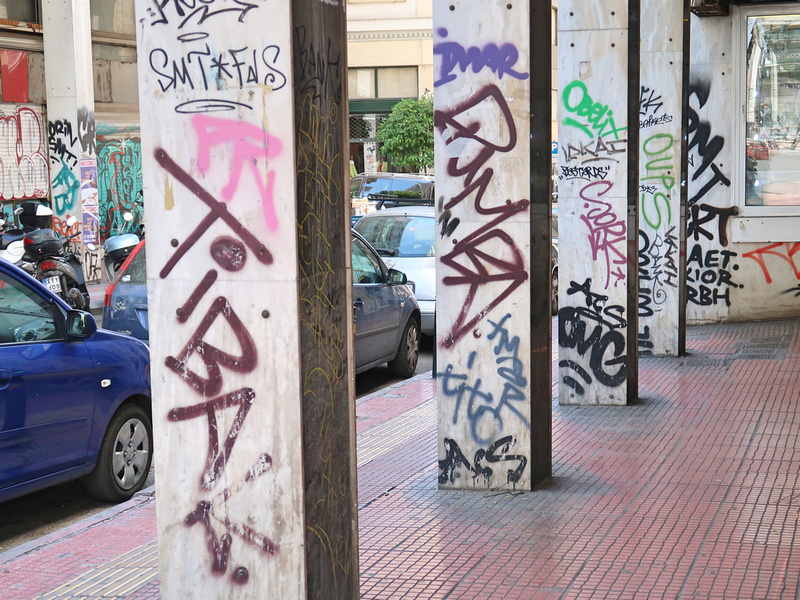 I like street art, and being from Melbourne where street art is even celebrated by the city council I’m all for it. There are some good murals to be found around the city. 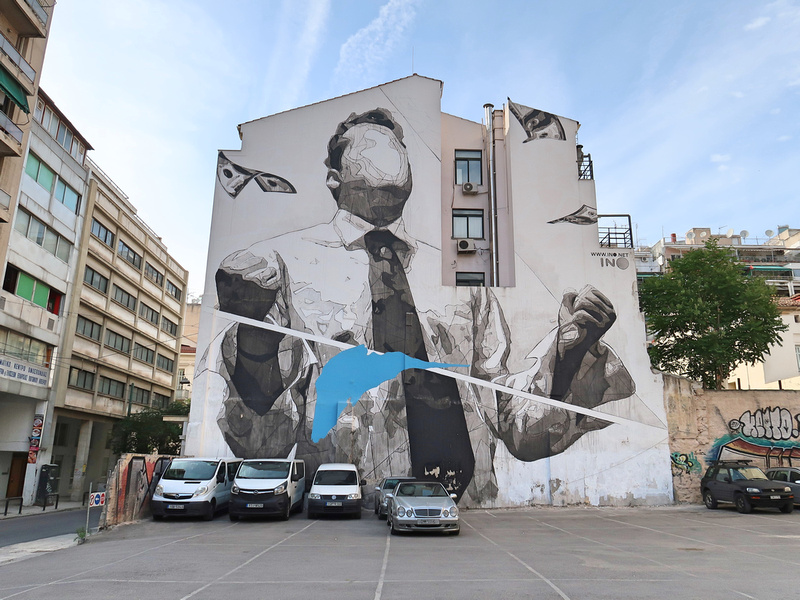 And if you walk around long enough you’ll spot some creative street art. 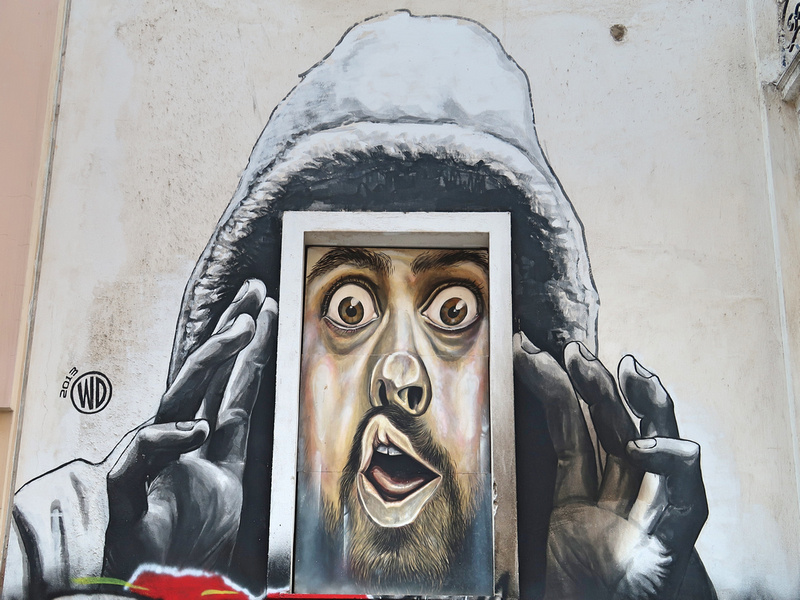 There is also some officially-commissioned public art. 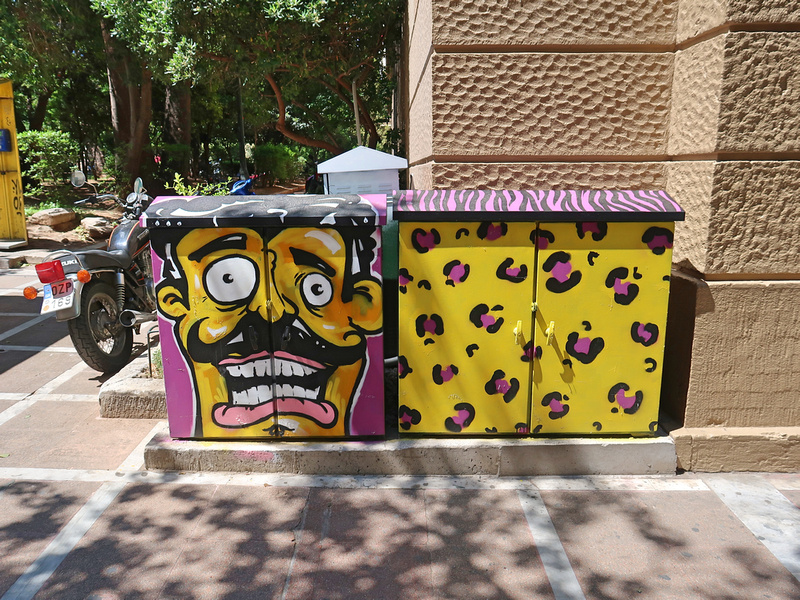 But for the most part it’s all ugly tagging garbage. I even saw cars that that had been tagged. 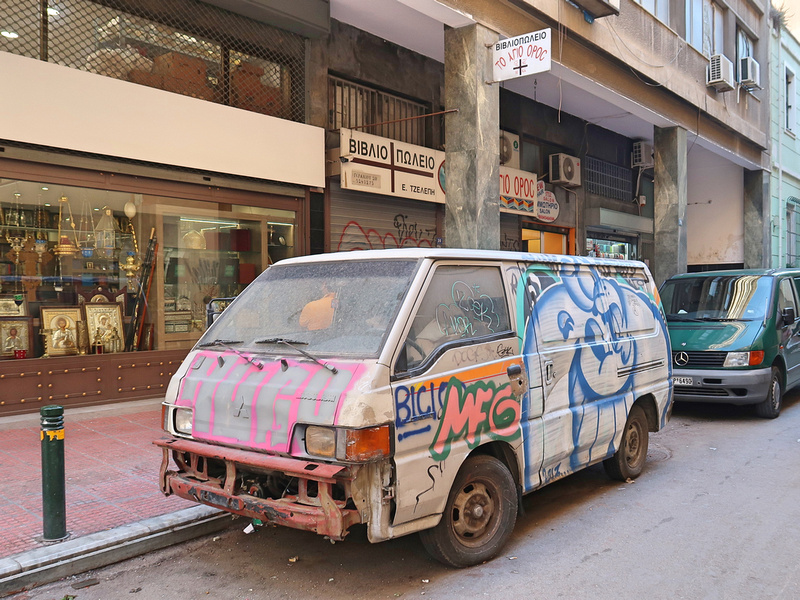 Along with graffiti, the other thing that the city is known for that it probably doesn’t want to be known for is striking and protests. After my visit to the Acropolis I heard some protest chanting in the distance, so I wandered over to investigate. It was a school children climate strike, which has been happening around the world. 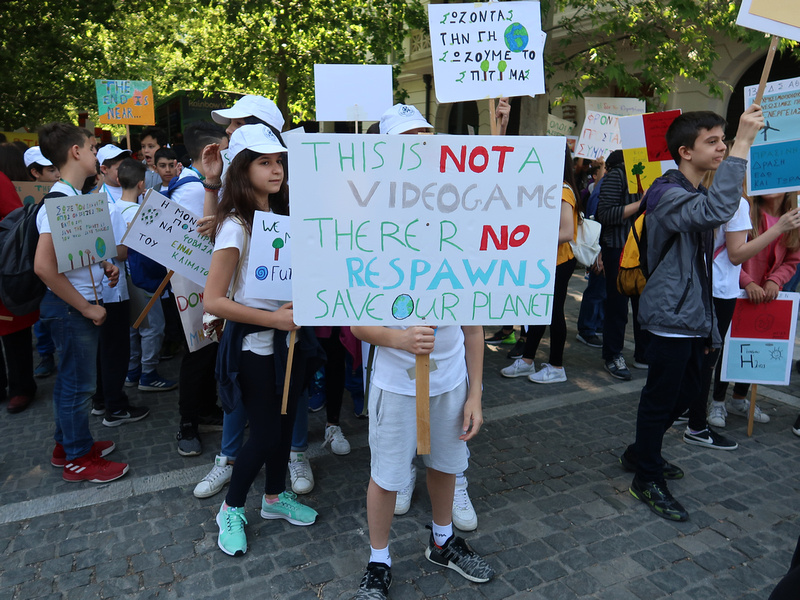 In a nice touch of solidarity a marching band led the procession. 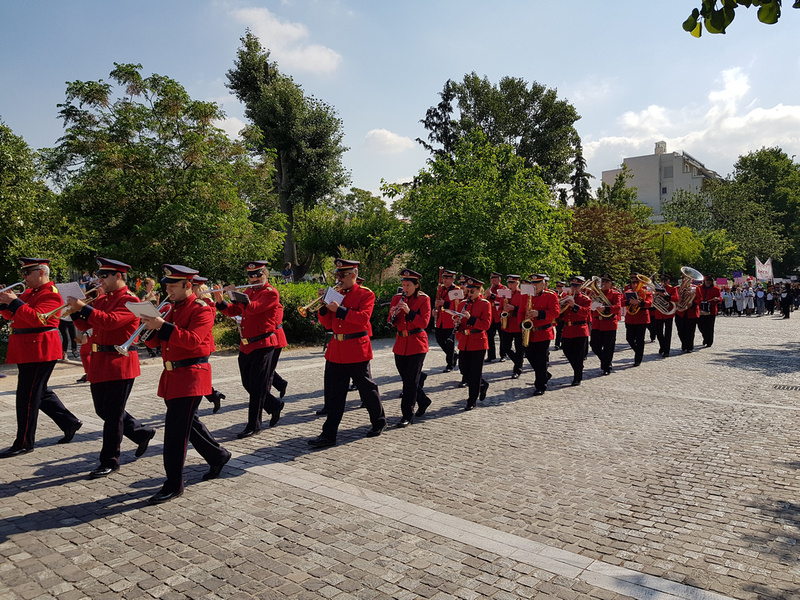 As I mentioned on my wanderings in Hong Kong, I usually star some cafes in Google Maps and use those points as targets to walk to. I then go exploring streets from there. There is a great cafe scene here, and Greece has its own style of coffee culture. 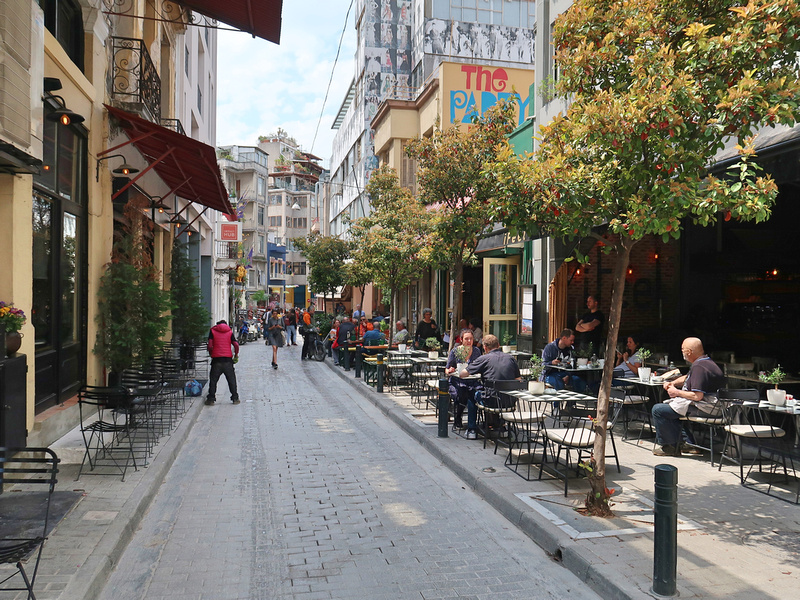 One of the most noticeable habits of the modern Athenian is their walking around while nursing a plastic cup of iced coffee. This is the frappe (not to be confused with the Frappuccino®), which is an iced coffee drink first concocted in Greece. 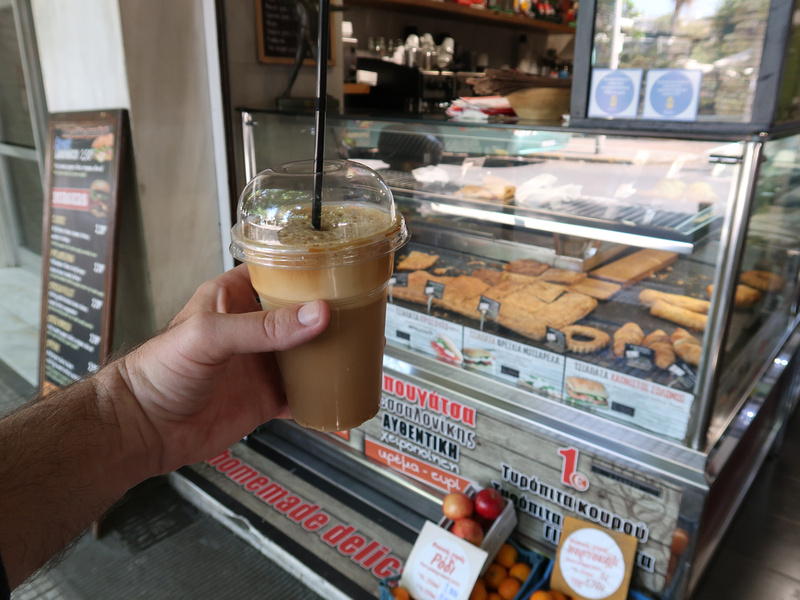 A frappe is best enjoyed with sugar as it takes the edge of the robustiness of the Nescafe instant coffee. It’s a bit like the Vietnamese iced coffee, where the sweetened condensed milk takes the bite out of the bitterness. I like the frappe when it has sugar in it, but I try to limit my drinks with sugar. Having a frappe without sugar was a bust.

Fortunately Athens is onto the third wave coffee now, and there are numerous hipster cafes serving espresso coffee. 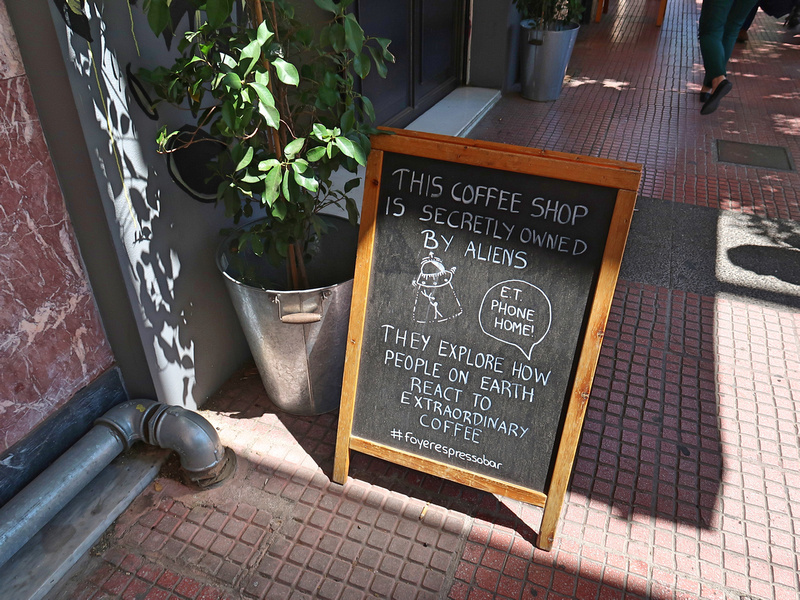 And lets not forget the old-school Greek coffee. 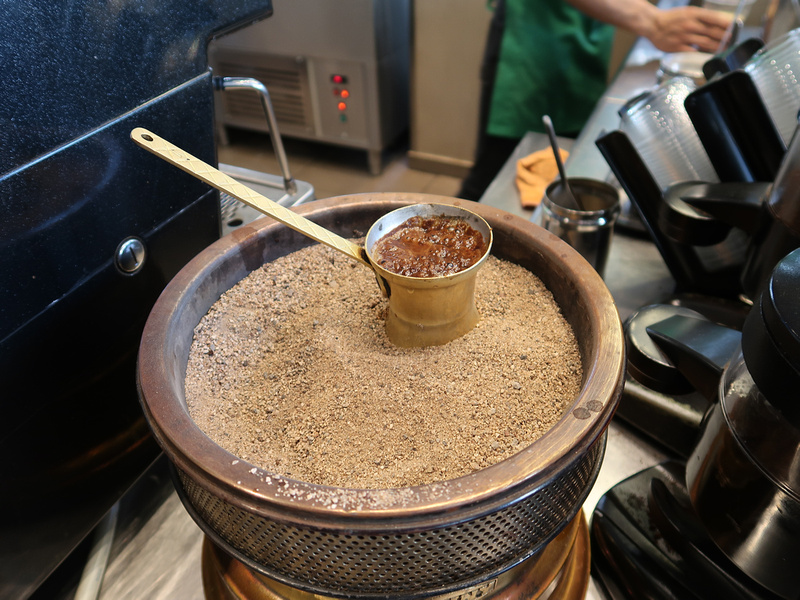 So that was my introduction to Athens. I was lucky to be here during perfect spring weather, and I could see myself stopping here for a few days en route to visiting the Greek islands.

I leave you with some street cats of Athens. 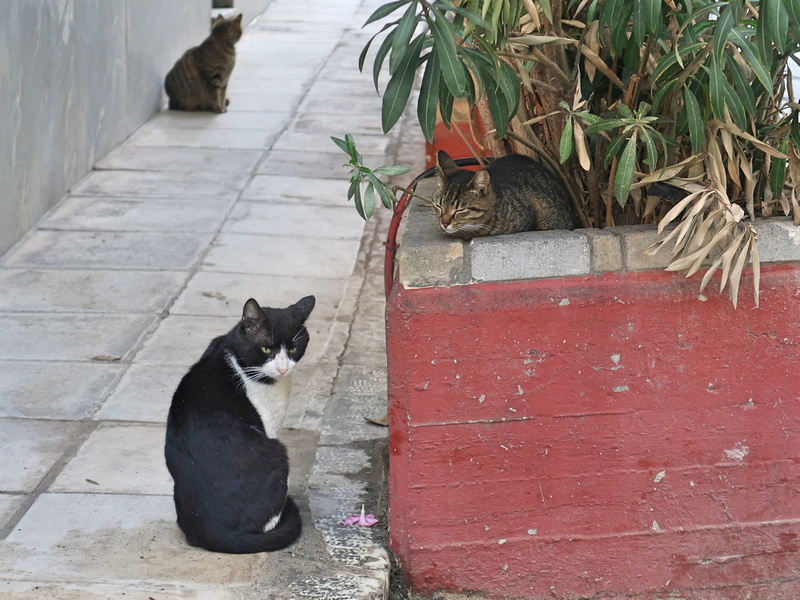