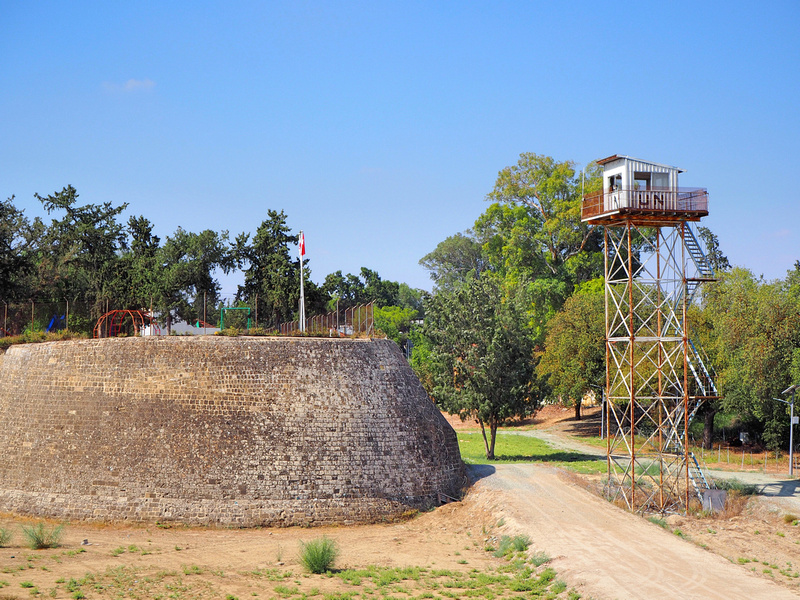 During my trip to Cyprus I included a stay in Nicosia. Most visitors do day trips from the coastal resorts, but I wanted to stay and have a proper look around. Its inland location wipes out any interest of visiting for most foreign tourists, who come to Cyprus for sand and sea holidays. I’m more of a city person, so the prospect of staying in an old city with such a complicated modern history was more alluring than a resort holiday.

Nicosia has the distinction of being the last divided capital city in Euorpe. After all these years it’s remarkable that a divided city still remains. Nicosia is the capital of the Republic of Cyprus, while the northern half of Nicosia is the self-proclaimed capital of the Turkish Republic of Northern Cyprus. Turkey is the only country in the world to recognise Northern Cyprus.

In a nutshell, Turkey invade Cyprus in 1974 after the Cypriot coup d’état, whose aim was to become part of Greece. There is a large Turkish Cypriot community on the island, hence the intervention by Turkey. Eventually the Turkish army took control of the top third of the island, including half of Nicosia. The United Nations Buffer Zone in Cyprus (AKA The Green Line) was established between north and south, and remains to this day. Read more about the history of Cyprus.

There is no airport here, so the closest major airport in the Republic of Cyprus is via Larnaca (about one hour by bus). Nicosia was served by Nicosia International Airport until it was stranded inside the United Nations buffer zone in 1974. It now sits abandoned and gathering dust. The airport, like the rest of the exclusion zone, has become a time capsule of another era.

I got the bus from Larnaca and as soon as I arrived it felt good to be back in a regular city. The bus station is next to the old city wall and moat, and there was lots of construction going on nearby. This particular section of the moat was being redeveloped into a new public space. 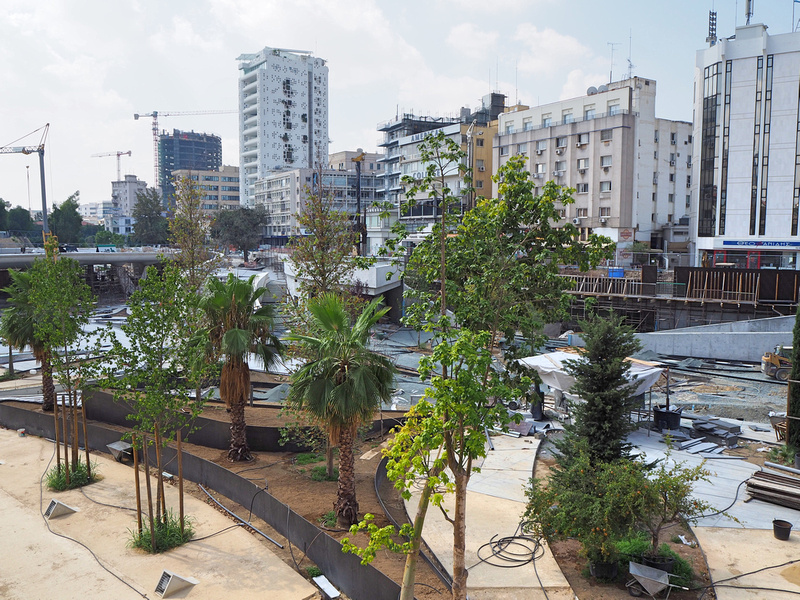 This project has been designed by Zaha Hadid Architects, which automatically made me want to come back and see the finished result. 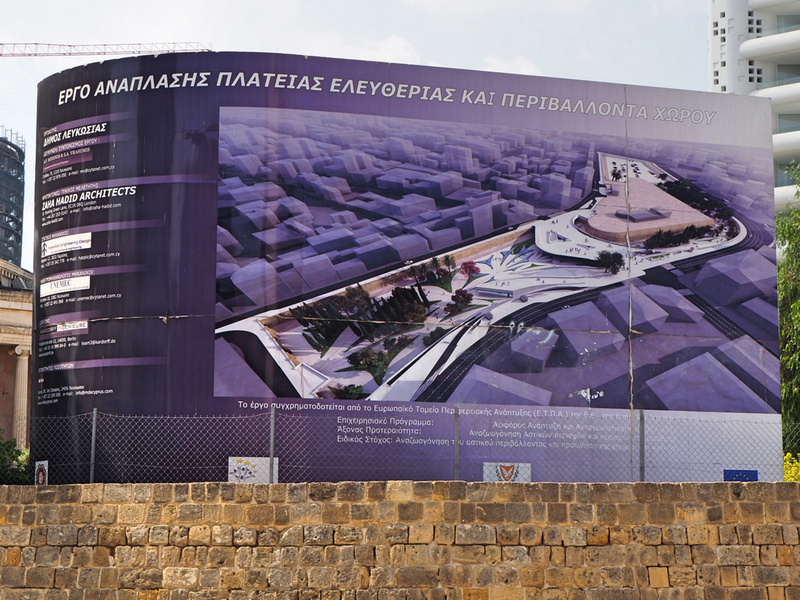 The highlight of Nicosia are the medieval walls, which forms a 5km circle around the city. Most of the walls are intact, including the eleven heart-shaped bastions that protrude from the walls. 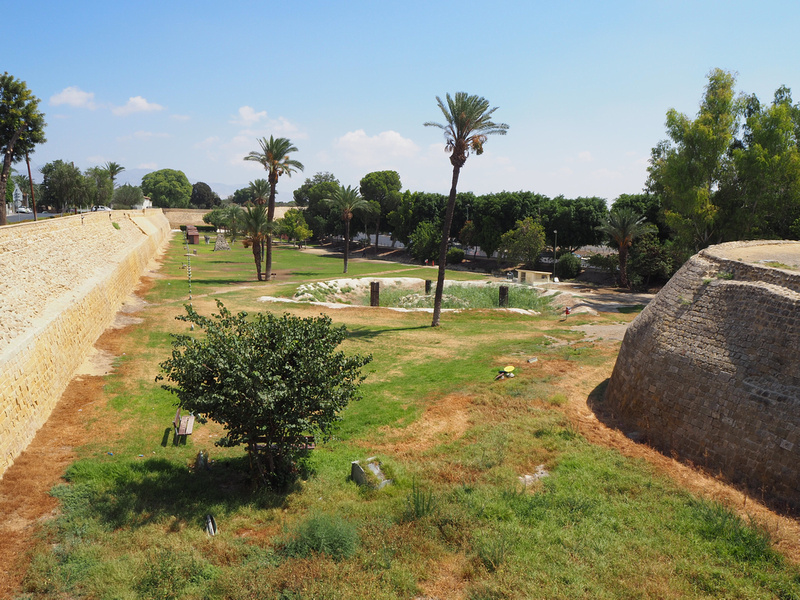 Around the wall there was once a moat. That space is now has various uses, including gardens and car parks. The Zaha Hadid project is in a section of the moat. 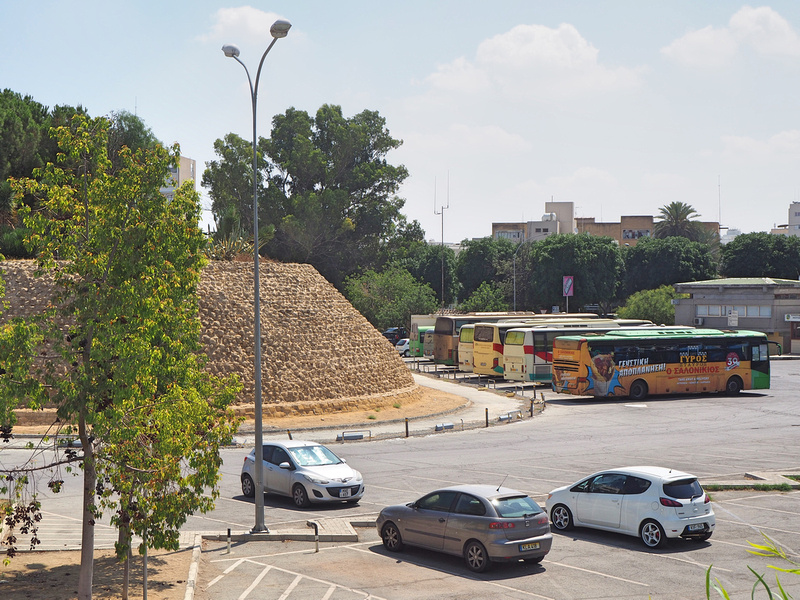 I arrived on a Sunday and I couldn’t help but notice how many Filipinos were in the city. It reminded me of a scaled down version of Orchard Road in Singapore and Central in Hong Kong, where on Sunday domestic workers from the Philippines would congregate on their day off. 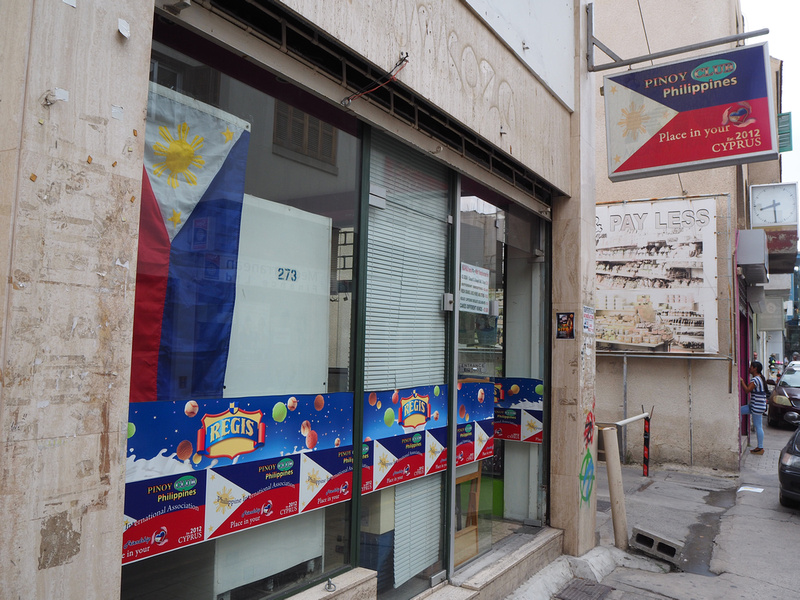 Not so much congregating here, but on a hot Sunday afternoon it was noticeable how many Filipinos live here. There is also a Vietnamese community here as well. 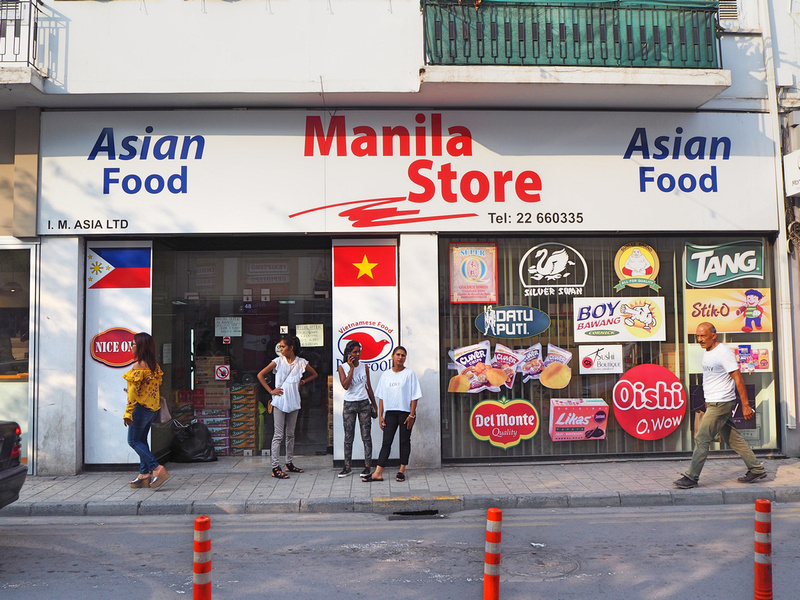 The old town has an eclectic mix of architectural styles, with grand 19th century buildings alongside 60’s modernist apartment towers. 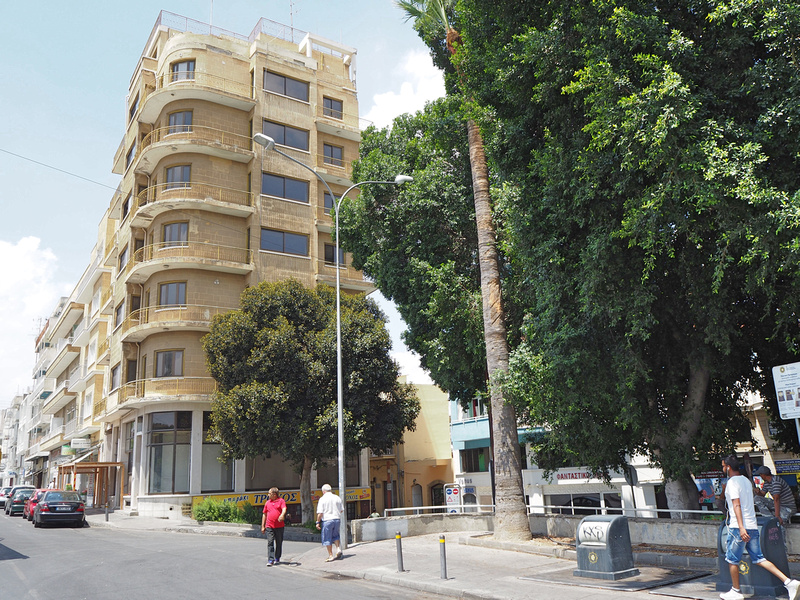 To get a feel of the city I also went wandering around the business district outside of the city walls. I told a Vietnamese friend I was visiting Nicosia, and it turned out the business they work for is registered here. Cyprus is a popular place to form a company, with the combination of low tax rates, being a member of the EU, English being widely spoken, and its geographical location. 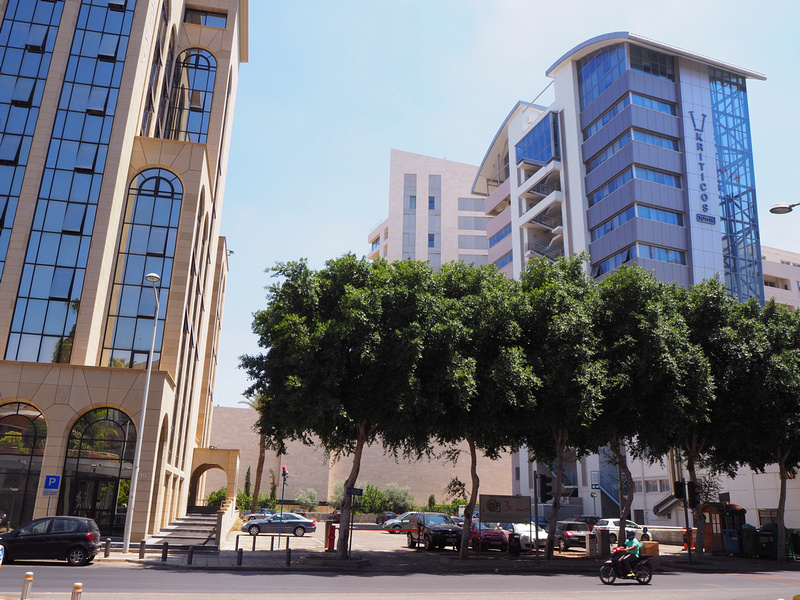 There are some interesting modern buildings going up, such as 360 NICOSIA (the tallest building in Nicosia). And sensibly these projects are built outside the old city. 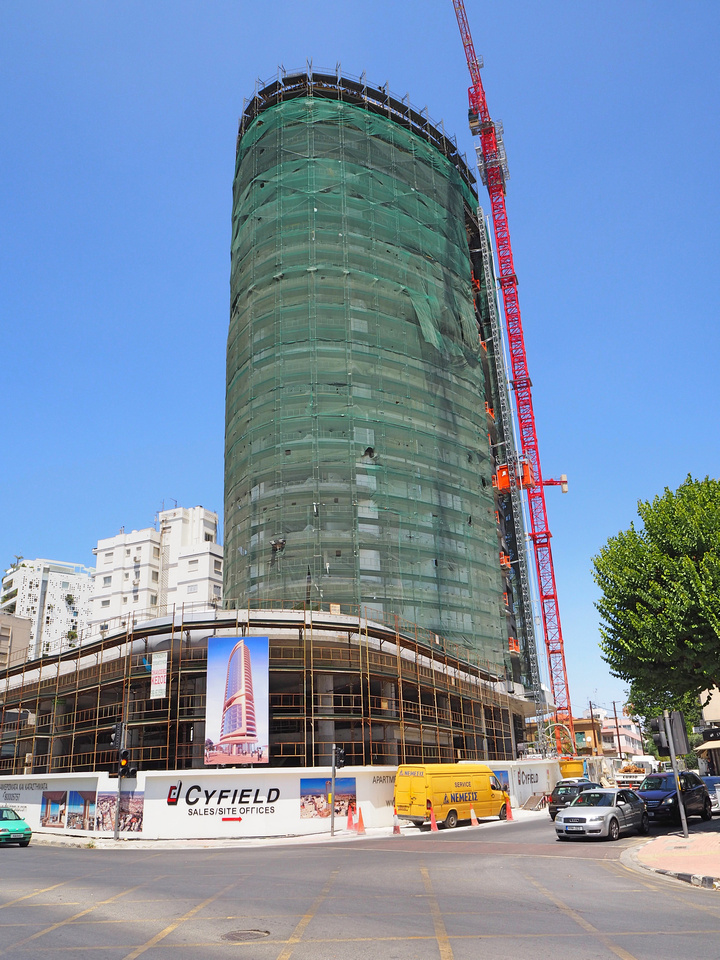 The best coffee I had in Cyprus was also in this area. When I saw the name Brew Lab on the map I knew it would be a cafe that would appeal to me. 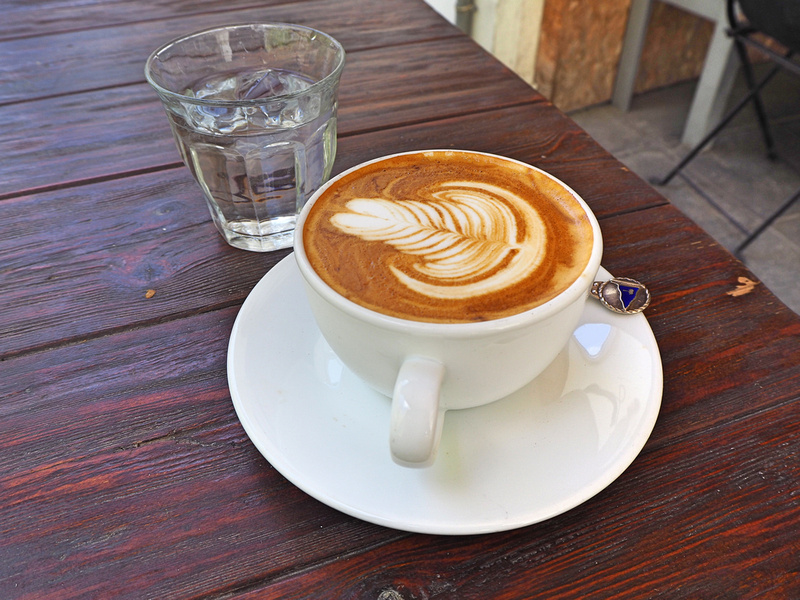 During my wanders of the old city I kept running into the dividing wall. The wall is heavily barricaded, and many of the shops and houses near the wall are abandoned. 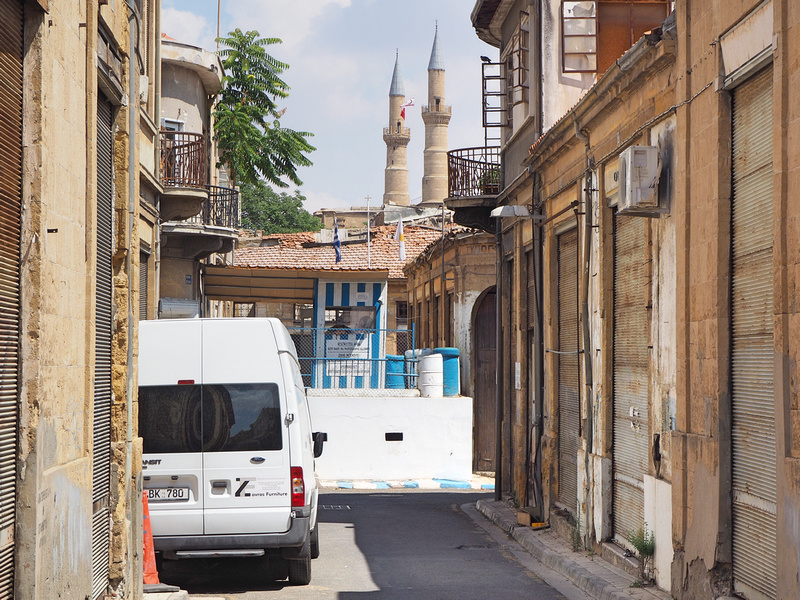 I was about to take a selfie at one location until I head a “NO PHOTO!” being screamed at me. 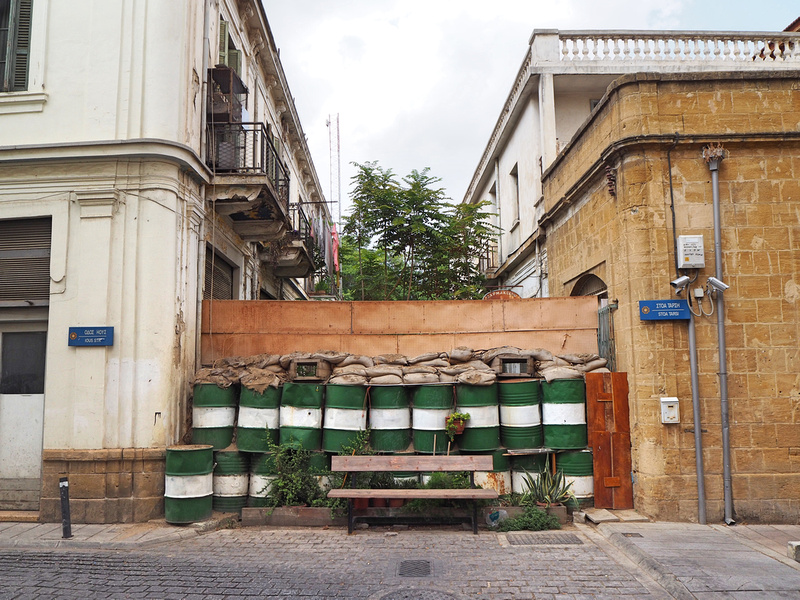 There is a UN buffer zone between the two walls. I would like to come back when the wall comes down (as it inevitably must) to see what it looks like. 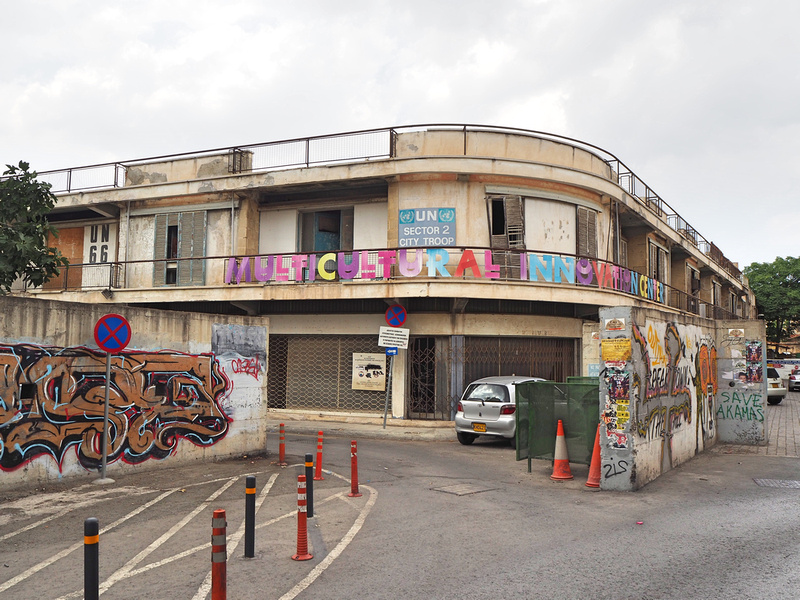 There was a time when you couldn’t cross the border by foot. The border was opened in 2008 after 34 years of being closed. There are other border crossing across the island, but this is the first crossing in the city centre. The border is at Ledra Street, which is the main pedestrian shopping street of the city. Just walk to the end until you get to the border gate. 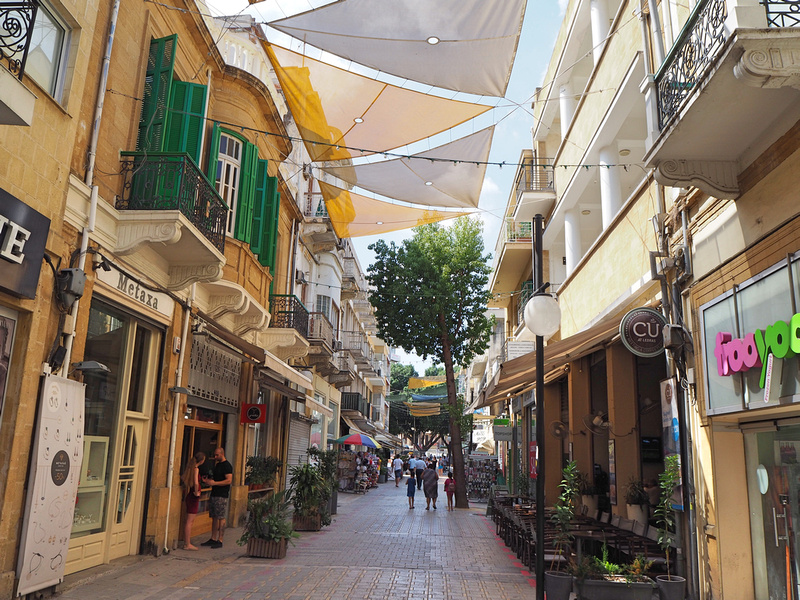 Crossing over to North Nicosia is a simple enough process. It’s treated as an international border crossing, so bring your passport. For those looking for a passport stamp, you won’t get one here. If a passport stamp is your mission you could fly in or out of Ercan International Airport (the main airport of Northern Cyprus). 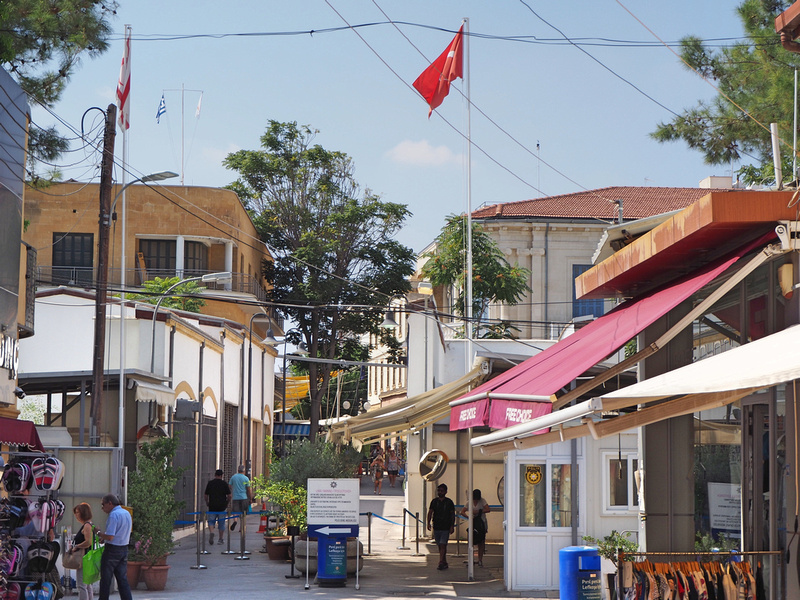 Once you cross into the north it is of course still architecturally similar, but there are immediate noticeable differences with the language and flags. And in contrast to Ledra Street with Starbucks, McDonalds, et al, the only chain I saw in the northern half was a Gloria Jeans cafe. 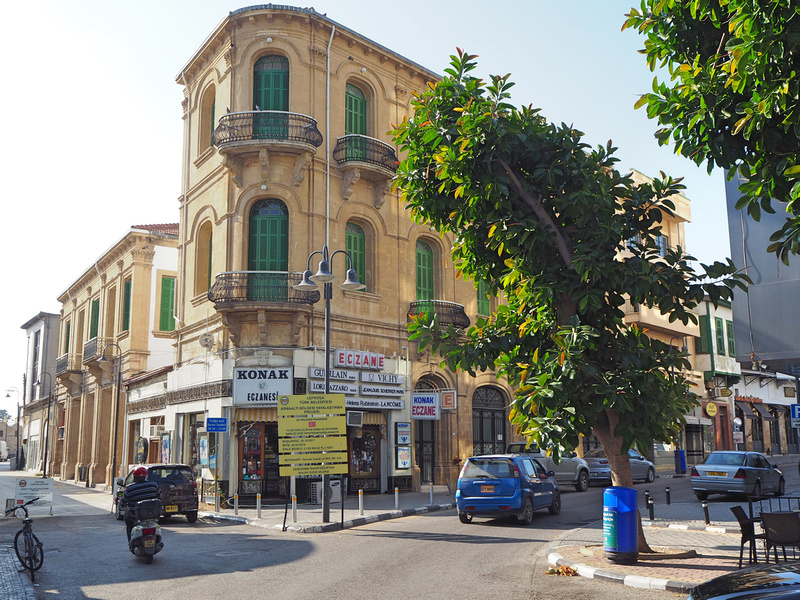 There are more mosques as well. 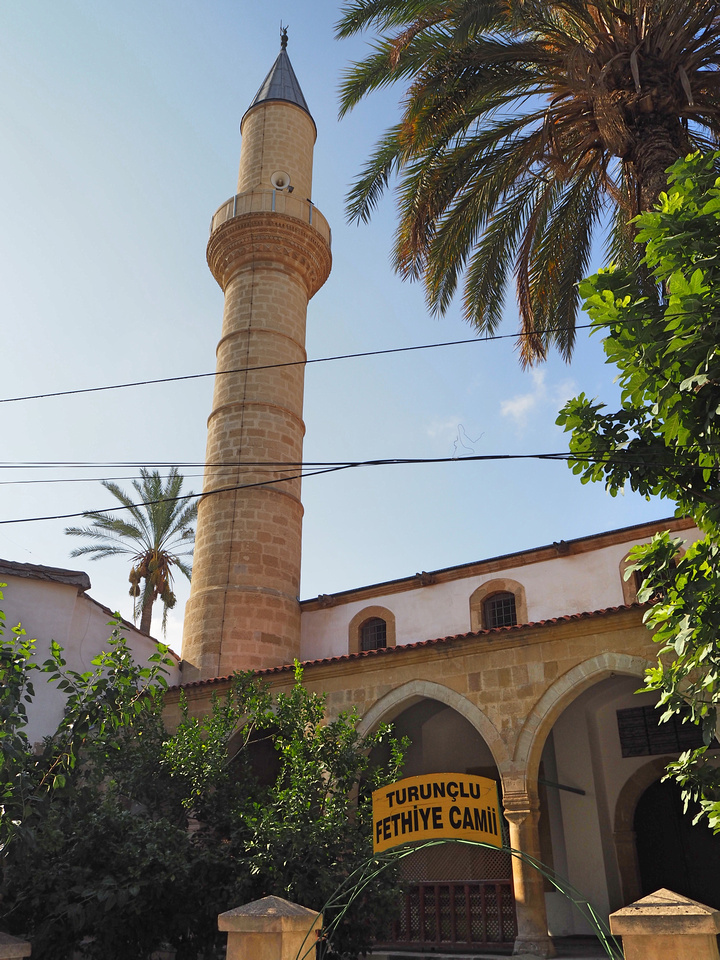 Near the border crossing there is a casino. I mentioned in my Cyprus blog post that Limassol is building the largest casino in Europe, so the casinos of Northern Cyprus will not be as much of a draw in the future. 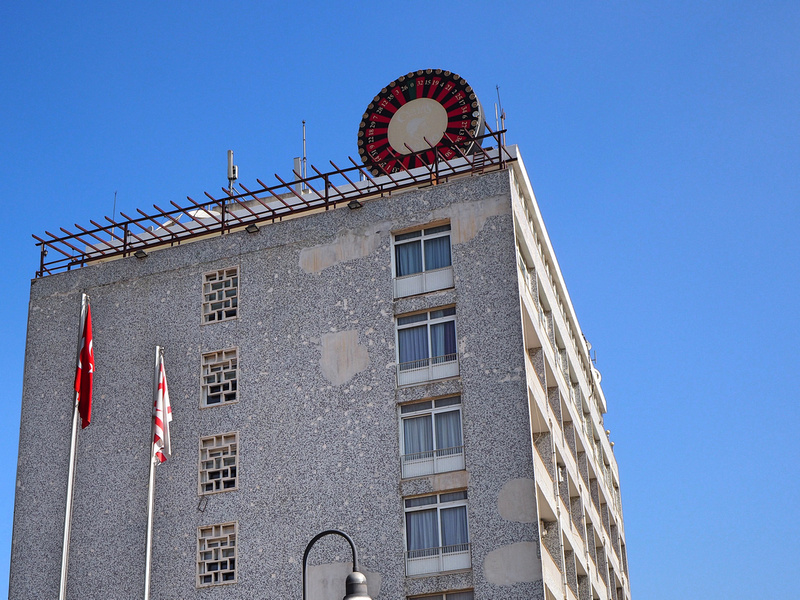 And of course there is an Ataturk statue. 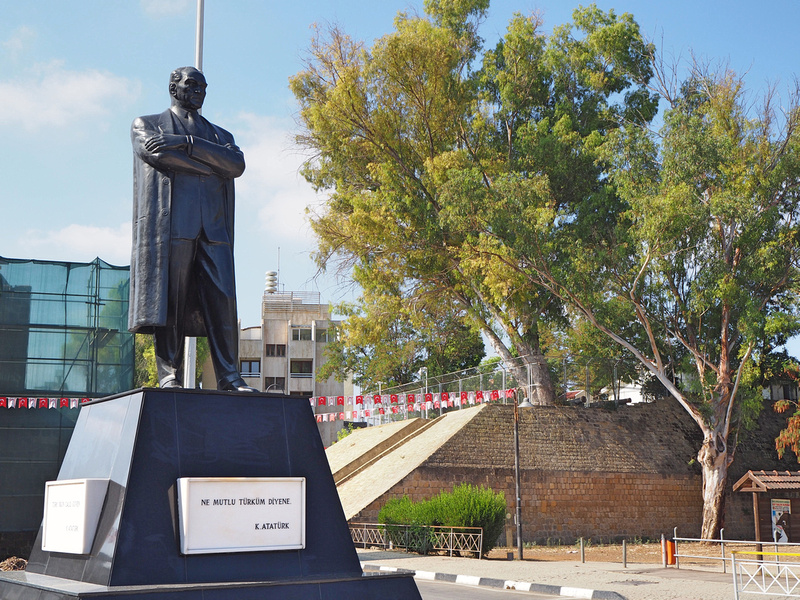 I walked around some of the sections of the wall, and near the Green Line there are reminders of the divided city.

This building reminded me of the skinny buildings of Vietnam. 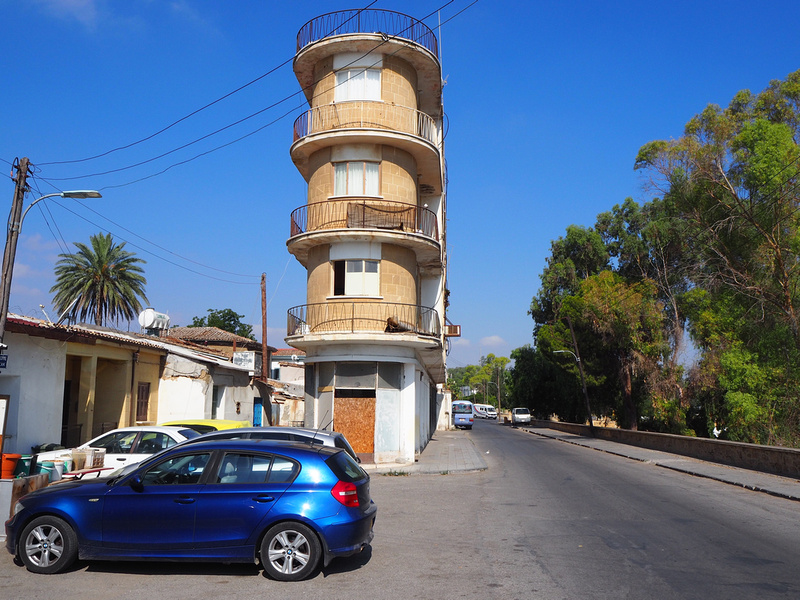 One thing I noticed here (and throughout Cyprus) was the maps of Cyprus on souvenirs showing a united Cyprus. Technically this is a correct map as it’s a map of the island of Cyprus in the Eastern Mediterranean, and what are borders but a man-made construct. 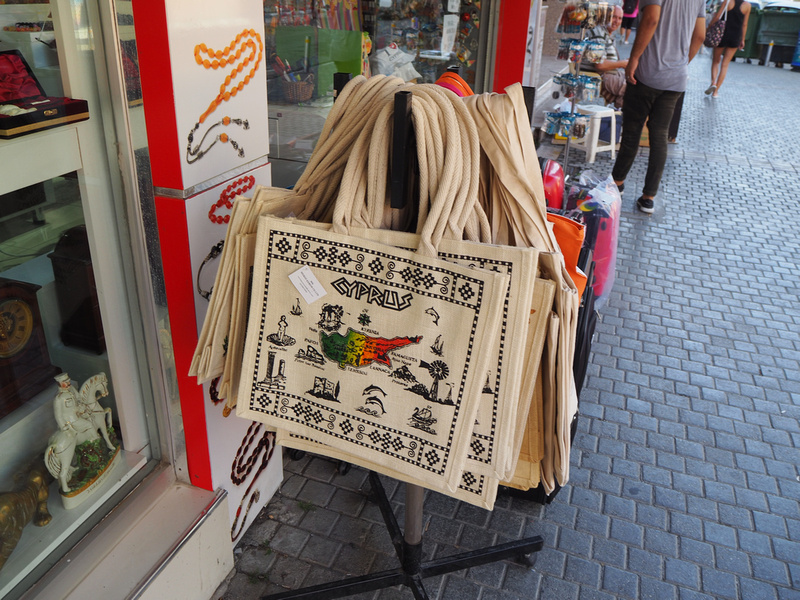 The tourist maps in North Nicosia also keep up the illusion of the city being in one piece. 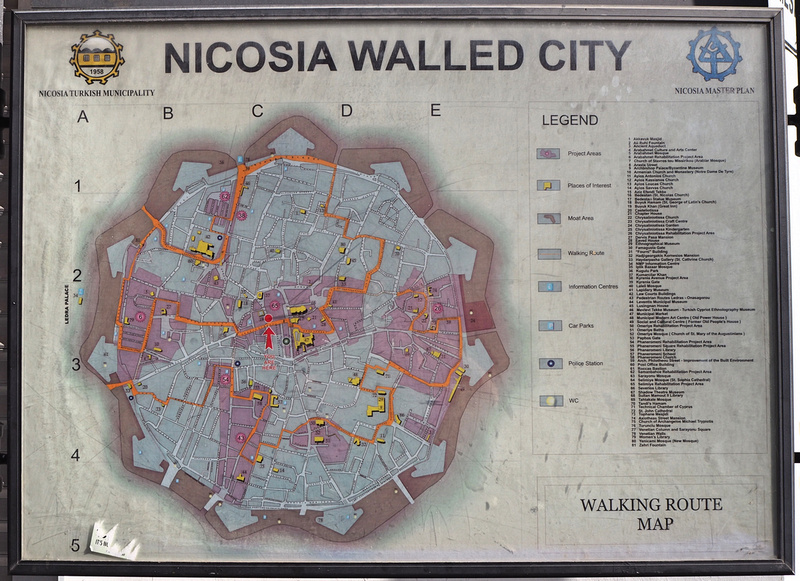 At this point there doesn’t seem to be any chance of reconciliation in the immediate future, but then such moments in history tend to be black swan events. The Berlin Wall seemingly came down from out of nowhere, even though in hindsight we sit here saying that it was obviously always going to come down.

In Cyprus there are those who are pushing for reunification, and there is also a faction that are pushing for permanent partition. So there is no telling if or when the city and island will be reunited, but I hope it’s as swift as the Berlin wall precedent. 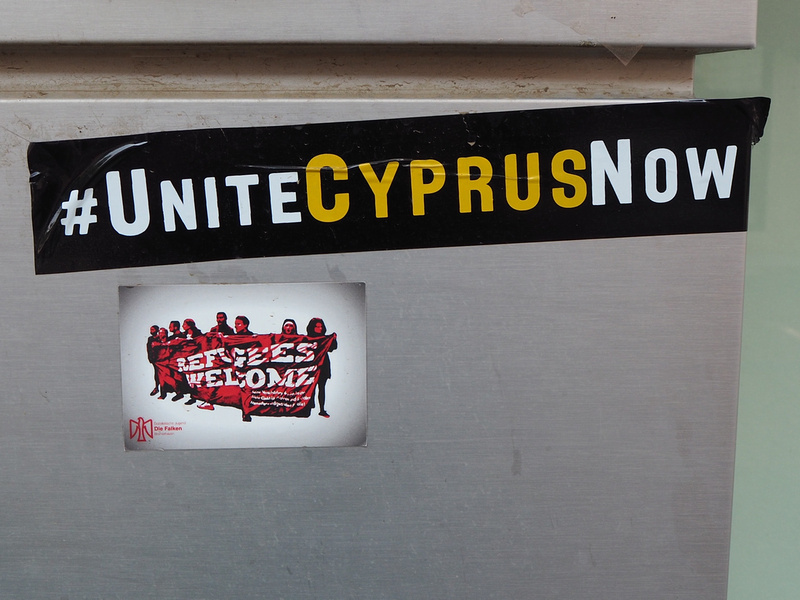 Many of my well-travelled friends also suggested visit more of Northern Cyprus. Unfortunately I didn’t get time on this trip, and there was already too many things I missed in the south. This article from Barbara Weibel about Nicosia is a good read regarding the situation in the north, and it had me wishing I included Famagusta on my trip.