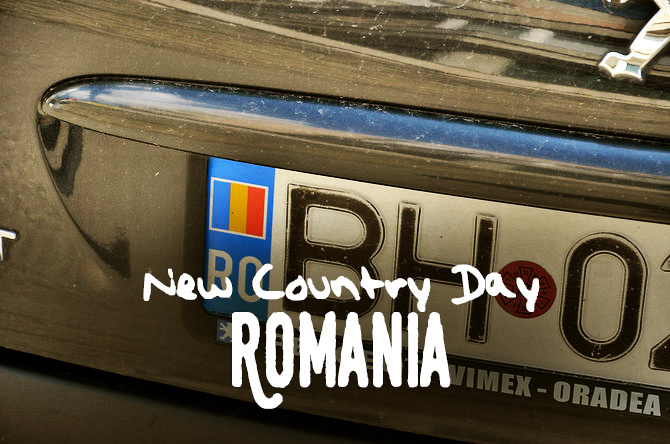 I have a tradition where I celebrate New Country Day – the first day in a country I’ve never been to. Technically I have been to Romania before, but I am calling this new country day. I never count airport layovers as a country visit, but what about border posts? I have previously trodden on soil at a Romanian border town, though I’m not counting that. Here is what happened.

In 2006 I was on my way to Romania from Budapest. On the train I was talking to a group of other non-European who mentioned needing to get a visa. A visa? I had not considered that I would need one. Australian passports are good to go for everywhere in Europe, or so I thought. I didn’t say anything, but I was sweating it out for the next hour while the train trundled towards the border. Passports were stamped at the Hungarian border, and upon arrival at the border town in Romania our passports were taken for processing.

Moments later everyone got their passport back, except me. Another customs official came on the train holding up a dark blue passport. They found the owner (me), and marched me off the train. Everyone on the carriage turned their heads like sunflowers as I did the walk of shame. There I was, Mr Long Term Traveller who forgot to check if he needed a visa. To be fair New Zealanders could at that point enter Romania no problem (everyone loves New Zealand), but for some reason Australians were required to get a visa (a few months later Romania joined the EU and a visa was no longer required).

I was taken off the train and stood on Romanian soil for the first time. From there I was taken to the station and to be interviewed in a run down office by two customs officials. They were friendly enough, but it still didn’t stop my imagination running away in all directions. I’ve always had a fear of customs officials in small dingy rooms, which probably stems from seeing Midnight Express as a young boy. I’m surprised that movie didn’t stop me from travelling at all. Ok, I’m not a drug runner, but I padded myself to make sure I didn’t accidentally tape blocks of hash to my body that morning (all clear). I once got a half an hour grilling in a small room at Newark when I entered the USA in 2001, which has added to my dislike of border crossings.

Fortunately the Romanian guys were soft on me. I was given a Romanian entry stamp, then it was crossed out in red with another stamp on top of it. From there I was driven to the motor vehicle border crossing and dumped there. The nearest town was over an hours walk away. I got back to Budapest the next day and discovered the Romanian visa questions to be so tedious that I didn’t bother applying.

It was a frustrating 24 hours, but weird things started happening after that. I went to a hostel to work out what to do next. While I was there I met a local girl who was to become my girlfriend for the next two years. Later on I met up with a guy who became a business associate and a good friend today. I don’t know when I would have come back to Budapest again, but due to not getting a visa for Romania my life changed in one day. strange how stuff like that happens.

So here I am, five years later, having another go at visiting Romania. While Romania is now in the EU, it is not in the Schengen travel area, so there is still a border control. Once again on the train from Budapest passports were taken for processing. There were few people on the train and it looked like I was the only non-European in my carraige. Once again a customs official come back on the train holding up a dark blue passport. Fortunately I was all clear. I am in Romania at last.