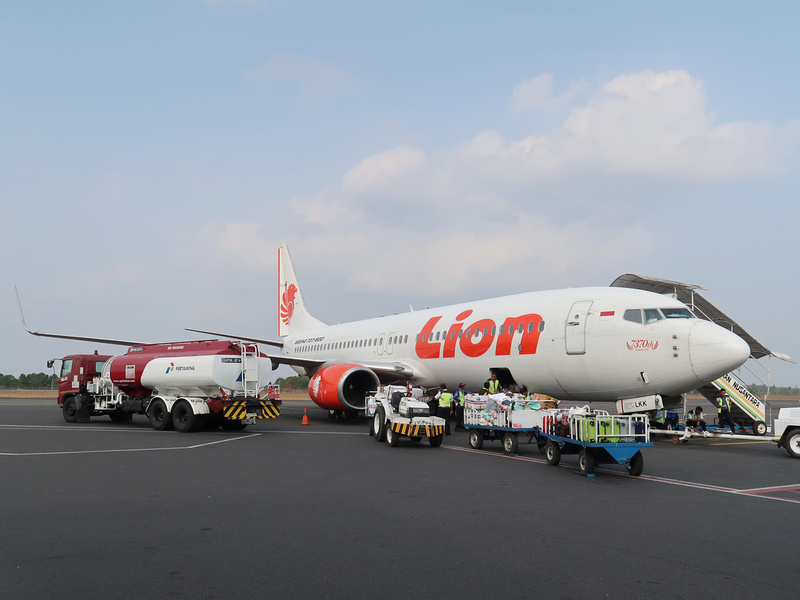 I flew with Lion Air from Bandar Lampung to Jakarta, Indonesia.

Bandar Lampung is at the southern tip of Sumatra, and the gateway city if you are coming from Java. My original plan was to get the bus/ferry/train combination, but not on this occasion.

This was a last minute flight after a change of travel plans, so I booked it the day before the flight. I compared flight options with Skyscanner and the flights I would have liked to take were already booked. My first option was a Garuda flight, but it wasn’t letting me pay online less than 24 hours before the flight. I settled on one of the few remaining Lion Air flights. 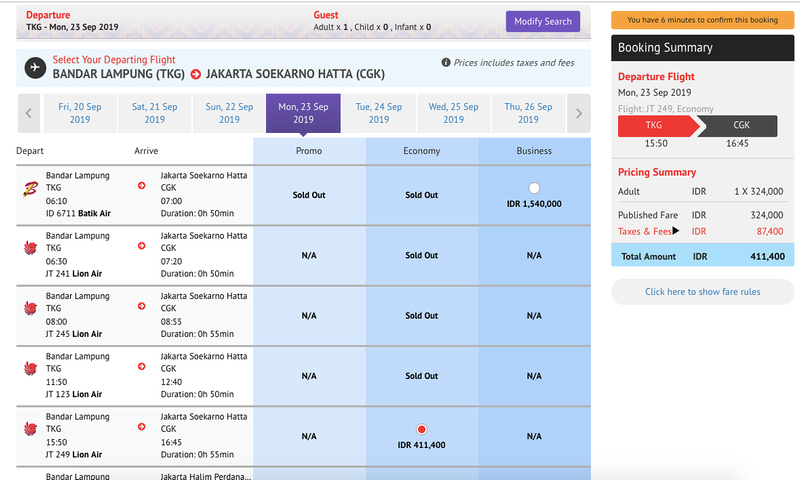 When it came to making a payment I also had problems on Lion Air. They wanted me to pay via ATM, which I have never done before and didn’t want to find out how it works so close to the flight. 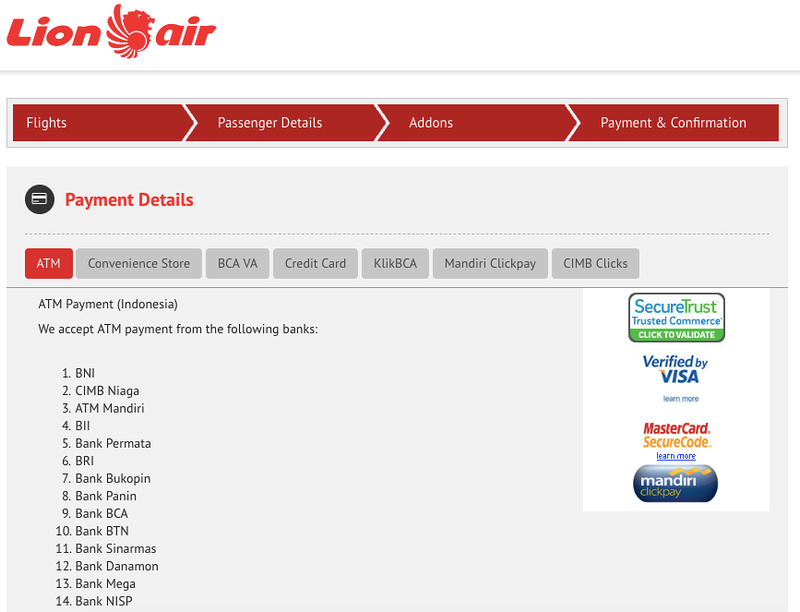 Fortunately when comparing flights on sites like Skyscanner, they show ticket prices via online travel agents. They showed the ticket option from Tiket (a large Indonesian booking site), and the price was a few dollars more than the airline site. Tiket is user-friendly, especially for travellers with international credit cards, so I went with that. the totoal price with a bag was 591,400 IDR ($41.80 USD), so it was a good deal for such a late booking. 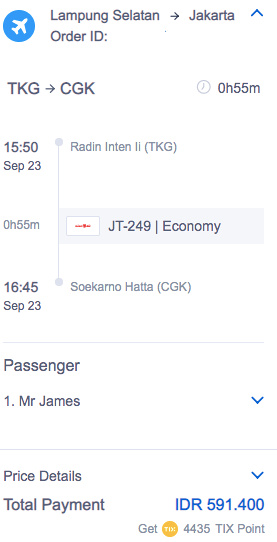 Lion Air is the largest airline of Indonesia, and the second largest low-cost airline in Southeast Asia after AirAsia. I have never flown them before, but I have flown with Thai Lion Air. If I consider AirAsia Indonesia and Thai AirAsia as the same airline, then I should consider Lion air and Thai Lion Air as the same. There are also other airlines in the Lion Air group, and I have flown with Wings Air and Malindo Air.

Radin Inten II Lampung International Airport (the official airport name for Bandar Lampung) is about 40 minutes drive from the city centre. When I arrived there was a large tour crowd blocking the airport entrance. In Indonesia bags are scanned before you enter the terminal, so that can slow things down. 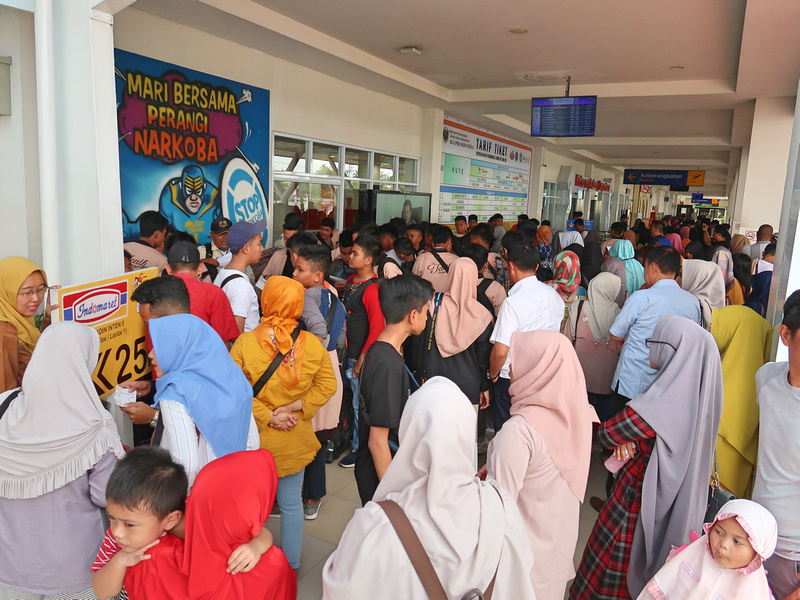 I had time so I retired to a cafe outside while waiting for the crowd to subside. 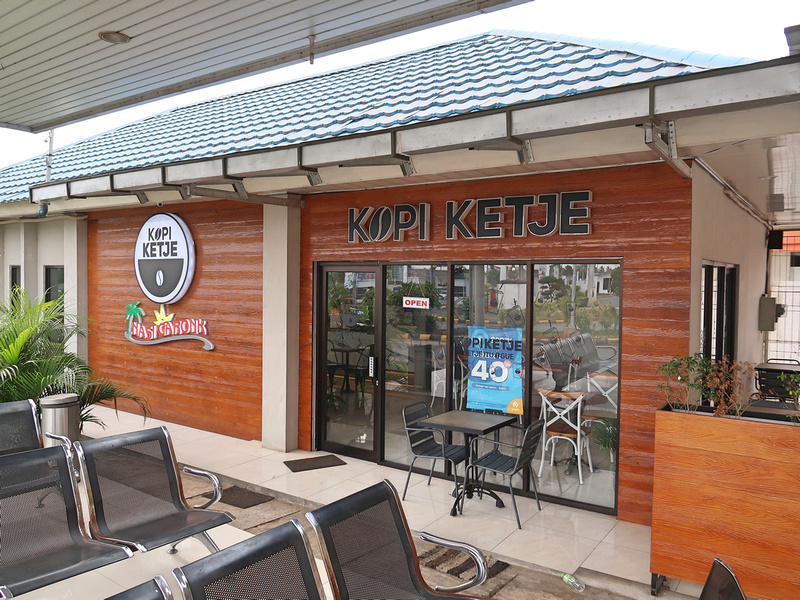 I noticed that they have fixed ticket prices for flights in Indonesia, so that would explain why my flight was so cheap even when booked so late. 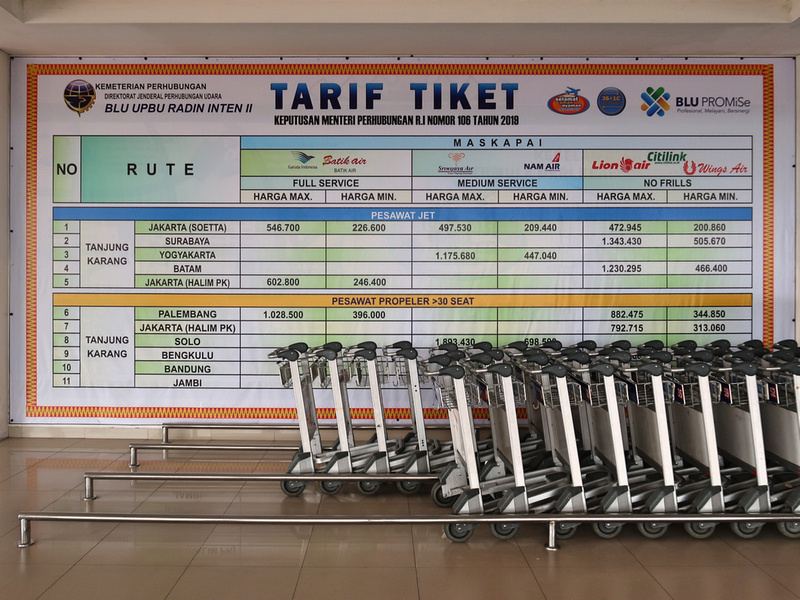 Once I was inside the terminal, checking in was a straight-forward process. 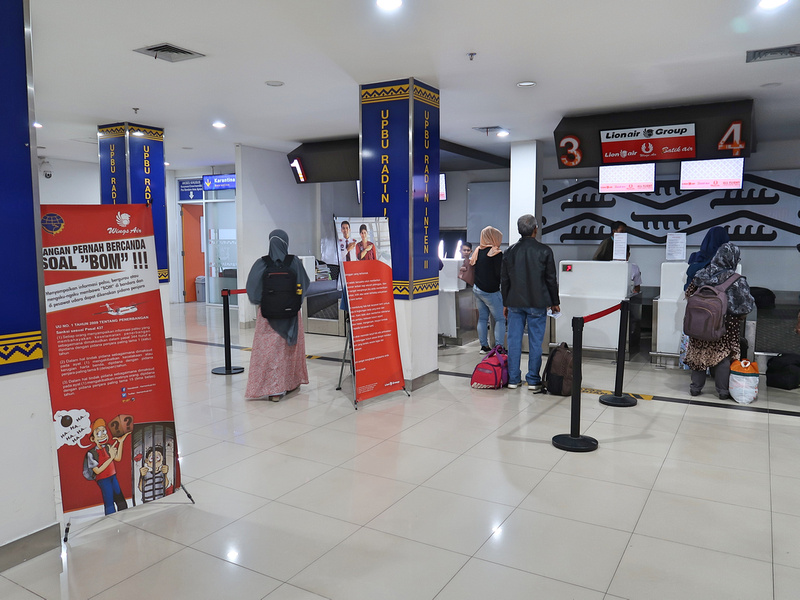 At the airport they have signs warning passengers not to make bomb jokes. 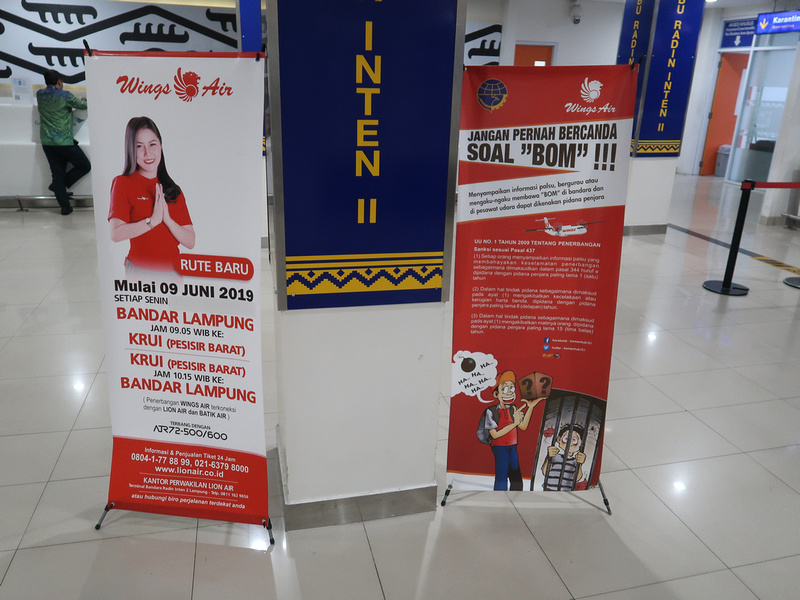 Bandar Lampung is a small airport, and it’s comfortable and spacious enough for the flights it serves. 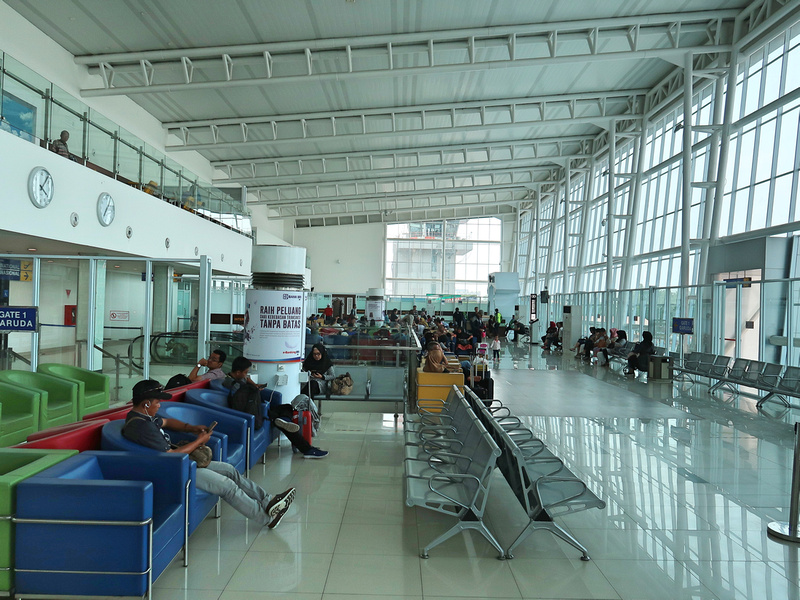 The airport has air bridges, though none were available for our flight.

Lion Air flight JT 249 departs Bandar Lampung at 15:50 and arrives in Jakarta at 16:45, for a schedule flight time of 55 minutes. Actual flight time is about 45 minutes so it’s just a short hop across the Sunda Strait. 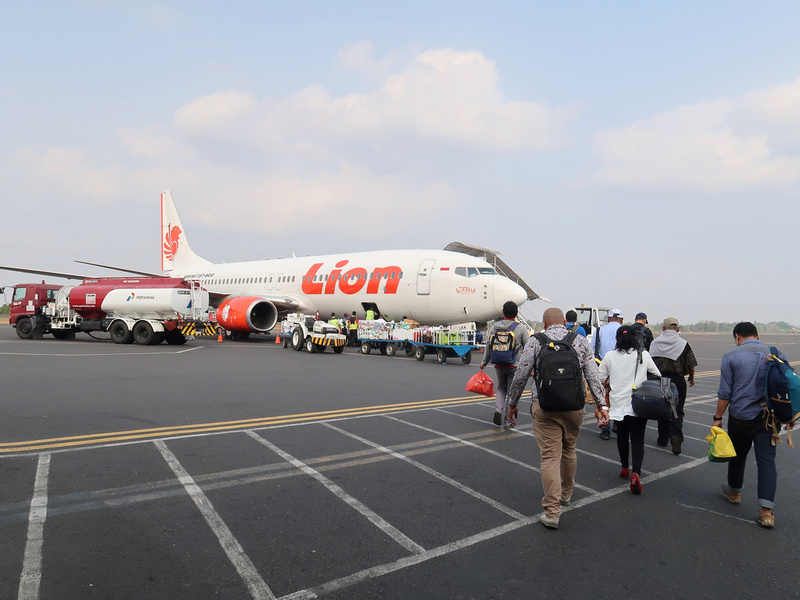 Lion Air doesn’t have the best reputation in the aviation world, with the Bali crash in 2015, and the high-profile Flight 610 with the malfunctioning Boeing 737 MAX. The MAX aircraft has since been banned from flying around the world, but it was still comforting to see the Boeing 737-800 written on the side of the plane. 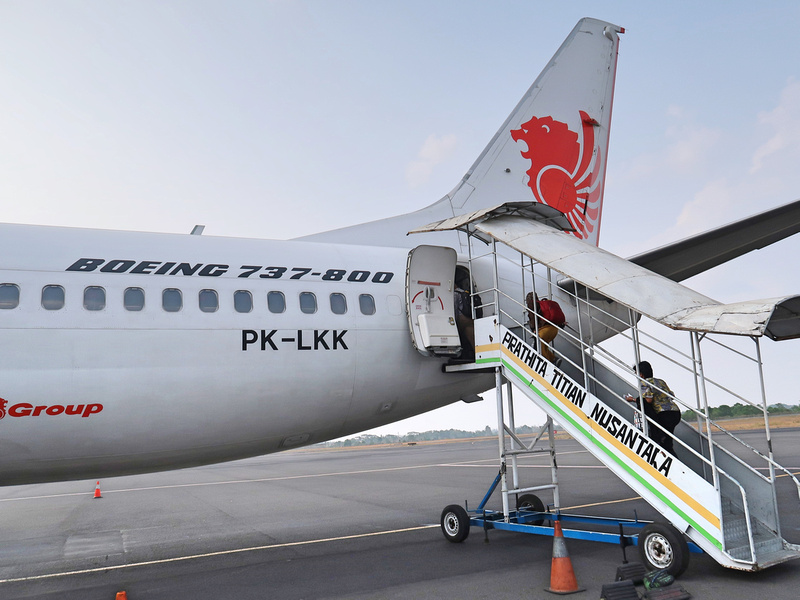 In addition to their many airline subsidiaries, Lion Air are now promoting their cargo service. 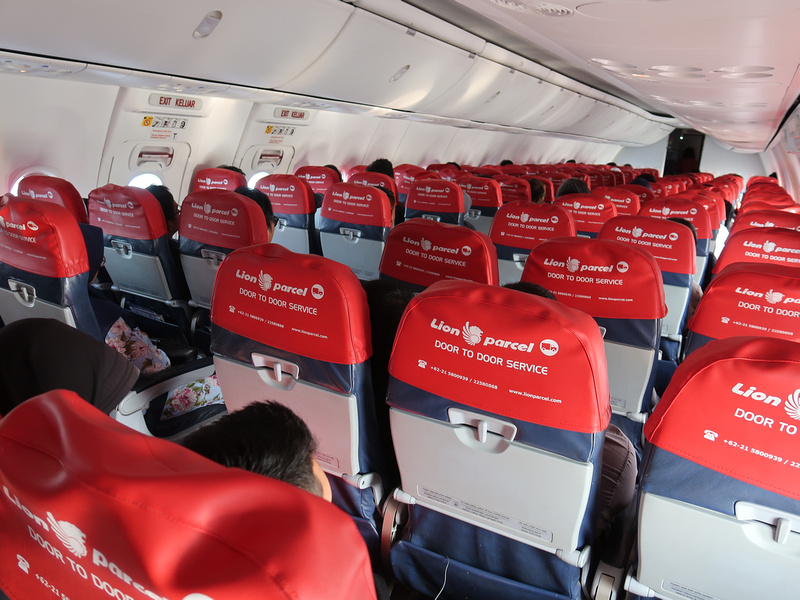 Lion Air is a low cost airline, so don’t expect any leg room. 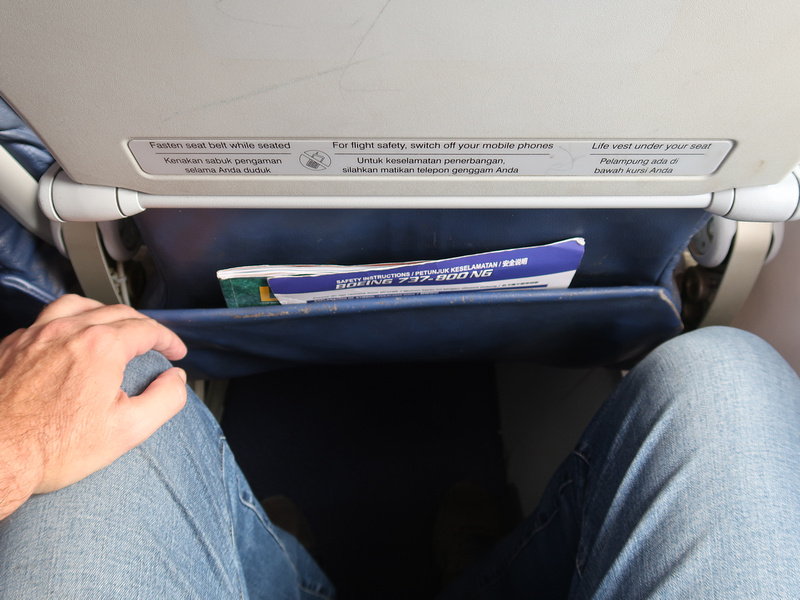 And part of the low cost model is to turn aircraft around as soon as possible. This means that aircraft are given a quick clean before the next flight. As such, sometimes rubbish is missed. 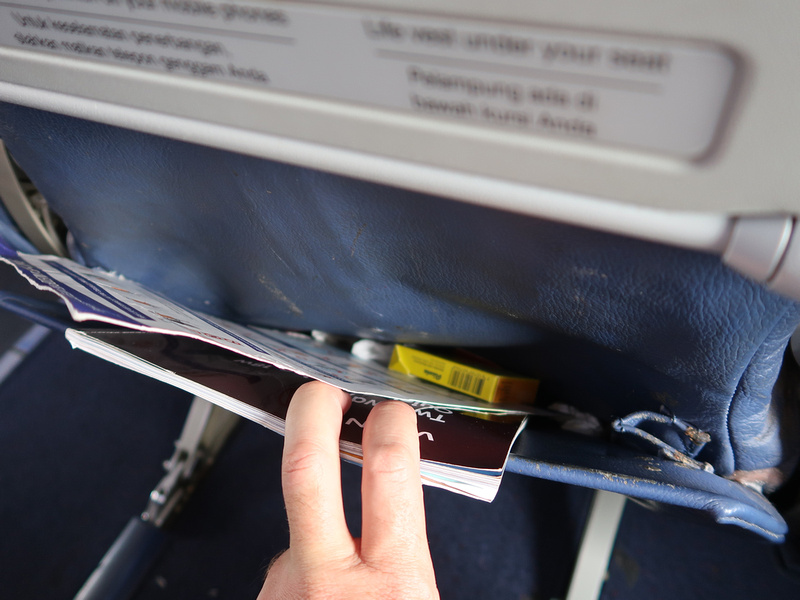 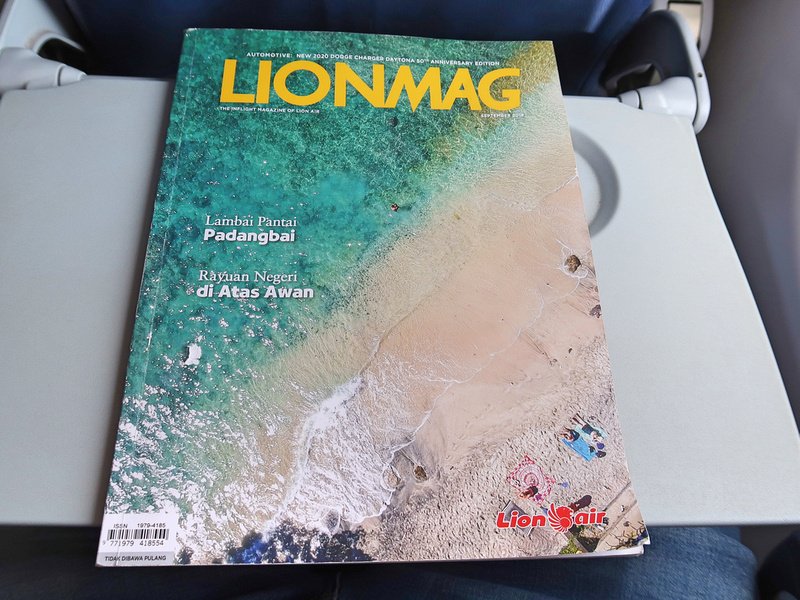 The route map of Lion Air and associated airlines. 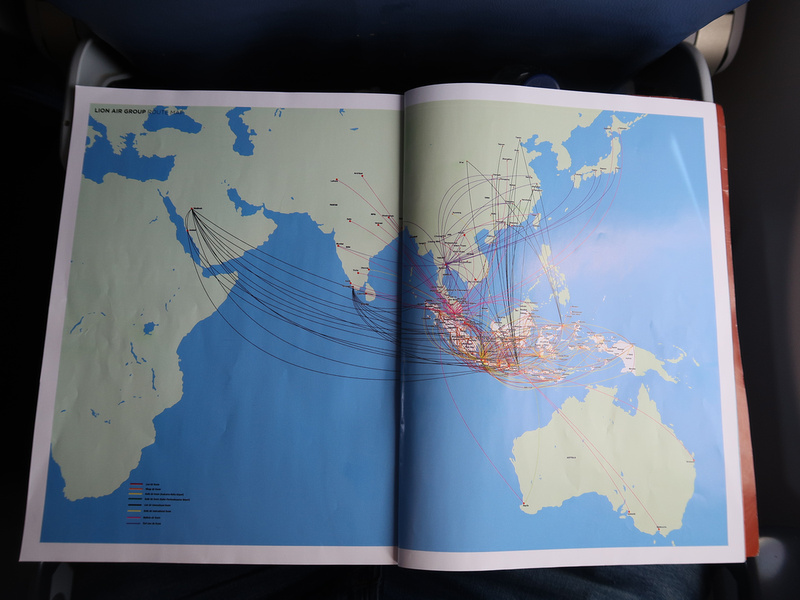 These are all the airlines in the Lion Air Group. 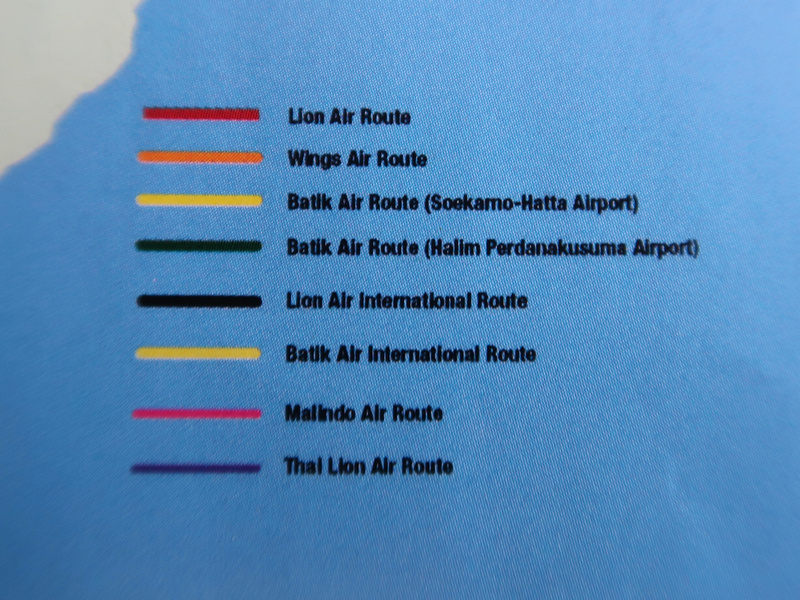 With so many airlines flying to so many islands around Indonesia, making a useful route map is nigh on impossible, but I still love route maps that show all the routes in its messy glory. 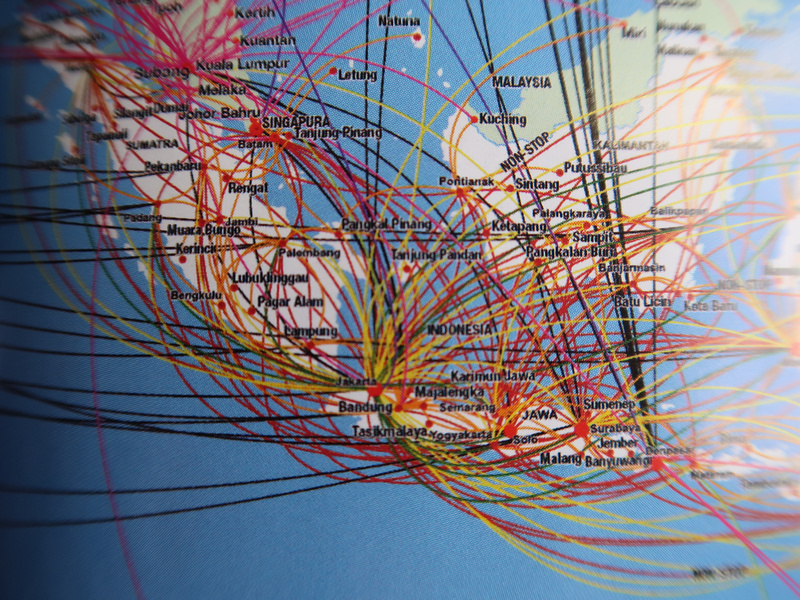 And here is the fleet of the Lion Air group. 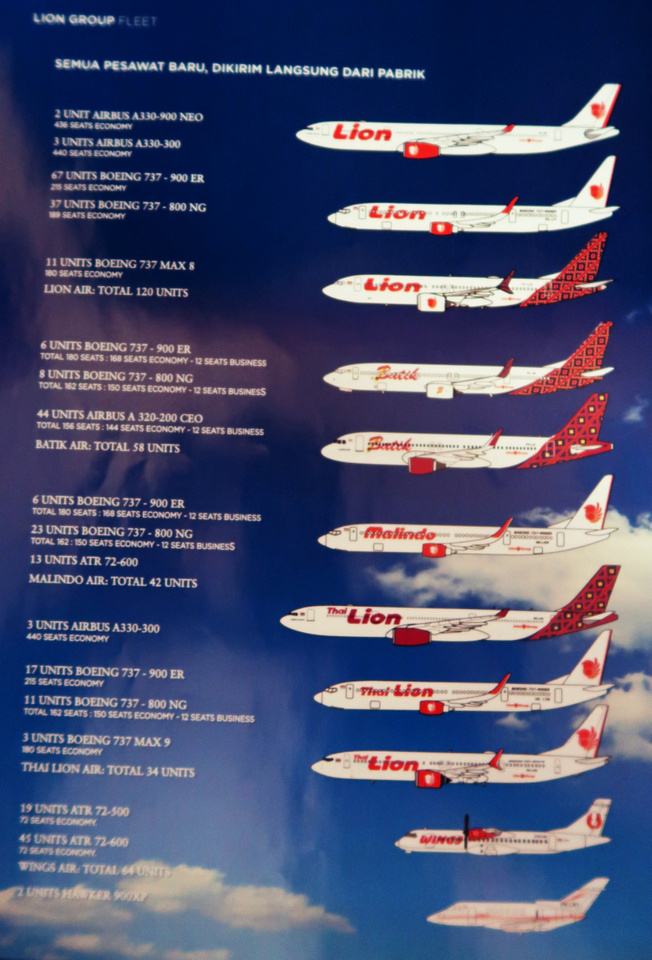 In what is a first for me, I don’t recall ever seeing an invocation card on an airline. 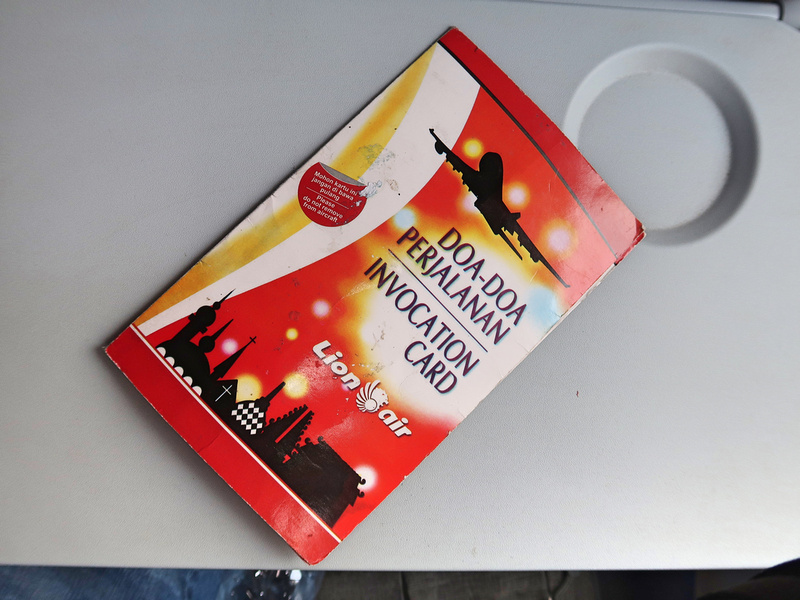 This card has prayers in Indonesian and English for the major religions of the region. I’m not sure if that instills any more confidence in flying with Lion Air. I pray I never have to resort to using it. 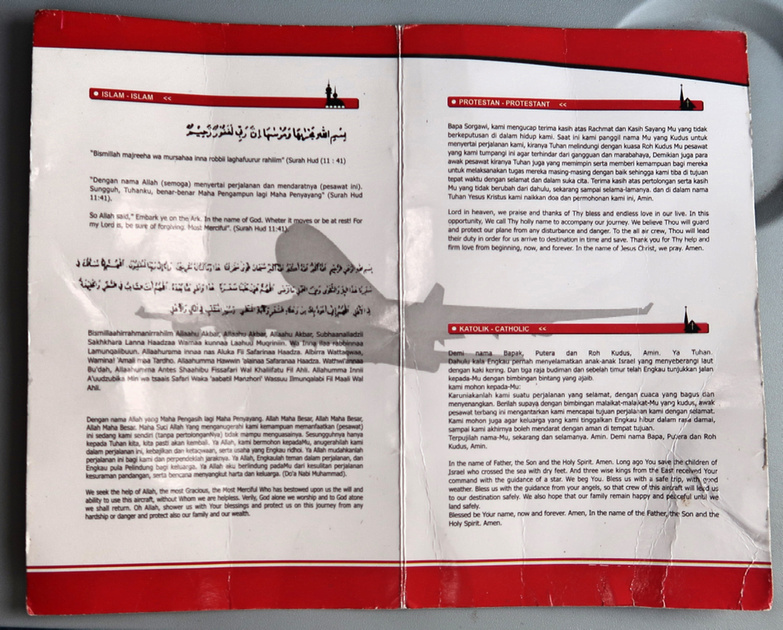 With such a short flight there is barely enough time to order drinks if you wanted. 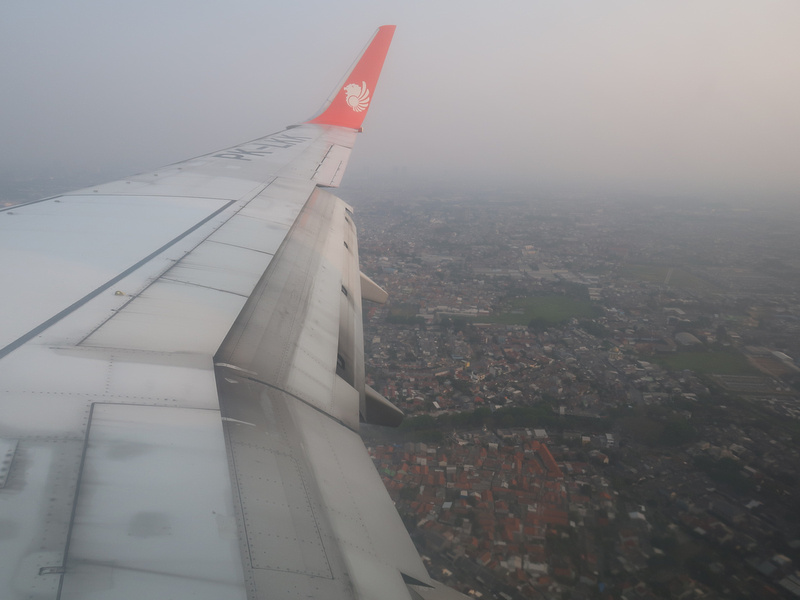 The flight arrived almost on time at Jakarta. 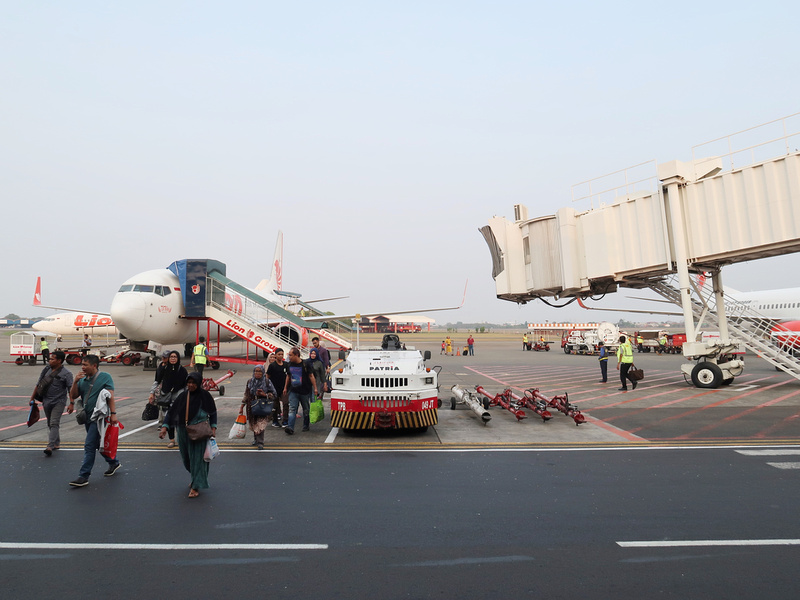 And my bag was also delivered in a timely manner. 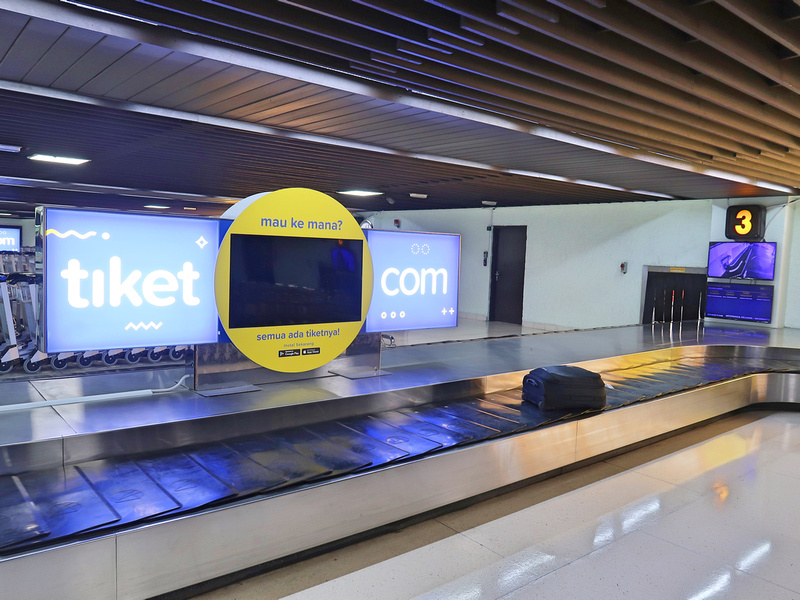 Part of my trip was to review new train services, and like in Palembang there is now a railway service from Jakarta airport to the city centre. I would have been reluctant to book a flight at arrives at peak hour in Jakarta, but knowing there is an airport train I booked this flight. 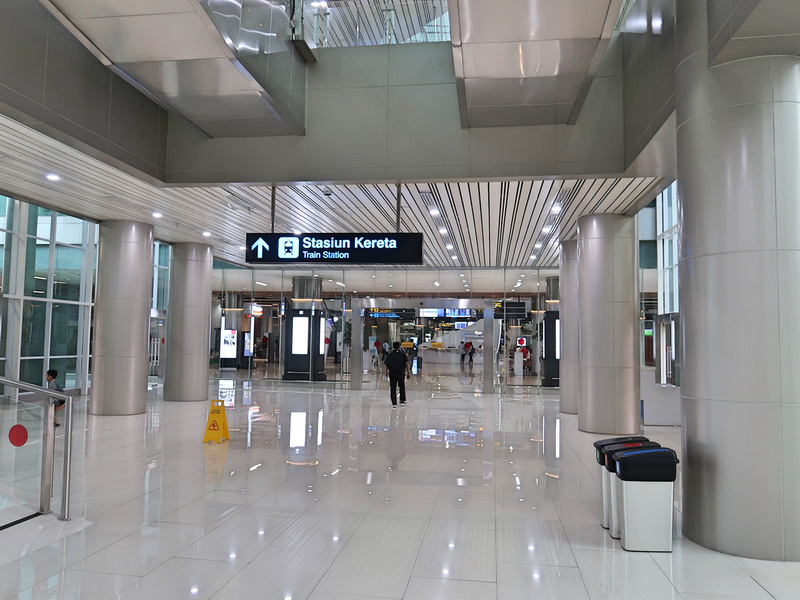 Overall this was a good flight option from Bandar Lampung to Jakarta.