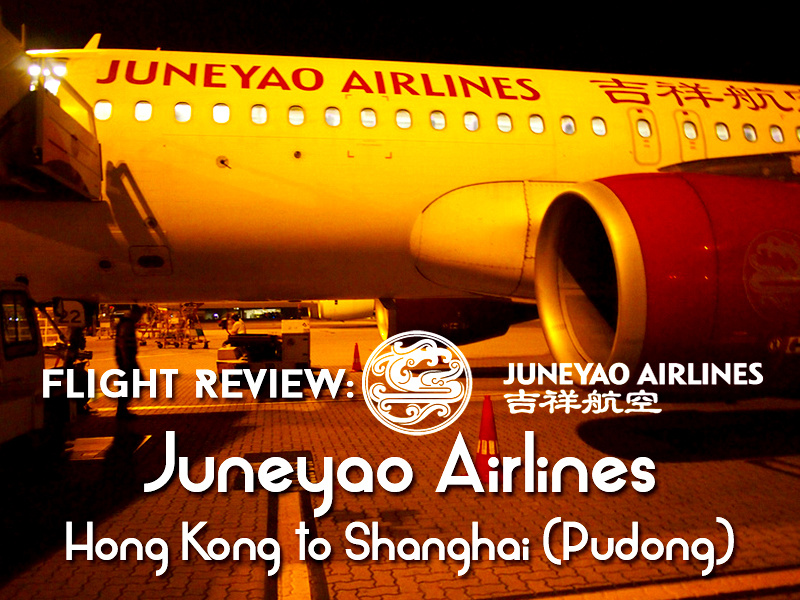 I flew with Juneyao Airlines from Hong Kong to Shanghai. I compared flights with Skyscanner and Juneyao was the cheapest of the lot.

It was also at the worst possible time, departing at 22:25 and arriving in Shanghai at 1:20 in the morning. The price difference was big enough for me to suck it up and take the late flight.

I had never heard of Juneyao Airlines before so I had to look them up. Juneyao Airlines (pronounced ju-ne-yao and meaning “auspicious airlines”) is based in Shanghai, China, operating domestic and international flights from both Shanghai airports (Hongqiao and Pudong). At the time of my flight they had just celebrated their 10th anniversary and have a fleet of 64 aircraft serving 70 destinations.

When I checked in I didn’t even consider that they might be part of an alliance, but it turns out they are now a connecting partner with Star Alliance. This doesn’t mean they are a full member, and it is unclear if you can earn points. I tried to add my flight details afterwards on my United account, but there wasn’t any option to add points from Juneyao. I would still present your number upon check in, just in case.

The flight departed from Hong Kong at the 200 Gates – the satellite terminal. 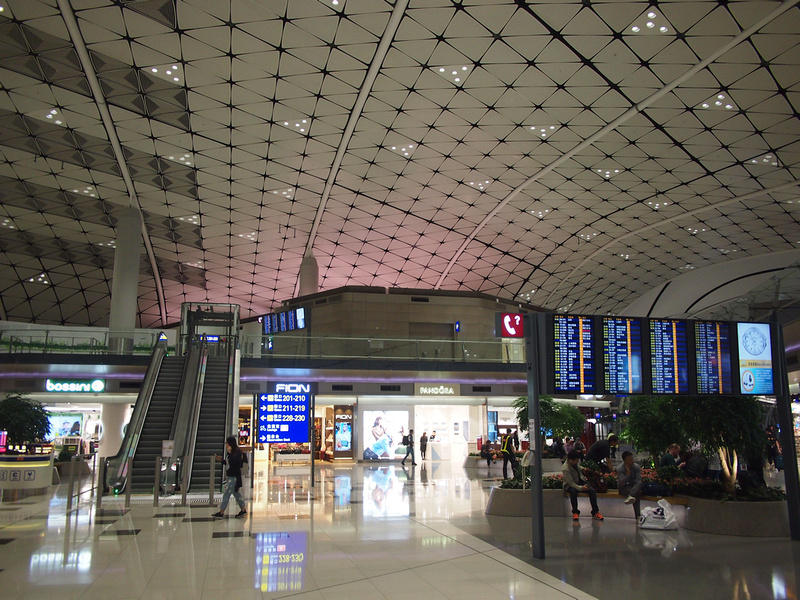 And for tonights flight it is boarding via bus on the tarmac. 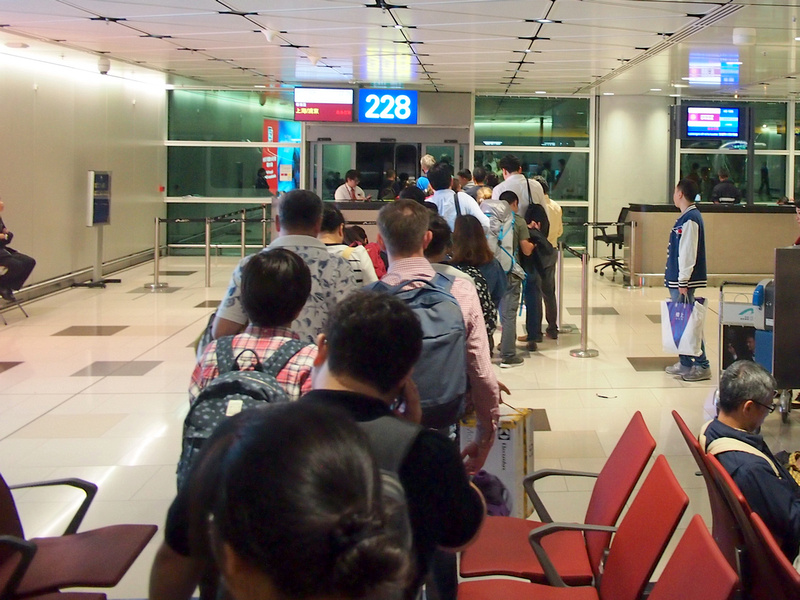 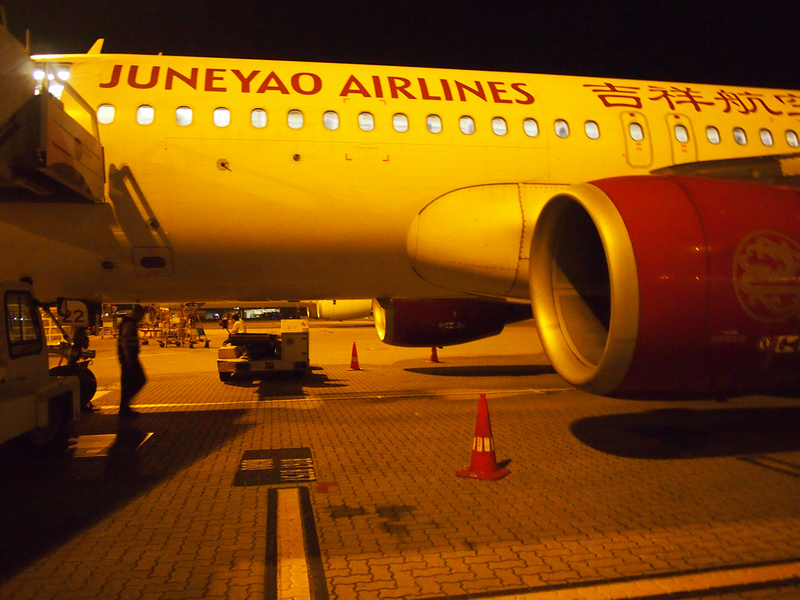 The QR code of Juneyao Airlines – a ubiquitous feature on every Chinese business now. 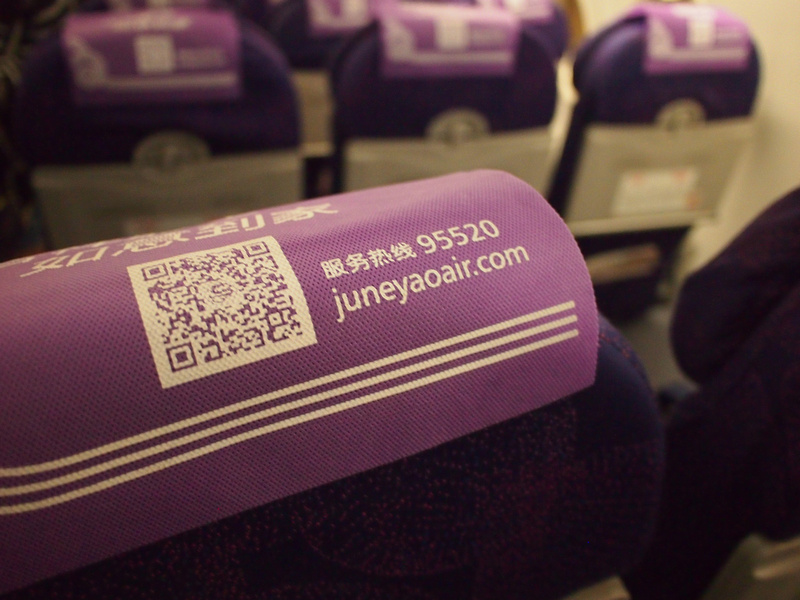 The Moment – the inflight magazine of Juneyao Airlines. Despite the English title the magazine is in Chinese. This is a common style for magazines in Asia. 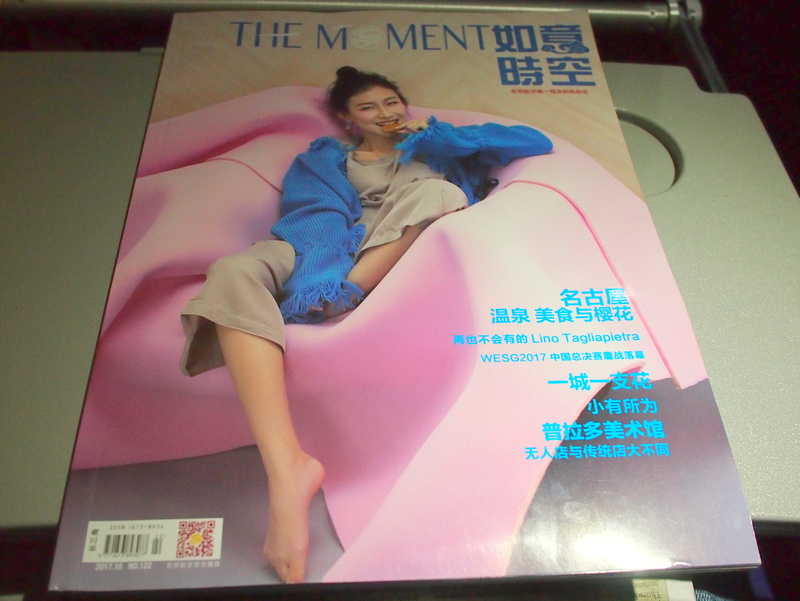 I always read the magazine for the route map. Unfortunately the route map has no route lines so good luck trying to work out where they fly to and from. 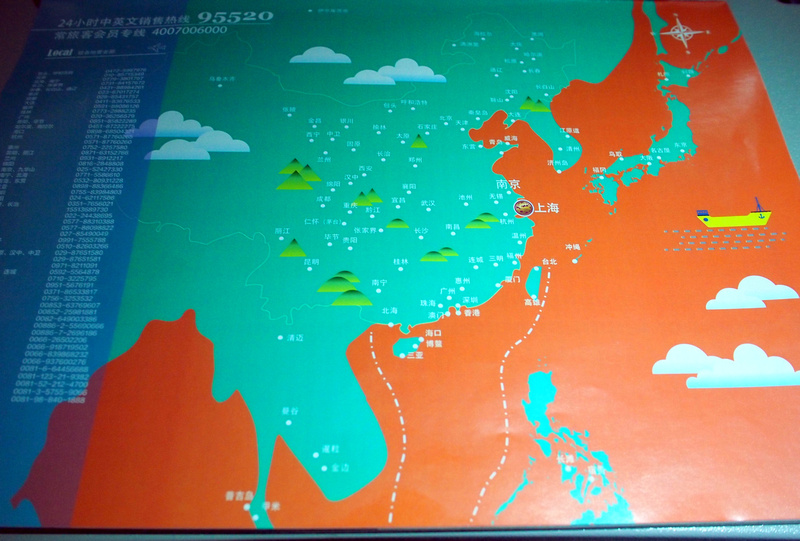 Newspapers are offered to read onboard. 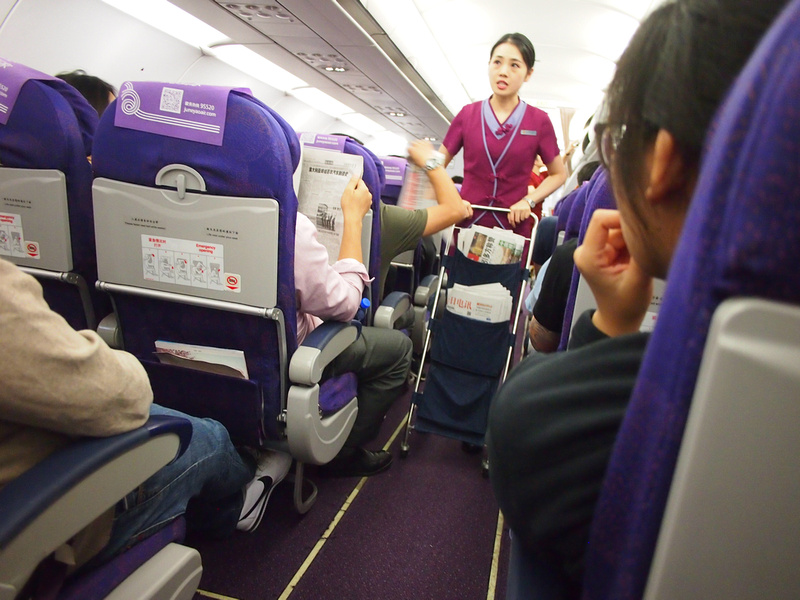 For English speakers they have Global Times. 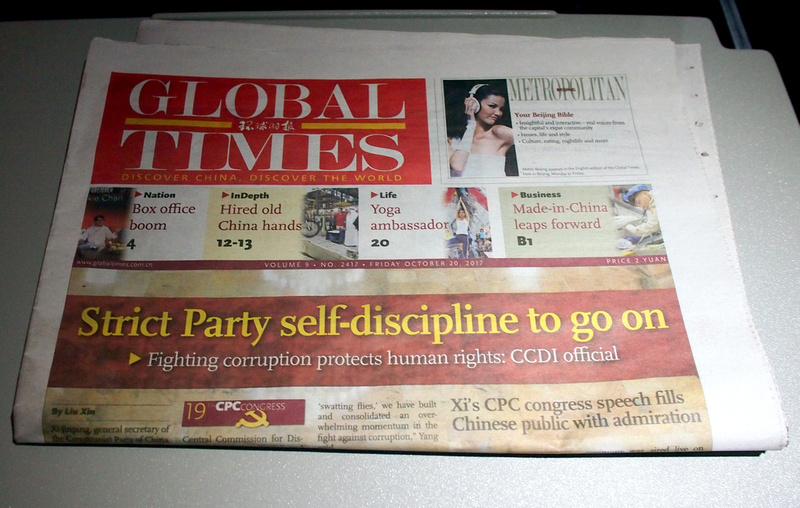 I was flying into Mainland China in the midst of the 19th National Congress of the Communist Party of China, and the paper was overflowing with praise for the Party. 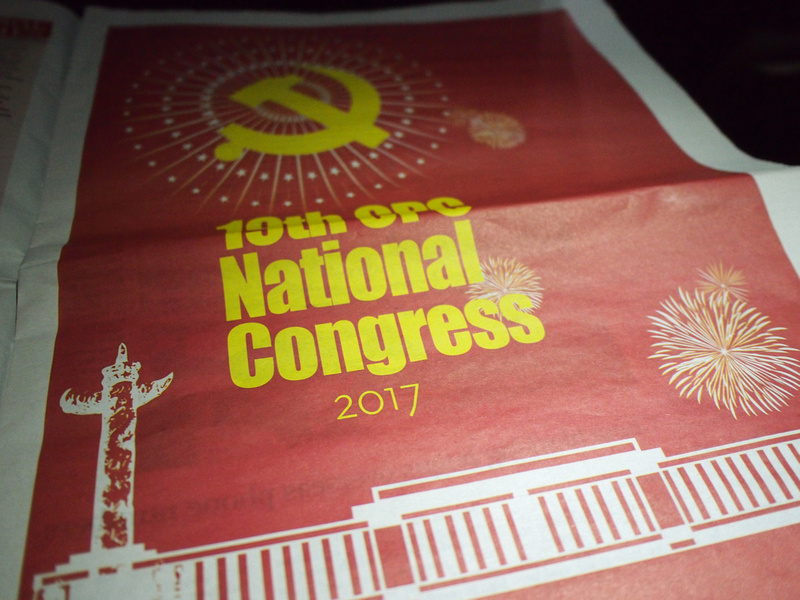 I wasn’t sure if this was a low cost airline or full service airline, so I ate a hearty dinner at the airport. A snack box is served onboard, so not quite a meal but enough things here to keep you sated. 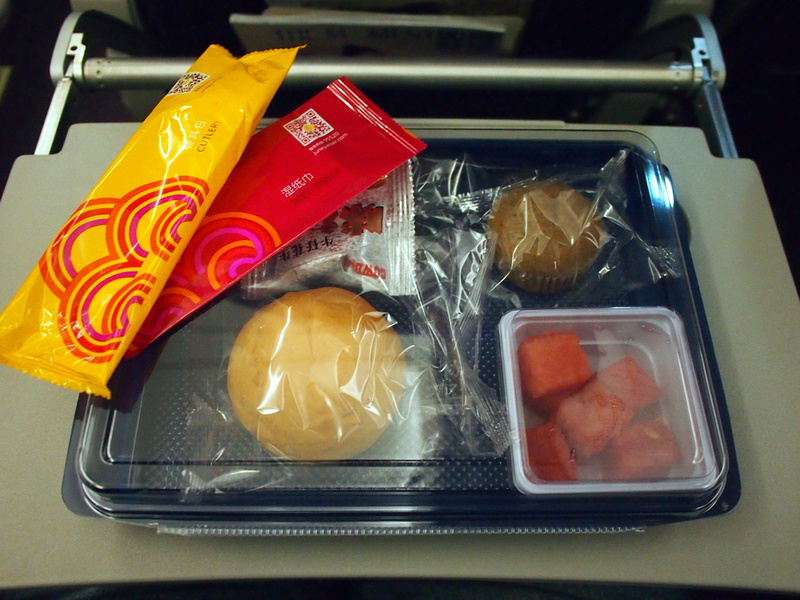 The box included a bread roll, muffin, fresh fruit, and peanuts. And everything is wrapped in plastic, making it the most leftover waste I have seen on any flight. 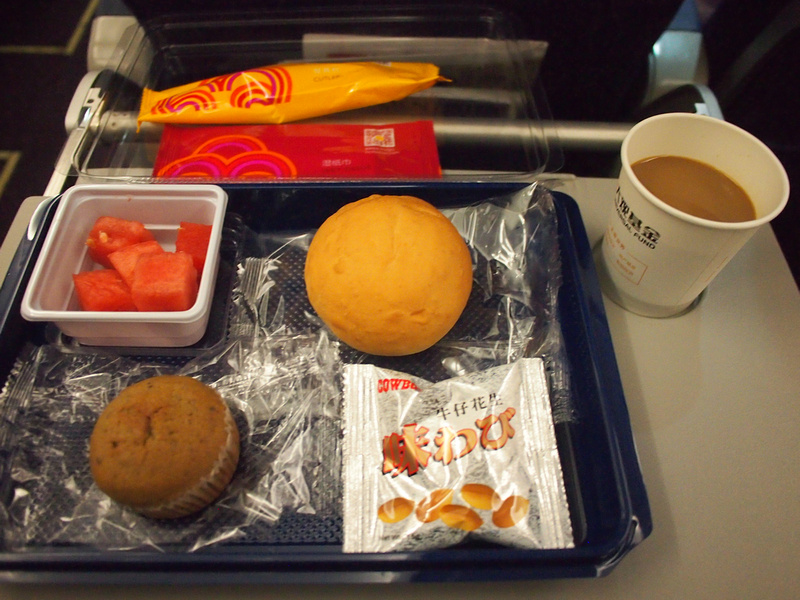 The scheduled flying time is 2H, 55M, and actually flying time is about 2 and a half hours. We arrived on time at Shanghai Pudong, and they parked the plane far from the terminal. 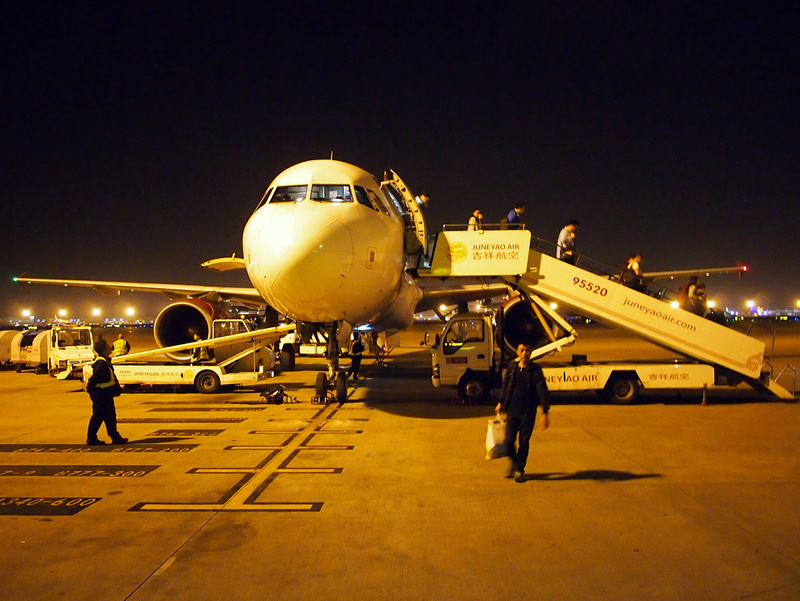 I was travelling to China on the transit visa that lets you visit certain cities for 144 hours. I was the only person the the short term visa queue, so that made my night better. 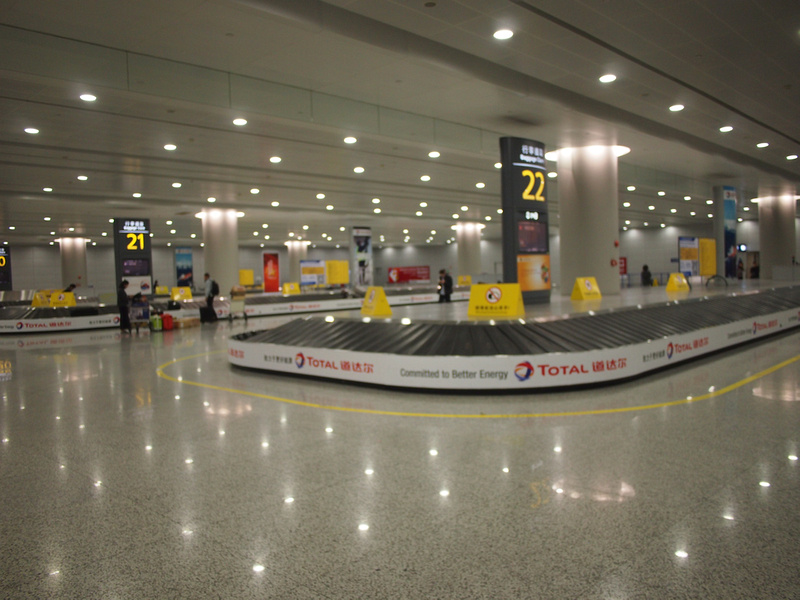 I was staying at an airport hotel near Pudong so I didn’t have to worry about getting into the city. If you are arriving this late the metro has stopped running by then. There is a special night bus though that runs through the night to central Shanghai.

Overall this was a good flight from Hong Kong to Shanghai. I would have preferred a better time of day, but I was happy to save money.