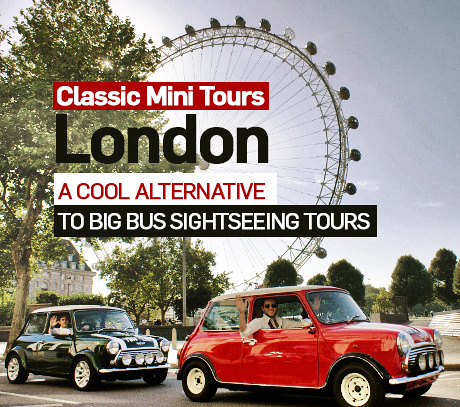 I have lived in London for two years of my life and I visit once a year for work. In all that time I have never been on a tour. The idea of getting on one of those big buses has never appealed to me.

So when I was contacted by smallcarBIGCITY and offered a ride in a British design icon, I found myself on my first tour of London.

smallcarBIGCITY provide retro tours of London in classic Mini Coopers. The Mini’s range in vintage from the 60’s to the 90’s, and the tour guides/drivers dress the part in period 1960s uniforms. They bring swinging London to life – Italian Job style. 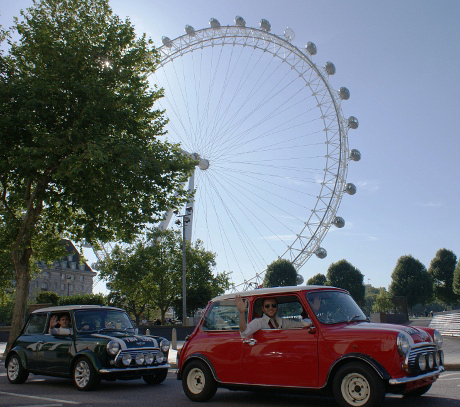 I was met at my selected location by co-founder and driver Oliver, and fellow guide Alastair. When I saw the Mini I was wondering how a 6 foot guy would fit. I was about 4 foot when I was last in a mini. I had visions of me like a circus clown with my knees hanging out of each window. They turn out to me more roomier than than they look (like Dr Who’s Tardis).

The advantage of a mini over a bus was shown as soon as we started. Being able to squeeze through small traffic lanes is a big advantage in the maze-like streets of London. If there was a car built driving in London it was the Mini. At one point we veered off Whitehall (the road between Parliament and Trafalgar Square) down a narrow side alley to see a point of interest. Try doing that in a big tour bus.

I did the A-list Tour, which covers the essential London for tourists checklist. Having lived in London I thought I knew a lot about the capital and I didn’t think I would learn much from this tour. Boy was I wrong. I found out all sorts of interesting facts about places that I have walked past dozens of times previously. These guys really know their history, and as a fellow Londophile I had a great time sharing their passion for all things London.

smallcarBIGCITY have a number of tours to choose from, and you can be picked up from any location in Central London (Zone 1 on the tube map). They also provide bespoke London tours to your own requirements.