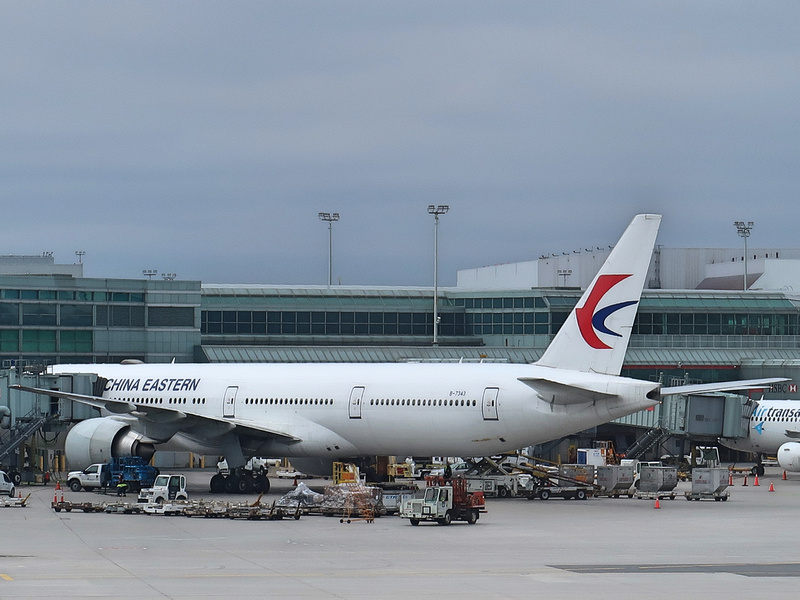 What was odd about this was that I originally had a booking with Cathay Pacific direct from Hong Kong to Toronto using points, but it was cancelled due to a booking error. I would have thought that a code share with an alliance partner would have overridden the non-alliance partner. Such are the vagaries of airline alliances these days.

I went with the China Eastern flight as it left Hong Kong in the morning and arrived in Toronto in the afternoon, so there was no overnight flying. I’ve flown with China Eastern on a domestic China flight, but this was my first international flight.

Before the flight I went online and reserved an aisle seat. 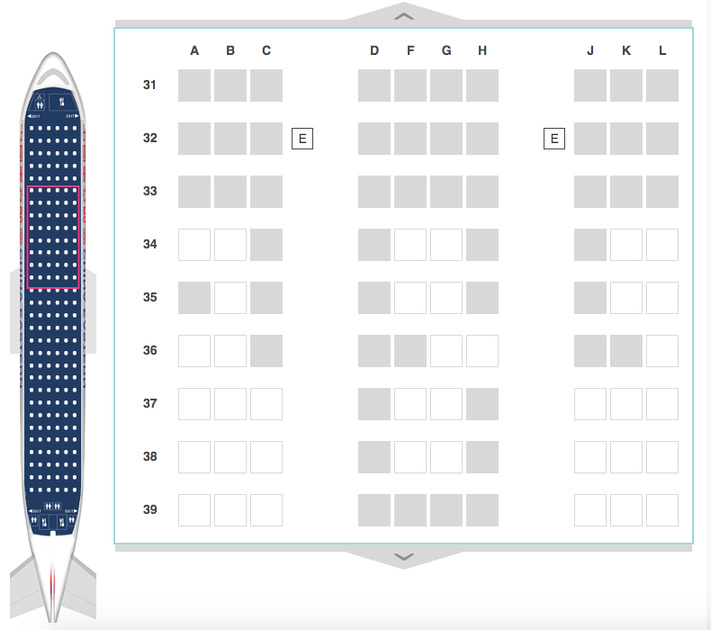 I appeared to be having problems checking in though, which I wasn’t sure it was because it was a booking via Qantas.

Nervous about not having my seat confirmed I got to the check-in early to make sure. My seat was reserved but I’m glad I got there early as the queue was long and there weren’t enough check-in staff. 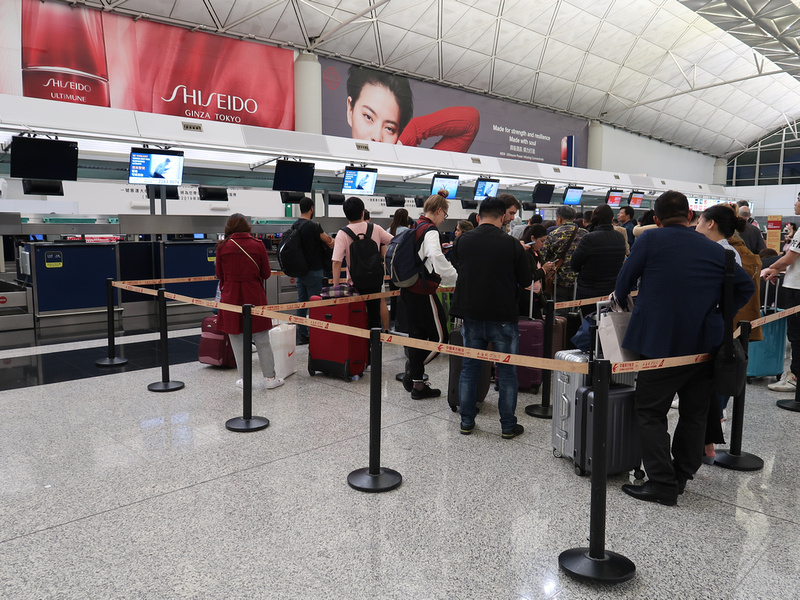 The first flight was the short haul section to China Eastern’s home base of Shanghai Pudong. The departure was from one of the lower gates, so that means a bus to the plane. 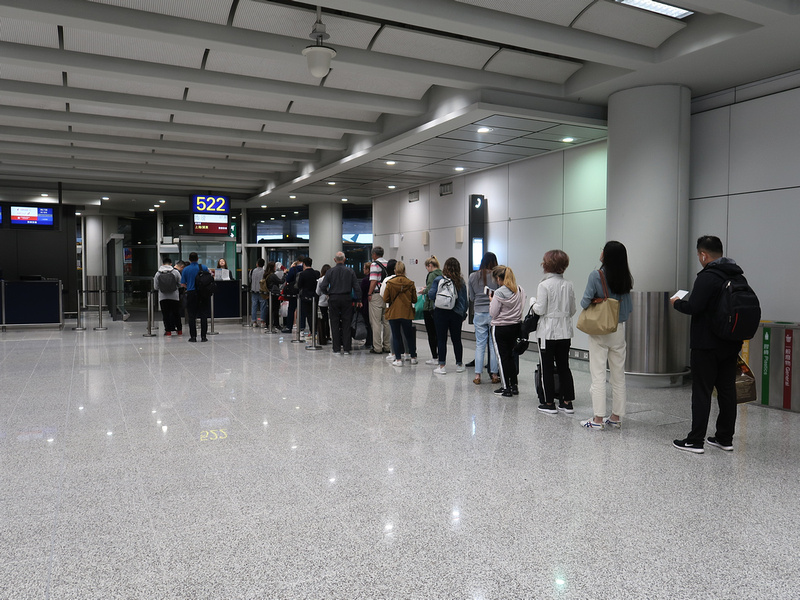 It started raining while we were waiting to board, so disposable rain ponchos were passed out. There has to be a better system of boarding a plane than resorting to doing this. 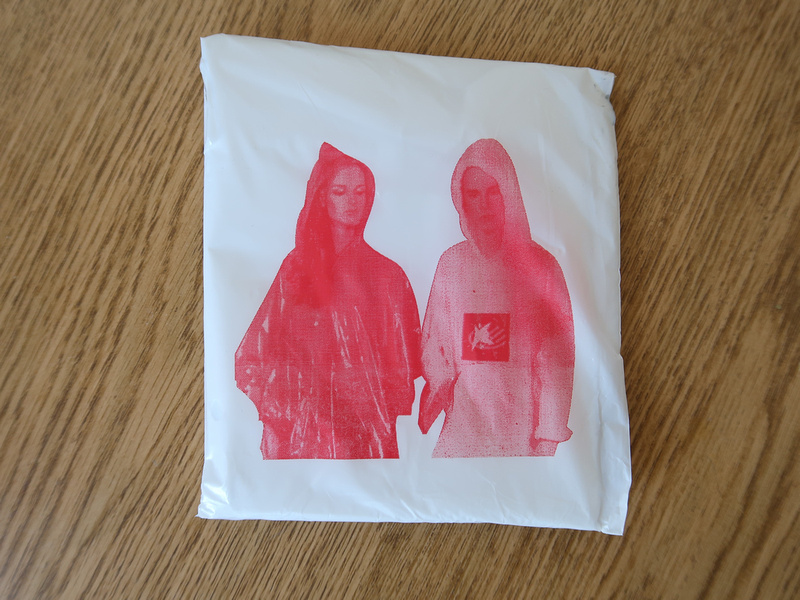 By the time we boarded the rain had stopped, so that poncho may come to good use when I am back in Vietnam in the rainy season. 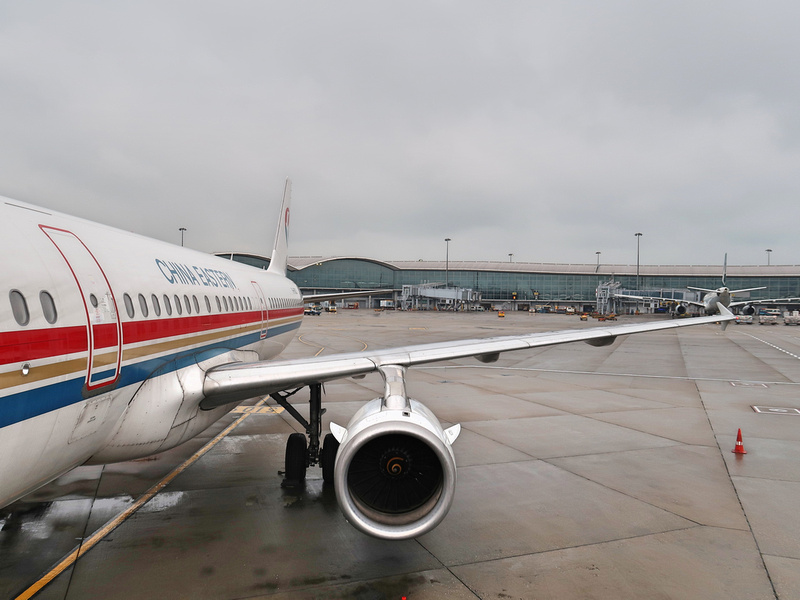 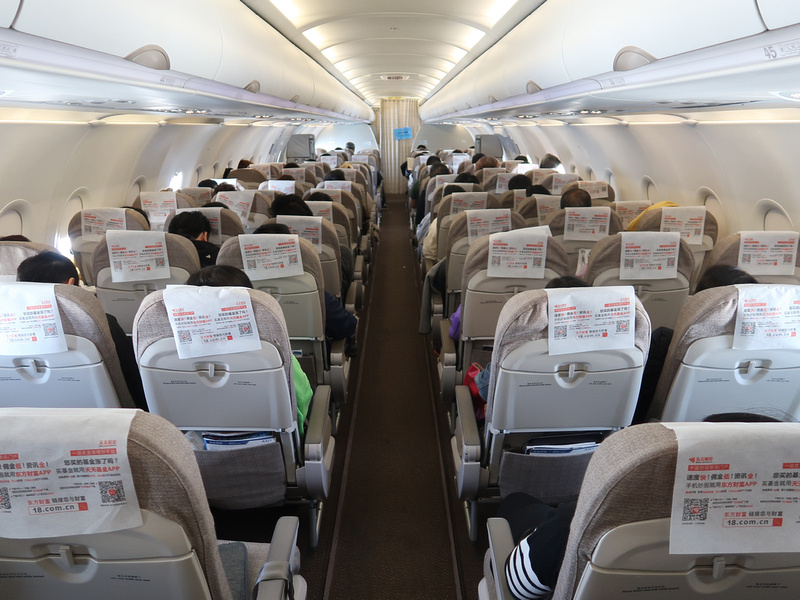 The flight is on an A321, and there is a good amount of leg room. 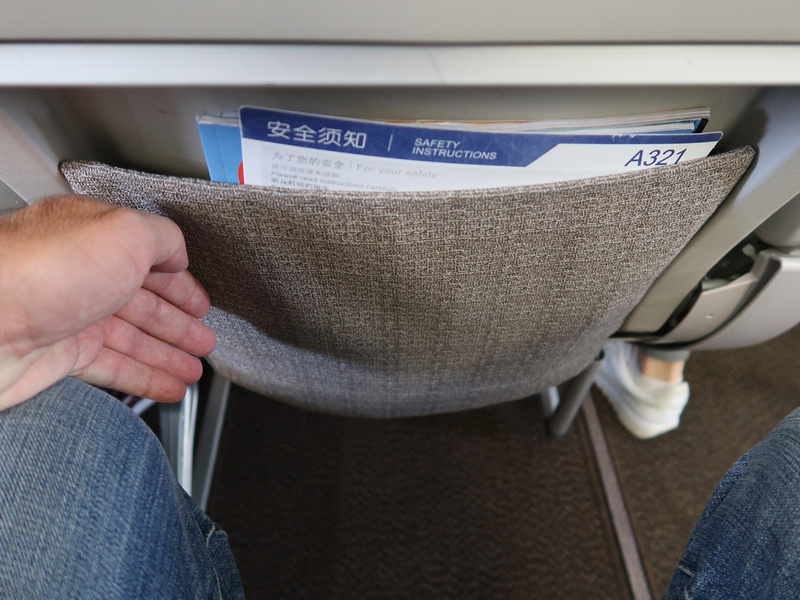 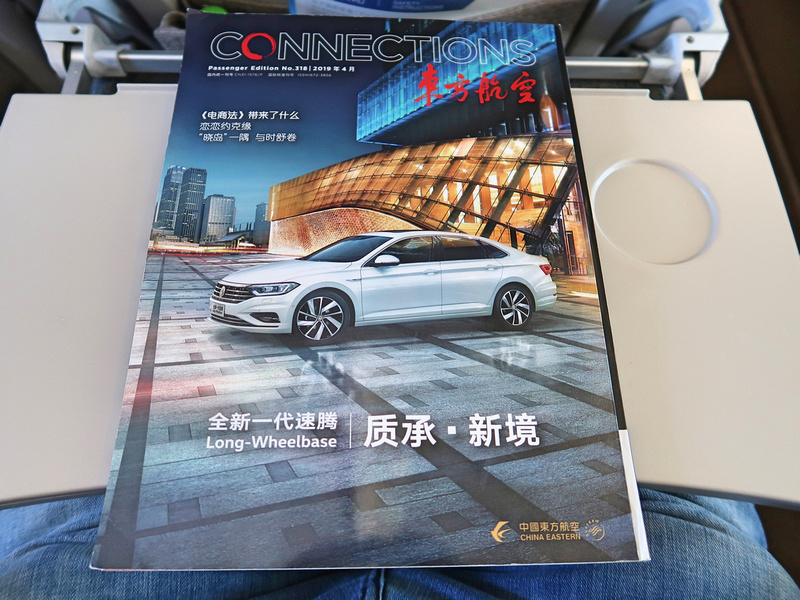 It’s mostly in Chinese, but I like to check the ads and other announcements. I didn’t know that China Eastern fly to Cairns. 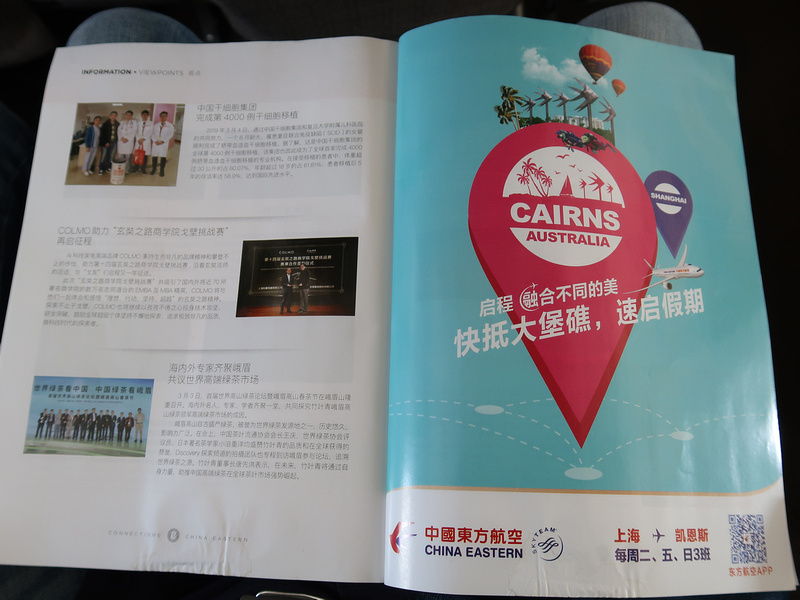 The route map of global and Chinese destinations. 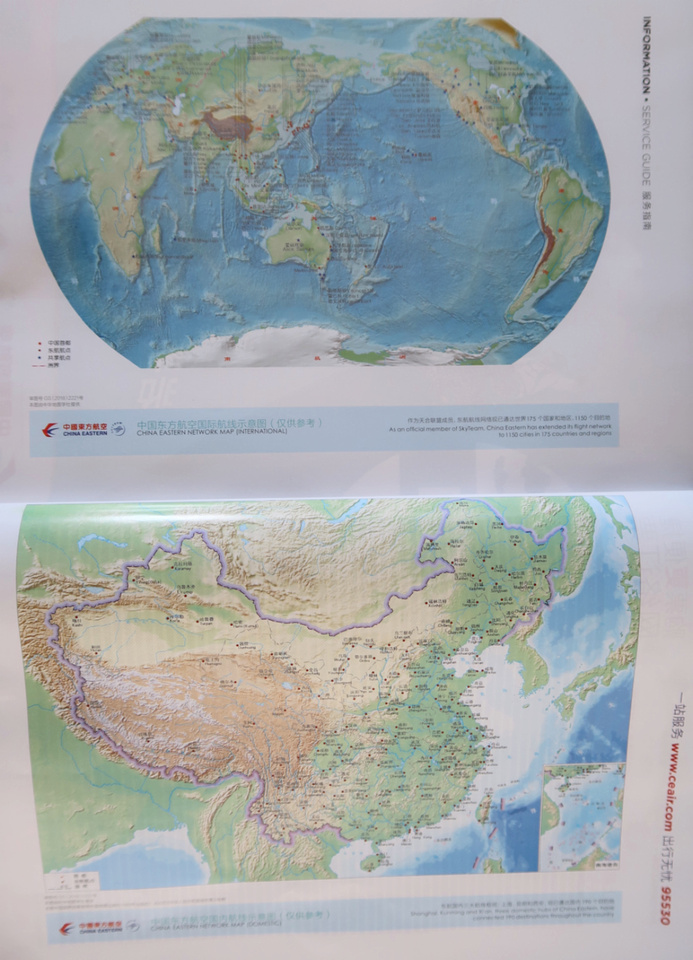 A cooked breakfast is served on this flight. I got the egg and potato meal. 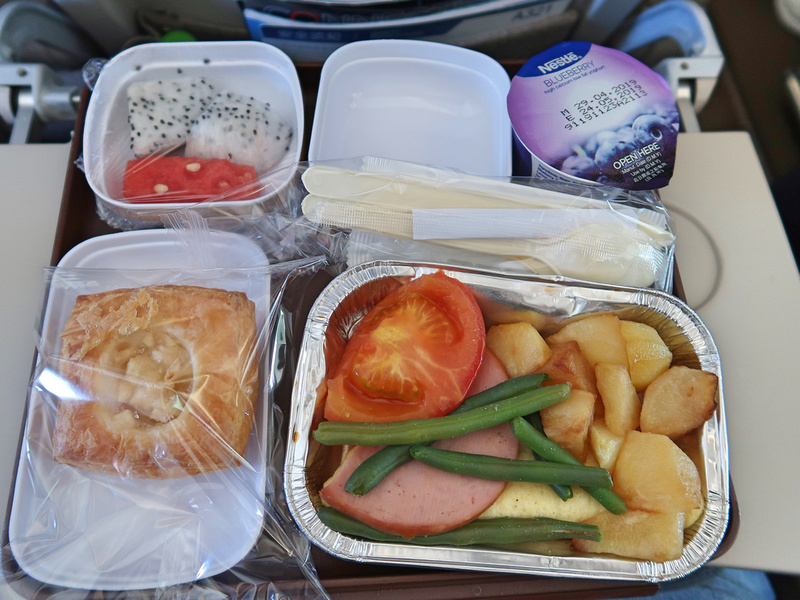 We arrived nearly on time at Pudong Airport, and once again there was no gate to deplane from. 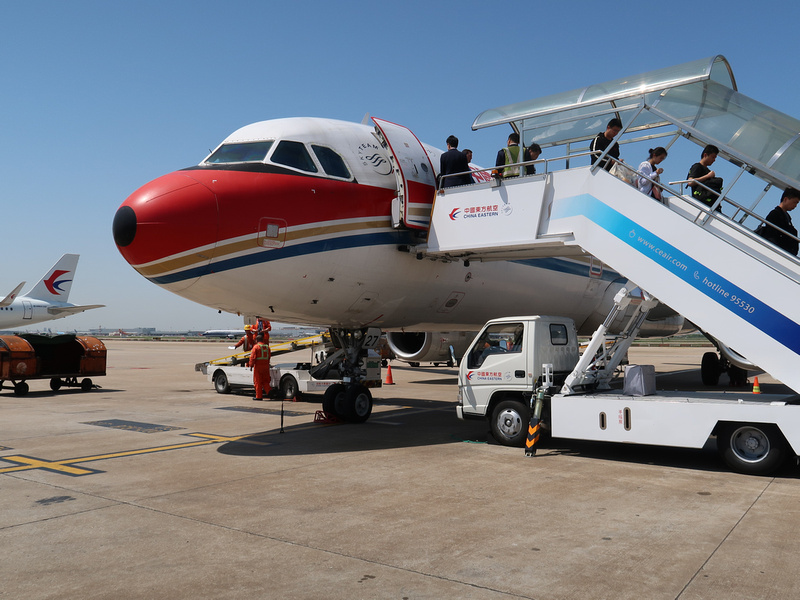 Hong Kong and Shanghai Pudong both rank in the 10 busiest airports in the world, so no wonder they are both running out of airbridges. It’s a massive terminal at Pudong, but it’s easy enough to navigate. I was last here in 2017 with a flight to Chiang Mai. 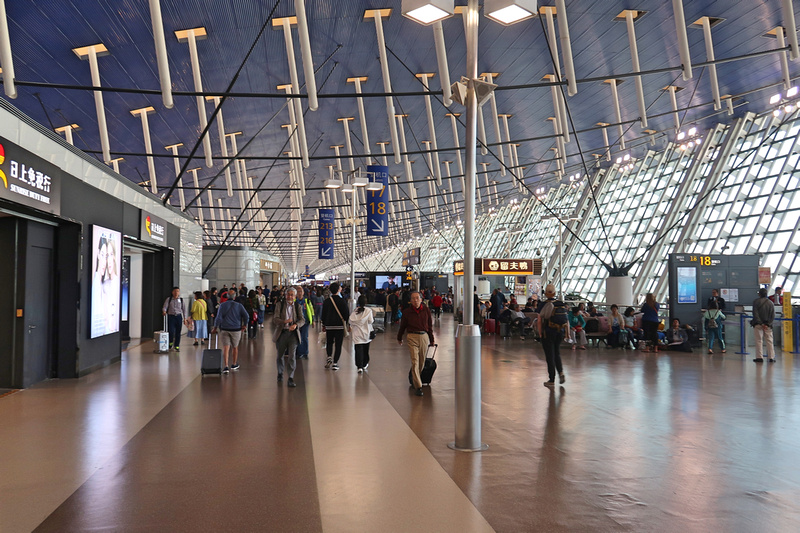 With a scheduled layover of 2H 10M I barely had enough time for a coffee before the next flight. With China’s draconian firewall blocking the internet I didn’t even bother getting online. 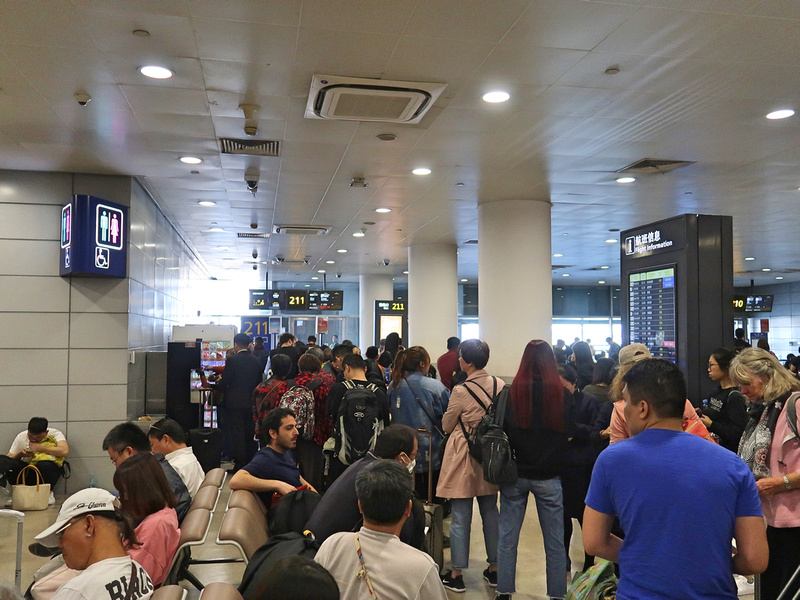 I was surprised to see that the flight to Toronto was also being boarded by bus. Understandable when it’s an A320/737, but boarding a 777 by bus is a slow and tedious process. 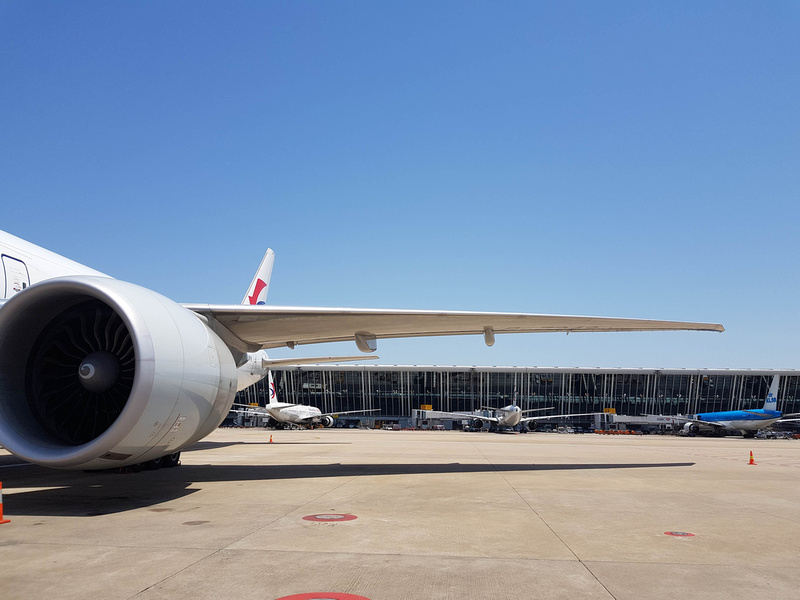 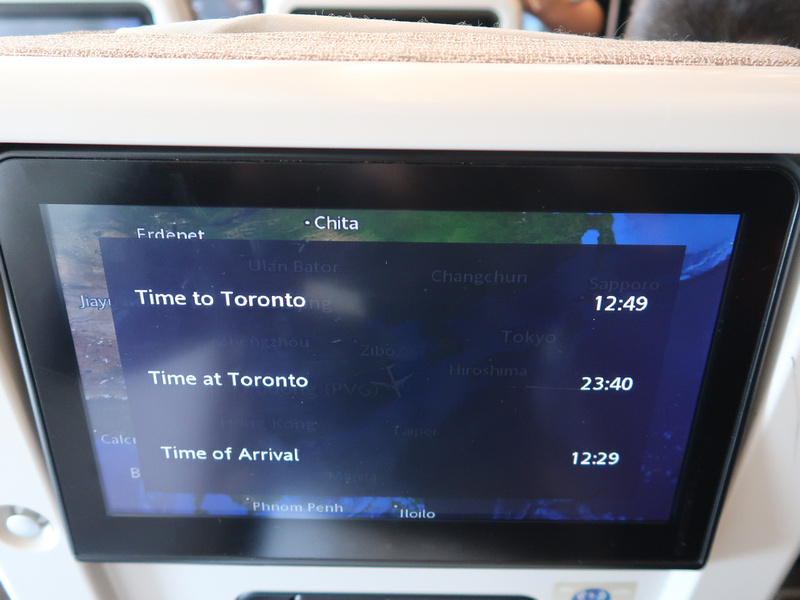 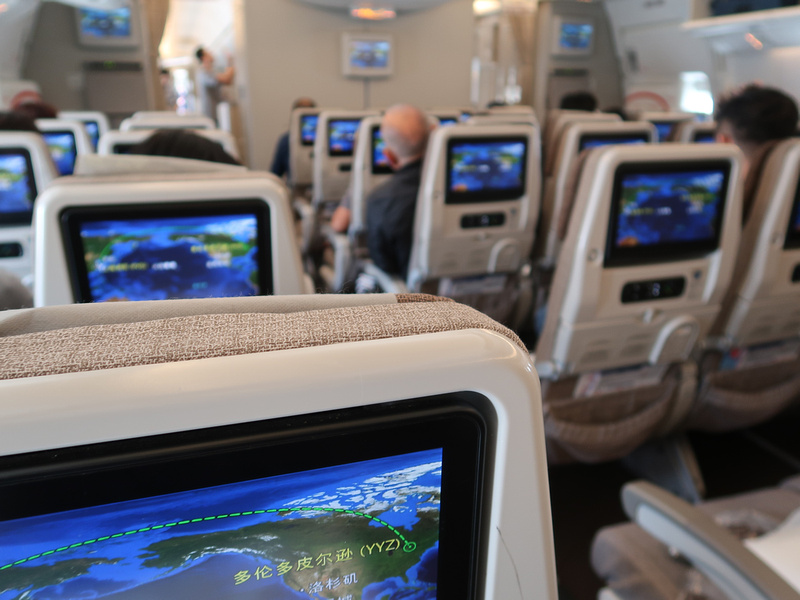 The TV screens on this flight were modern, and there was a good enough selection of movies to choose from. Not in the same league as Emirates or Singapore Airlines, but certainly enough to choose from to keep me occupied. 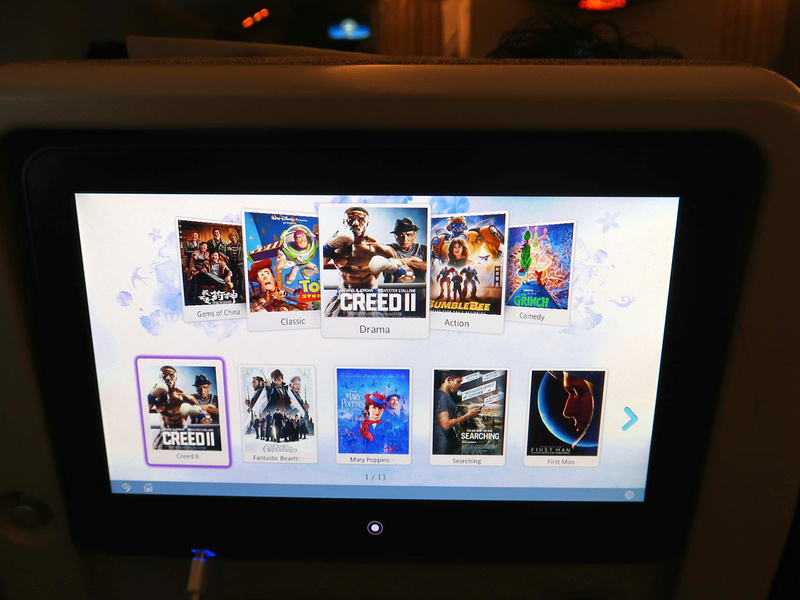 There is also wifi available onboard, but I didn’t check it. I like the opportunity that flying affords of going offline. 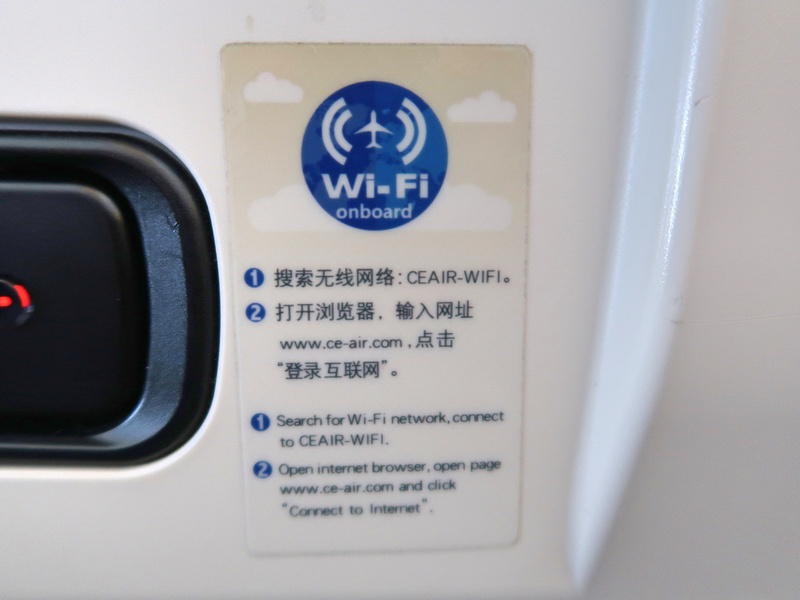 As with the first flight there is a good amount of leg room here, and they have useful backseat pockets. In addition to the section where magazines go, there is a pouch where you can place bulkier items. And the seat itself was very comfortable. 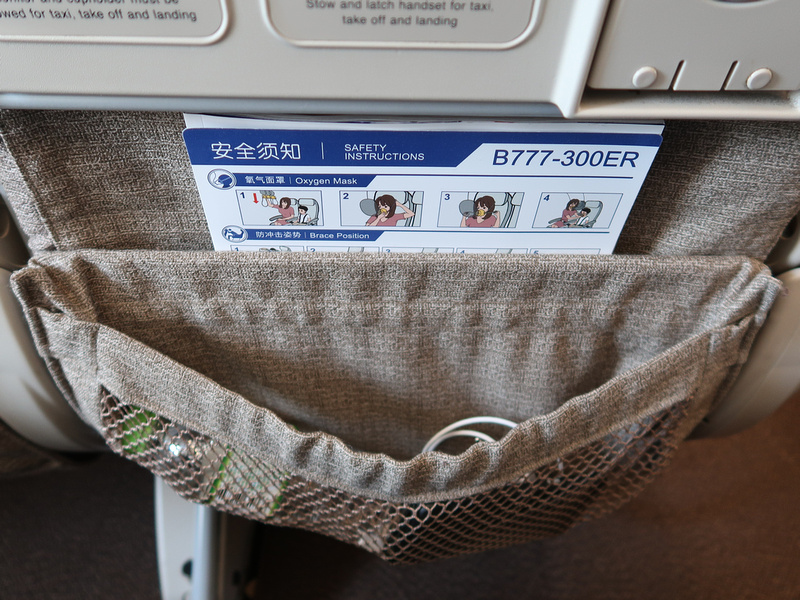 Soon after takeoff the first meal of the flight is served. I got the beef and rice option. 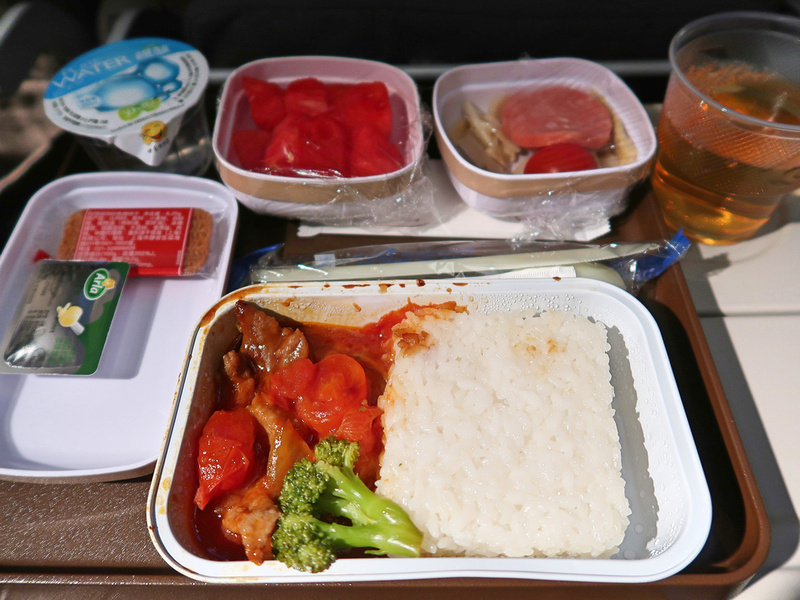 In addition to the movies you can check the progress of the flight on the flight tracker. 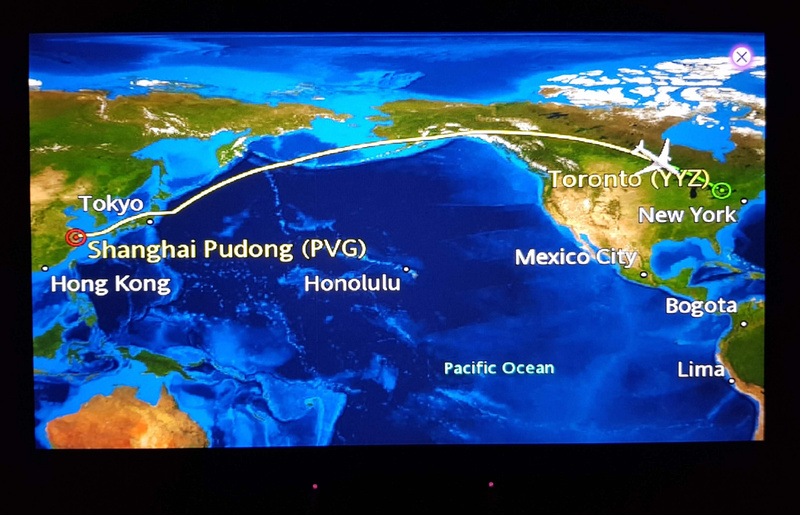 A dinner is also served on the flight, and I got the noodles. 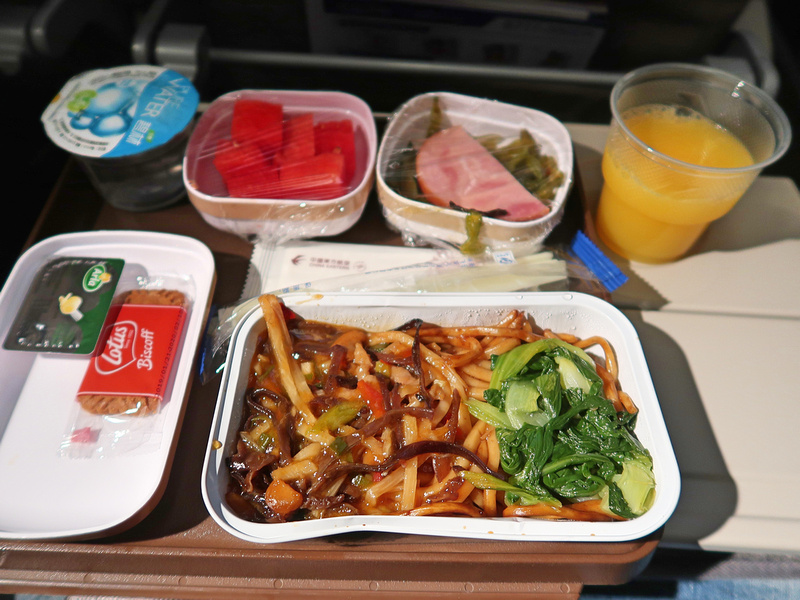 Somewhere over Canada I’m reminded what a big country this is. 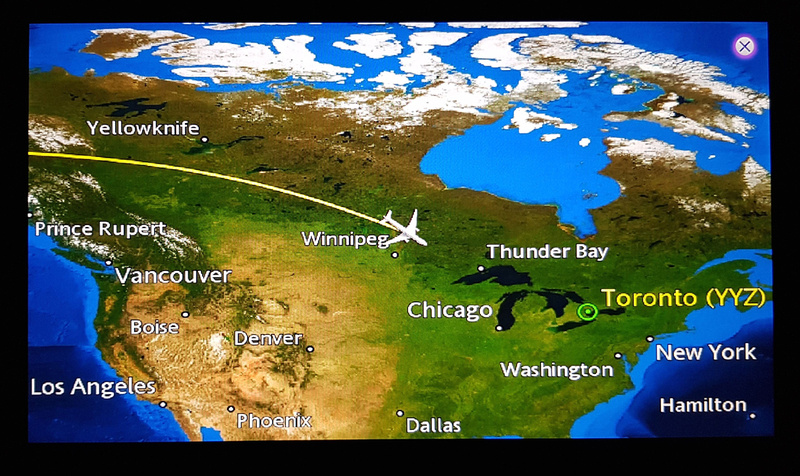 The flight isn’t long enough for three full meals, so before landing a light breakfast is served. If you didn’t place a special meal order you had no choice but to get this tuna roll. 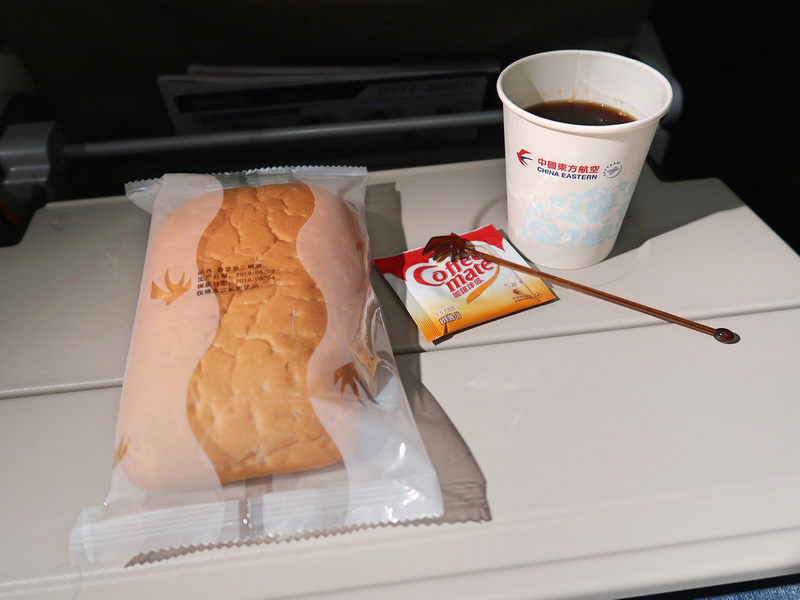 The flight arrived in Toronto on time, and immigration at Toronto was an easy process. 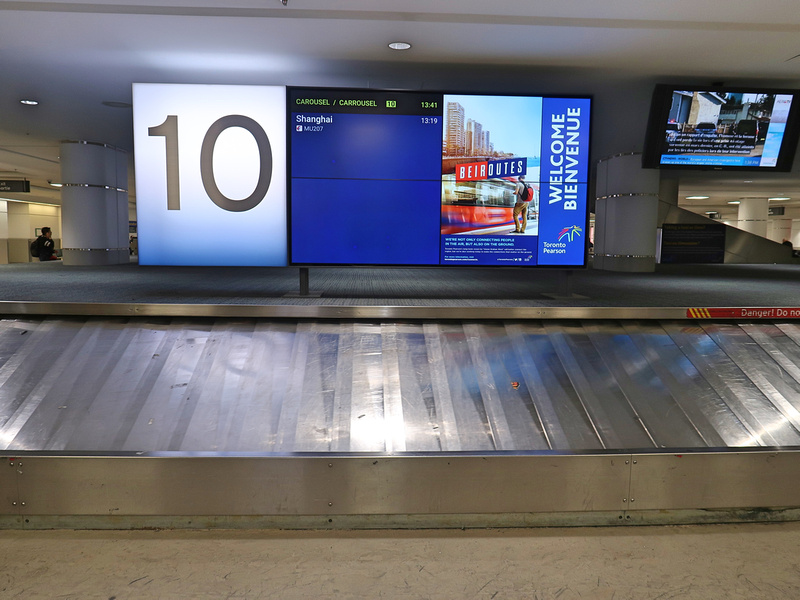 Overall this was a good flight option to get from Asia to North America. I prefer to book by alliance airline for long-haul flights, but if a cheap enough China Eastern flight showed up in the flight search results I wouldn’t hesitate to take it.