Being based in Playa del Carmen has been ideal for visiting the highlights of the Yucatan Peninsula. One sight that has been high on my visit list is Chichen Itza. Not counting Luxor Las Vegas or the Louvre Pyramid, this was the first time I have seen a pyramid.

The Chichen Itza archaeological site contains numerous ruins built by the Maya civilization around 1000 years ago. The central building of the site is the remarkable Kukulcán Pyramid, or El Castillo (The Castle).

[My first pyramid – the Kukulcán Pyramid at Chichen Itza]

Chichen Itza is a UNESCO World Heritage Site, and in 2007 it was voted as one of the New 7 Wonders of the World. 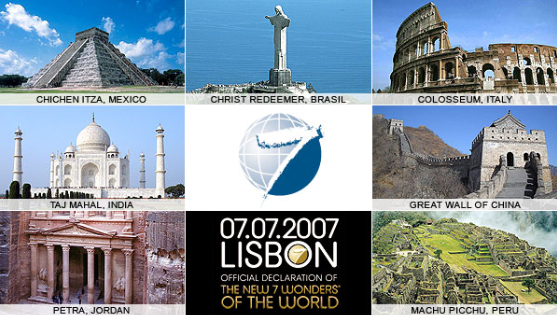 [New 7 Wonders of the World]

After visiting Chihen Itza a reader asked me what my favourite temple in the world is, and without hesitation I said Borobudur in Java. This got me thinking, why is Chichen Itza a wonder over Borobudur? Nothing against Chichen Itza, as it really is wonderful and worth the visit, but Borobudur is a far superior monument. Borobudur is the biggest Buddhist temple in the world, yet it remains relatively unknowm. The temple features intricate carvings on most of its exterior and it is crowned with 72 stupas containing a Buddha image. And unlike Chichen Itza, you can walk on Borobudur. [Borobudur – The biggest Buddhist temple in the world]

I had a look at the list of New 7 Wonders finalists and I was gobsmacked to see that Borobudur wasn’t even on the short list. The New 7 Wonders was selected by a global poll, which gave it about as much credibility as the Eurovision voting system. Indonesia is terrible at promoting its own wonders outside of Bali, and it seems that the 230 Million Indonesians weren’t as organized to vote as the 110 million Mexicans. I remember when this poll came out in 2007. I can’t remember if I voted, but if I did I probably voted for the Sydney Opera House out of patriotic duty.

So, do you agree that Chichen Itza – or any of the other winners – should be on the list?