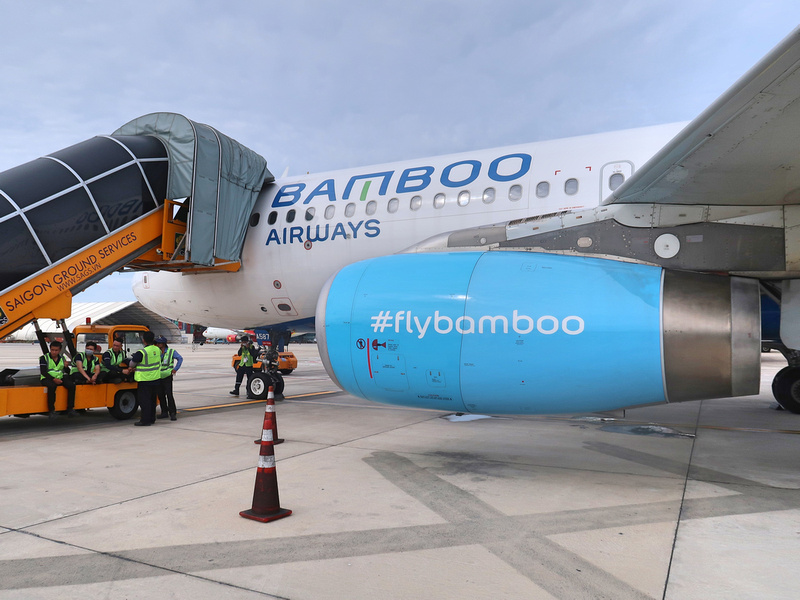 I flew with Bamboo Airways from Ho Chi Minh City to Van Don (the gateway airport for Ha Long Bay). I searched for flights via Skyscanner, and on the day I wanted to travel Bamboo Airways was the only option (Vietnam Airlines and VietJet Aie fly on other days).

Despite there being no competition on that day, the airfare on offer was still a good deal at $27.63 USD. 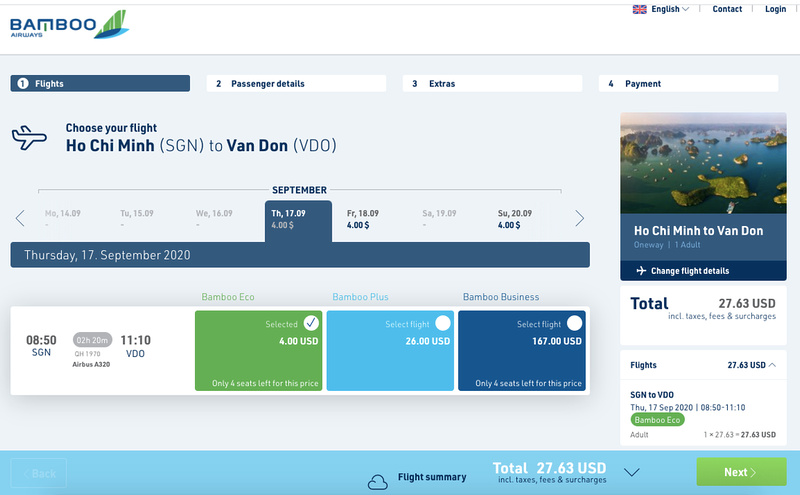 There are of course add-ons to be added, but I didn’t add any. 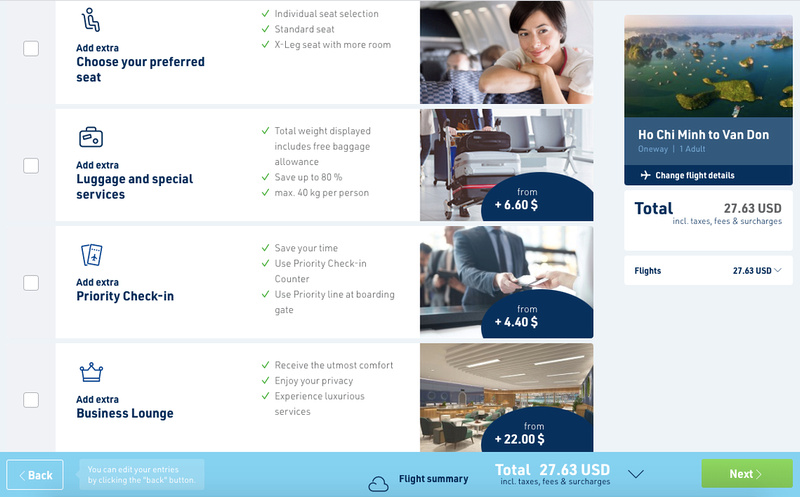 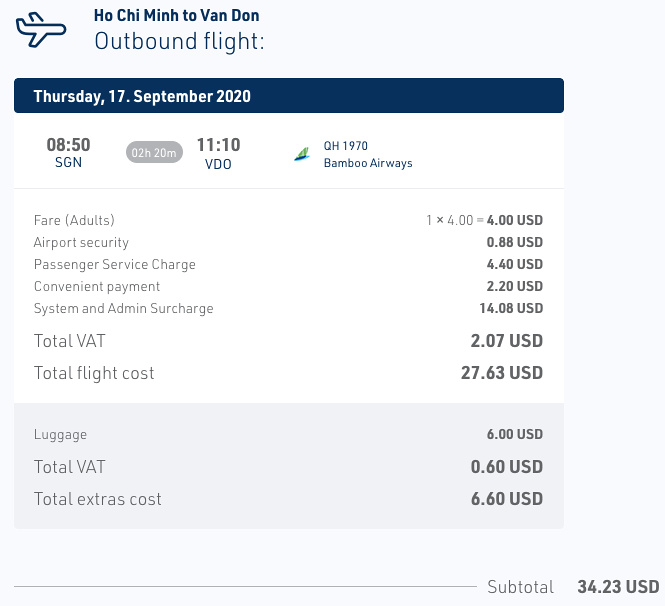 I checked in at the airport. There was no queue and I was able to request an aisle seat. 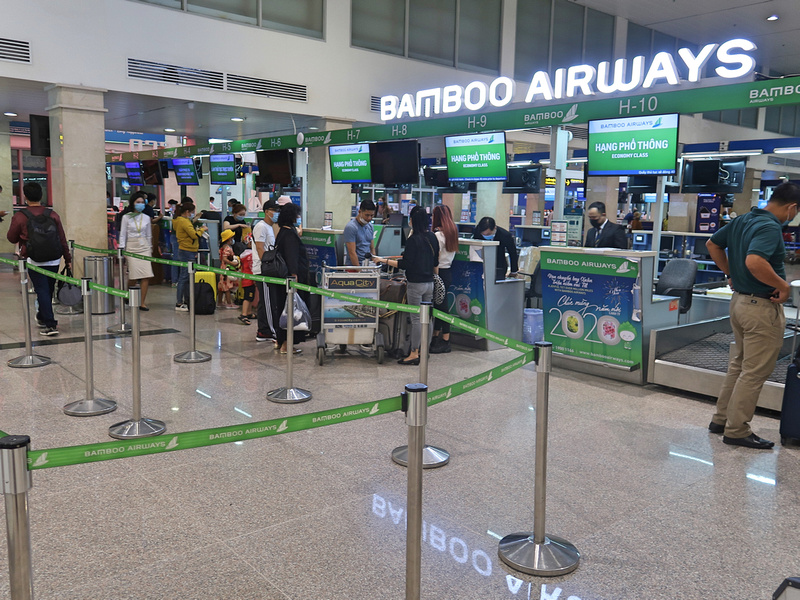 I’m not familiar with the northern provinces of Vietnam so I didn’t know that I was flying to Quang Ninh province. Even though that’s not the name of the airport, perhaps it is more familiar to Vietnamese passengers than Van Don. Either way, just remember your flight number when looking for your flight. 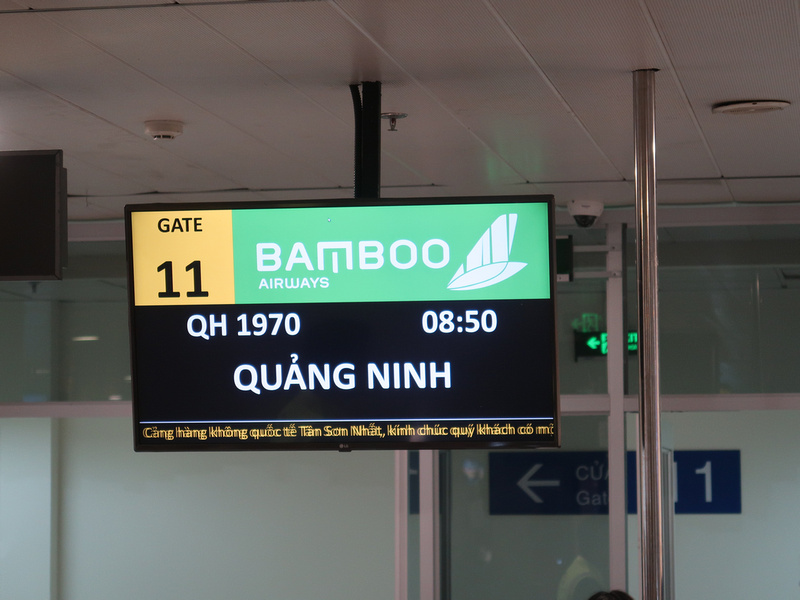 Even though there are no international flights during the pandemic, domestic travel is doing well. With Tan Son Nhat airport short on space, not every flight gets an airbridge. SGN is going to expand soon, and a new airport for Ho Chi Minh City is also planned. 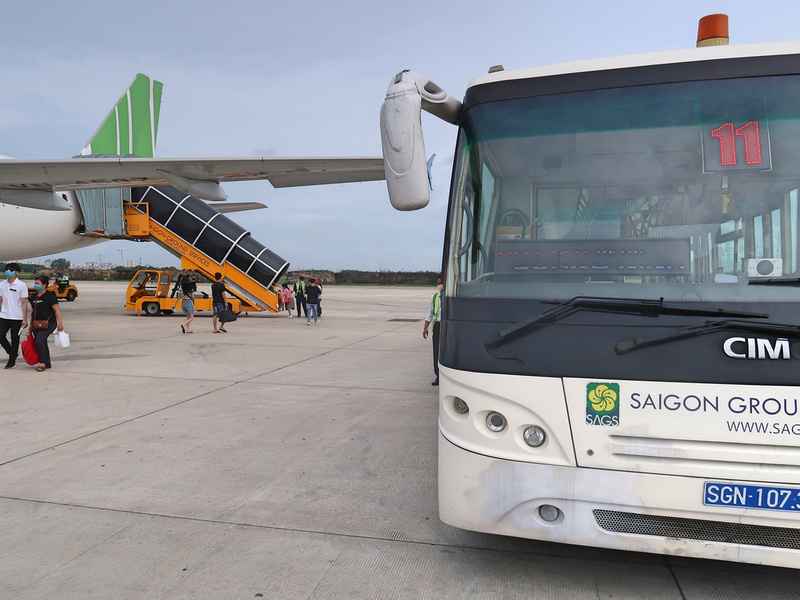 Remember to hashtag flybamboo when taking a selfie in front of the plane.

Bamboo Airways is a hybrid airline, combining features of a low-cost airline and full-service airline. I’ve flown with them a few times now, and I have found that legroom has varied. Today’s flight had the leg room you would expect from a low-cost airline. 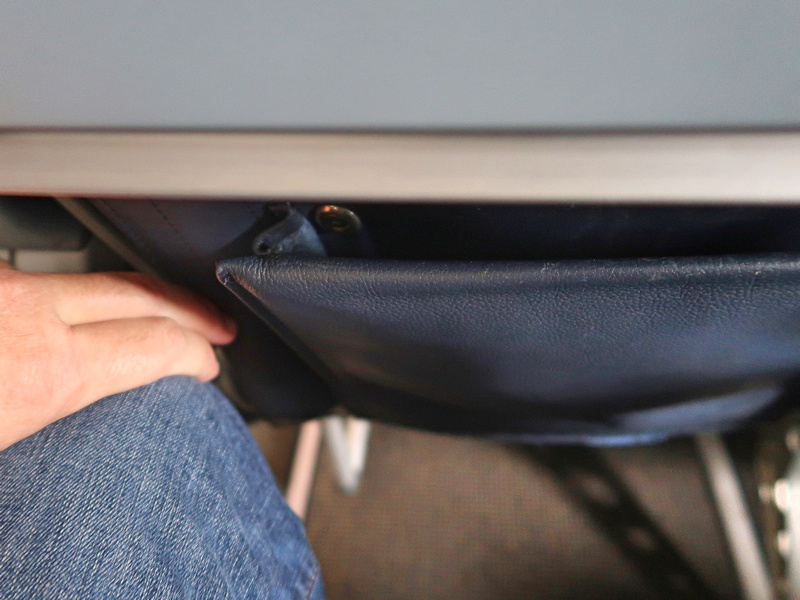 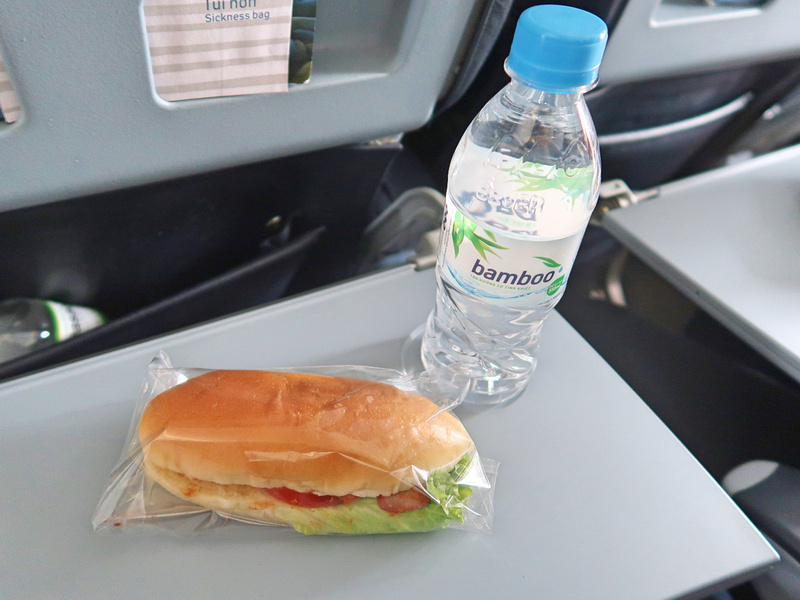 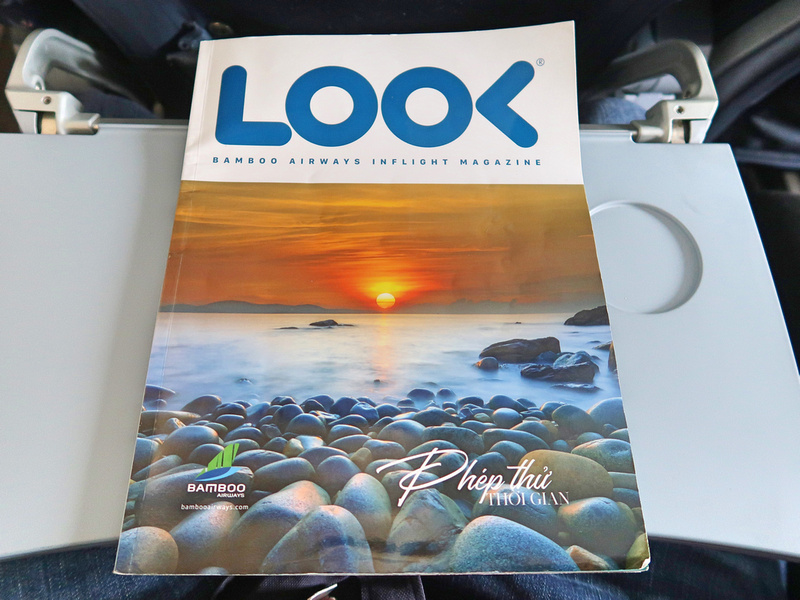 I usually read the magazines for the ads, believe it or not. I find new property developments there, and also new flight routes. Interesting to see that Bamboo is going to start services to Con Dao Island from three destinations. I haven’t been there yet, and it feels like I should go before it becomes the next big thing. 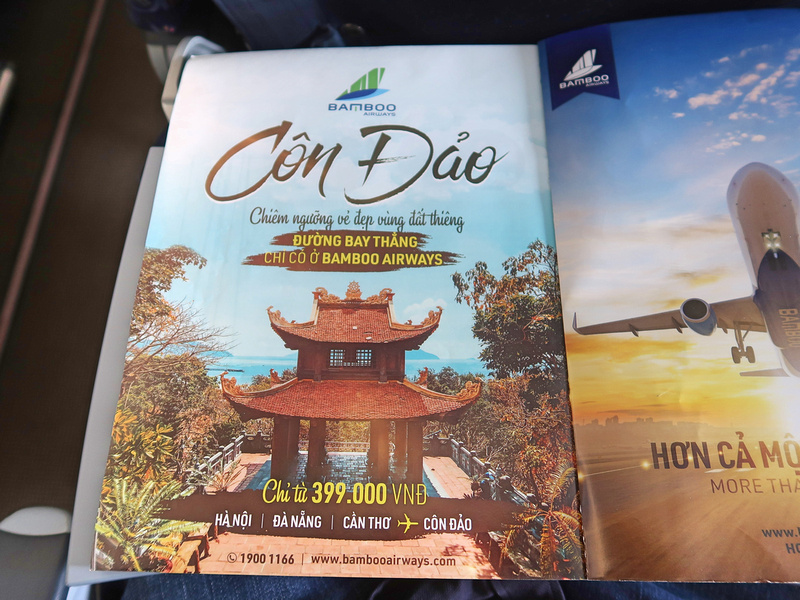 We arrived at Van Don on time, and it was nice to see the mountains in the background. It reminded me a bit of arriving in Luang Prabang. The flight flies over Ha Long Bay, and while I saw some glimpses from my aisle seat, I regretted not getting a window seat for this flight. 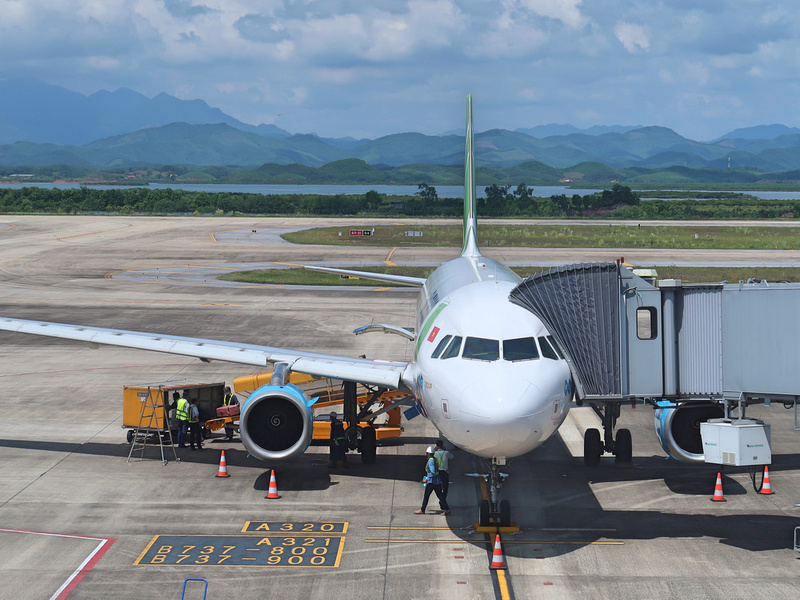 Van Don International Airport opened in December 2018 and it was the first privately-built airport in Vietnam. Van Don was built as an international airport with the intention of bypassing Hanoi for those wishing to go to Ha Long. 2019 was a boom year for aviation in Vietnam, and things were looking up before the pandemic hit. Bamboo Airways began operations in 2019 and were planning to expand their Van Don operations.

Bamboo had palnned flights to Chinese provinces Guangzhou, Sichuan, Chongqing, and Hangzhou, as well as flights to South Korea, Singapore, and Thailand. Hopefully, they can continue growing when international travel resumes. 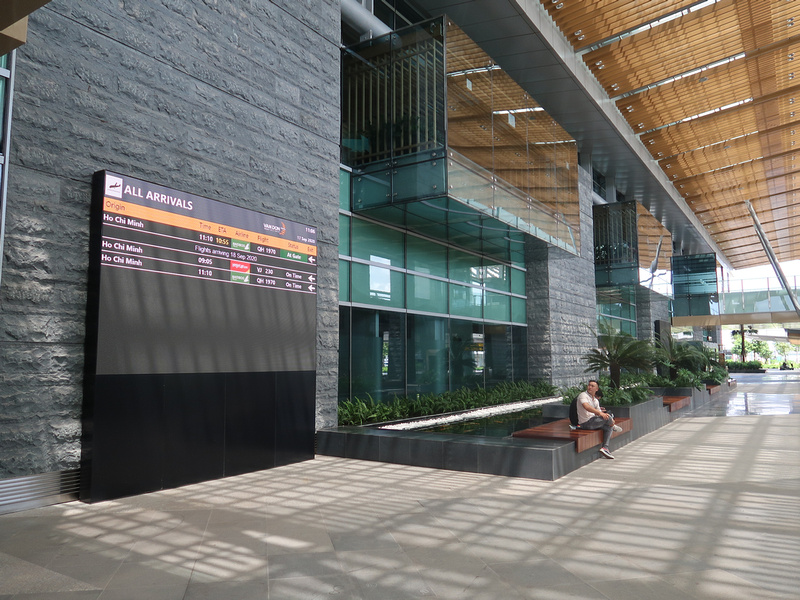 The airport was built by Sun Group, which is one of the largest real estate developers in Vietnam. 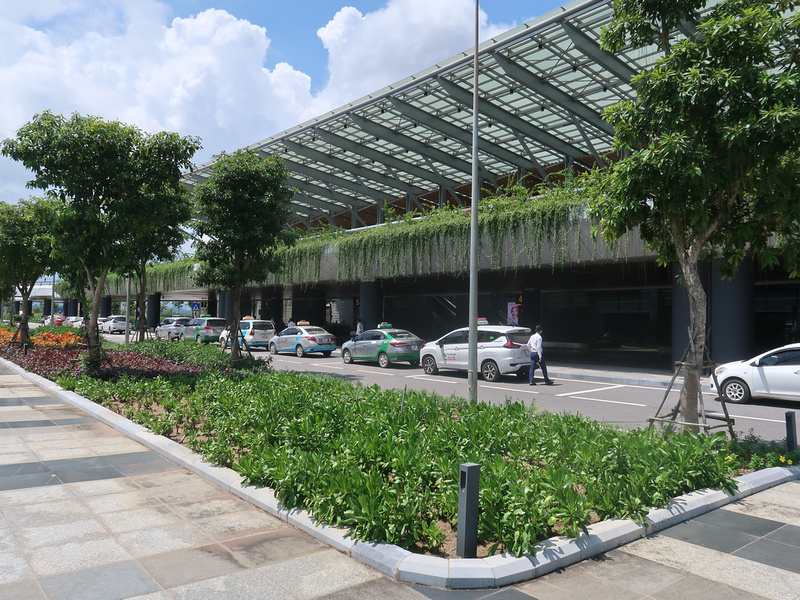 Van Don Airport is 50 km away from Ha Long City, so it’s not exactly convenient. Fortunately, there is a free bus service at the airport to Ha Long City, and the road to Ha Long is a new highway all the way, so it’s a comfortable trip. 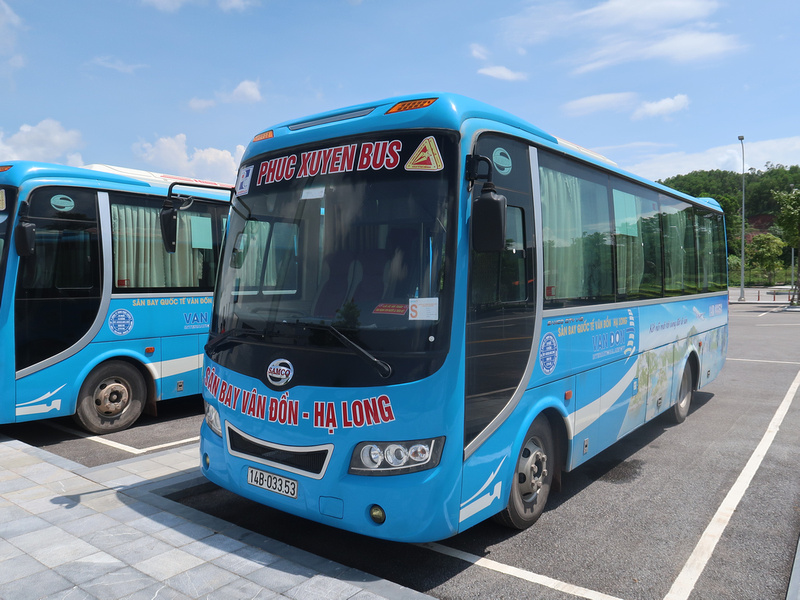 Overall this was a good flight option if you are looking to visit Ha Long Bay from Ho Chi Minh City, saving you extra travel time via Hanoi. I visited Ha Long City, which is the main city that serves Ha Long Bay.