Bamboo Airways is a Vietnamese airline that began operations in January, 2019. I had been waiting for an opportunity to review them, so when I had a trip planned from Hanoi to Ho Chi Minh City I booked a flight.

I compared flights first via Skyscanner to make sure I wasn’t going to be paying over the odds, and the flight prices were competitive with the other airlines flying this route. The cheapest flight in my set time frame was VietJet, but that price doesn’t include a bag.

The Hanoi-Ho Chi Minh City route is in the top ten busiest international routes, and Bamboo already have five flights a day between the two cities. By the look of the flight times they are targeting business travellers as there are no flight options during the day. 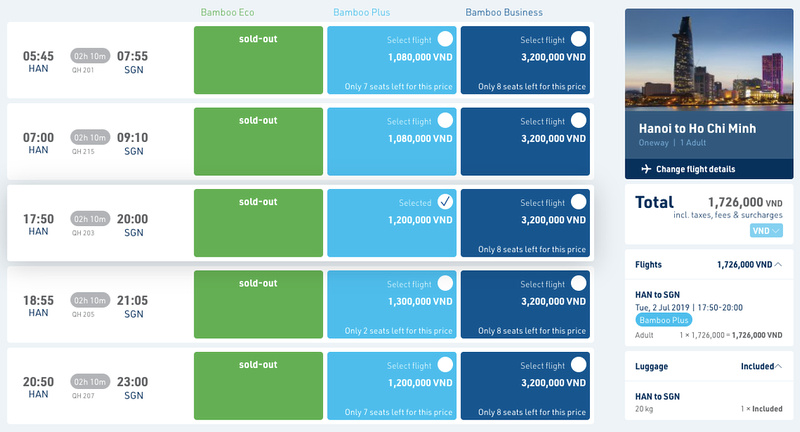 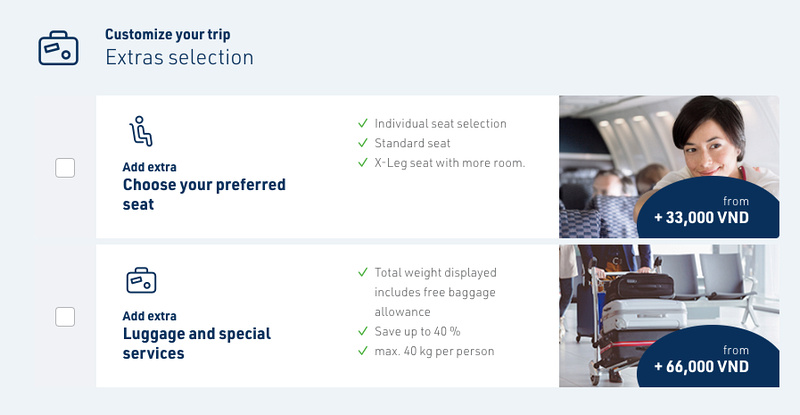 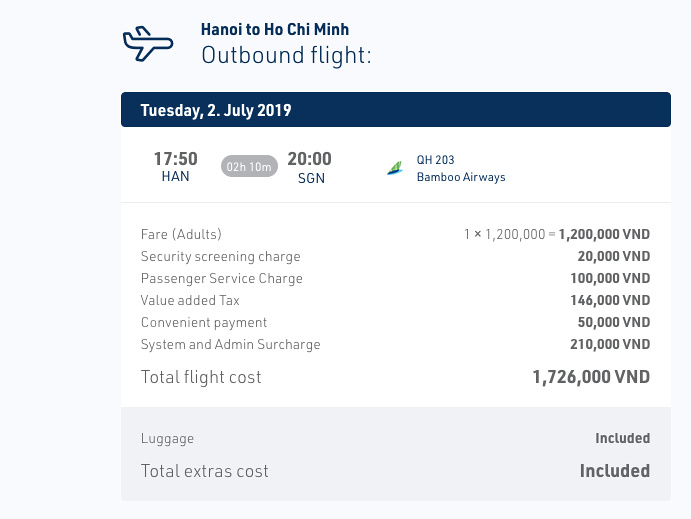 I arrived by taxi at Noi Bai International Airport and Bamboo Airways have already staked their fair share of branding at the departures entrance. 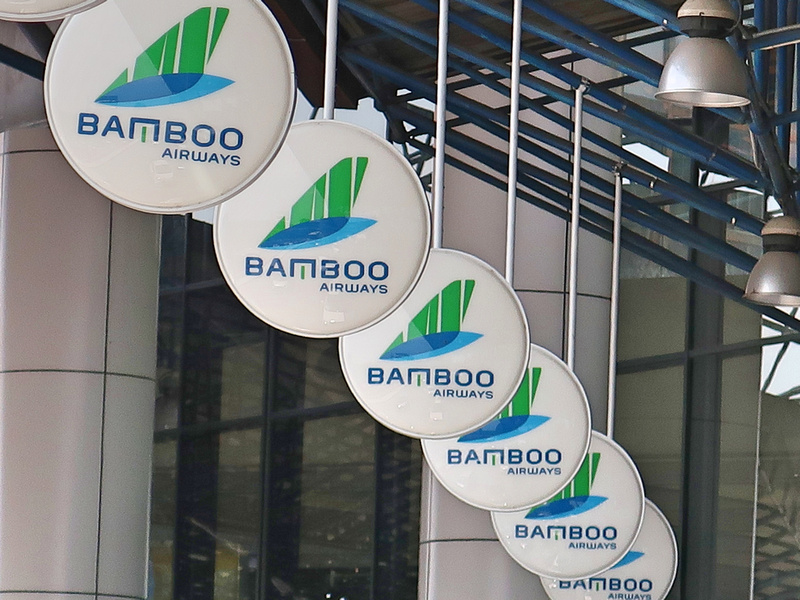 Online check-in is available for flights departing from Noi Bai (HAN), Da Nang (DAD), Tan Son Nhat (SGN) airports. When I tried to check in I was getting an error message. 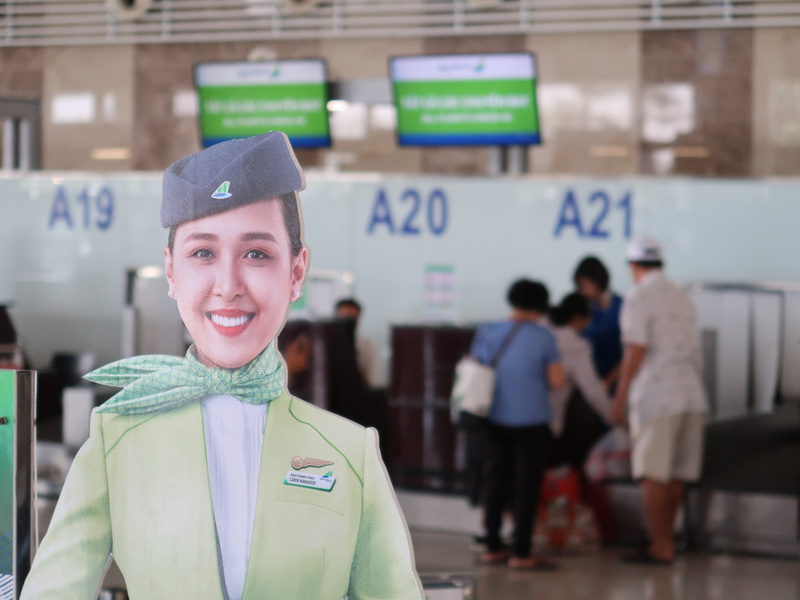 I went to the airport early to make sure my ticket was ok. There is an open check-in for all flights, and there was no queue. There were three Bamboo Airways flights showing on the departure board, so they have already muscled their way into the domestic market. 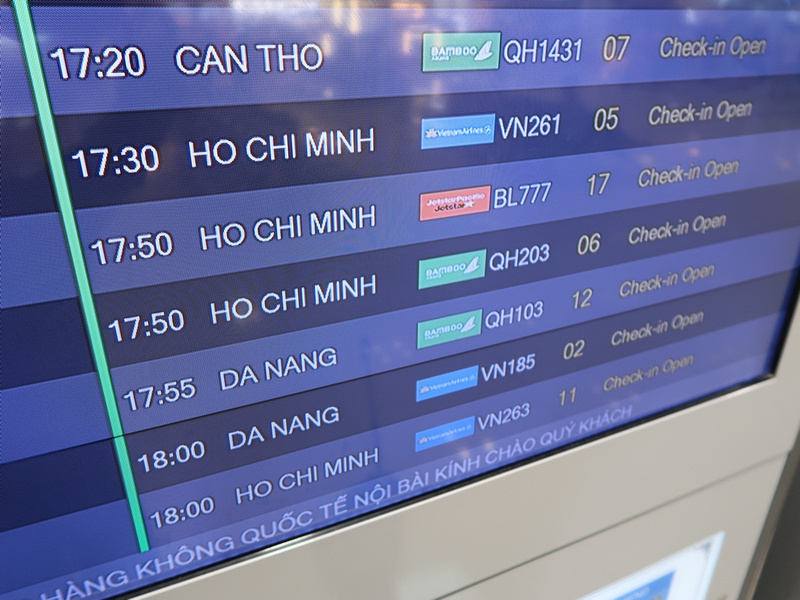 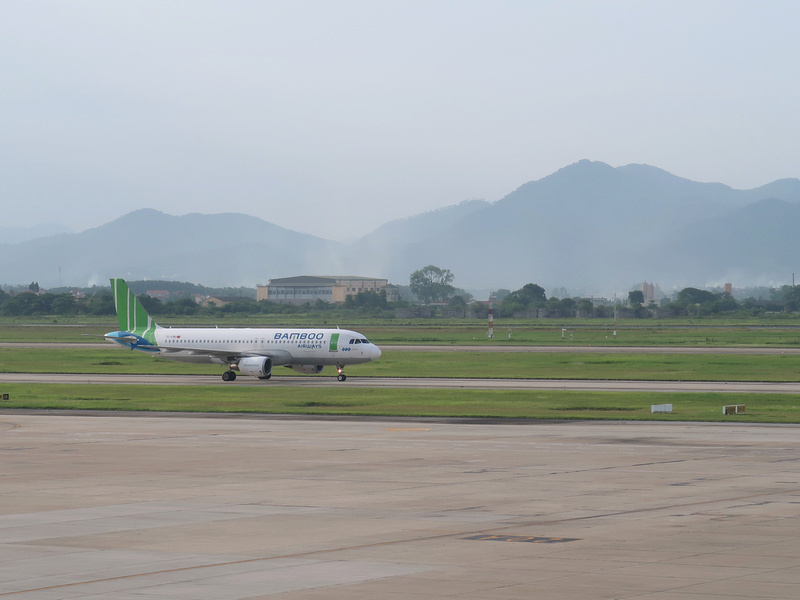 The flight arrived on time and the door closed 5 minutes after the scheduled flight time. We were then stuck on the tarmac due to airport congestion and departed 50 minutes behind schedule. 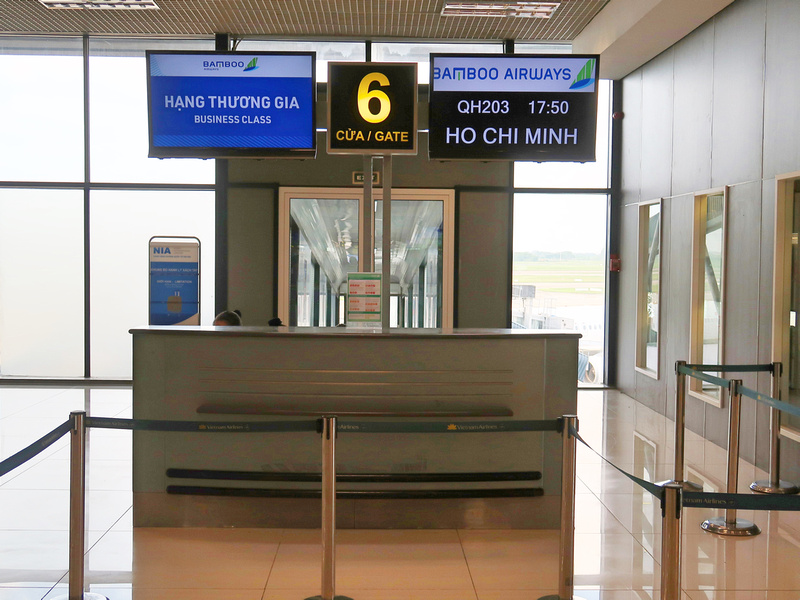 When the aircraft arrived I noticed that it’s registered in Turkey. The aircraft is being leased from Freebird Airlines, though it has been given the full Bamboo paint job. While Bamboo Airways has placed an order for 50 Airbus A321neo planes, it’s not like you can just go down to your nearest Airbus dealership and fly them out.

In addition to the aircraft being borrowed from overseas, most of the crew were foreign as well. There were two foreign pilots, which is not unusual. What was unusual was to see four westerners in the crew, alongside two Vietnamese crew. In all my time of travelling in Southeast Asia, I’ve never seen Europeans working on a domestic flight in Asia. This made me think about all the resources it takes to start an airline, from hardware to human resources. To cater for growing demand, Bamboo are setting up an academy in Quy Nhom that will train pilots, attendants, technicians, ground staff, and flight dispatchers. 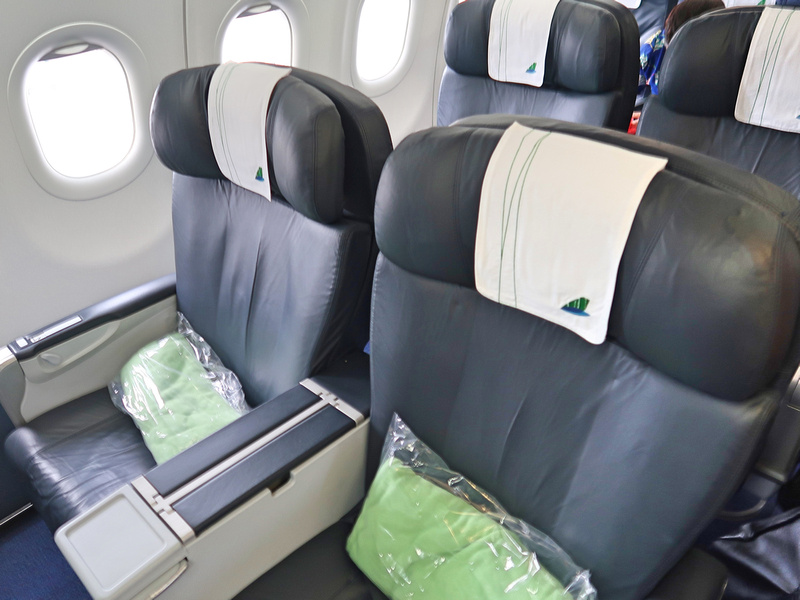 I was in economy for this flight. When I booked this flight for review purposes I picked the HAN-SGN route as I have also flown with Vietnam Airlines and VietJet Air on this route. I figured if they can’t fill a Hanoi-Saigon flight then they might struggle to be in business. The flight was full, so it might have been more instructive to fly a less popular route to see how they are doing. Originally I had every intention of getting a regular economy seat so I could compare the legroom difference between the other airlines in Vietnam. As I checked in early I was offered an exit row seat. My brain is not wired to say no to an exit row, so I will have to save that review for another flight. I did look at the economy seats though and it looked like to be not much more room than low-cost airlines (ie not much space). 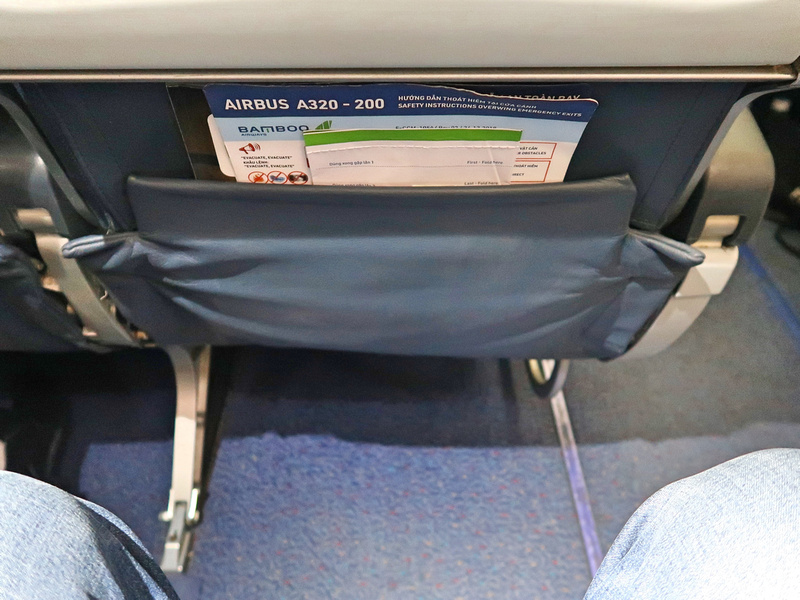 The inflight magazine for Bamboo Airways is named Look. It’s in Vietnamese with some articles in English. I usually flick through the magazine for the route map, but in this case there wasn’t one. Maybe the routes are changing so fast so they haven’t included it yet. 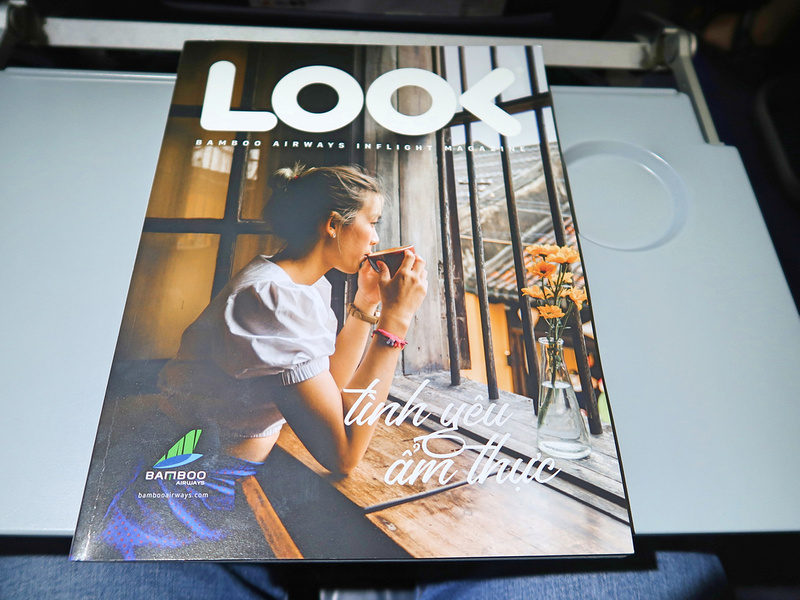 I was curious to see where they fly now, so I checked the online route map. So far they have established a solid domestic network, and this is the route map as of July 2019. 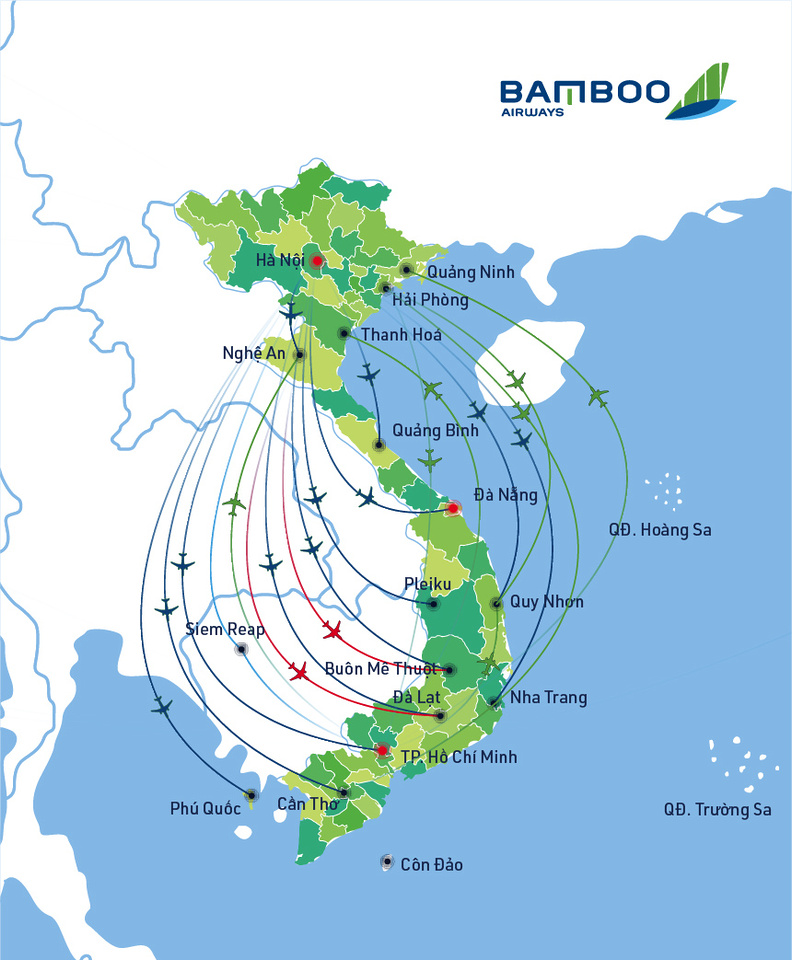 One thing you will find in the inflight magazine is advertising related to FLC Resorts. Bamboo Airways has their operating base at Phu Cat Airport in Quy Nhon. FLC has resorts here, and it’s likely that future international flights will include destinations in East Asia to serve their resorts. Quy Nhon is a city by the sea that has great beaches nearby, and it’s probably the next big thing in Vietnam after Danang and Nha Trang. 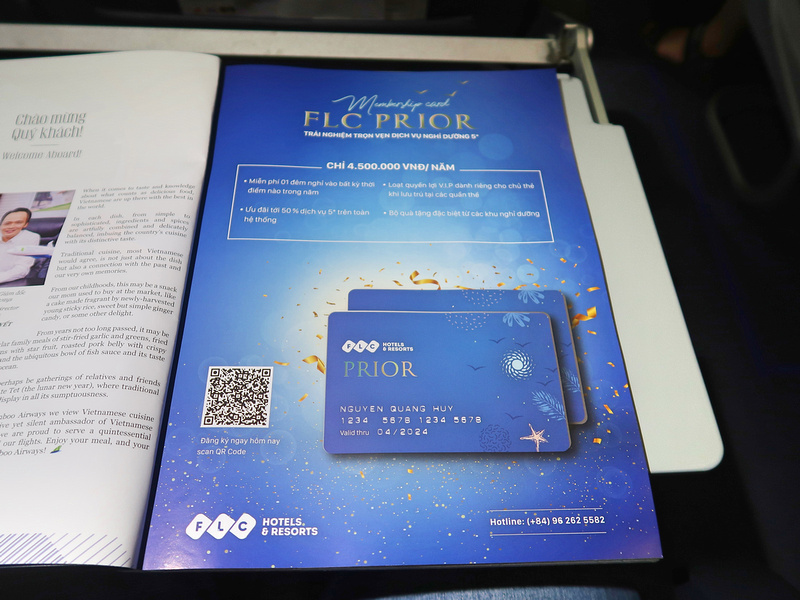 The advertising isn’t a total walled garden though, as there are advertisements for other hotels and resorts. 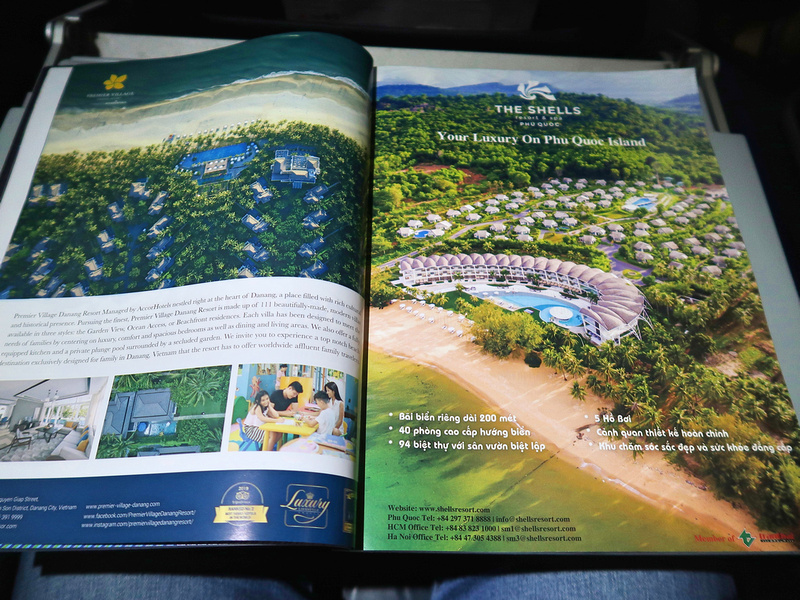 There is a loyalty program available for Bamboo Airways. According to the T&C’s you need to be a Vietnamese citizen or a foreigner with a Vietnamese address. 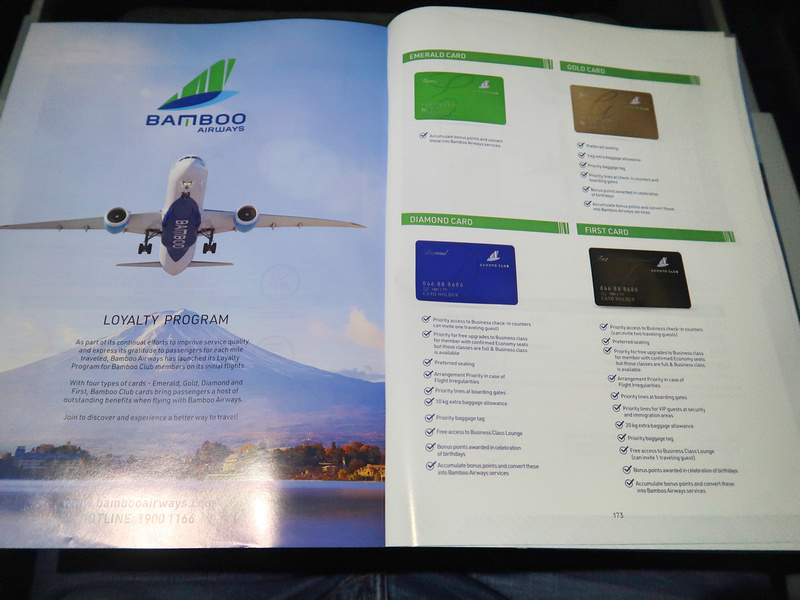 There was a free meal service on the flight, which is one of the services that sets it apart from low-cost airlines. They only had one meal available by the time they got to me – prawn noodles. Seafood in the air is not my first choice, but it was actually ok. I will eat anything put in front of me, so this is not the site to come to for food reviews. 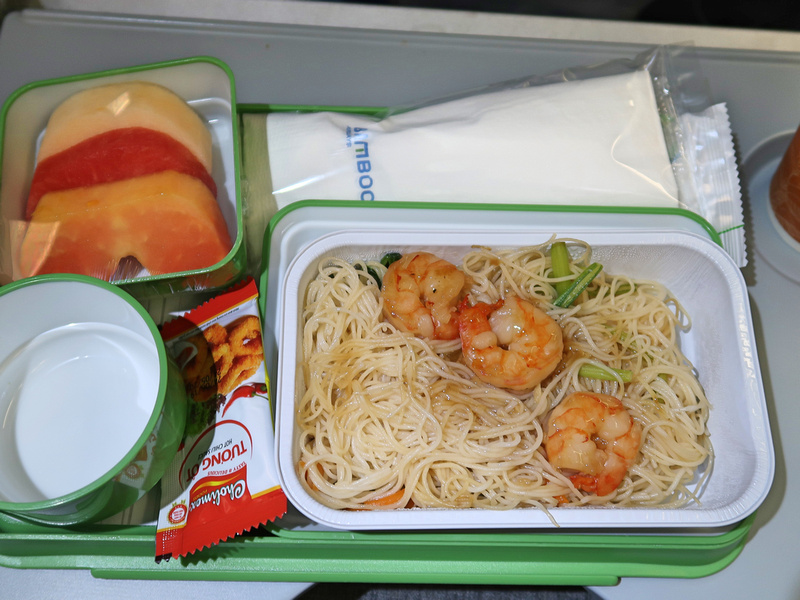 There is also a free drinks service so I got a coffee. 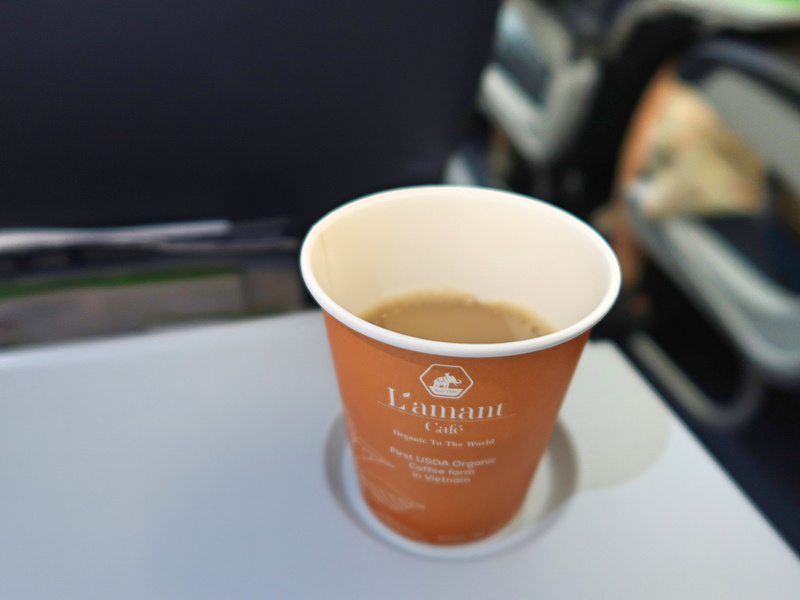 We arrived at Tan Son Nhat 30 minutes behind schedule due to the late departure at Hanoi. Tan Son Nhat is even more overloaded than Noi Bai, and our flight was disembarked on the tarmac as there are not enough airbridges in the domestic terminal. While the airlines of Vietnam are expanding at a rapid pace, the airports have not kept up with the growth. There is a planned new airport for Ho Chi Minh City, but will be years before it’s open. 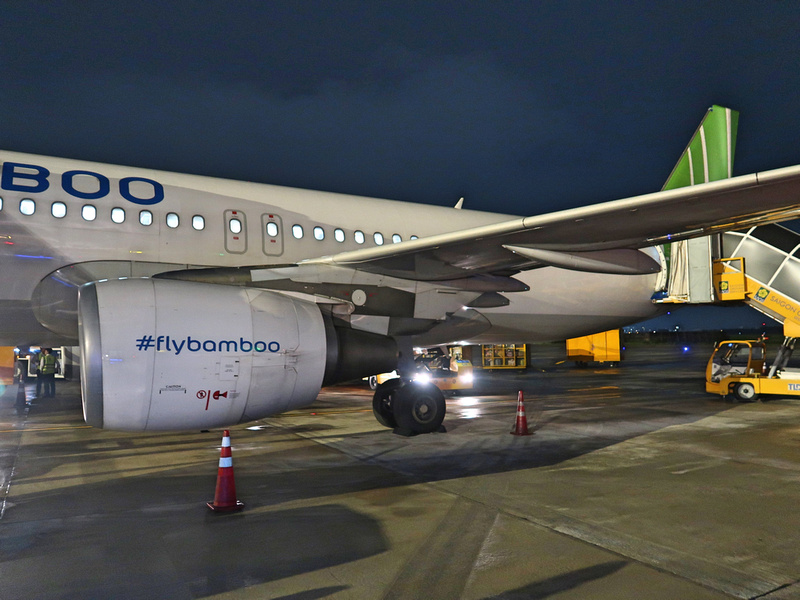 Overall this was a good flight option and no doubt I’ll be on another Bamboo Airways flight again. I wait to see where they will fly internationally. 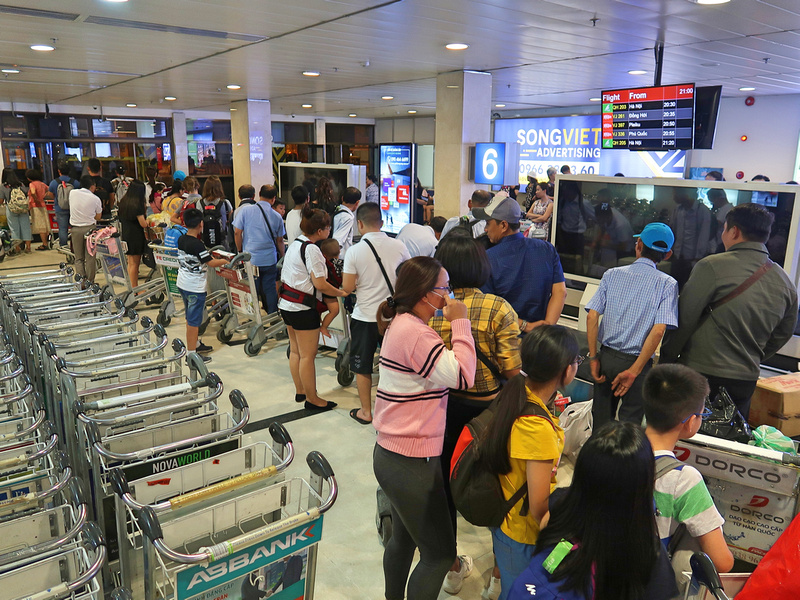