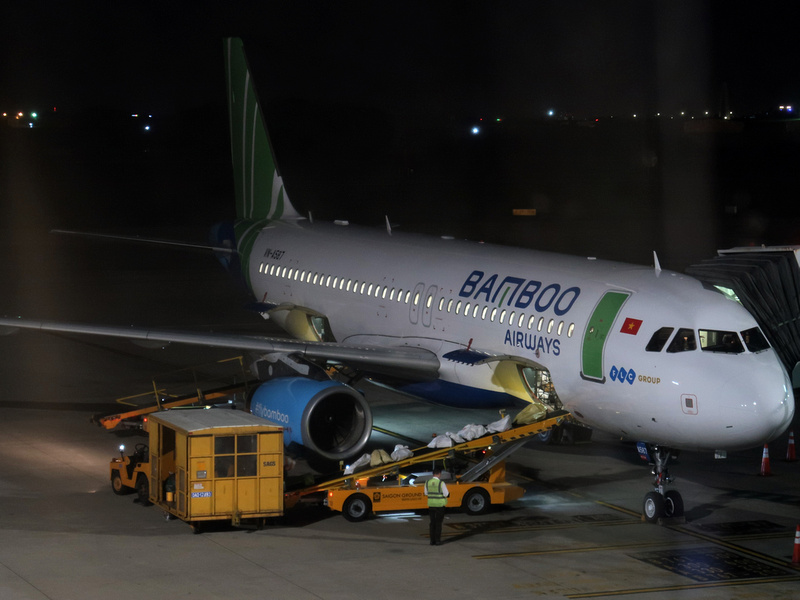 I flew with Bamboo Airways from Da Nang to Ho Chi Minh City. DAD-SGN is a busy flight route in Vietnam, and all of the domestic airlines have numerous options. I searched for the best flights via Skyscanner, and picked Bamboo for the combination of time of day and price.

I also picked Bamboo for variety. I’ve flown with Vietnam Airlines, Jetstar Pacific, and Vietjet Air enough times, while I had only flown with Bamboo once from Hanoi to Ho Chi Minh City. Bamboo had three flights available so I picked the morning flight (QH 153), departing DAD at 09:25 and arriving at SGN at 11:00. 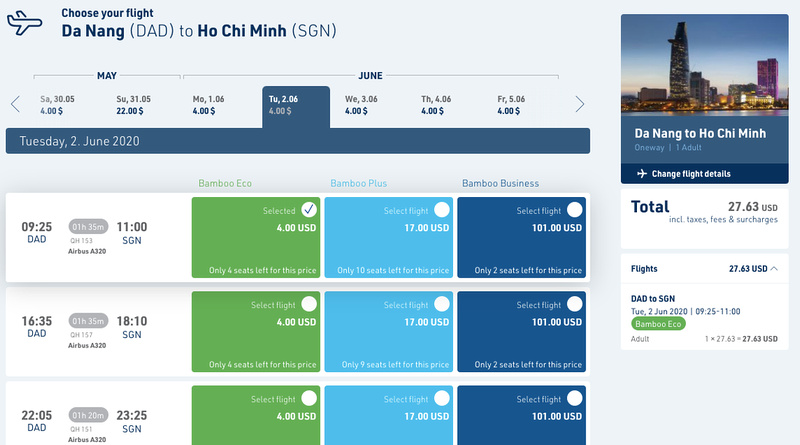 Bamboo Airways is a hybrid airline, mixing features of low cost airlines and full service airlines. During the booking process you can add extra features to your ticket. My ticket cost was 27.63 USD, which was a great deal even by Vietnam standards. 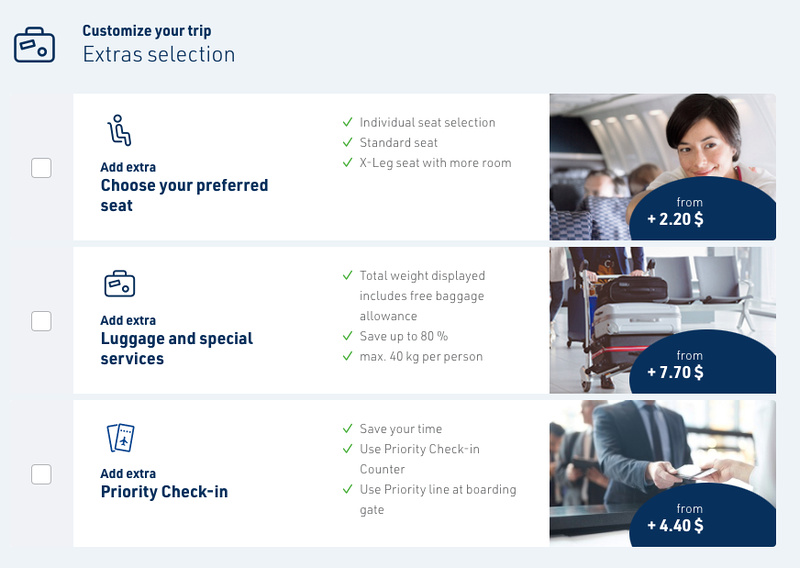 The day before my flight I received an email and text message (and missed call) notifying me that my flight had been moved from 9:25 to 14:15. Then later that evening the flight was moved again to 19:45.

There was no mention of why it was moved. Perhaps they were consolidating half-empty flights into one aircraft. I don’t mind when airlines do that as it is wasteful to have so many flights with seats only half sold. I was flying not long after the pandemic lockdown of April 2020, and as such domestic flights were still getting back to normal. At this stage flight schedules are going to take a while to get back to normal, and it’s better for everyone if airlines don’t waste money on empty flights. It would have been annoying though if I had an appointment in Saigon that required an on-time flight.

I arrived at Da Nang airport with plenty of time to spare seeing I had the whole day in Da Nang. The check in staff do a little welcome bow before starting their checking in duties. 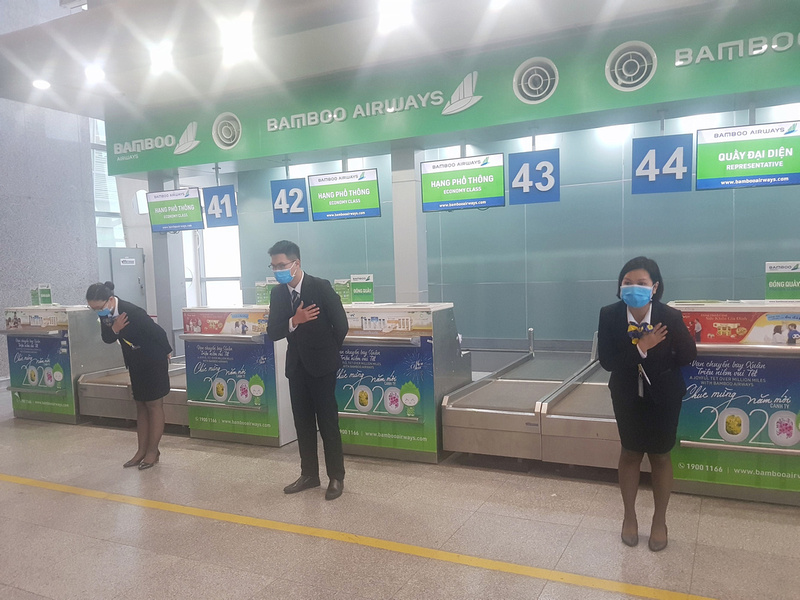 I discovered that my super-cheap flight didn’t include a checked bag. It wasn’t really clear in the booking process if it was included. That was another $15USD to the ticket. It was still a flight for under $50, but it was annoying to not have paid in one ticket in the first place. Apart from having to pay the baggage at another counter, checking in at the airport was straight-forward. 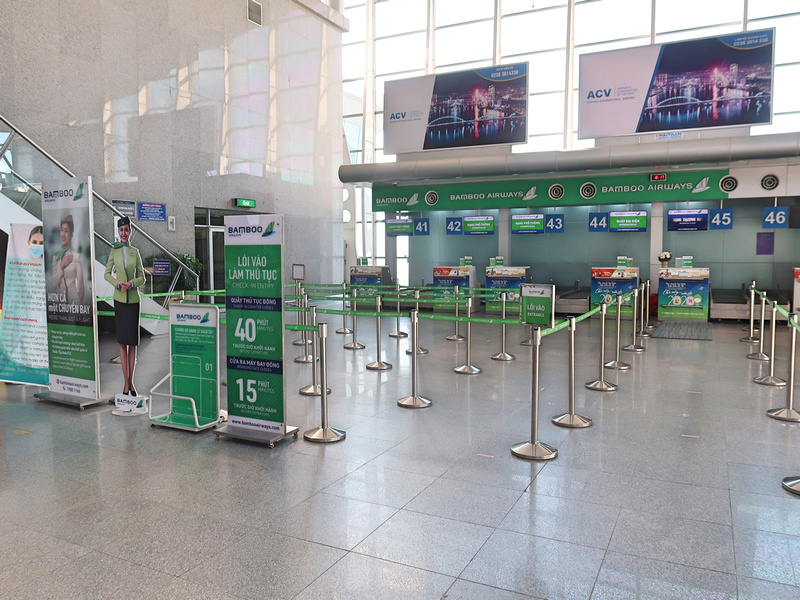 2019 was a big year for the Vietnam aviation sector, and Bamboo Airways were rapidly expanding their services before the virus slammed global tourism. Da Nang is a popular destination for South Koreans, and Seoul was the first international destination for Bamboo from Da Nang. 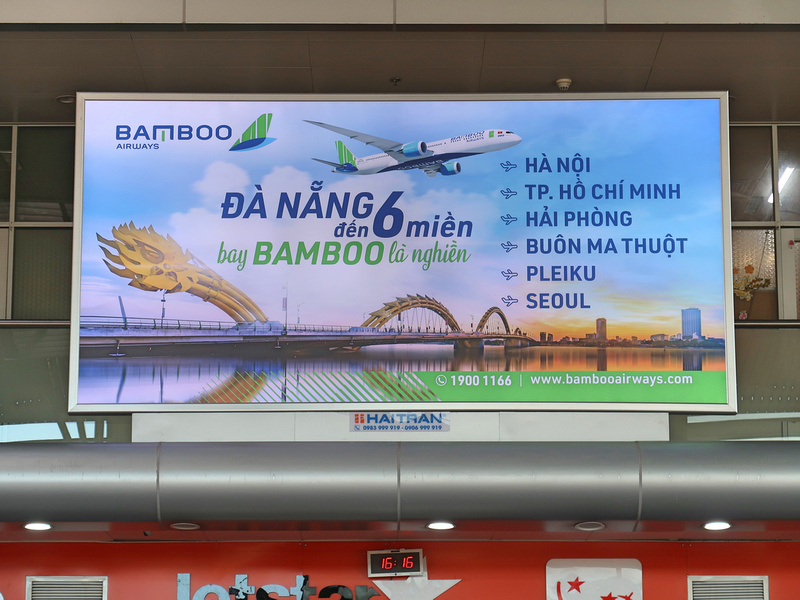 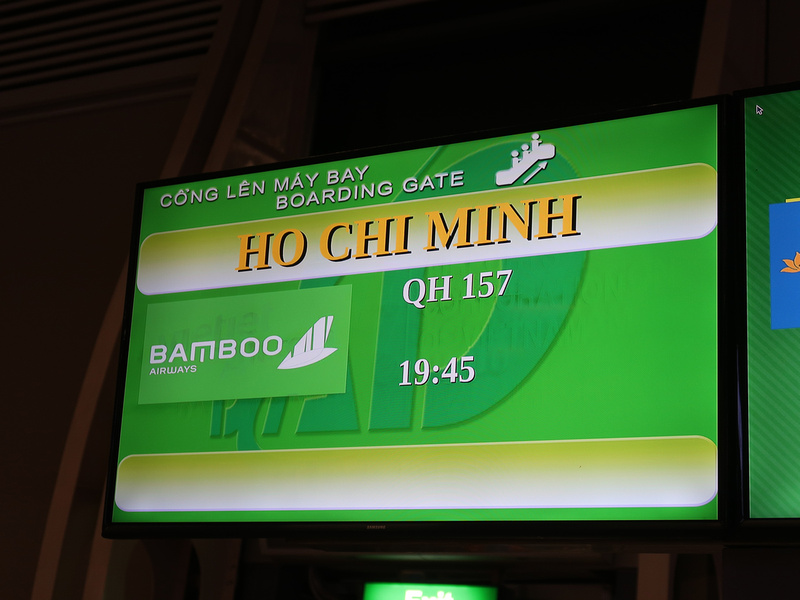 Bamboo Airways at Da Nang International Airport, now reduced to being a domestic-only airport with the international flight ban.

Bamboo Airways operate A320 aircraft for their domestic Vietnam services.

The leg room was about the same as other low cost airlines. 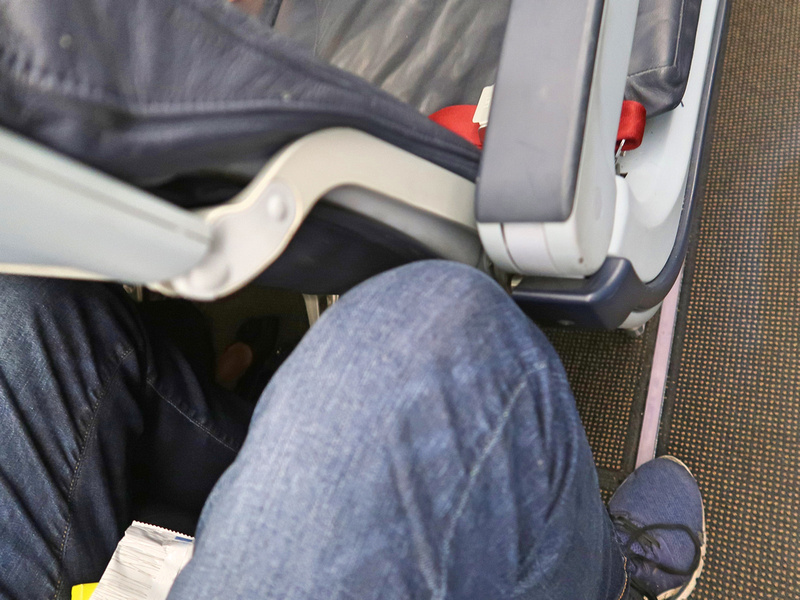 A wet paper towel was provided. 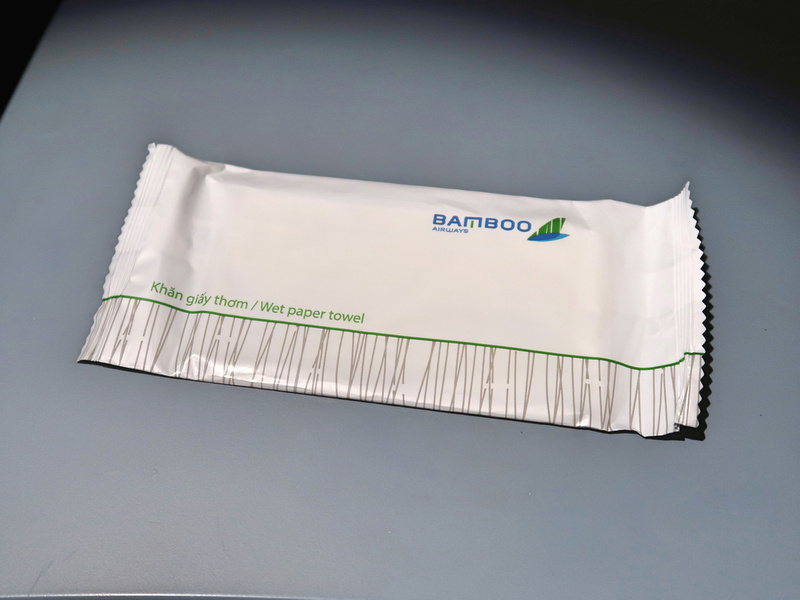 And free drinking water was also provided. Bamboo Airways were offering free meals on previous flights (thus they are described as a hybrid airline), but there was no meals on this service. This also might have been due to the pandemic, as most airlines around the world have stopped inflight meals on short flights due to safety concerns. 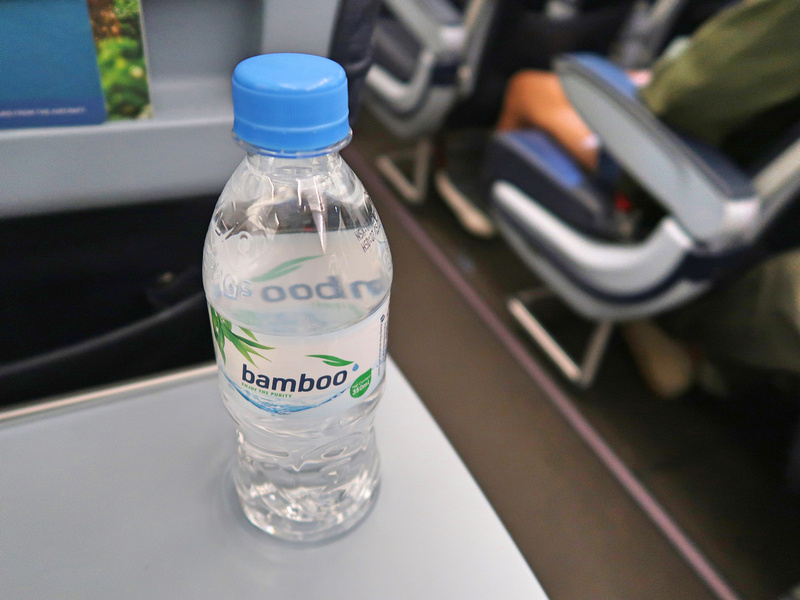 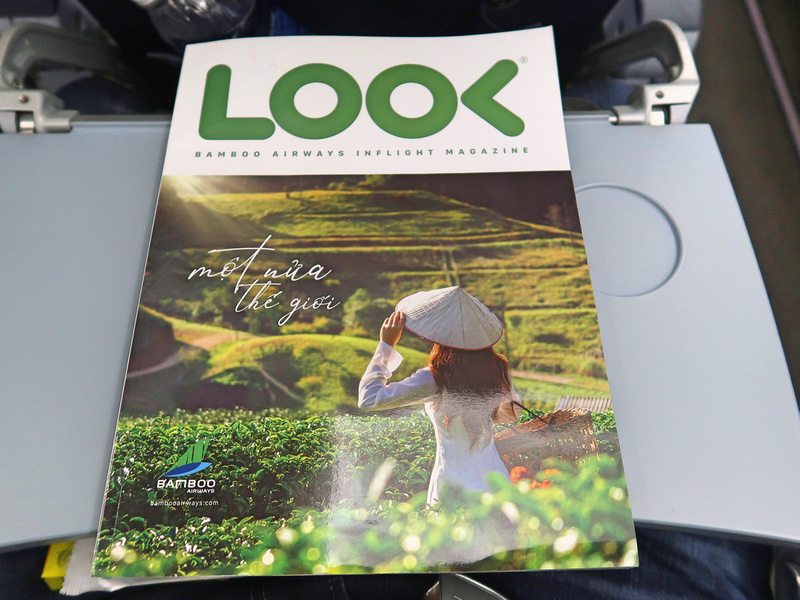 The back cover of the magazine still had advertising for the new Hanoi-Prague service. This was meant to be launched this year, but yeah screw you COVID-19. 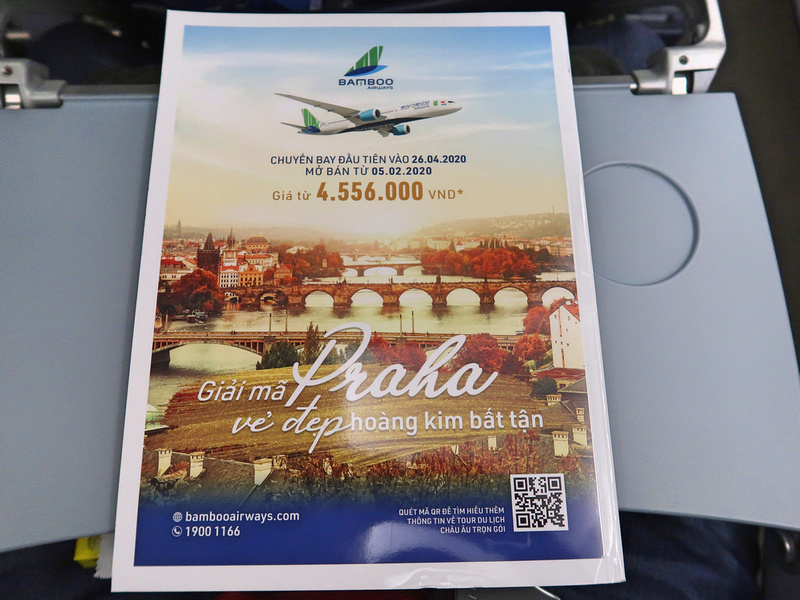 There was an interesting article about a Bamboo Airways pilot, Denise Ramos from Brazil. What a wonderfully globalised world it was pre-pandemic, where a female pilot from Brazil was working for an airline in Vietnam. 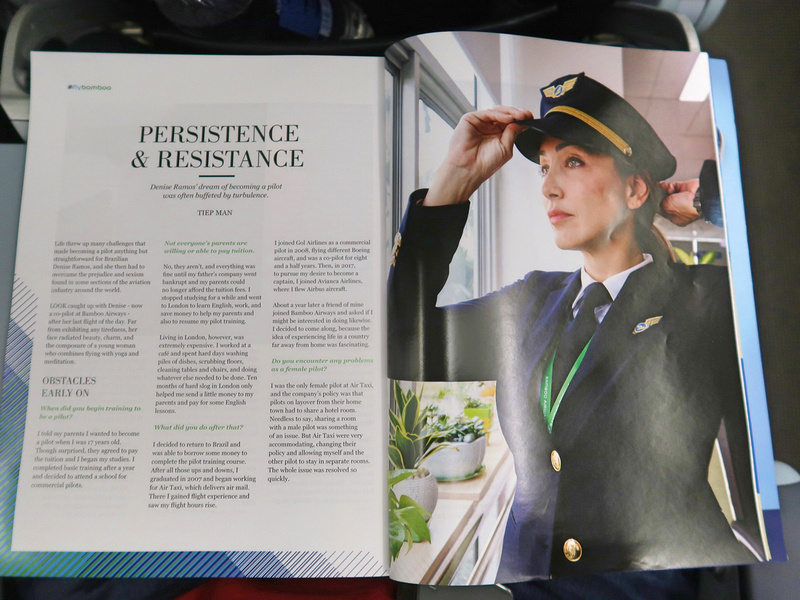 The magazine also had advertising for new pilot cadetships, portraying a male and female pilot. 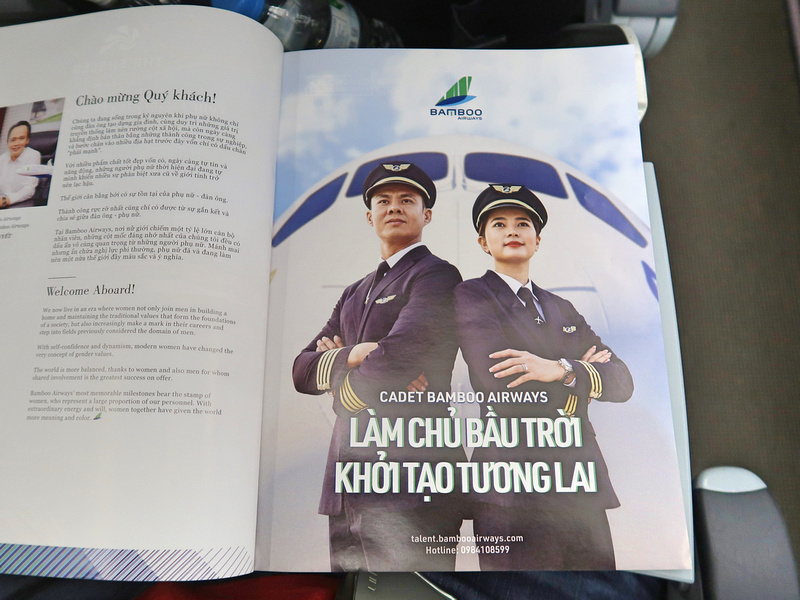 The flight arrived at Tan Son Nhat on time, and once again I was on a flight that involved a tarmac disembarkation. Even with the reduced flights, SGN airport doesn’t have enough airbridges. They are planning to build another terminal at SGN, and there will also be a new airport for Ho Chi Minh City in the future. Until then, don’t be surprised if you don’t have an airbridge. 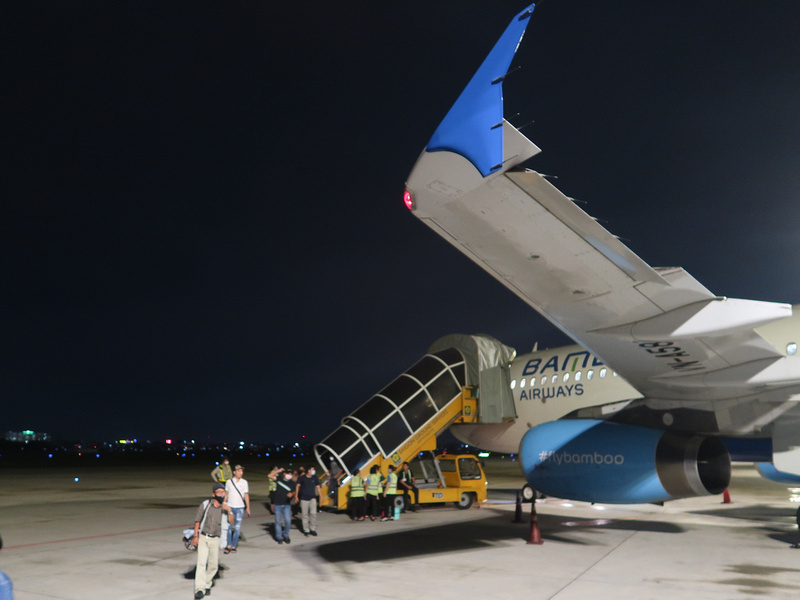 Despite it running over capacity, I find SGN to be an efficient airport, and collecting bags from domestic flights is usually quick. 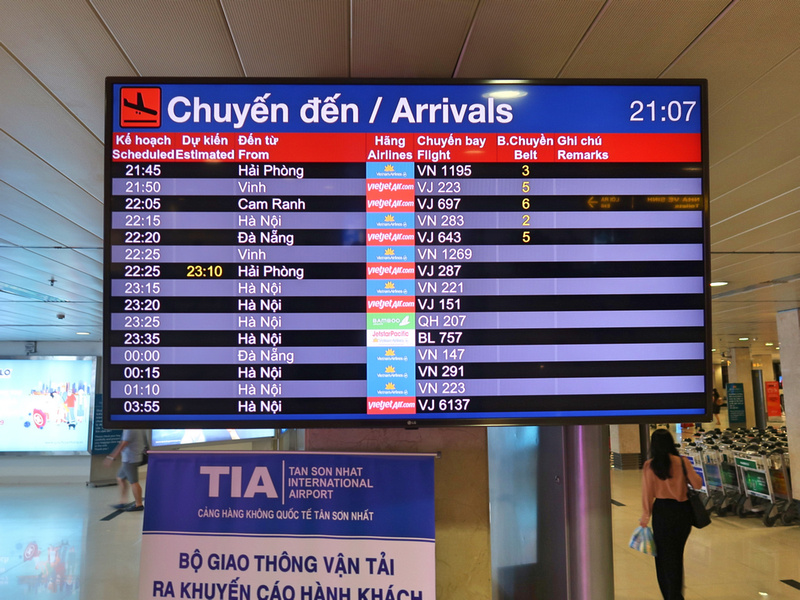 Overall this was a good flight option despite the changed times. In these “unprecedented times” (as unsolicited emails keep telling me) I am not expecting flights to be running as normal for a while. I’m happy to be flying at all, and hopefully this new airline can weather the storm.