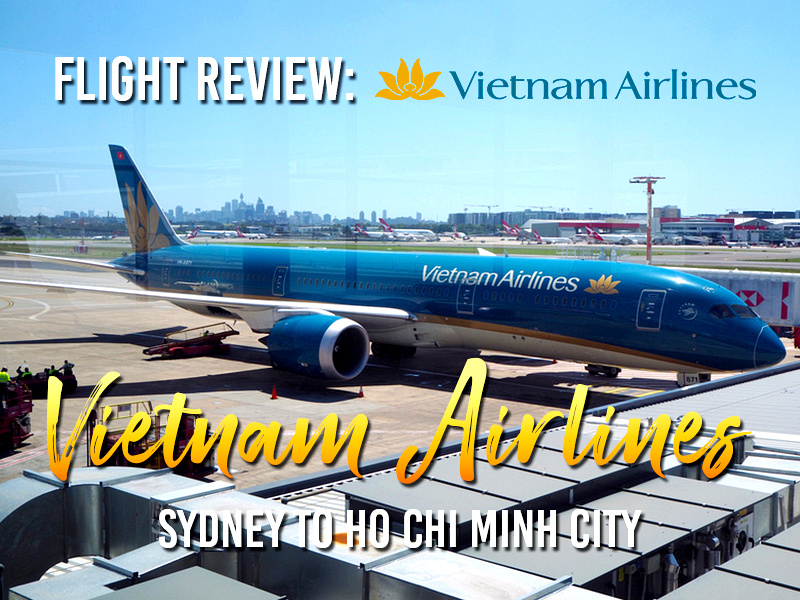 I flew with Vietnam Airlines from Sydney to Ho Chi Minh City. The flight was booked for me as part of a media trip, and it was the return leg of my Ho Chi Minh City to Sydney flight.

My day started in Brisbane where the press trip ended. I took a flight with Qantas to Sydney, but I wasn’t able to check the bag through on the Vietnam Airlines flight. The VN flight used to be codeshared with QF which would have enabled through check-in. Now that Jetstar operate the same route, Qantas now codeshare on the Jetstar flight.

There was no online check-in available for this flight (possibly due to needing to check visas), and because my flight was booked on my behalf I wasn’t able to pick a seat. The flight departs at 11.50, so check-in would have opened at 8.50. I got there at 9.13, and those 25 minutes made all the difference in being at the back of a long queue. This is why I always get the check-in early, because I hate lining up.

I had resigned myself to a middle seat, and figured it would be ok for a day flight. I was in the queue for an hour and 10 minutes, and to my utter surprise when I asked for an aisle seat they said I could have an emergency exit row aisle seat. 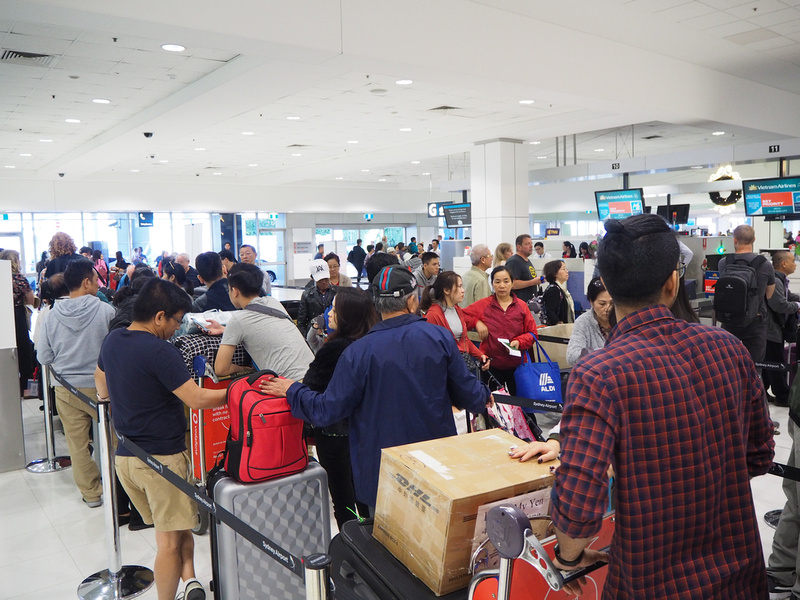 It took 15 minutes to clear security, and the passport control in Australia is now so easy with the facial recognition machines. 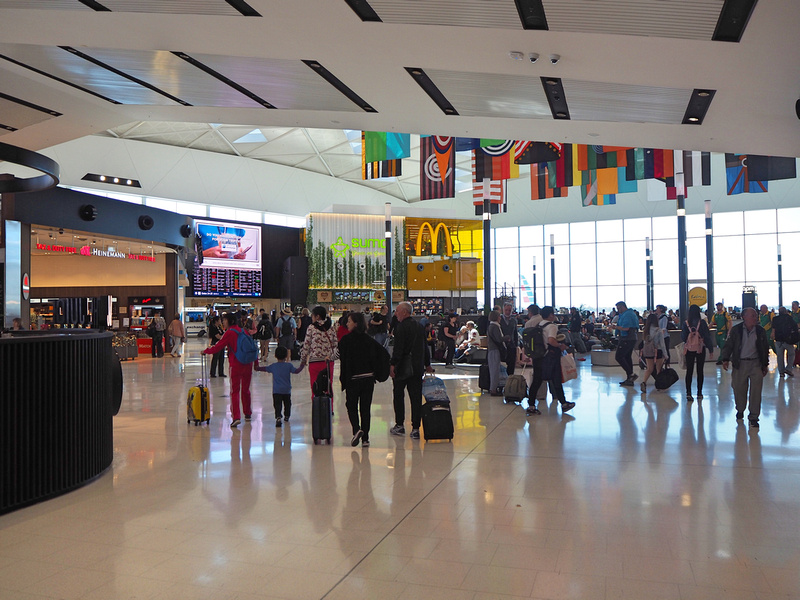 The flight departs at 11.50 and arrives at in Ho Chi Minh City at 16.25 for a scheduled flight time of 8H, 35M. This flight time is the optimal flying time for this route. 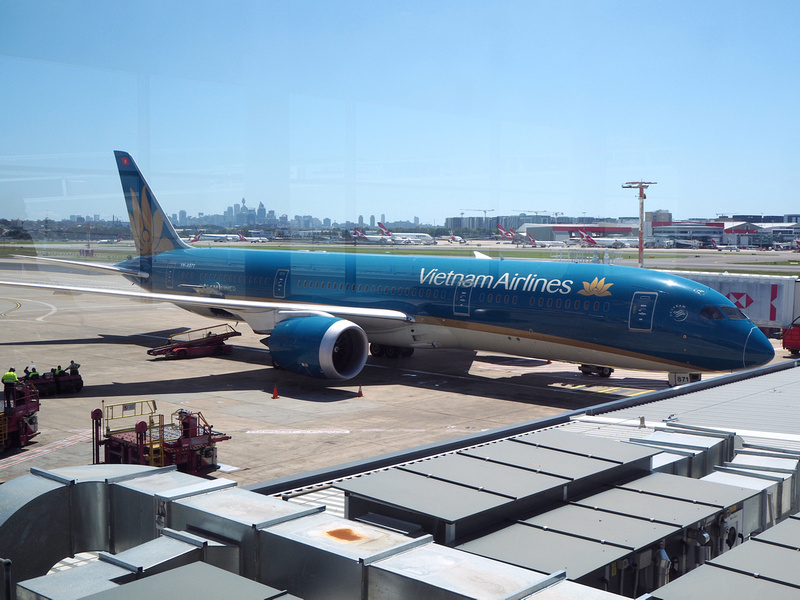 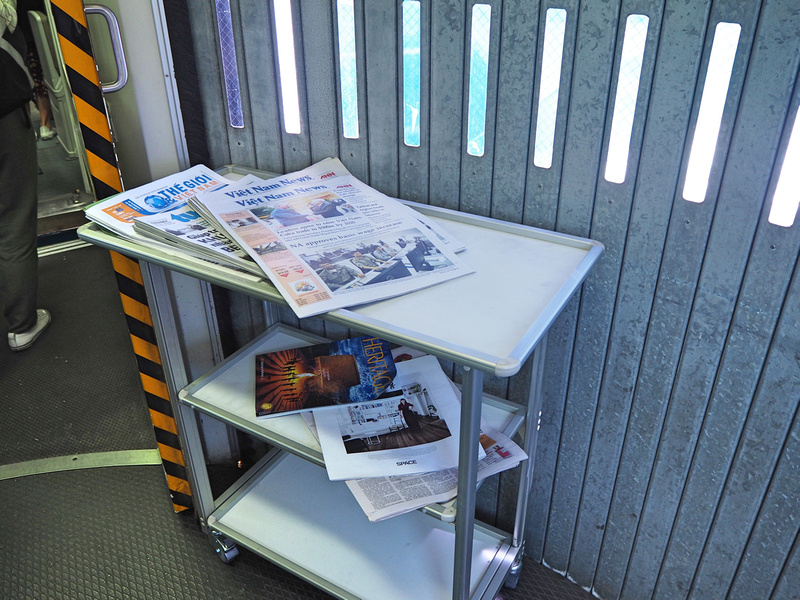 Here I am stretching my legs in my exit row seat. There were two other tall foreigners in the exit row, so perhaps they save the seats for the big boys. 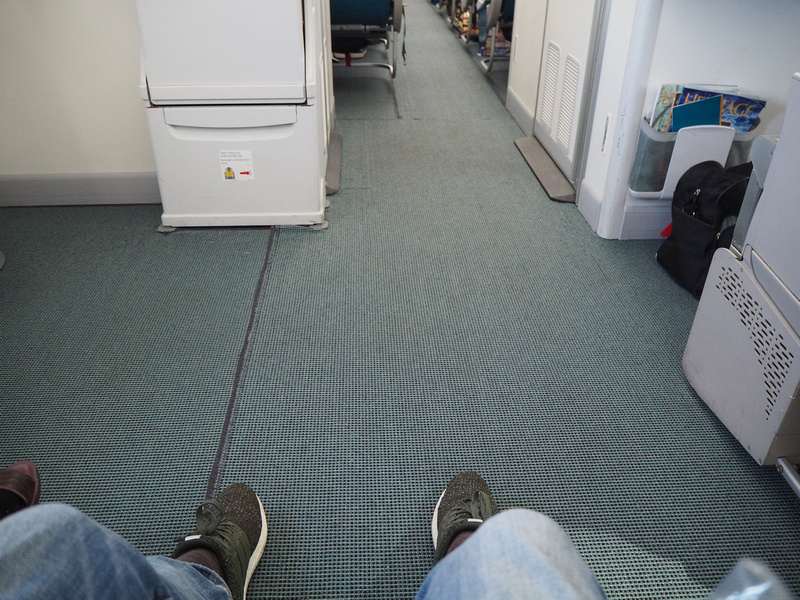 Vietnam Airlines fly the 787 Dreamliner between Ho Chi Minh City and Sydney. I love the big windows of the 787, but one thing I don’t like is that most airlines who operated the 787 have opted for a 3-3-3 seat configuration. Boeing had sold the dream of the Dreamliner as being a spacious cabin with a 2-4-2 configuration (so one less seat per row). In the end it was airline accountants that have ruined the Dreamliner dream by squeezing in an extra seat. 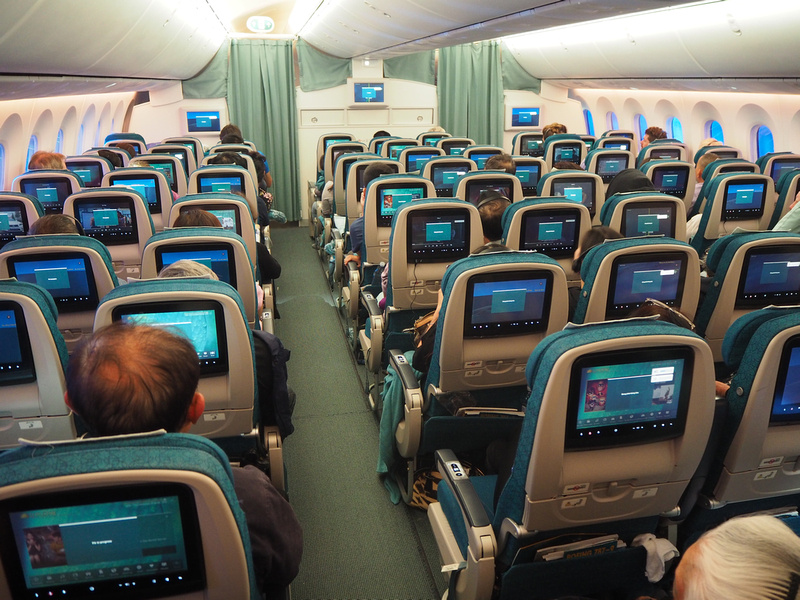 An amenities kit that includes a toothbrush kit, socks, and eye mask. 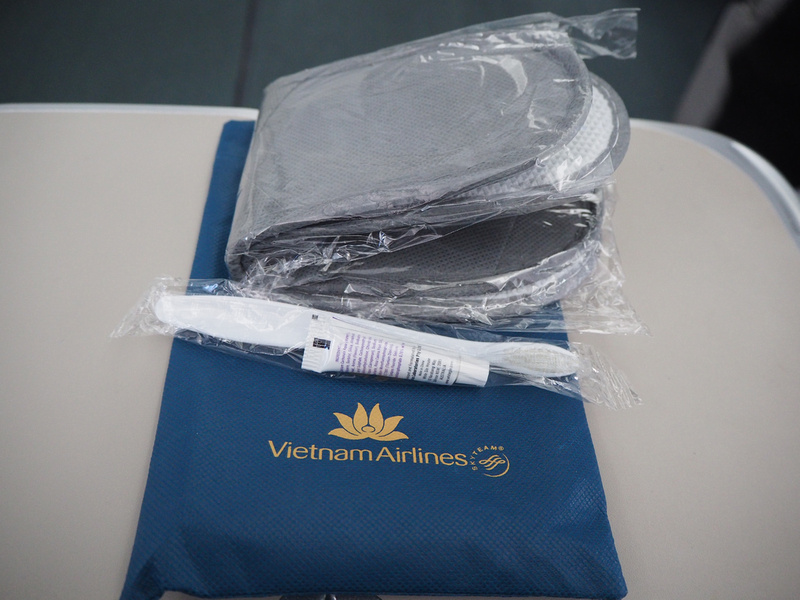 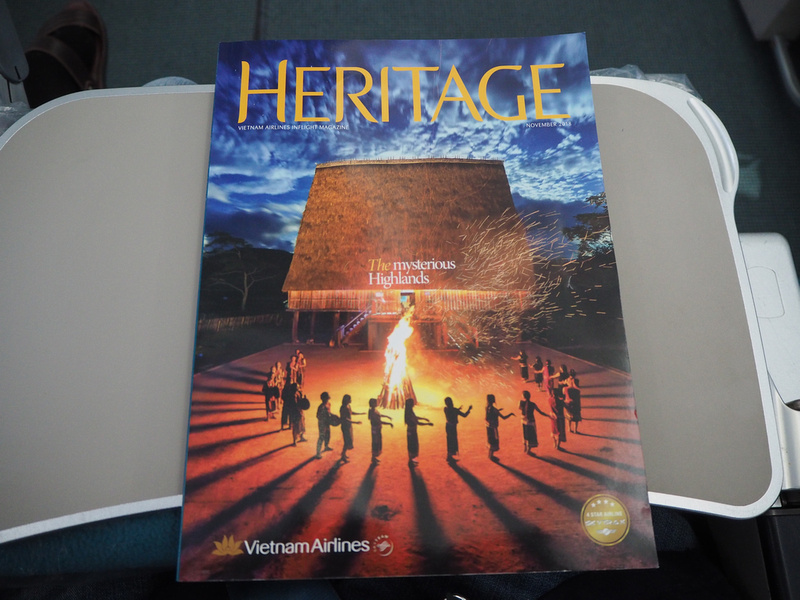 I always read it for the route map and to see if there are any new flight options. 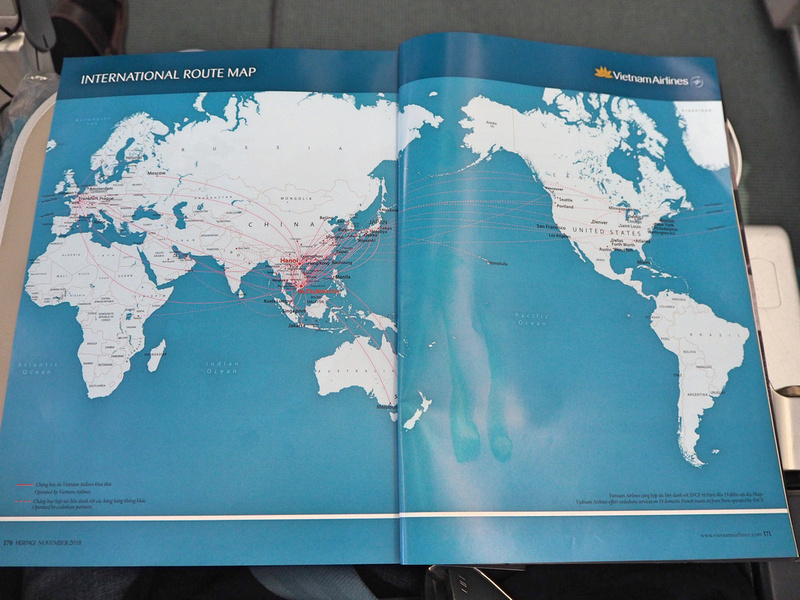 And I also read it for the ads. I have an urban development blog so it’s interesting to see which projects I’ve written about are being advertised. This project has featured in my future Saigon list. 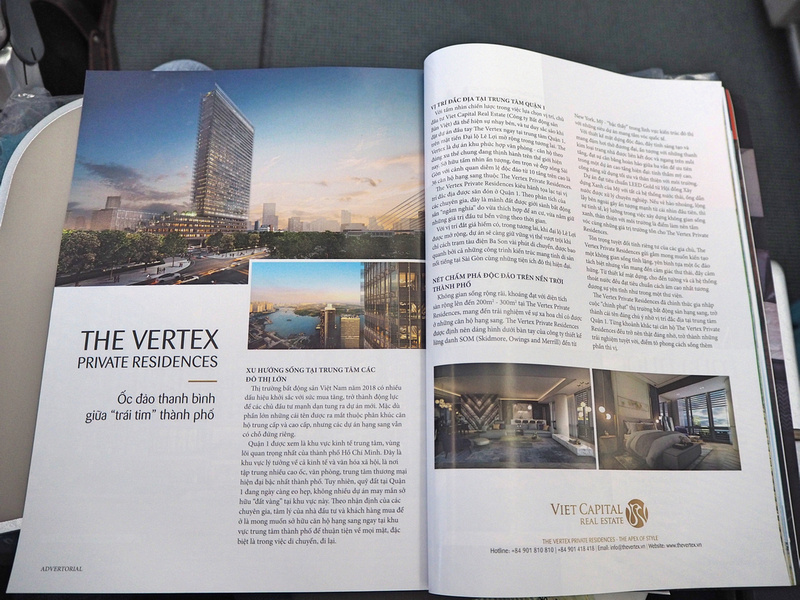 A welcome drink and snack is served with the flight menu. 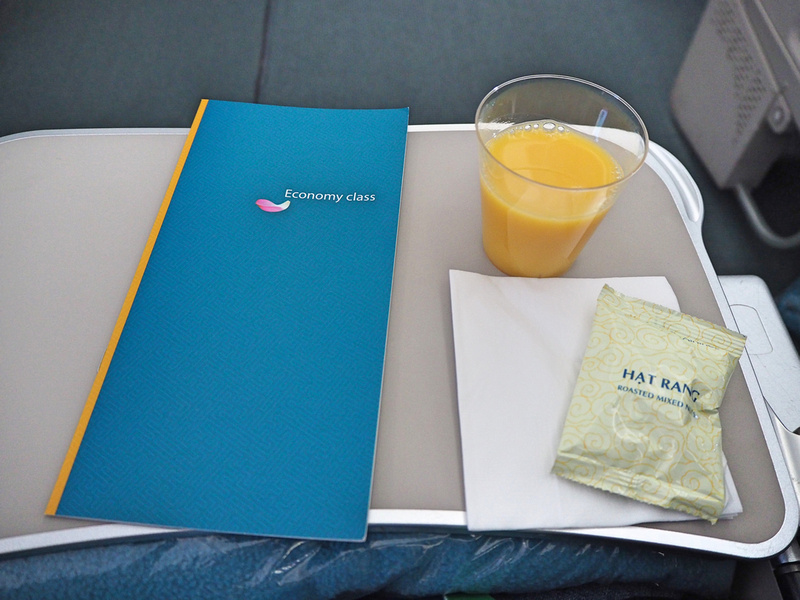 I got the beef and rice, which came with a salami salad, bread and a cake. 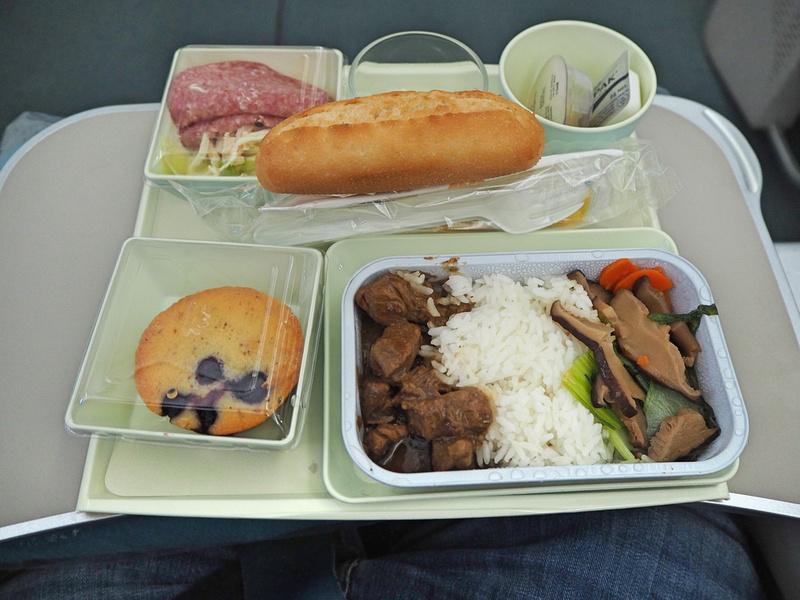 There is onboard entertainment with a new selection of movies updated monthly. On overnight flight (such as my previous SGN-SYD flight) movies are essential for my sanity as I can’t sleep. For day time flights like this I am content to work on my laptop. I actually enjoy the day time flights from Australia to Southeast Asia. I did Sydney to Singapore last year, and AirAsia from Melbourne is another one I do. 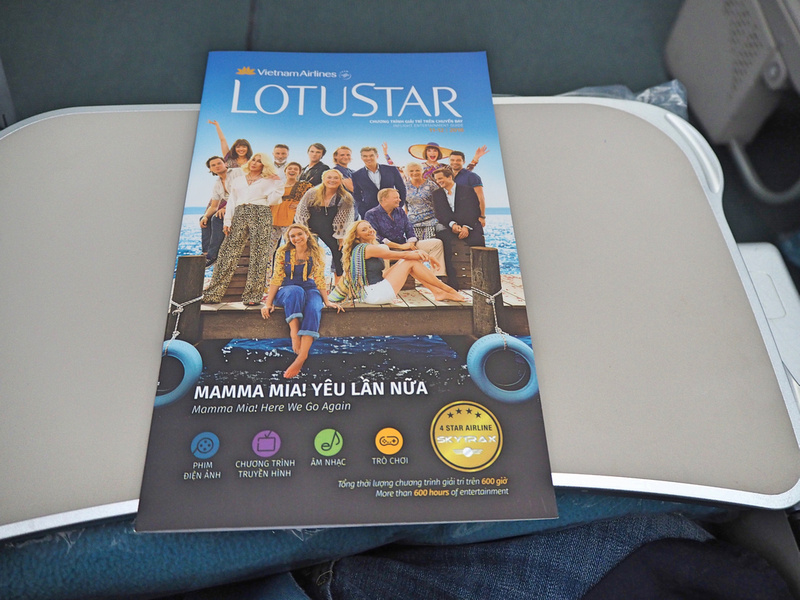 A second meal is served two hours before landing, and without thinking I ordered a second serving of beef for the day. This was the beef and noodles with a fruit salad. 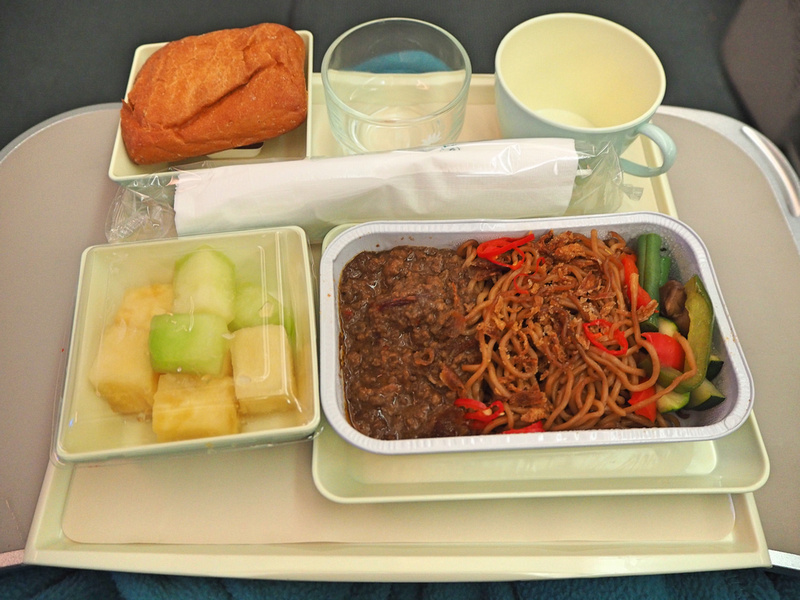 The flight arrived close enough to being on time, but then we were stuck while waiting for a place to park. In the end the plane was parked on the tarmac and we got bused to the terminal. This is a common problem at Tan Son Nhat Airport, which long ago reach its capacity.