Rhodes is one of the most visited places in the Mediterranean. During the holiday season there is a different cruiseship in the harbour every day, and a steady stream of charter flights.

The Old Town is a big attraction for visitors, but most come to relax in the 300 plus days of sunshine on one of the many beaches. The Island is big enough to handle the crowds as well. One of the best preserved medieval towns in Europe

The Island of Rhodes in the Dodecanese Islands of Greece is one of the most visited places in all of Greece, and for good reason. The old town of Rhodes is one of the best preserved medieval towns in Europe. The entire city wall still intact and much of the Old Town is still paved with cobbled stones. The town with its maze like streets are filled with buildings representing all of the historical periods of the Island.

Rhodes is best known for the Colossus of Rhodes, even though there are no remnants to view and its original location is disputed.

Many of the buildings from the Knights’ period are still intact, and the Ippoton (Avenue of the Knights) remains relatively unchanged. What makes the Ippoton even more remarkable is that for such a popular tourist spot, there are no trinket shops cluttering the view. [Ippoton – Avenue of the Knights]

Probably the best gelati in Rhodes

When in Old Town Rhodes, visit the man in the gelati van – probably the best gelati in Rhodes. Everywhere in Europe you see kids playing football in the most unusual locations due to the lack of urban space. Here the space between two fortified walls has been put to good use as a football ground. When I think of a trip to Europe, I think of the culture, old buildings and having coffee in a cafe on a cobblestone street. I don’t think of going to the beach. Coming from Australia, we’ve got beaches in spades, but not much in the way of culture and old buildings.

That goes for Rhodes as well. Rhodes Old Town has so much history packed into it and it is a fascinating place. The beaches though are pretty rocky for my taste. In fact the beaches near the old town supply the cobbles that still make up much of the old town pavement.

If you are looking for sandy beaches in Rhodes, head to the east coast. 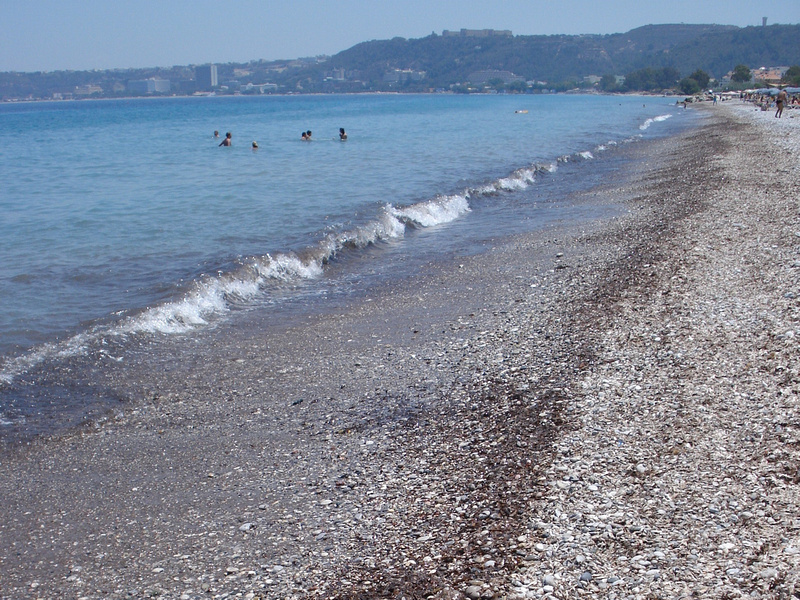