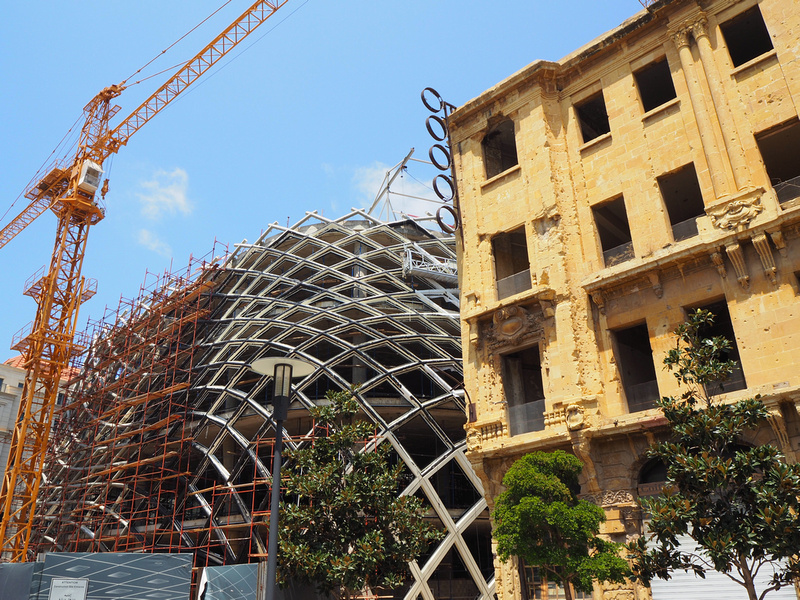 Sometimes you get a good feeling about a place even before you step foot on its soil. This was the case for Beirut when I first caught a glimpse of the city. The airport is close to the city centre, and if the flights are arriving from the north the flightpath goes over the old city. When I saw Beirut for the first time through my grimy window I knew this would be a city I was going to love exploring. 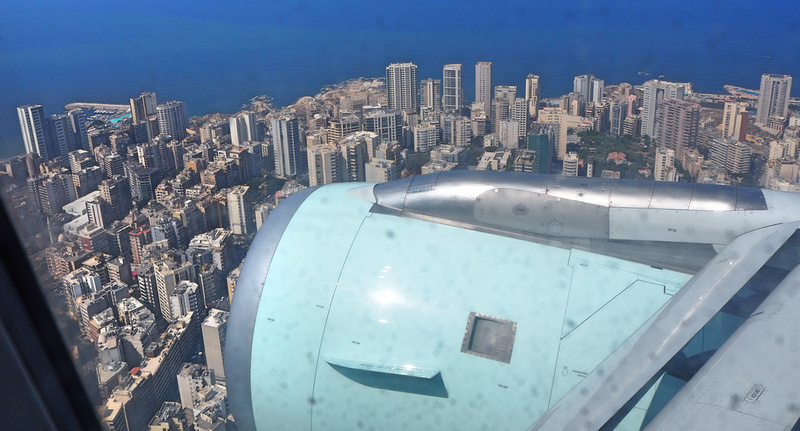 What people associate Beirut with varies wildly. As a traveller I know lots of fellow wanderers who have come here and raved about it, so I probably have a more positive association of Beirut. Unfortunately for most people, Lebanon is still associated with war. As someone who is based in Vietnam this is not surprising, as I still meet people who can only associate Vietnam with the war, even though the war ended in 1975.

The Lebanese Civil War began in the same year that the Vietnam War ended, running from 1975 to 1990. I finished school in 1989, so during the whole of my 80’s school life Lebanon was always in the news for the wrong reason. Beirut became a byword for a war-torn or dangerous place (ie “that neighbourhood is like Beirut”).

But I also knew that Beirut was known as the Paris of the Middle East, being a city of beautiful architecture with a (relatively) liberal population that knows how to party. My party days are over, so my main mission was to explore the architectural highlights, and see how the new Beirut is being rebuilt.

When I was booking accommodation I didn’t really know where to stay, and I ended up picking a place a bit further out than I would have liked. I should have stayed closer to the harbour, but where I stayed turned out to be instructive for understanding the recent history of the city.

I was staying near the big pine tree park, Horsh Beirut. The main road from that park runs towards the downtown area and sea front. It took about 45 minutes to walk to the downtown area. Normally that would be an easy walk for me, but was hard going in the summertime heat. The road that connects Horsh Beirut to the downtown area was the road that formed the Green Line. The Green Line was the dividing line between East and West Beirut, and it became a no mans land with battle-scarred buildings on either side. To get an idea of what it looked like check out these photos of life along Beirut’s Green Line. 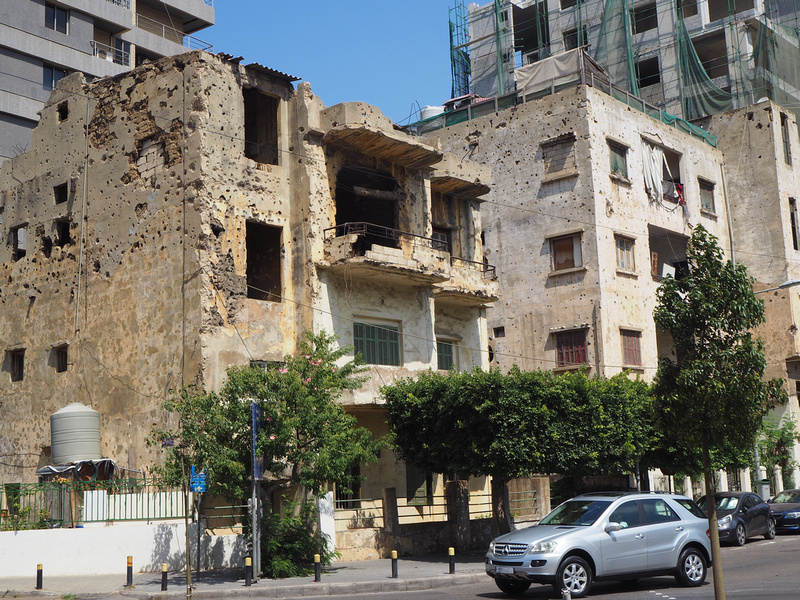 It’s along here that you can still see most of the damaged buildings. This was the first street I walked in Beirut, so my initial impression of the city was of it being far more war-town than it actually is. Of course get beyond the former Green Line area and you will see the Beirut that was known as the Paris of the Middle East.

While most of the damaged buildings are being renovated or demolished, one building has been preserved as a monument to the war. Beit Beirut is a cultural centre that documents the history of Beirut and the civil war. Unfortunately is was temporarily closed during my visit. 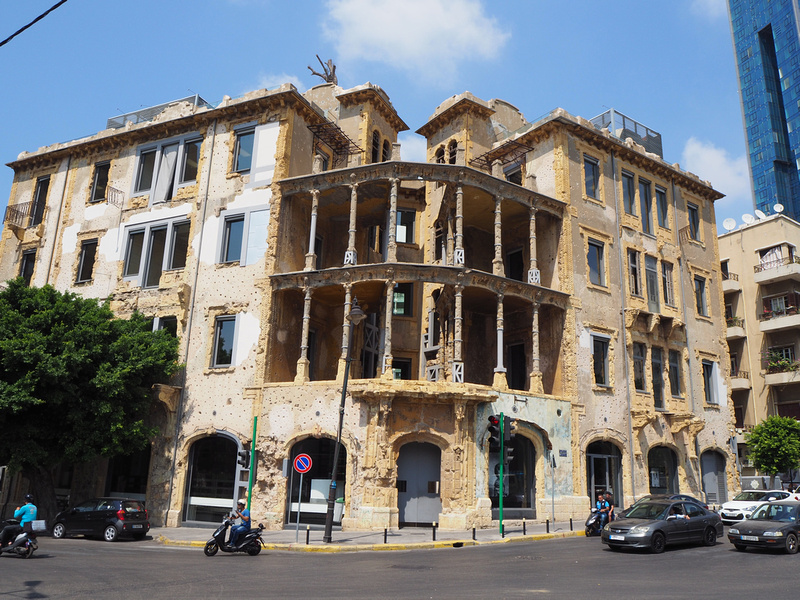 Another clever repurposing of a damaged building is this mural by Jorge Rodriguez-Gerada. The building is in an area that’s being marketed as the Beirut Digital District, and the image is of a boy working on a circuit board. 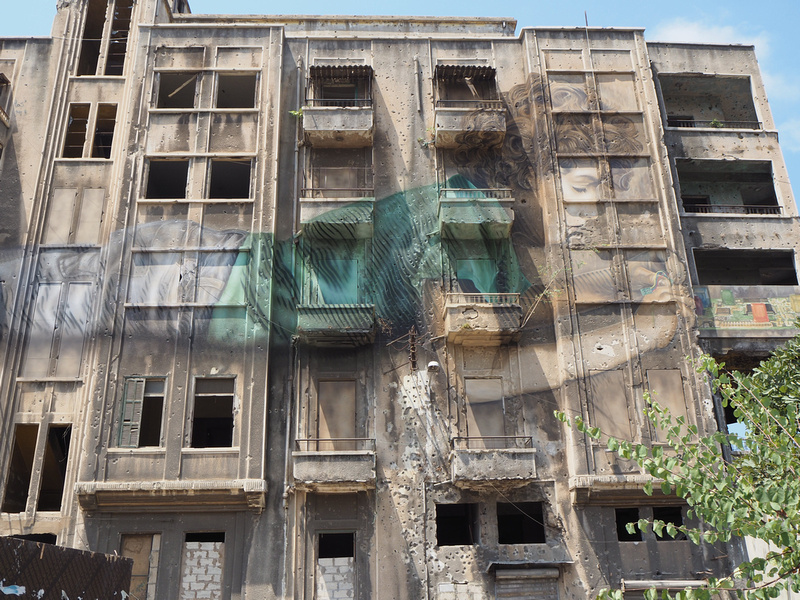 I went a cafe at the Beirut Digital District building, where tech companies and co-working spaces are based. There were lots of people about and there was a good energy about the place. 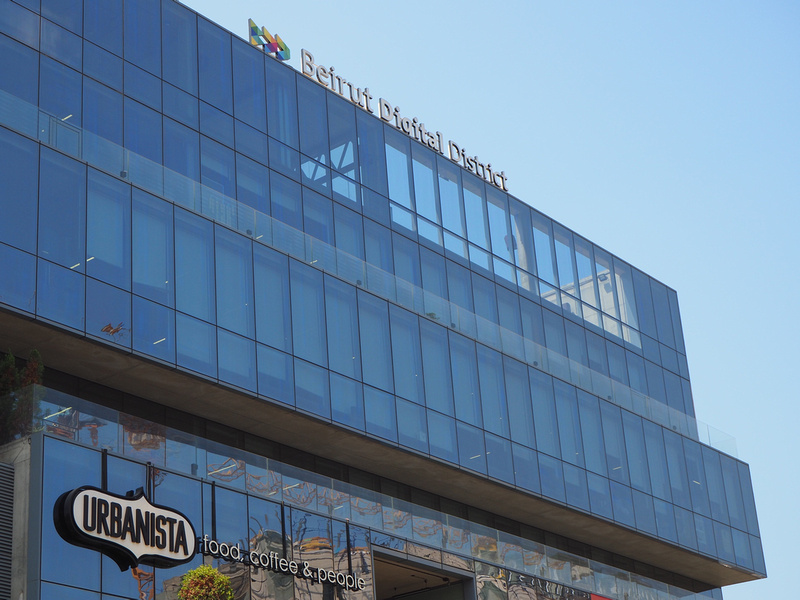 With so much of the downtown area badly damaged or destroyed, the city has a lot of empty space to reinvent itself. Beirut is fighting to find a balance between preserving damaged buildings, and demolishing completely to build something new. 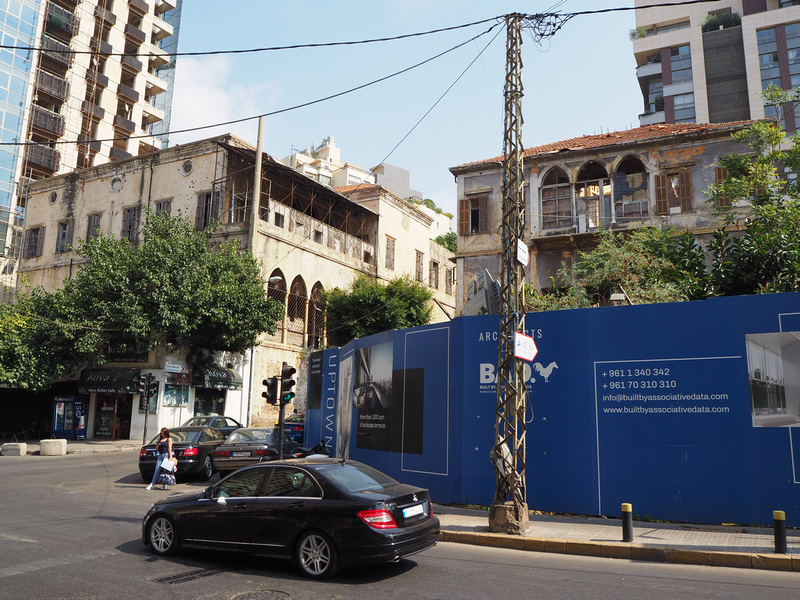 Some of the new buildings are world class. Before I came to Beirut I had seen the Beirut Terraces building on various architecture websites. 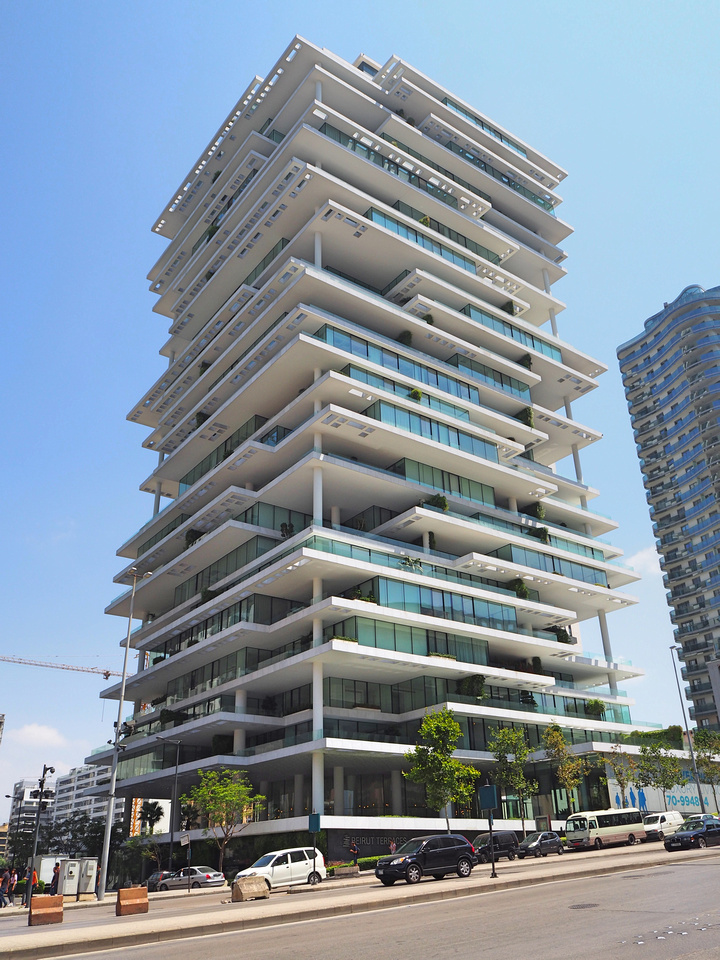 One building I wanted to visit was the Phoenicia Hotel. My dad had a stopover in Beirut in the 60’s, back in the day when stopping in Tehran, Kabul, and Beirut was a thing. In those days, flying from Australia to Europe involved several stops along the way, and some airlines would offer free stopover deals in different cities. One of those stopovers included a stay at the Phoenicia.

I was amazed to see that the building not only still exists, but it still looks like Beirut from the 1960s jet-set era. Maybe I will stay here next time. 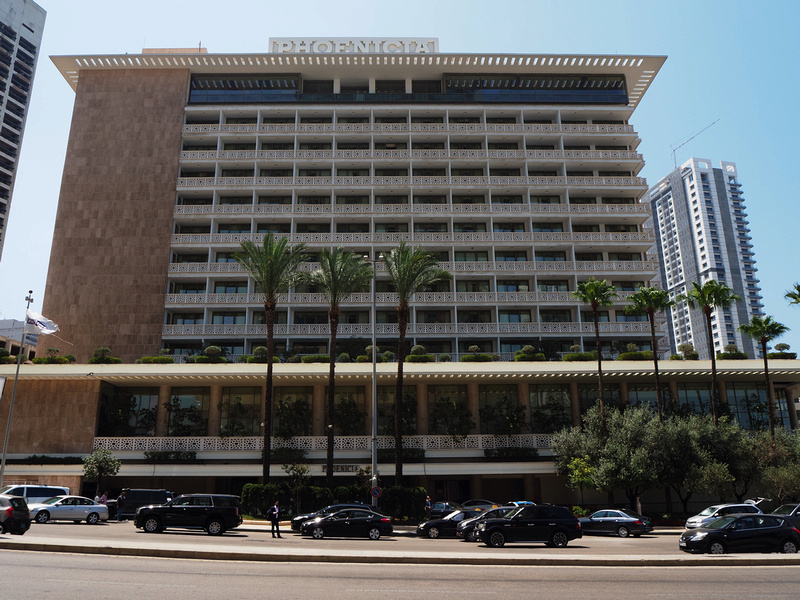 The downtown area is where most of the war damage was. Some streets have been rebuilt in a similar style to what was once there. 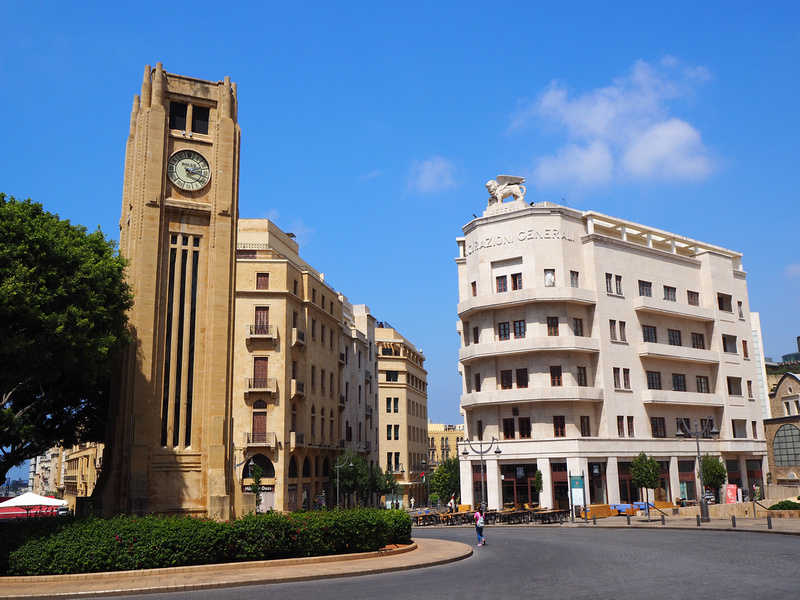 The two religious landmarks are the St. George Maronite Cathedral and the Mohammad Al-Amin Mosque, side-by-side in downtown Beirut. 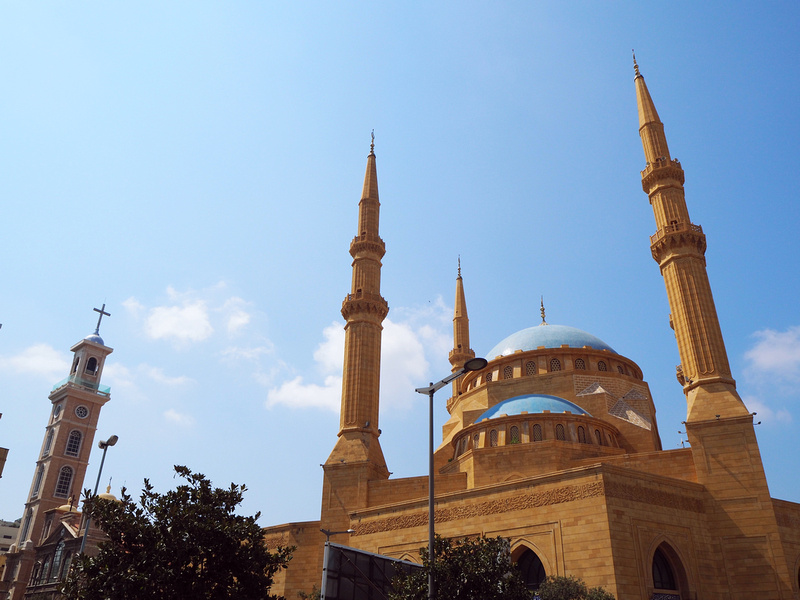 A ruined church near a major apartment construction project. 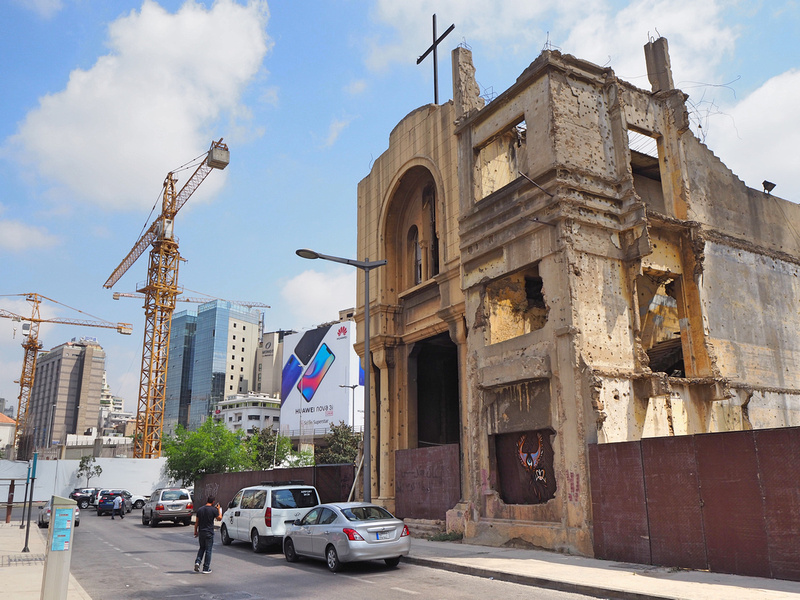 In addition to the war ruins, there are Roman ruins here as well. 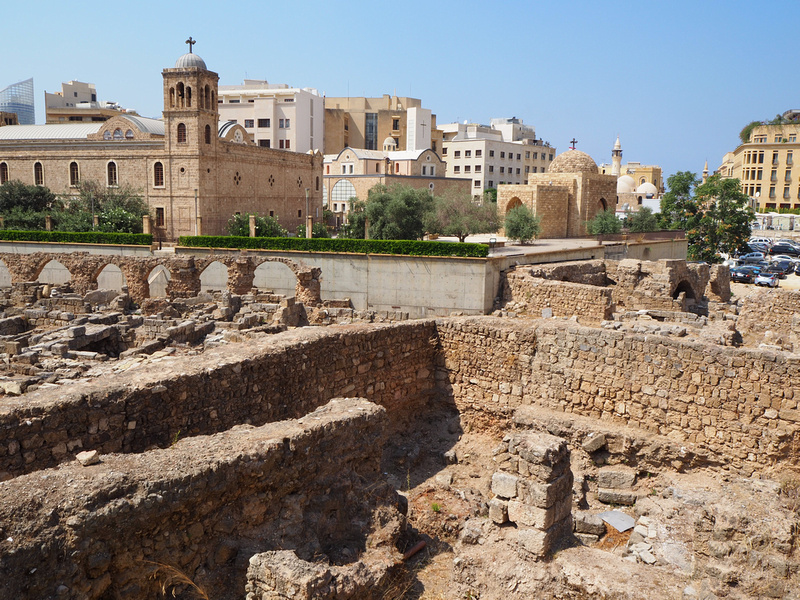 I saw a sign pointing to “Beirut Souks” which sounded promising. This was not a souk that I imagined though, as it is more like a giant duty free airport shopping mall. There are rows of luxury stores from all the usual brands that you see everywhere, but hardly anyone shopping. 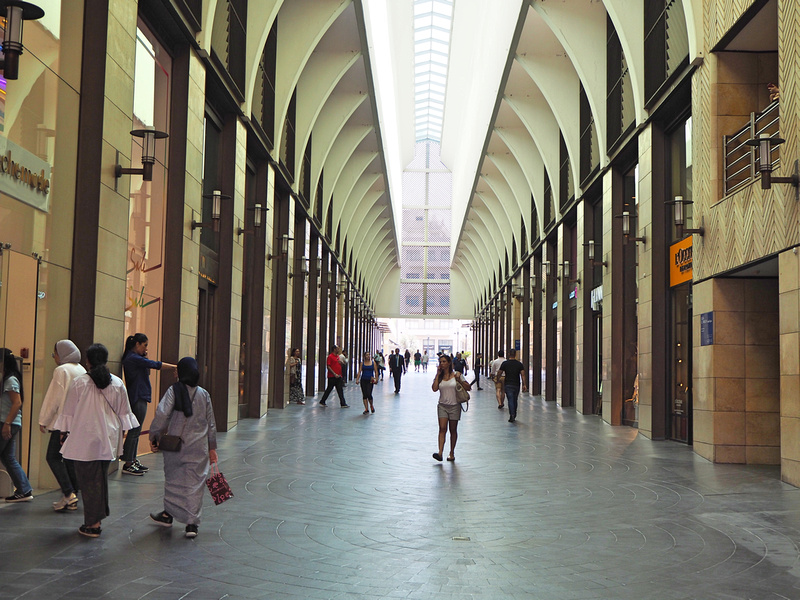 Indeed, much of the rebuilt downtown feels like it is missing people. Its cause isn’t helped by the fact there are army barricades at some of the main entry points. When I first went past I thought it was a gated community for the elite, or perhaps a diplomatic quarter. It wasn’t until I saw people walking in and out freely that I realised it was open to the public. 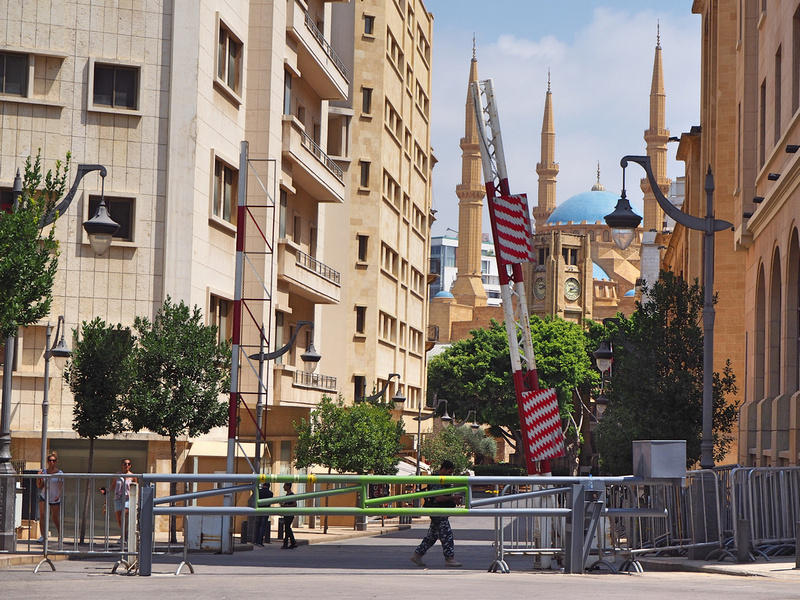 There is still a military presence on the streets, so there is some way to go until there is a return to normalcy. 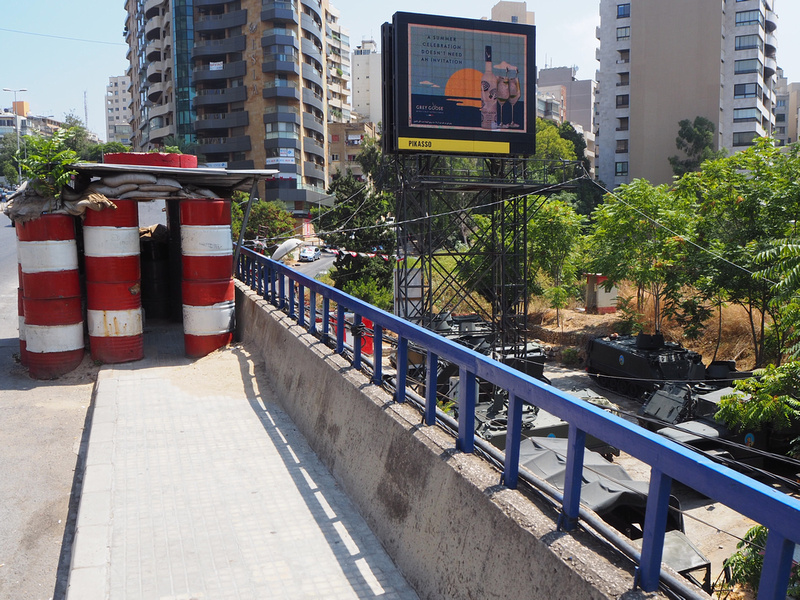 Some government buildings are still heavily fortified, and there were a few times I walked down a street only to be turned back by an army checkpoint. 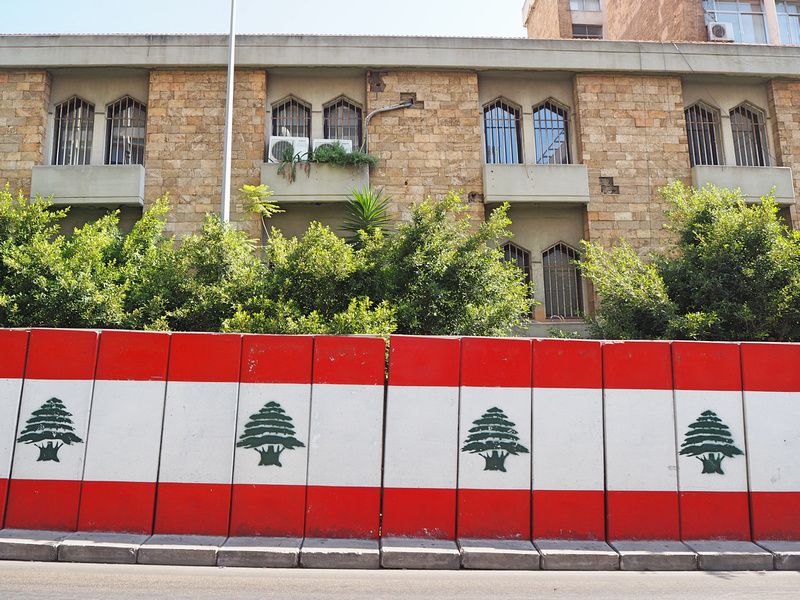 And even when you don’t see the army there are billboards advertising the army. 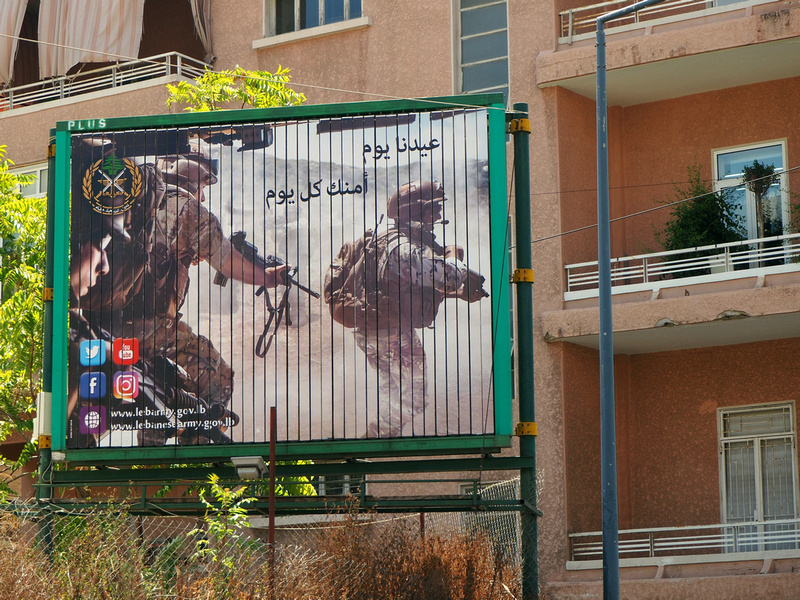 There is still a lot of potential to remake downtown Beirut into a world class city again, but what it will look like is uncertain. Some planners have envisioned turning Beirut into a new Dubai. I’m all for the modern designer architecture, but Beirut is never going to compete with places like Dubai or Doha, where modern cities have been fashioned out of the desert.

Beirut already has the advantage of built heritage, so by preserving what they already have would would make the city stand out more than by copying the new Gulf-state cities. 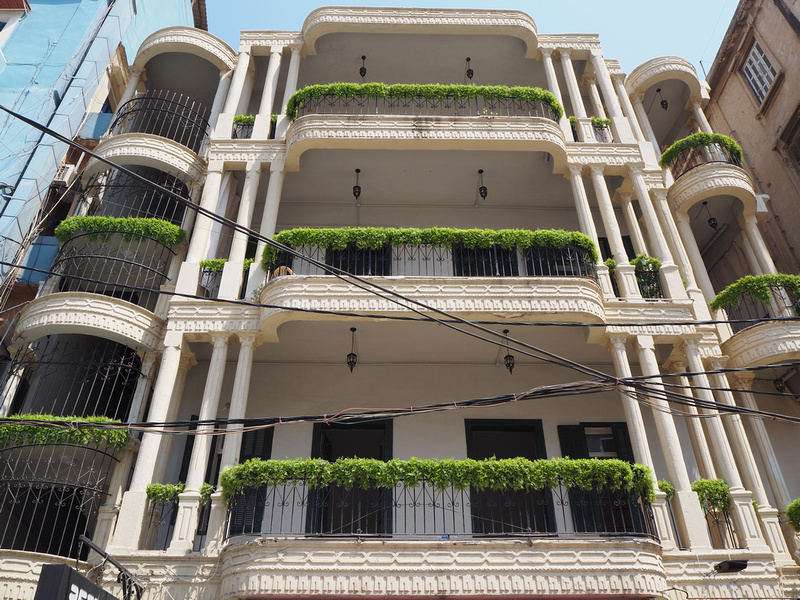 The world doesn’t need another luxury shoppers paradise. Beirut is somewhat of a liberal outpost in a conservative region. Being an artist and tech hub of the Eastern Mediterranean is far more appealing than being another city of malls. Throughout my wanders I found many cafes where I stopped to rest. And I haven’t even touched on the food, which is reason enough alone to visit Lebanon. 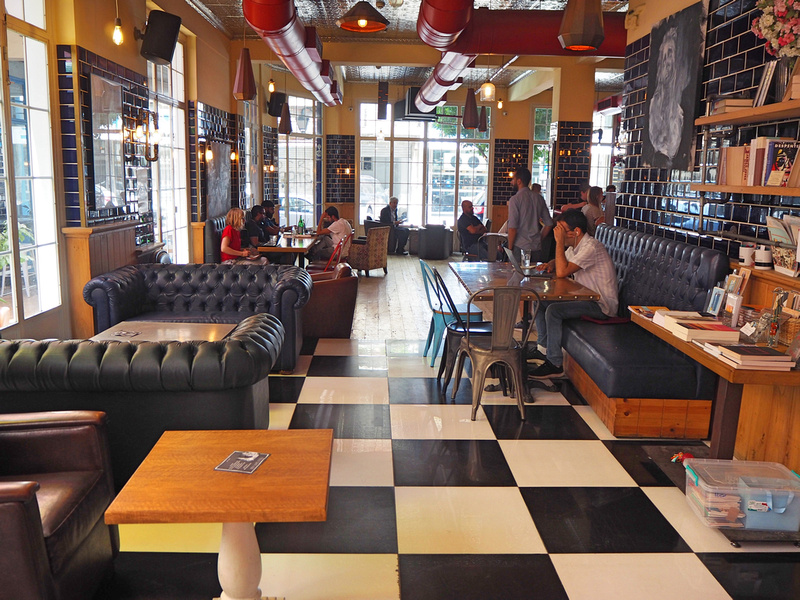 Its education institutions are another selling point, with the American University of Beirut being the number one ranked university in the Arab region. 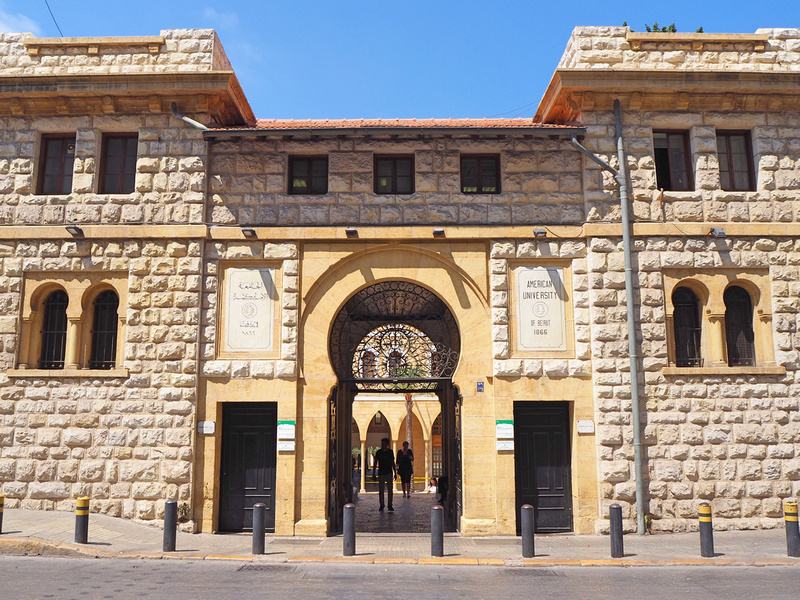 With such a short stay I didn’t visit as many neighbourhood areas as I would have liked. I was staying near Badaro Street, which has become one of the cool areas of the city with new bars and cafes lining the street. 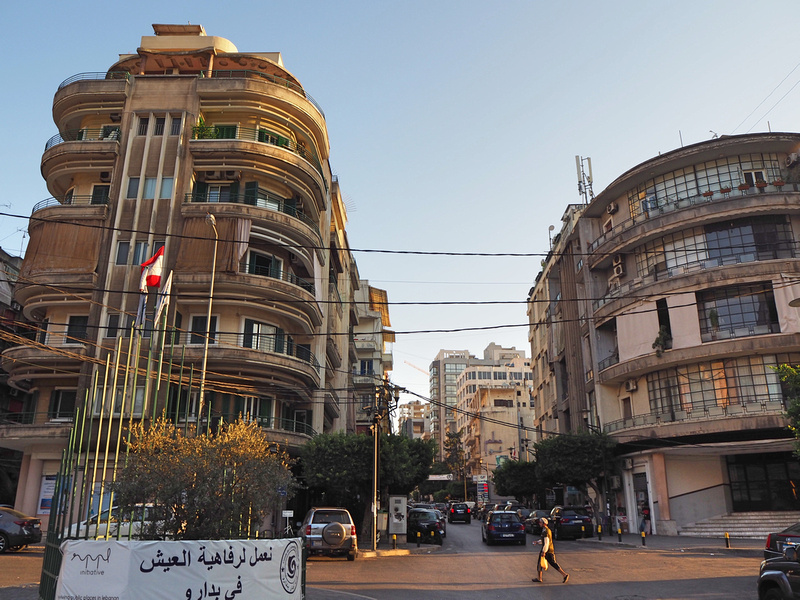 And I barely got to explore the Mediterranean seafront, so there is another reason to come back. 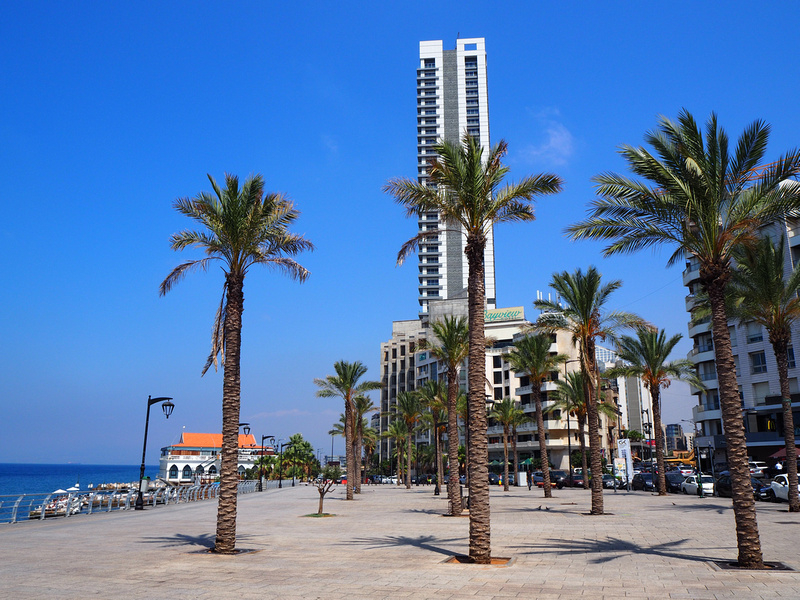