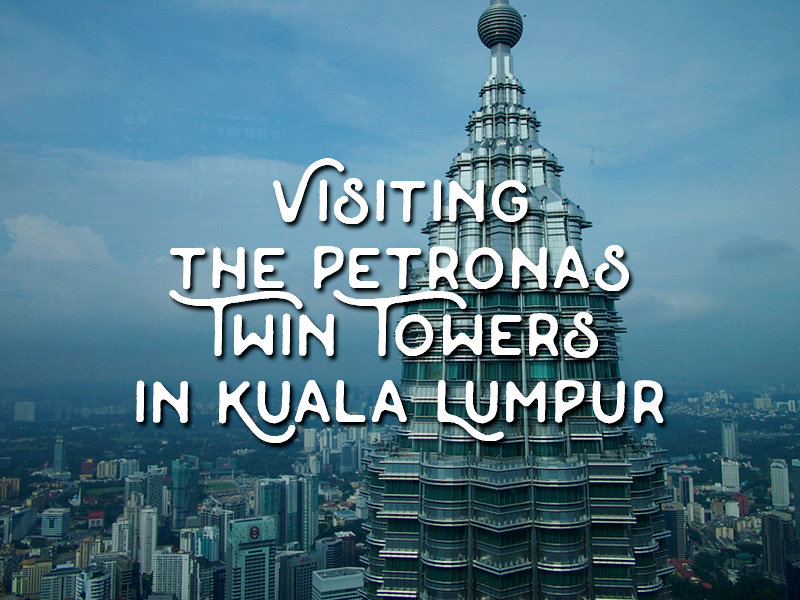 Even though I’ve visited Kuala Lumpur over 20 times in the last ten years, I had never been up the Petronas Twin Towers. My frequent visits fell into a familiar pattern of visit favourites restaurants and finding cafes to work from.

When my dad was visiting KL I took this as a good excuse to do some of the things that I haven’t done in KL. And on top of the list was a visit to the Petronas Twin Towers.

Here is how to buy tickets and what to expect.

I read that tickets sell out fast so we arrived 30 minutes before tickets went on sale at 8:30am. There was a small queue which I wasn’t worried about, but they turned out to be travel agents buying dozens of tickets at a time. 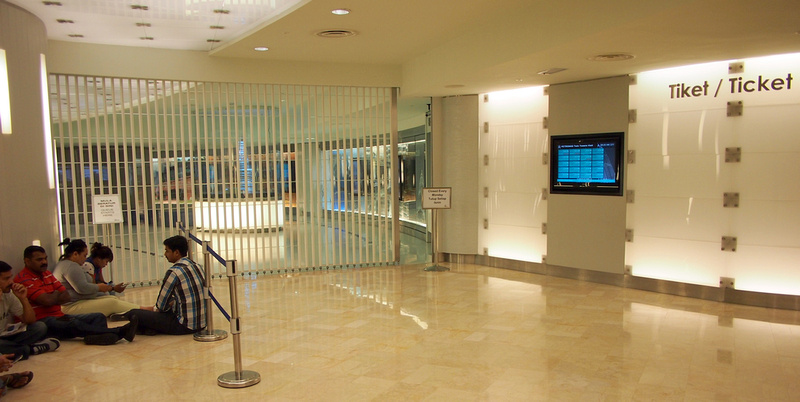 There are times you can choose throughout the day, with the sunset hour being the most popular. 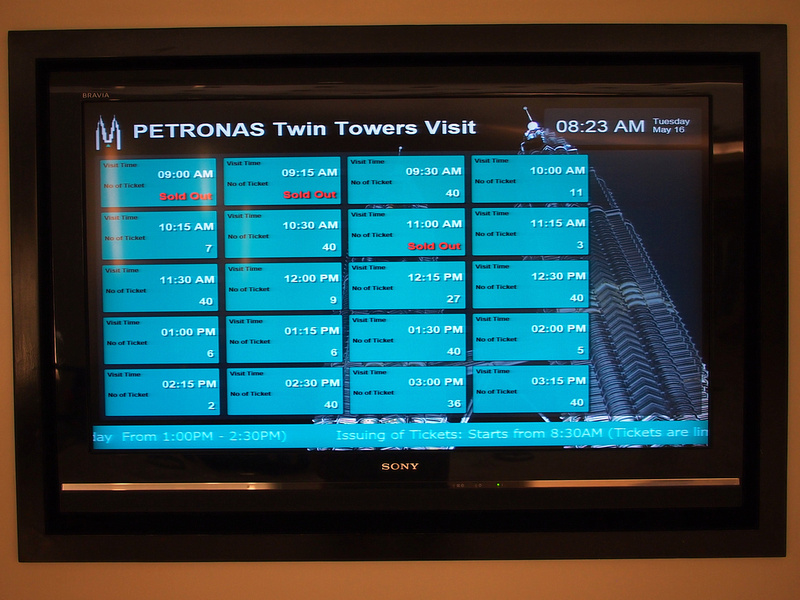 Tickets can be bought online at petronastwintowers.com.my. There are a limited amount of tickets available online, so if the day is sold out there may be tickets available at the ticket office. My ticket was 85 MYR ($19 USD). The viewing deck is closed on Mondays, and check the website for any holiday closures.

Luckily we got tickets with an hour, so we didn’t have to wait long. The mall at the base of the towers isn’t open until 10am, so we walked around the towers to kill time. 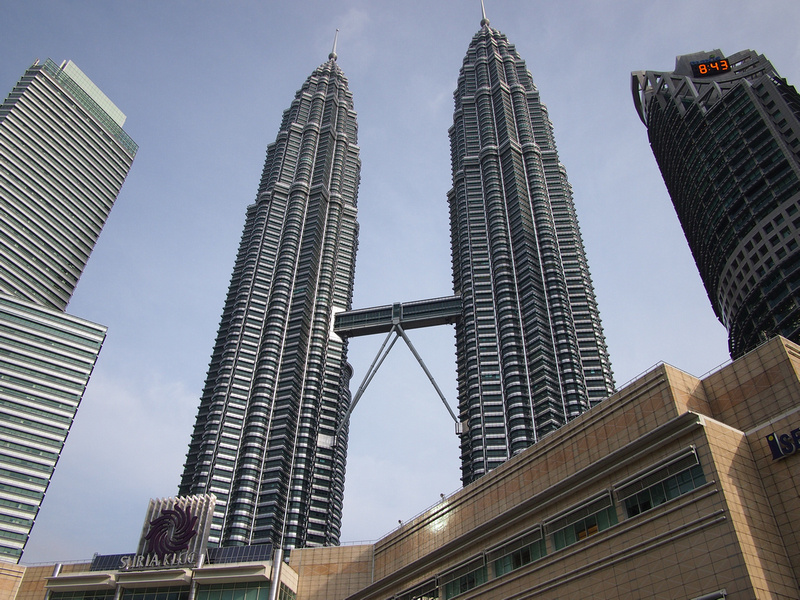 Unlike other towers I’ve visited, you don’t get to stay as long as you want. You are allocated in a group of 40 and taken up in that group. Initially I didn’t like this idea, but the timed group system worked well and you get enough time to see everything. 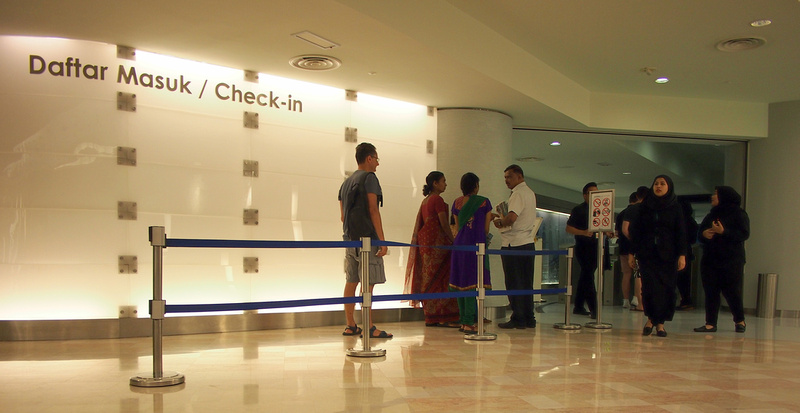 The first stop is to the sky bridge that connects the towers on the 41st and 42nd floors, 170 metres above ground. From here you already get a great view of the surrounding area of KL. The bridge appears to be only used by tourists for viewing, and not for tenants crossing into the other tower, so it is technically an architectural folly.

You get about 15 minutes here, which is more than enough time. 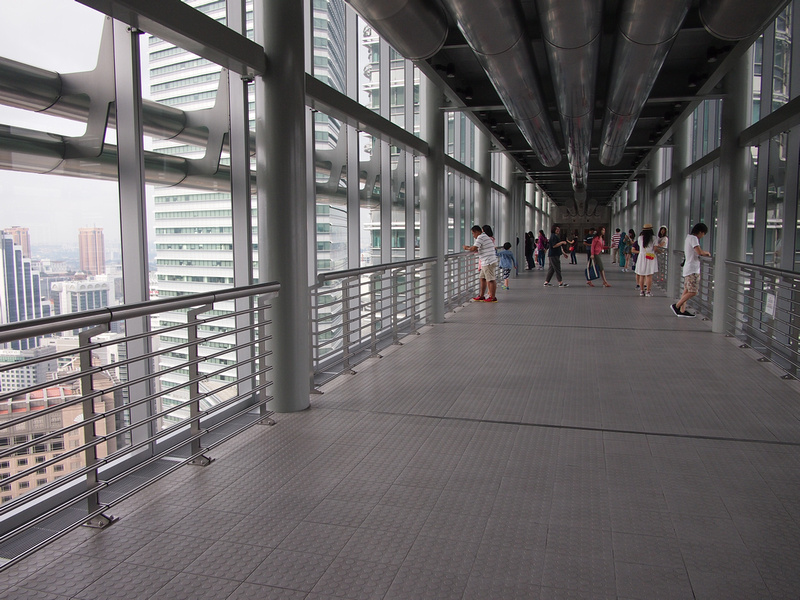 The next stop is to the main viewing deck, where the group is allocated time of about 30 minutes.

It was a bit cloudy when we visited but visibility was great. 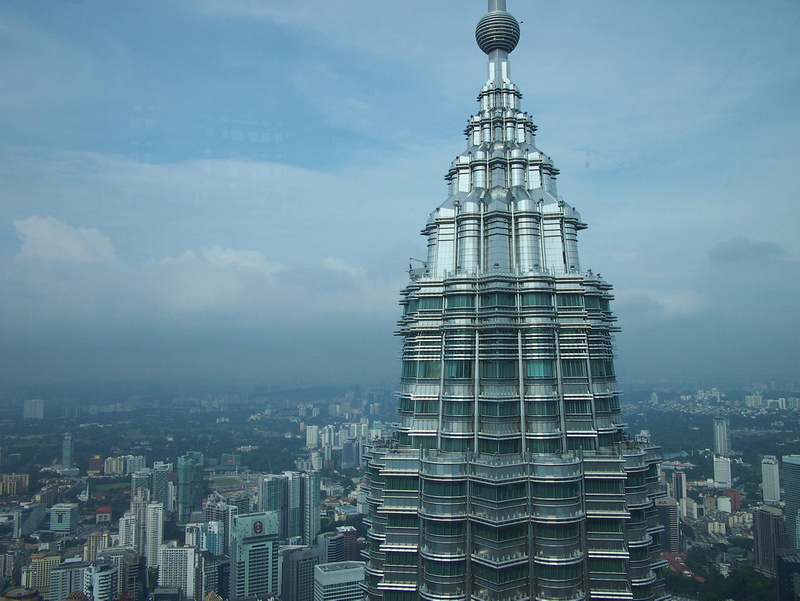 One thing I never thought about is that being a twin tower you not only getting a commanding view of the city, but also the mirror image of the tower you are in. Usually you don’t get the benefit of admiring the building. 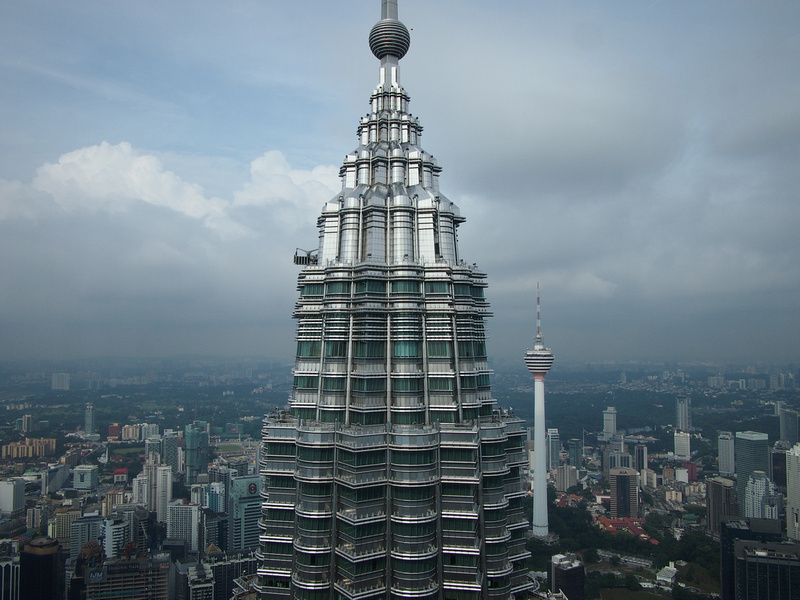 A window cleaning box on the other tower was being deployed when we visited. For some people that would be a dream job. I am not that person. 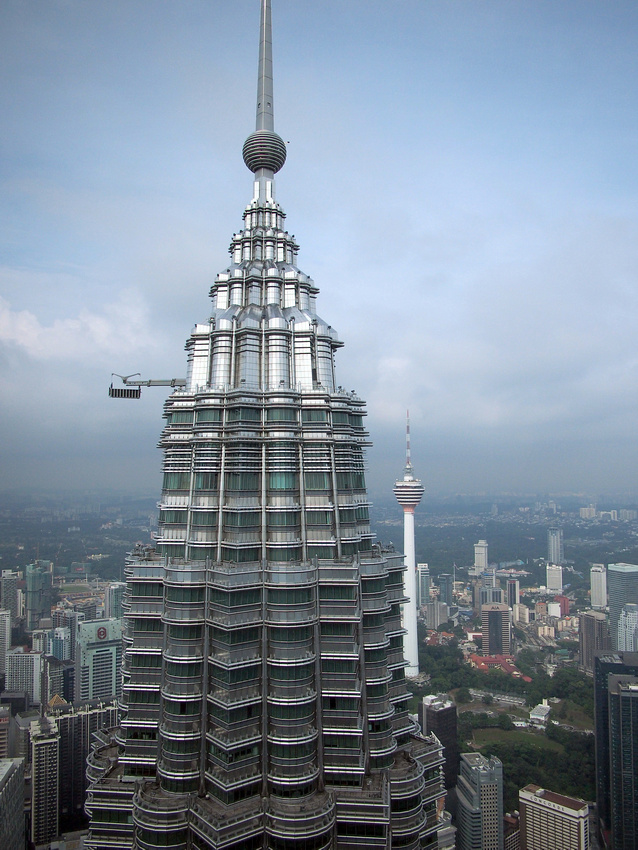 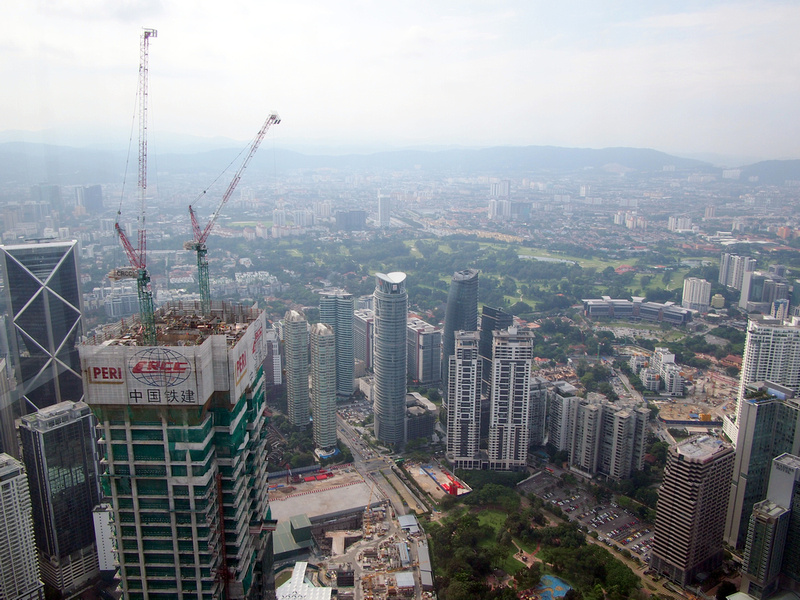 It’s not all high rise in KL though. On the other side you can clearly see Kampung Baru, which has somehow retained its Malay village feel despite being so close to the most expensive property in KL. 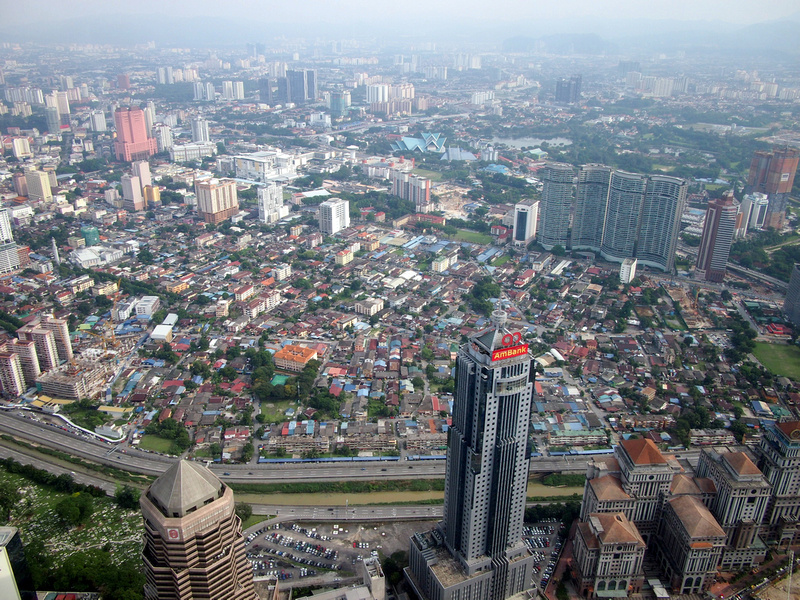 The observation deck also has information on the construction of the towers, and an interactive display which comes alive when you flash your ticket at the screen. 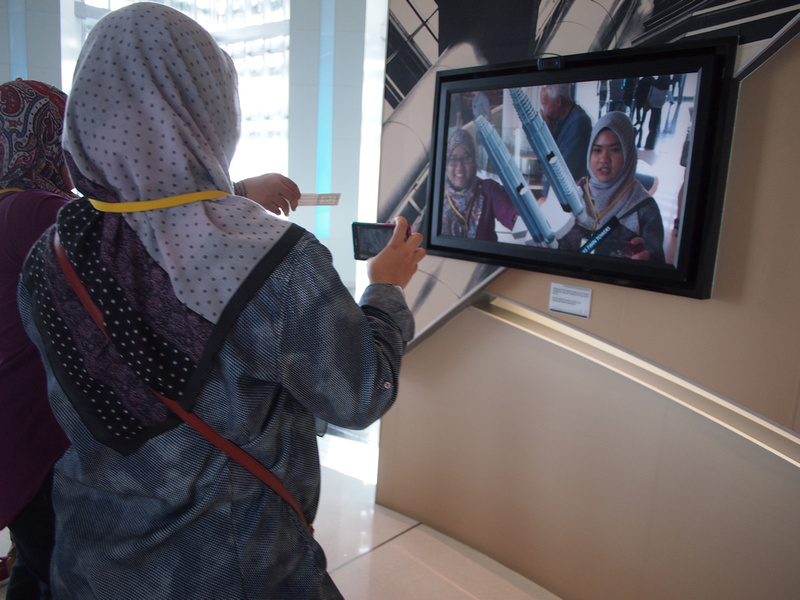 Kuala Lumpur Hotels: Search for hotels in KL, or choose which area to stay.

Flights to Kuala Lumpur: Compare the cheapest flights with Skyscanner.

12go – Train and Bus Travel: Book train and bus tickets to and from KL.

World Nomads covers your health and travel belongings. Find out more about getting travel insurance.