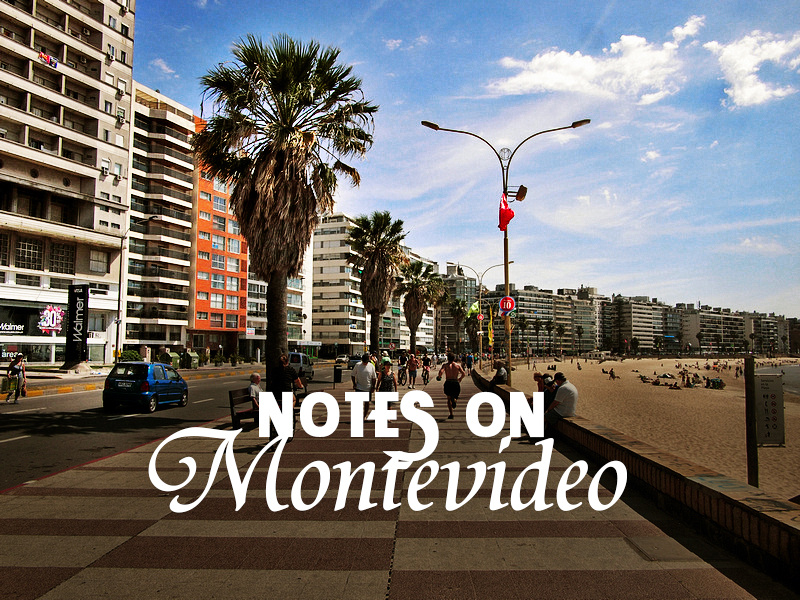 The second leg of my South American trip was to Montevideo, Uruguay. As part of this trip I was flown as a guest with Air France/KLM to a destination in their South American network. I opted to visit Buenos Aires.

Being so close to an international border though I couldn’t resist the temptation to visit a new country and explore what seems to be an underrated city. I saw that Air France also fly to Montevideo so that is where I finished my trip, flying back to London, via Paris.

Buenos Aires and Montevideo are separated by the Río de la Plata, and there are regular boat services that connect the neighbouring countries across the river (which is technically an estuary). From Buenos Aires I made my way to Colonia (in Uruguay) by boat, and then got the bus to Montevideo.

I spent a week in Uruguay, visiting Colonia, Punta del Este, and Montevideo. These are the notes of my wanders in Montevideo.

Not exactly to do with Montevideo, but I just wanted to acknowledge the fact that Uruguay has the coolest flag in the world. 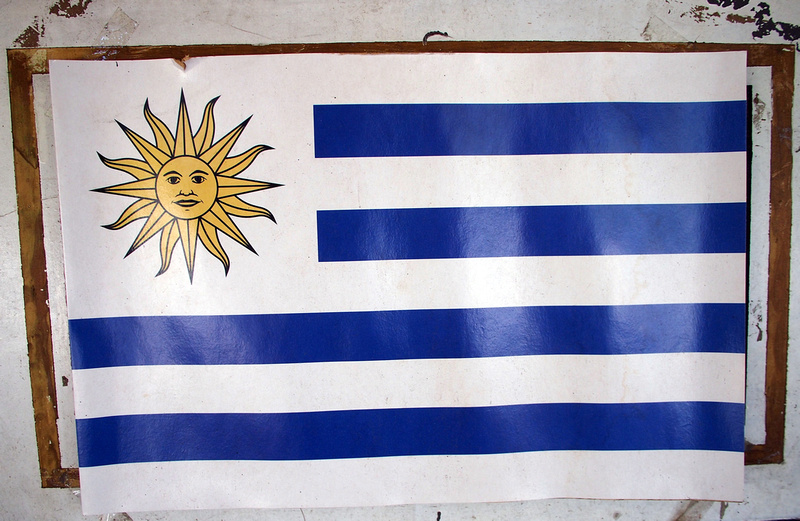 The Sol de Mayo (Sun of May) appears on the flag of both Argentina and Uruguay, though the Uruguayan sun is bolder and has a nicer face (IMHO).

Montevideo is similar to Buenos Aires (albeit on a much scaled-down version) in that it has a wealth of classic buildings from the late nineteenth and early twentieth century. The most historic buildings can be found in Ciudad Vieja (Old Town) and Centro. 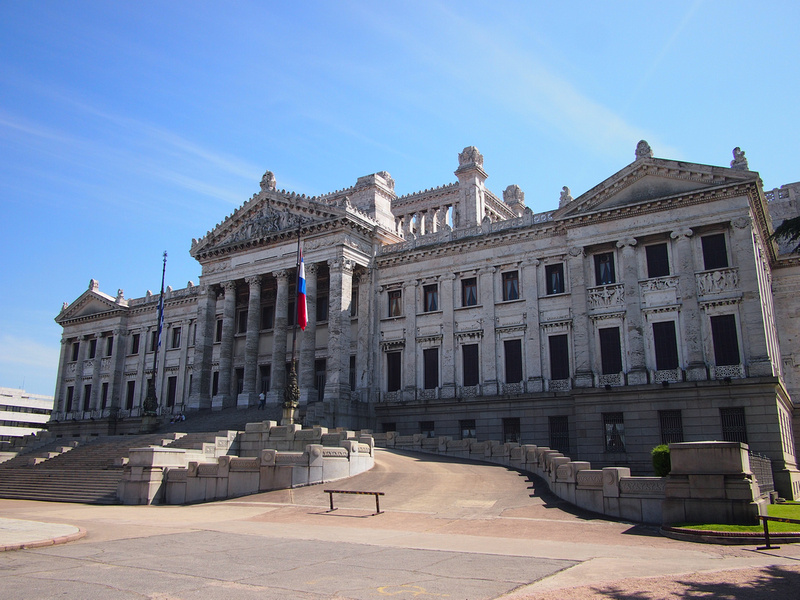 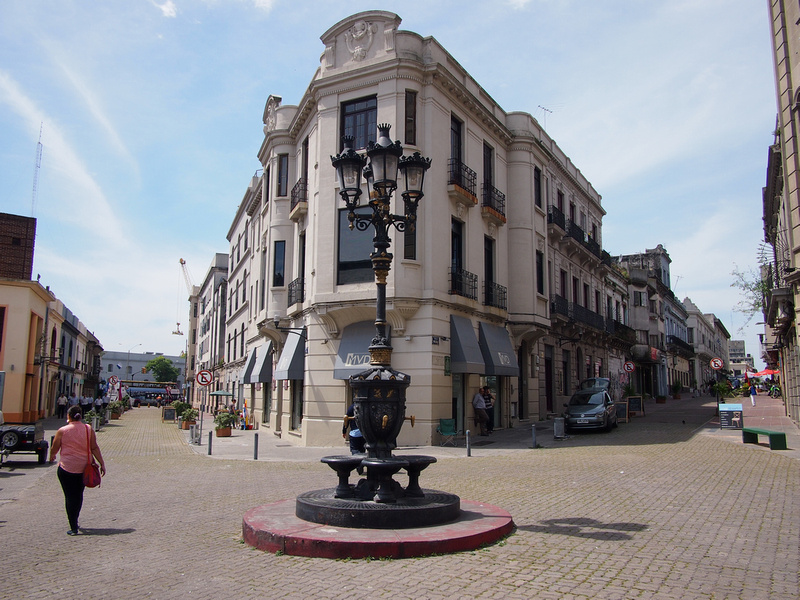 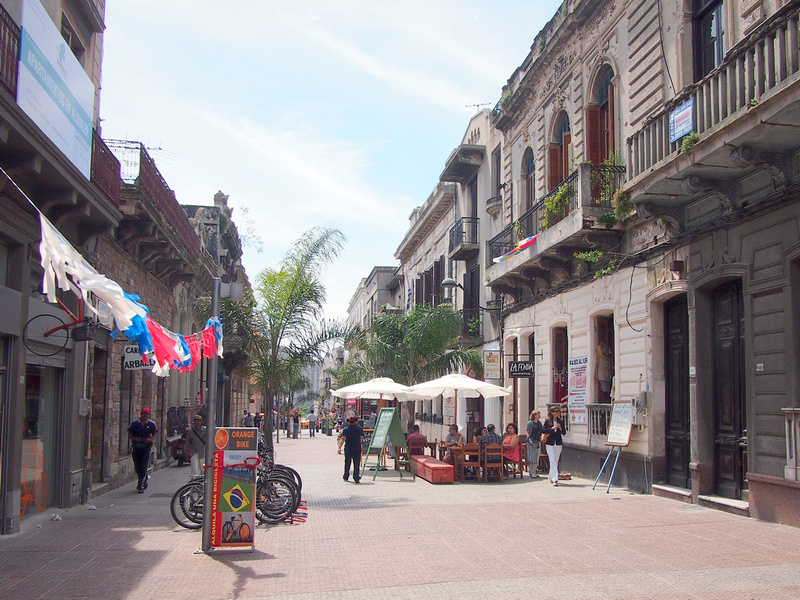 [Perez Castellano in the Old Town.] 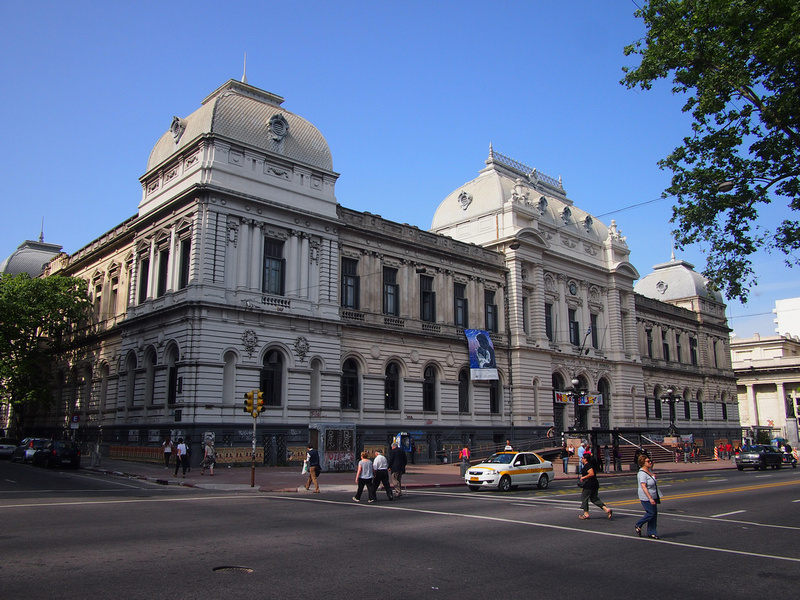 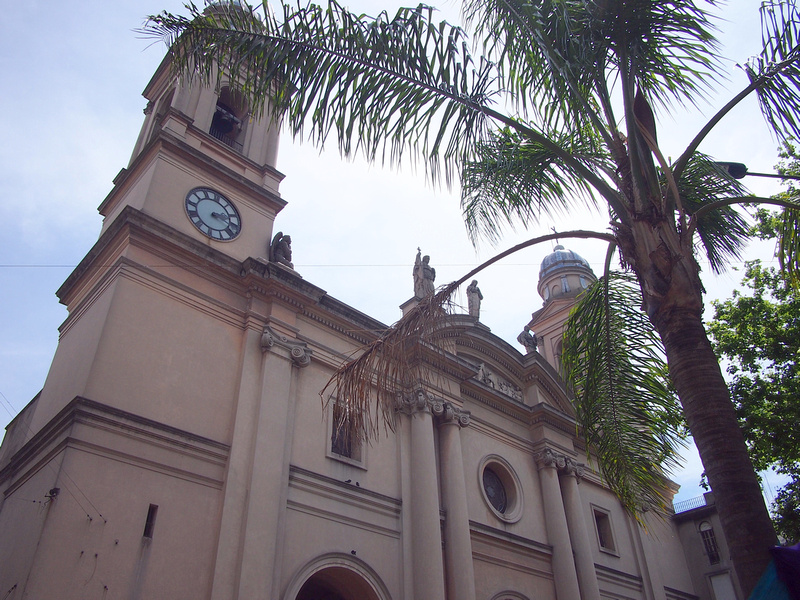 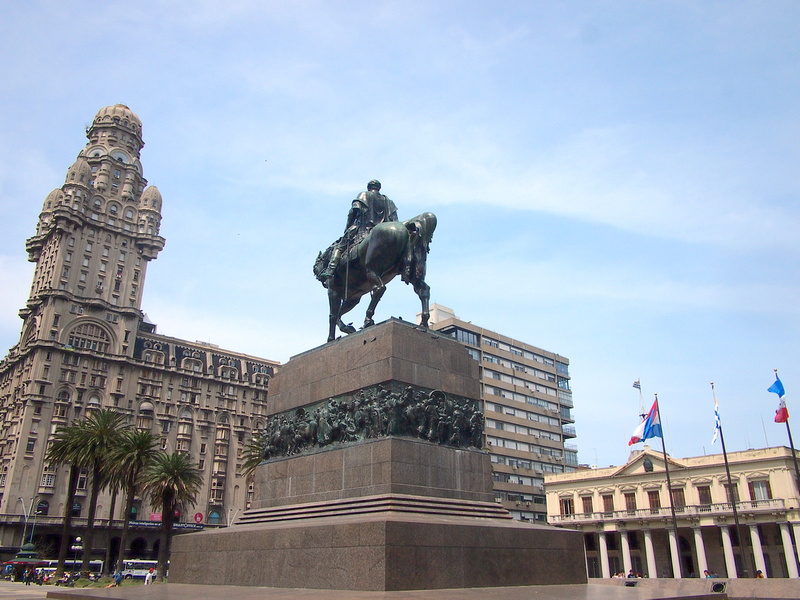 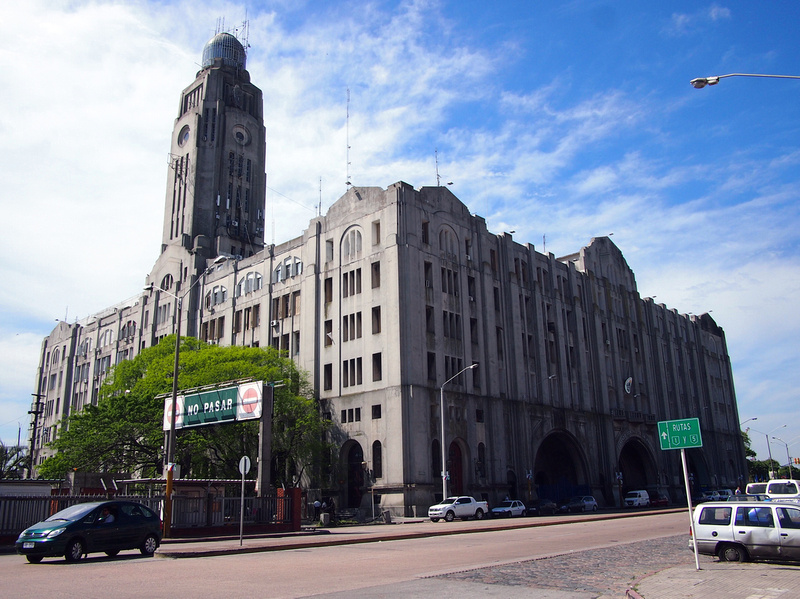 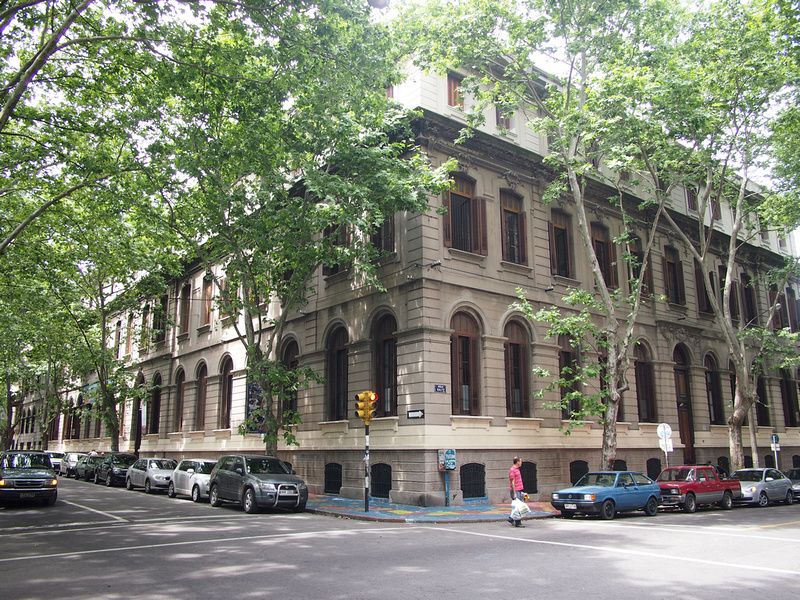 [A good mix of old buildings and leafy streets.]

The Rambla – The worlds greatest footpath?

While I was impressed with the stock of heritage architecture, the best built-environment feature of Montevideo is a footpath known as The Rambla. 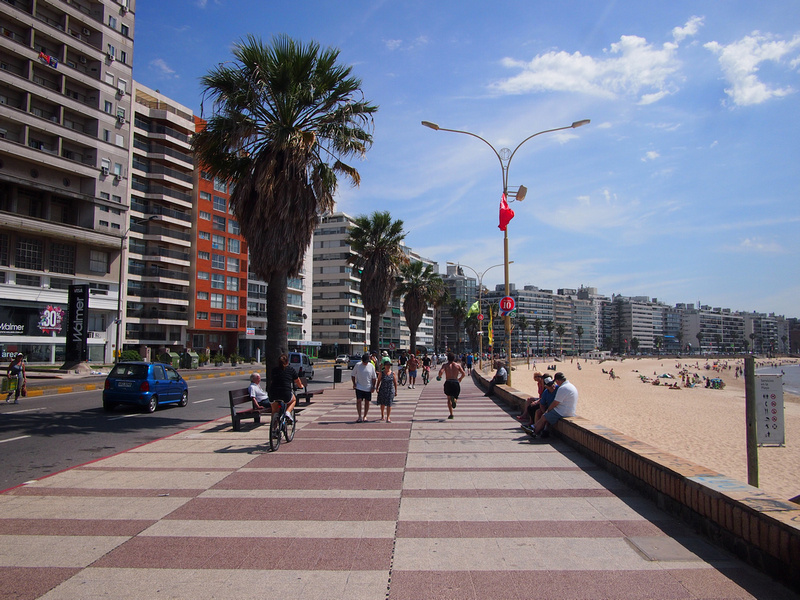 The Rambla of Montevideo is the pedestrian/cycling path that follows the shore of the Rio De La Plata for an unbroken 22kms. It is a town planning triumph in that building on the waterside of the path has been strictly regulated, thus giving an uninterrupted view for the whole path.

It was a pleasure to be able to walk for so long and not have to worry about crossing roads. There are beaches too, though the water is murky-brown Rio de la Plata water. (If you want to swim in clean ocean water go to Punta del Este). 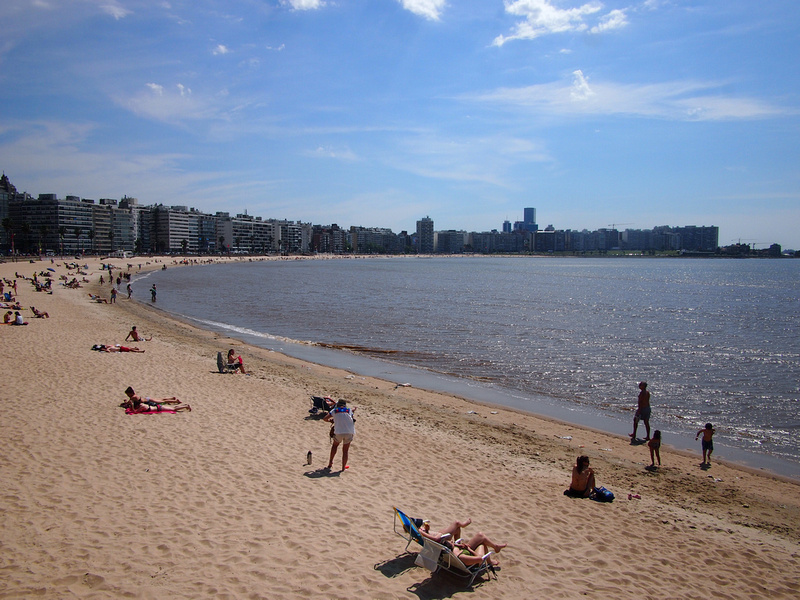 Ask Montevideanos what is their favourite part of the city and they will probably say somewhere along the Rambla. This is apparent when you walk along and the see the wall of apartment towers lining the road. 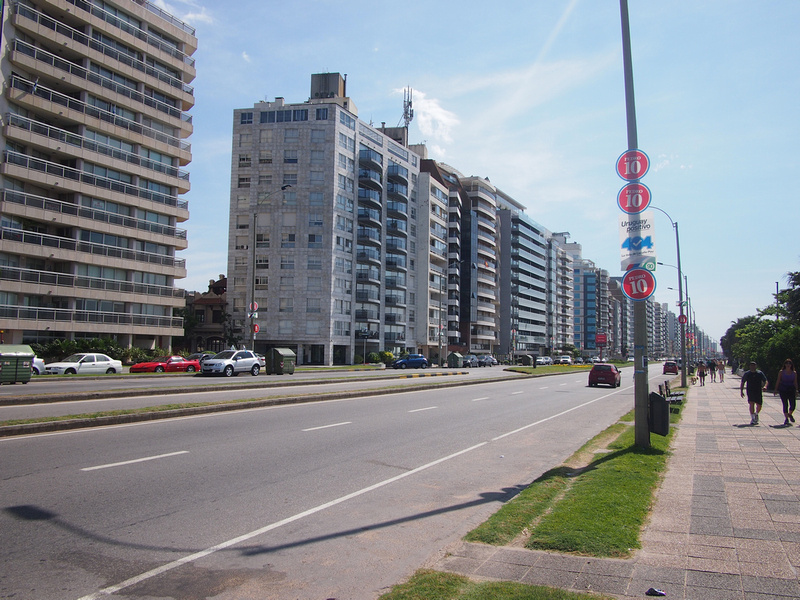 The Rambla is a much-loved feature of the city and it’s on the tentative list for UNESCO World Heritage listing.

I was happy enough to stay in the Centro area of town, but if I was staying for longer I would have chosen to find a place along here.

I stumbled into a few street markets during my wanders of the city, but the one to go to is the Tristán Narvaja flea market on Sunday. The market occupies the length of Tristán Narvaja and also spills into surrounding streets. 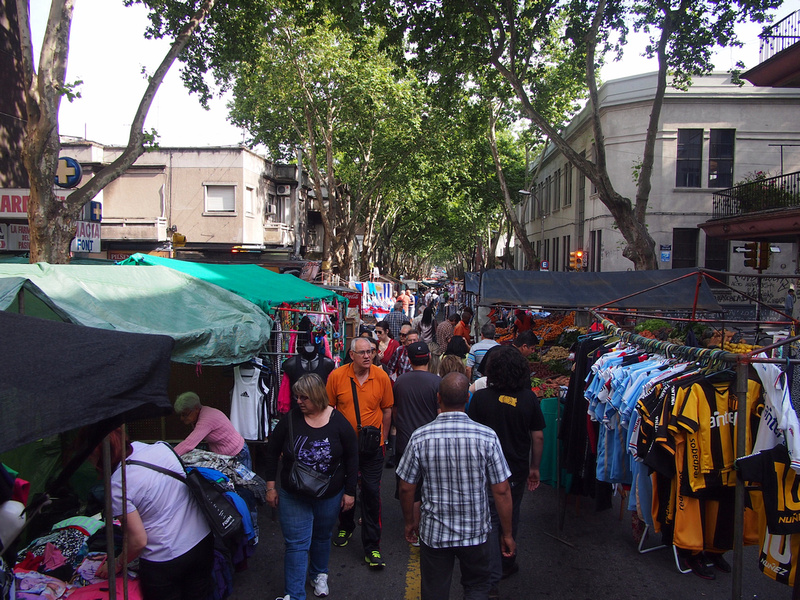 The market has the usual farmers market foods. 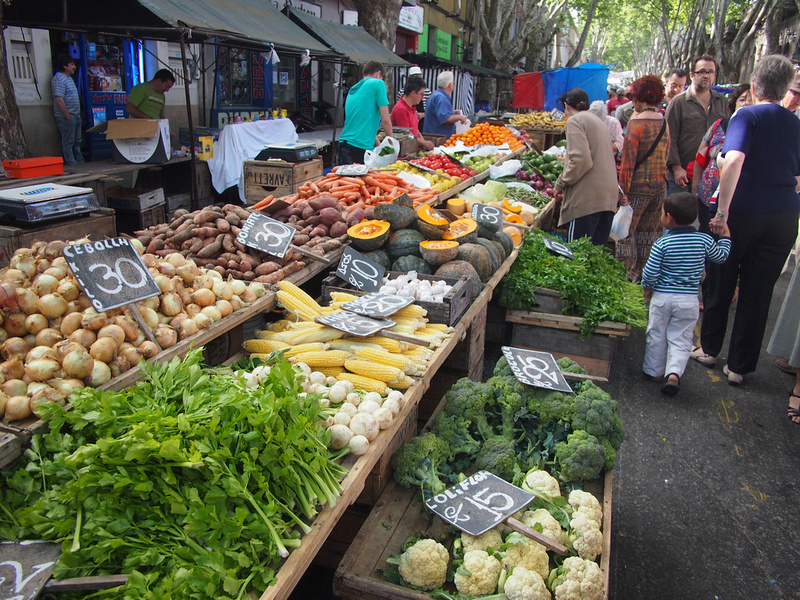 And truckloads of cheese. Yay! 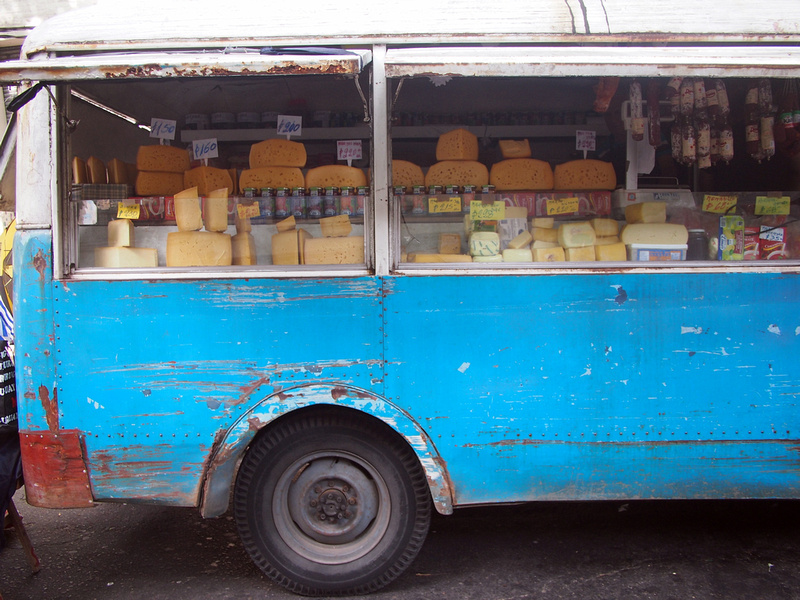 Along with the weekly grocery shopping there are clothing stalls, antiques, books, and other second hand items on sale here. 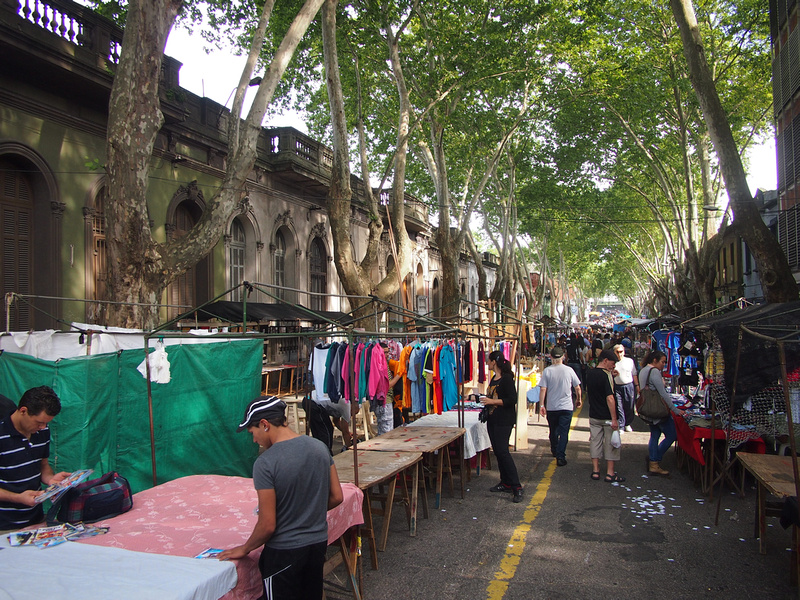 And no market in Uruguay would be complete without yerba mate paraphernalia. 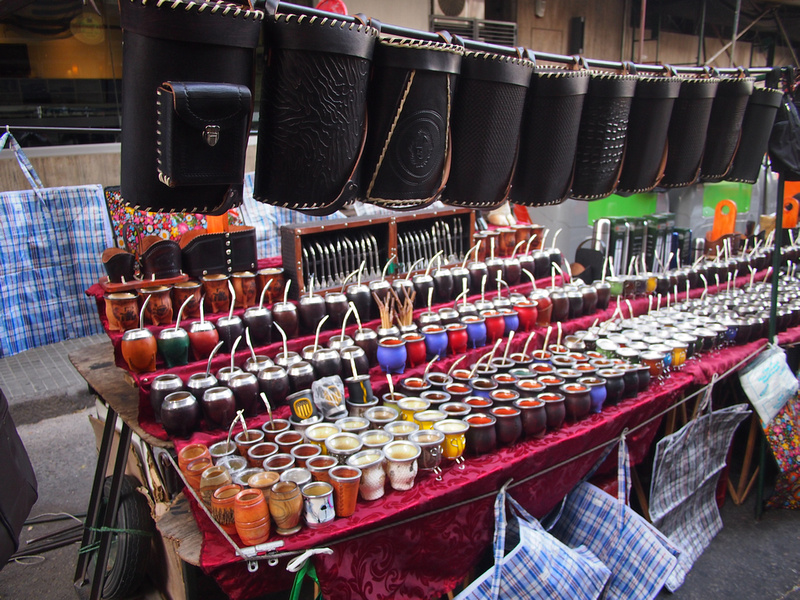 Uruguay might seem like a curious choice for inaugural host nation of the World Cup, but back in the day Uruguay was a football powerhouse. They had won gold at the 1924 and 1928 Olympics for football so they were awarded the right to host the first World Cup in 1930.

The stadium that hosted the World Cup (Estadio Centenario) still stands today and it looks pretty much like it did in 1930. There is a football museum which is open during the week, or you could time your visit to watch the local team (Peñarol) play there. 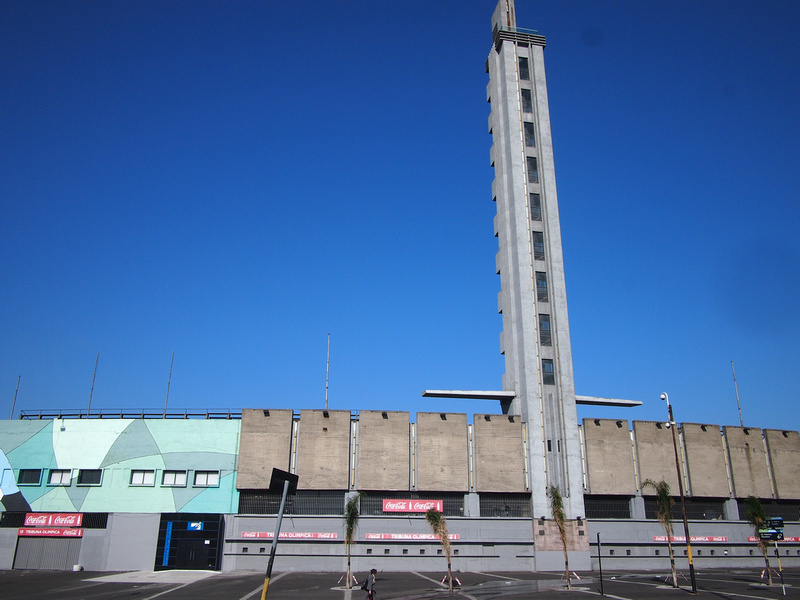 I went looking to see if there was a monument dedicated to the 1930 World Cup victory, but all I could find was this humble plaque on the stadium wall. 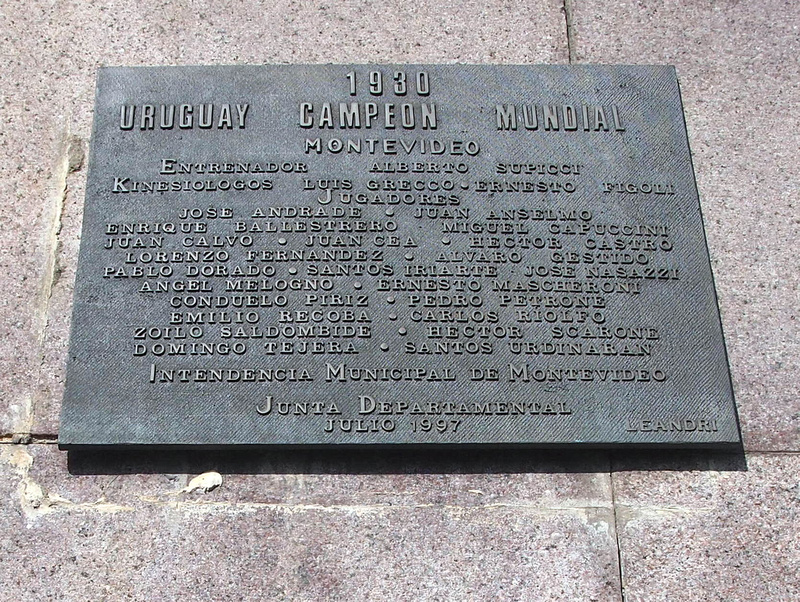 [A humble plaque for a humble nation.]

In the parkland around the stadium there is a more celebratory statue commemorating the 1950 World Cup win. 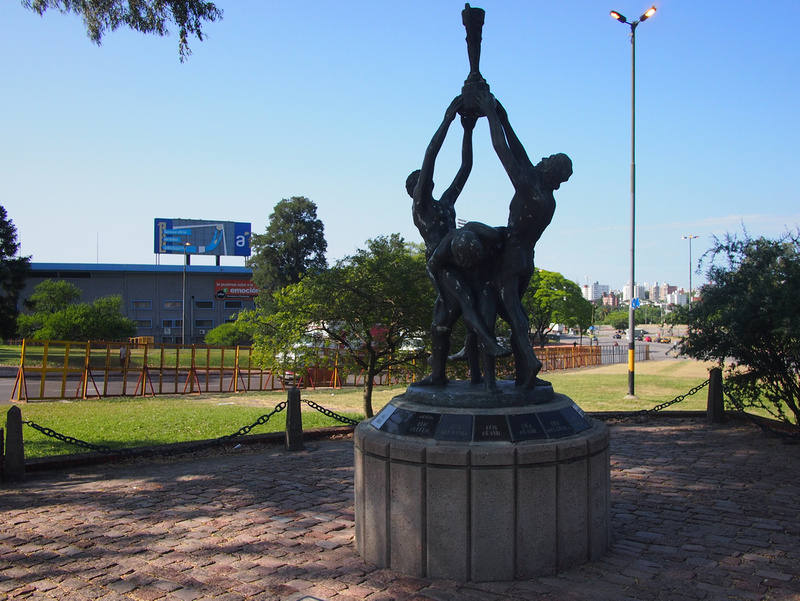 I didn’t know the history of the 1950 win so I looked it up. It turns out they didn’t just win – they beat Brazil in front of 200,000 Brazilians in a match Brazil was expected to win. It’s an epic story that ranks as one of the greatest sporting triumphs of all time. The backstory reads like a Hollywood movie. Please, read this before going any further (and read more on the Brazilian Tragedy and the 1950 World Cup here).

It makes me wonder why isn’t everyone wearing a Uruguay football shirt. So many people wear a Brazil football shirt who aren’t Brazilian or have no affiliation with Brazil. It’s like wearing a Manchester United shirt when you aren’t from Manchester.

Australia has faced Uruguay in World Cup playoffs in 2001 and 2005. Uruguay beat Australia in 2001 and then we beat them in the last round to qualify for the 2006 world cup. For that, Uruguay is my default South American team to support in international matches.

Everyone knows that Argentina is famous for steak, but did you know that the steaks from Uruguay are just as great? It turns out that Uruguayans aren’t a boastful lot (see World Cup, above) as the steaks aren’t as well known internationally (either that or their beef marketing board isn’t as organised as the Argentinian beef marketers).

I met up with a local and he said that the Uruguayan steaks are better than in Argentina (of course he would say that), but he also said it’s easier to find a consistently good steak in Argentina. To save me from wandering into a average parrilla (bbq restaurant) and leaving Uruguay with the taste of a bad steak in my mouth, he took me to one of best rated steak restaurants in Montevideo.

The steak was as good as I hoped it could be. 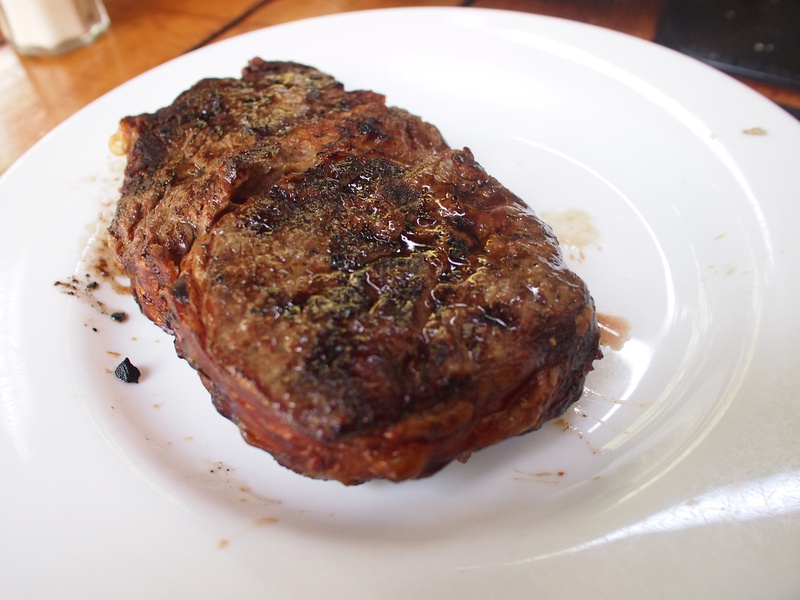 The surprise for me was the grilled cheese side dish. For someone who has been deprived of cheese for so long (Asia is not known for cheese) this was a perfect dish. It was like a pizza without the dough. Nothing but grilled cheesy goodness. 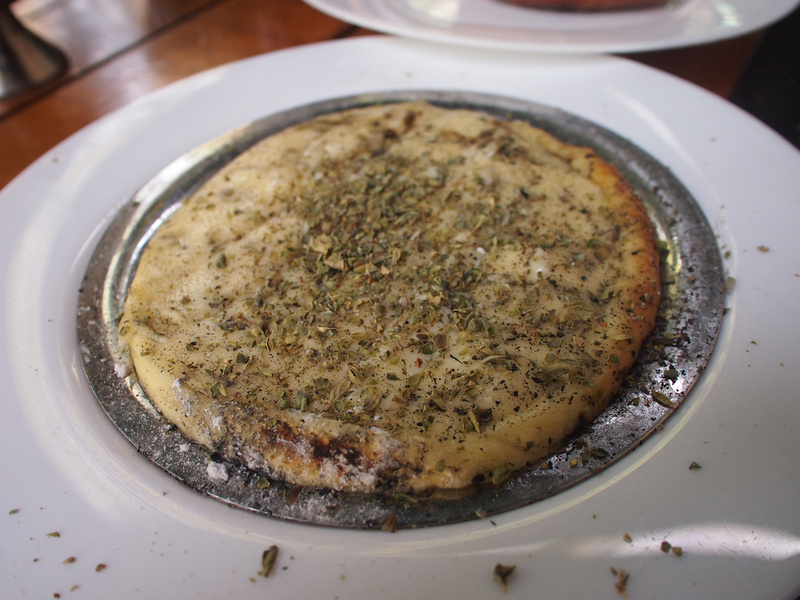 After lunch I went to give my compliments to the grillmaster. 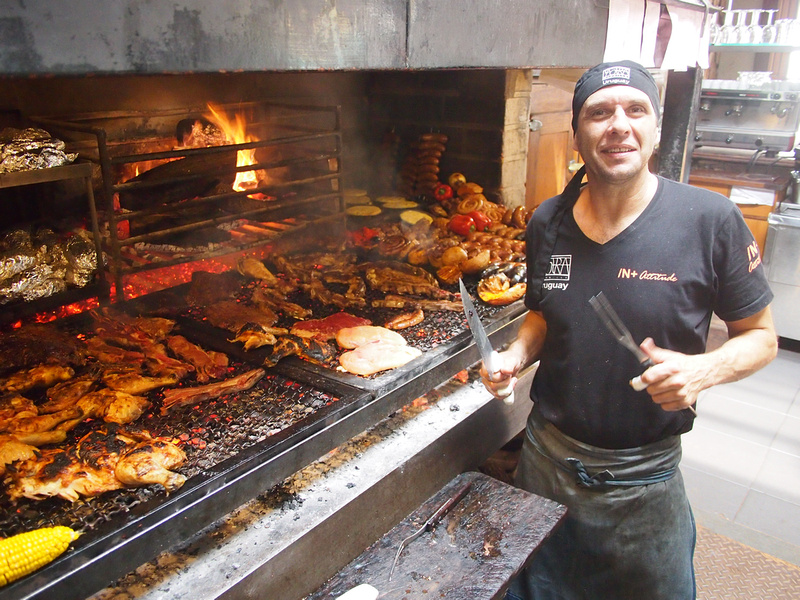 And he invited me behind the counter for a photo. 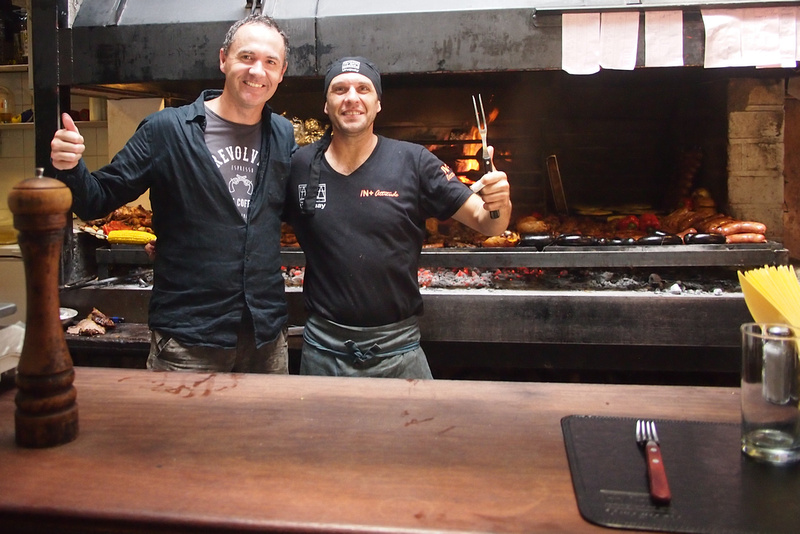 [With the parrilla griller]

I was asked who has the better steak: Argentina or Uruguay? Unfortunately my test samples were too small so you are asking the wrong person.

I ended my South American journey at the shiny new Carrasco International Airport in Montevideo. 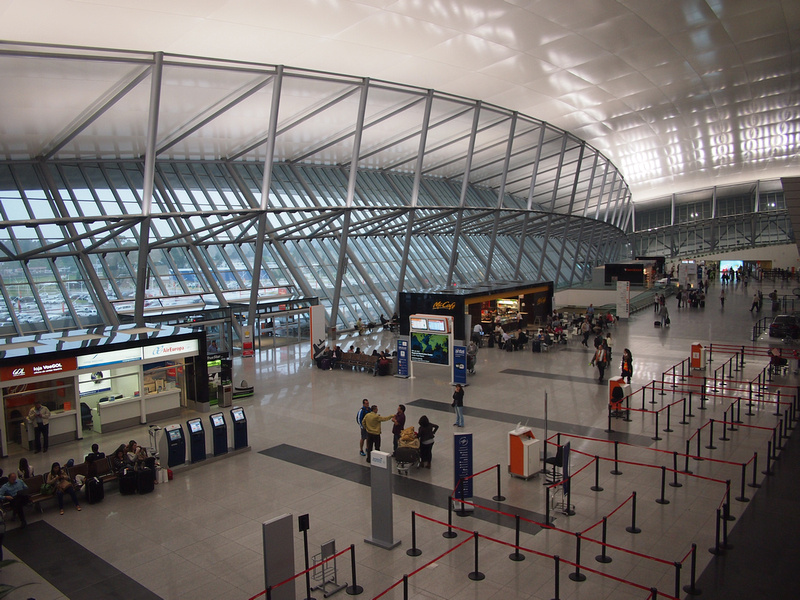 I departed from Montevideo with Air France which flies a triangular route from Paris – Montevideo – Buenos Aires – Paris. Air France/KLM are promoting cities in their South American network departing from UK airports. I was in London so that is how I ended up on this trip. From Montevideo and Buenos Aires there are flights to Paris and connecting to UK airports. For this trip though I elected to take a stop-over in Paris, which is where I will be writing about next.