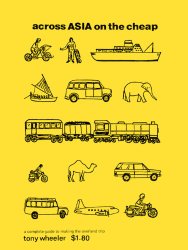 If you have travelled in Southeast Asia you will no doubt be familiar with Lonely Planet Southeast Asia on a shoestring, also known as “The Yellow Bible”.

Even if you are too cool for guidebooks you will have seen newbie backpackers clutching this nervously at bus stations, or seen a tattered copy at a guesthouse, or had a badly photocopied version offered to to by a street vendor.

In 2013 Lonely Planet turned 40, and to celebrate it re-released the book that started it all; Across Asia on the Cheap.

Across Asia on the Cheap was written after a trip across Asia that Lonely Planet founders (Terry and Maureen) made in 1972. The trip was the classic overland hippie trail that went from London to Sydney. The guide covers the the bulk of the trail from Istanbul to Indonesia and Portuguese Timor (now East Timor), the jumping off point to Australia.

It’s a fascinating read to see how travel in Asia has changed over the last 40 years. The prices have of course changed (though some items are still almost the same), and where you could go has changed as well. When this was written you could travel freely in Afghanistan while North Vietnam was strictly off limits.

Here are some highlights of the book.

The guidebook is for the long Asian section of the hippie trial but it mentions that you can get a “freak bus” service from London to Istanbul for about $30. Yes, it sets the scene early that this book is by hippies, for hippies.

It also alludes early on that the going is cheap, with “Singapore and Bangkok…the only places between Australia and Europe where a couple would have to spend more than a dollar a night for a reasonable hotel room.”

The Wheelers said they travelled for about 5 and a half months with $1200USD between them. That works out to about $109 each per month.

On of the biggest standouts of the guide is the section on dope. Can you imagine a mainstream guide book doing that today?! Of course Lonely Planet wasn’t a mainstream guidebook at the time; it was a home made guide stapled together on the Wheelers kitchen table.

The guide to dope isn’t written like “you shouldn’t do dope but if you want it here it is”. No, the first Lonely Planet guidebook is celebrating the fact that you can get stoned for most of the way from London to Sydney. We live in different times.

Nepal rates highly as a place to get dope, with government hash shops apparently doing great business, and in Afghanistan “you can stoned just taking a deep breath in the streets.” Afghanistan is described as the “pot heads paradise.” What would a 20 year old make of this, who has only known Afghanistan in their lifetime as a place of war and religious extremism? It seems unbelievable that we are talking of the same place.

It also mentions that “grass is easily obtainable in Indonesia”. Of course these days you wouldn’t dare touch the stuff in Indonesia, as Aussies in Bali can attest.

There is a word of warning at least for Turkey and Iran, which recommends staying clear if you are looking for drugs. And in Singapore there are urine tests for selected individuals, so the party comes to a brief hiatus when you reach the Lion City.

And as for Australia, “the customs are definitely the most paranoid in the world”, so not much has changed there.

While the internet has become such a complete part of our lives, it wasn’t that long ago that it wasn’t even a thing. Hell, I’m not that old, yet I recall travel without internet and communicating to my friends back home by writing words on paper that you would then stick in an envelope and send via the postal system. They called this a letter.

This guide has a section on how to send and receive letters. One way of receiving letters being poste restante, where someone can send a letter to a designated post office and the PO will hold your letter for a few cents. You can still do this now but it is a dying tradition.

While the overland transportation prices are cheap, one thing that stands out is how expensive air travel was 40 years ago. Or should I be saying how cheap air travel is today? Here is a sample of the full prices fares listed in the guide:

Today I can fly from Australia to Southeast Australia for the same price, or even cheaper, on airlines like AirAsia, Jetstar, and Scoot.

Not only was flying expensive back then, it was also not as accessible as it is today.

For example the cheapest option to get from Australia to Indonesia at the time was a flight from Darwin to Bali with the airline Merpati. However there was only one flight a week and it was usually booked out three months in advance.

On Bali it says to “go soon though – the charm of Bali shows every indication of being rapidly eroded by tourism.” Every year since every traveller who has visited Bali has said the exact same thing, so you could say that nothing has changed there.

People today talk about Singapore being a sterile and authoritarian state, but it sounds like a liberal haven compared to 40 years ago:

“Singapore wants tourists who arrive by air, clutching Samsonite luggage and handfuls of dollars. Most important they’ve got to have short hair…This unfortunate attitude seems to be contagious in South East Asia, so hassle-avoidance means a haircut – or a short hair wig which some people find very successful.”

“A groovy place once you’ve got in, everything from the incredible Bugis Street transvestites to cut price cameras, crazy Tiger Balm gardens to those wham bang Chinese movies.”

Bangkok is described as “one of the more expensive cities you will pass through”, and as an example one cheap hotel is listed at 30 Baht ($1USD) for a double. Hahaha. There is also a listing for the Starlight Hotel on Sukhumvit Soi 22, which is an air-conditioned room with private bathroom for 40 Baht. Sounds good to me.

In the sixties and early seventies Bangkok was the R&R playground for American troops visiting from Vietnam, so the prices were probably inflated due to the city being awash with USD. This guide was written near the end of the war and observes that R&R business was disappearing by then, but “Bangkok has developed some heavy breeds of VD.”

For free accommodation you could stay in Buddhist Wats “so long as you’re willing to let the monks practice their English on you.” Noticeably absent from the Thailand section is Khao San Rd, which is the current backpacker street in Bangkok.

“Due to the continuing effects of the American charade in South East Asia travel to other South East Asian countries is either difficult, not recommended or impossible.”

It says that you can travel from Bangkok to Saigon by air for $86USD but the “South Vietnamese government is very communist nervous and may refuse admission if you’ve visited the “wrong” countries.”

Related to the expense of air travel mentioned previously, I took a flight from Bangkok to Ho Chi Minh City (Saigon) this year for $75USD.

Meanwhile the guidebook dreams wistfully of visiting Cambodia, saying “Siem Reap is the town from which Angkor is usually visited, here you could hire push bikes for visiting the ruins. Maybe next year…” No one could have seen the hell that was to be released two years later when the Khmer Rouge swept to power.

Parts of Laos was considered visitable but it was “having an anti-hippy drive so look good.” It also points out that French is a widely spoken second language, which is not true today.

Across Asia on the Cheap is available on Amazon Kindle.