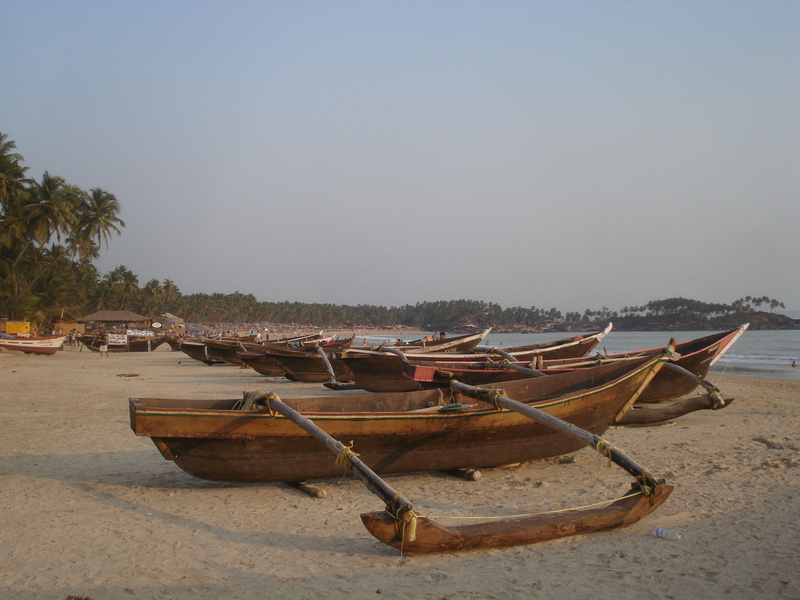 Goa is a small state on the west coast of India. It is often referred to as if it is a place. This former Portuguese colony was once one of the happening places on the overland hippy trail in the 1970’s, and ever since then every hippy worth their salt will tell you that it is not what it used to be.

The previous week in Mumbai every one I had met who has been there was giving me their differing opinions on why this beach is better than that beach. In the end I did not decide which beach to go to until I got to Goa.

I got the overnight train from Mumbai to Margao in central Goa. The booking office at the train station in Mumbai looked like half of Mumbai was in there trying to book a ticket. Fortunately there is a foreigners booking office and there was only one person in the queue.

On the train I was in a compartment with a couple of hippies. They were on their way to a beach so quintessentially Goan that it wasn’t even in Goa, but just south of the border in the state of Karnataka. The place they were going to was Gokarna, a popular place for Hindu pilgrims where few tourists go to, so I was told.

There was a young Canadian in the train as well and he said he was going to Palolem.

“Ahh yes, Palolem”, the hippies said, “It was pretty good a few years ago, but it has gotten a bit busy since”. The Canadian was a fellow Goa virgin and we both agreed that any beach in Goa was still going to be more exotic than the beaches offered in our home towns, so Palolem it was for us.

Palolem was everything I hoped it would be. With no personal reference of what it used to be like I was happy here with its arching sandy beach and shoreline forested with coconut trees. Bamboo beach shacks hardly seemed like an overdeveloped beach compared developed beaches I am familiar with. Along the beach are Goan fishing boats as well the friendly stray dogs and cows. I found out that Palolem is the beach that Matt Damon is running on in the start of The Bourne Supremacy, which I had just watched just a few weeks before arriving. Upon finding this out I had to emulate Jason Bourne and run along the beach as well.

Cows on the beach and streets of Palolem

I have been in India for one week and I’m still taking photos of every cow that walks by. It’s not like I’ve never seen a cow before, but I’m finding seeing cows walking around in urban areas novel. Away from the beach resorts of Goa is the town of Old Goa. Old Goa was the capital of Goa in the time of Portuguese rule and it was said to be as grand as Lisbon. You would never guess that looking at it today. The city was abandoned in 1843 and the capital moved to Panaji, the present day capital of Goa.

All that remains today is a collection of churches and cathedrals. What is striking about Old Goa is all the open space between these historic buildings, which you do not see in other Indian cities. A highlight of Old Goa is the Basilica of Bom Jesus, which houses the well preserved remains of St Francis Xavier, who died in 1552 on the Island of Sancian, off the coast of China.

For all your safari suit needs Safari Suits are still a thing in Panaji. Anjuna is most famous for its giant wednesday flea market, so if you are travelling around Goa it’s good if you can time your itinerary to be here on Wednesday. Bring cash and your bargaining skills. Anjuna itself is a small village with accommodation along the beach and spread out behind along the rural back lanes. A sign to make you think twice about the short cut across the grass. Walk south from Anjuna (or just get an autorickshaw) a few kilometres along a cliff and through a bush path and you will arrive at Baga and Calangute beach. These two beach resorts are indiscernible as sunbeds are lined up for miles on a huge stretch of sandy beach.

This is where most of the package deal holiday makers stay. Mostly Northern Europeans here thawing out from frozen winters in a location more exotic than the usual Spanish resorts. Plenty of St George beach towels reserving sunbeds to be found here. You know you are in English territory when you see a bar called Rovers Return (the pub in British soapie Coronation Street). While Goa is not quite the Costa del Sol, there is a large British expat and travel community here.