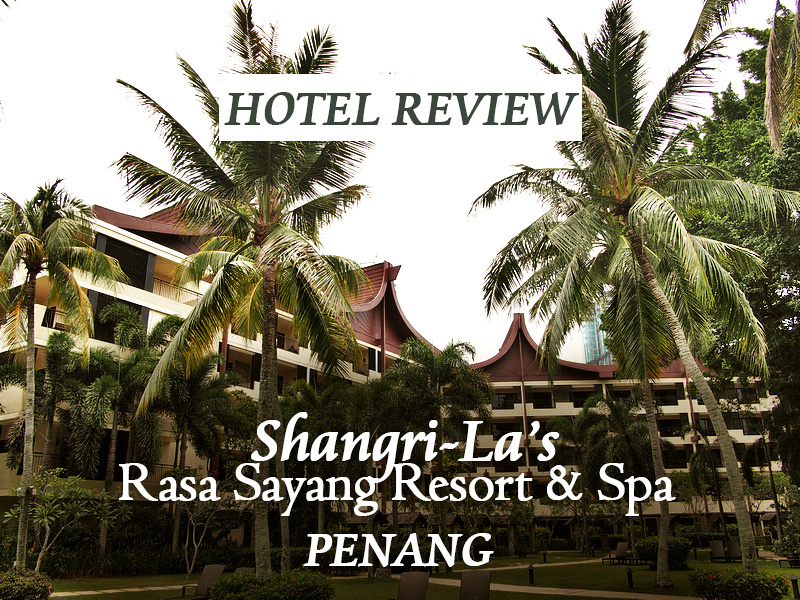 I stayed at the Shangri-La’s Rasa Sayang Resort & Spa Penang as a guest of the hotel. 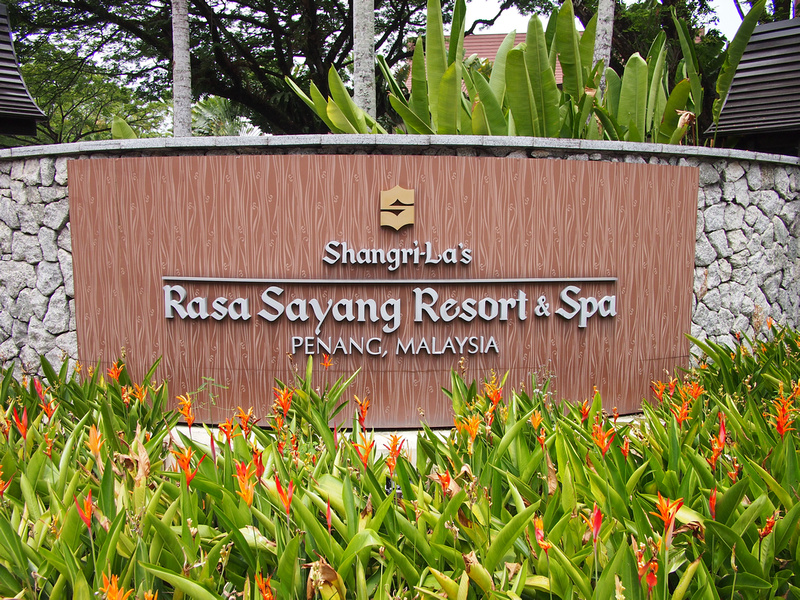 I had previously reviewed the Shangri-La Kuala Lumpur which sets a high standard of luxury, but the Penang property is set in an even more luxurious location.

The Rasa Sayang Resort & Spa is on Batu Ferringhi Beach in the northwest of Penang Island. If you are coming from Georgetown the hotel complex is the first property on the beach and you can’t miss it as it is a huge property. The hotel is set on 12 hectares of gardens that face the beach. 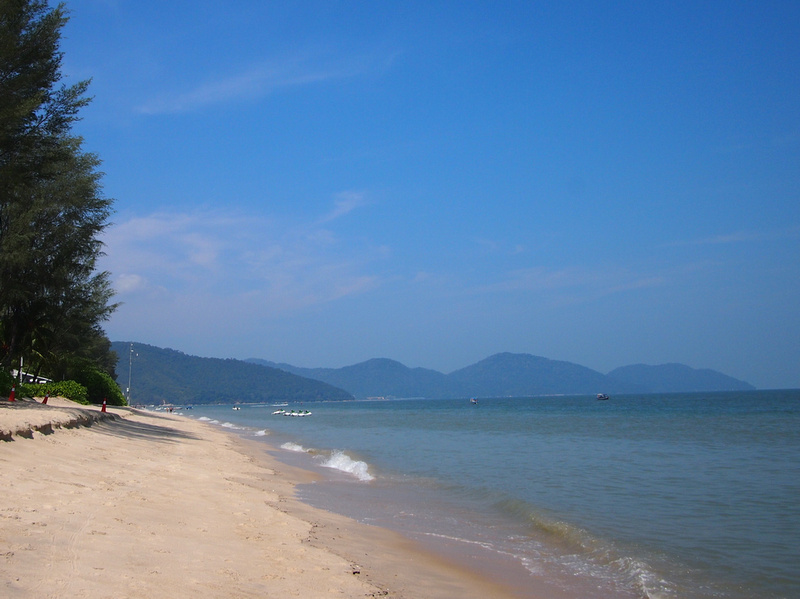 The resort has two wings that are connected by a walkway with the large garden in between; The Garden wing and the Rasa wing. 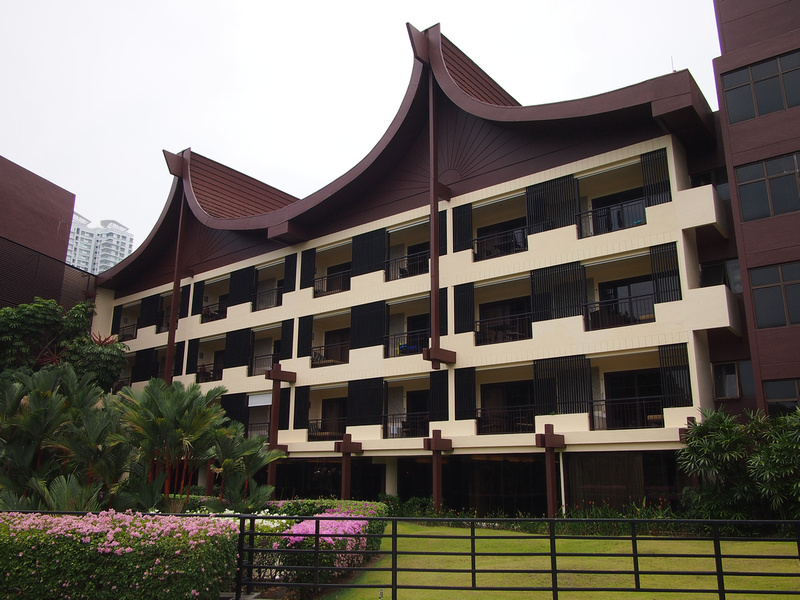 I was allocated a room in the Rasa wing with a view overlooking the gardens. 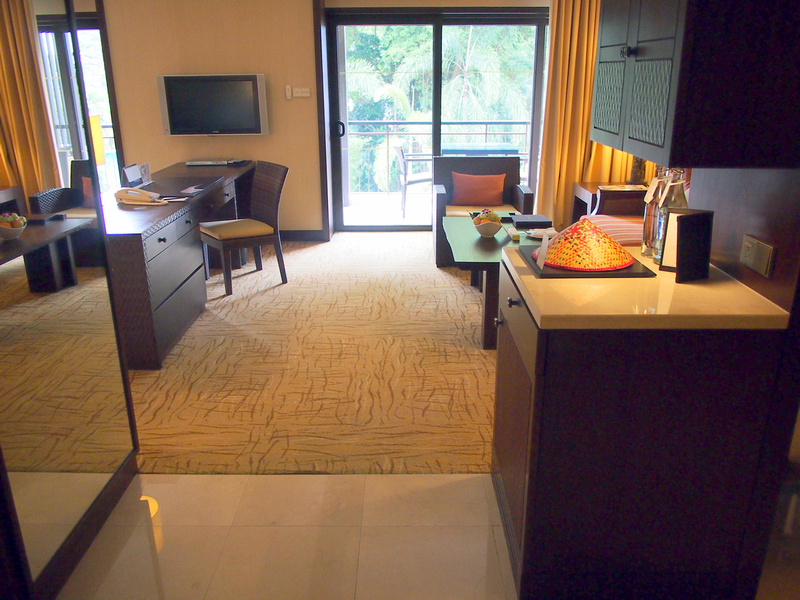 Near the entrance to the room was a colourful conical hat, which turns out to be a tudung saji. 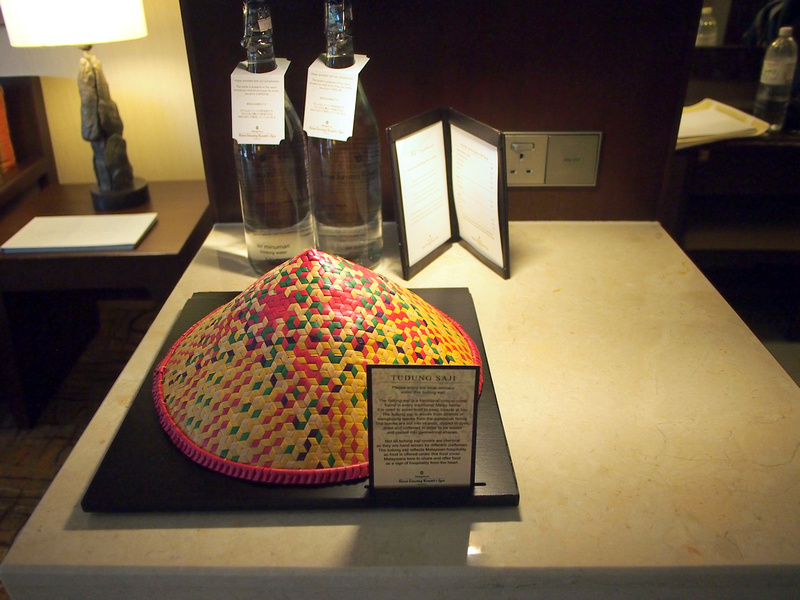 The tudung saji is a traditional conical cover found in every traditional Malay home. It is used to cover food to keep insects at bay. The tudung saji is woven from strands of mengkuang leaves from the pandanus family. The leaves are cut into strands, dipped in dyes, dried and softened in order to be woven and plaited into geometrical shapes.

Not all tudung saji covers are identical as they are hand woven by different craftsmen. The tudung saji reflects Malaysian hospitality as food is offered under this food cover. Malaysians love to share and offer food as a sign of hospitality from the heart.

Under the cover was hup toh soh, which is a Chinese walnut biscuit with a powdery, nutty semi-sweet flavour. 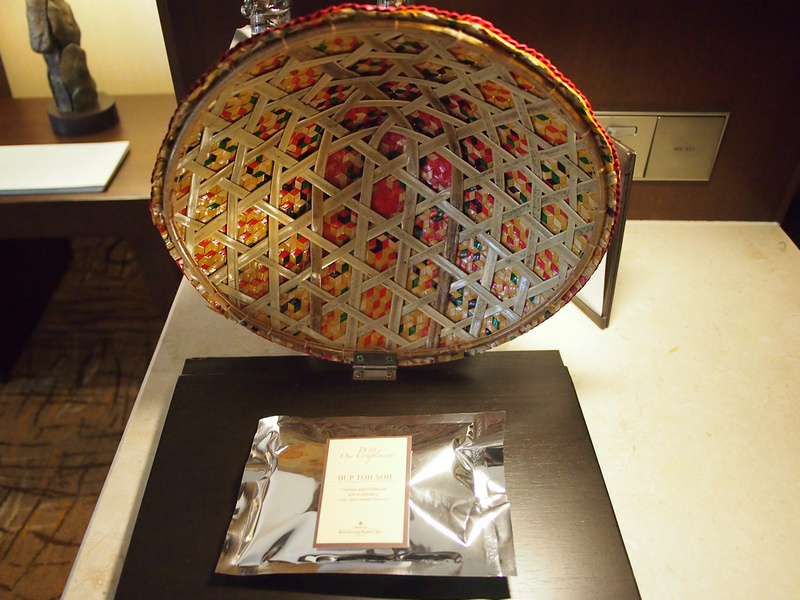 Having reviewed Shangri-La hotels before I knew the bed was going to be a comfortable experience that would be hard to leave, and it was. 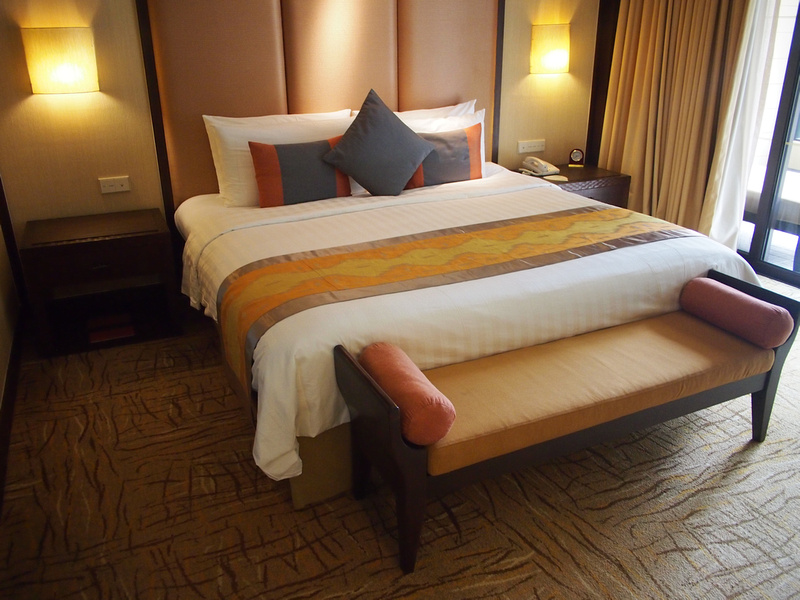 If you can drag yourself off the bed there is a nice lounge area as well. 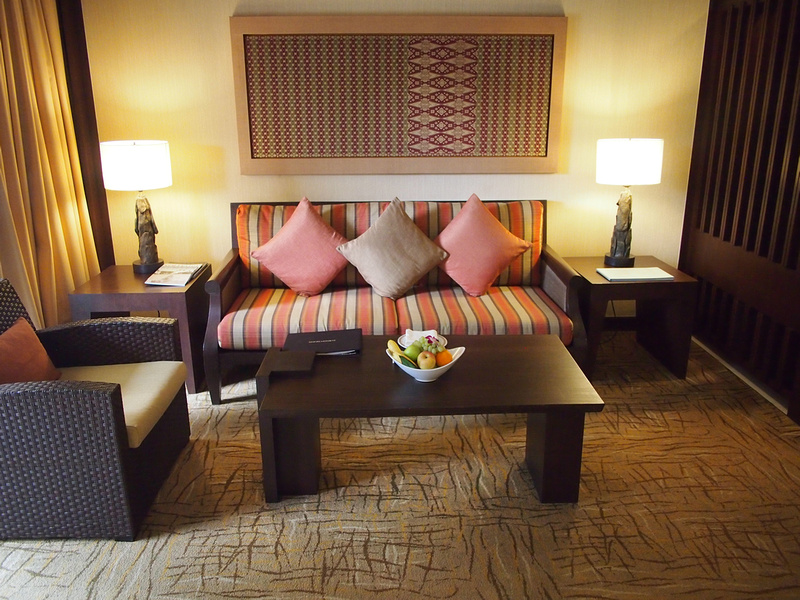 Delineating the bedroom and lounge area is a combined work desk and table. 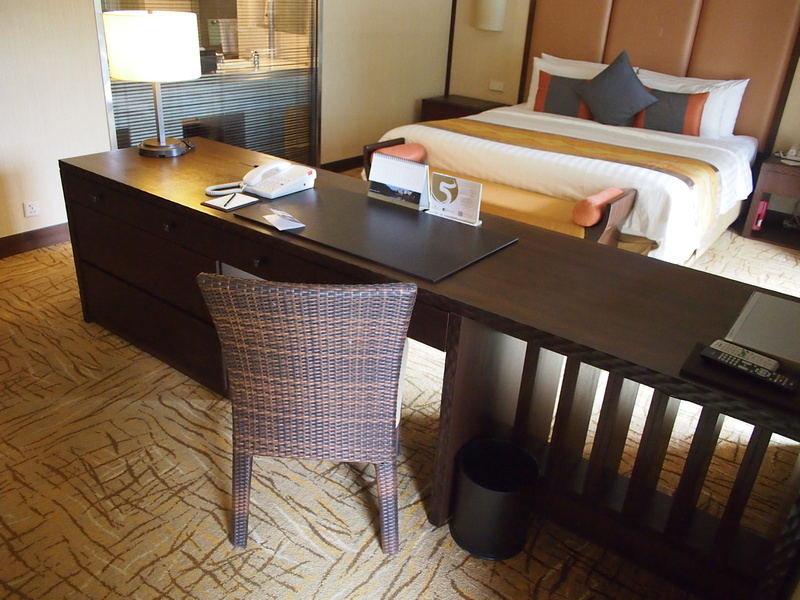 The bathroom was spacious with its natural light coming from a big window that faces the bedroom. This is a great workaround for bathrooms that don’t have an outside window access, and there is a blind if you want privacy from the bedroom. The shower is in a separate room and has three types of shower heads. 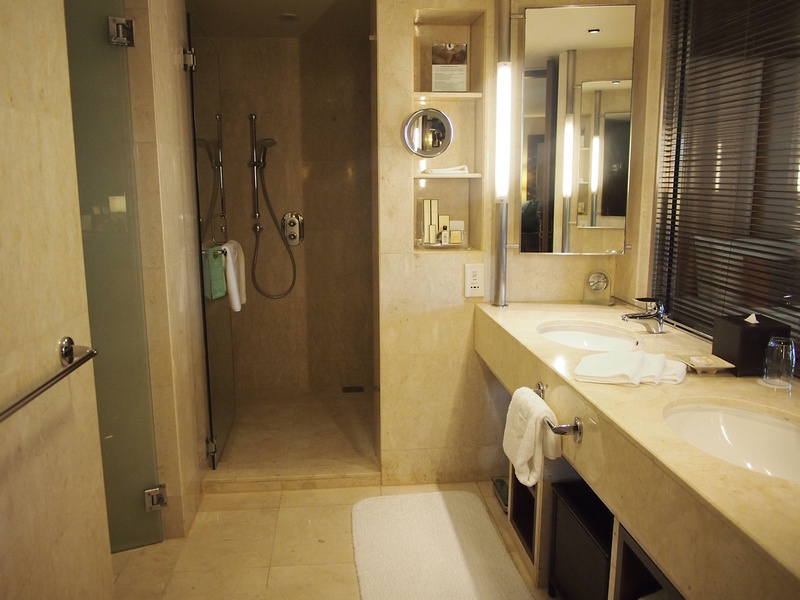 The room has tea and coffee making facilities. 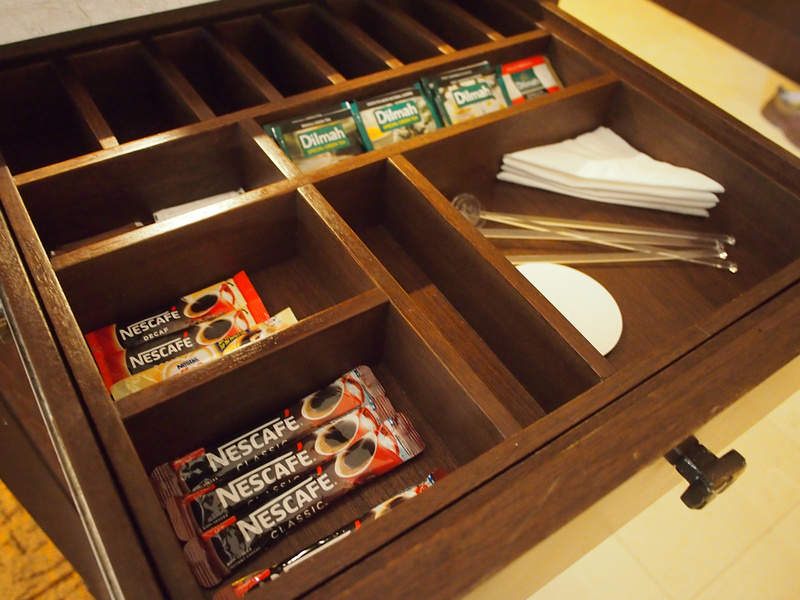 And in a sensible minibar policy, the fridge is stocked with a daily amount of free items. 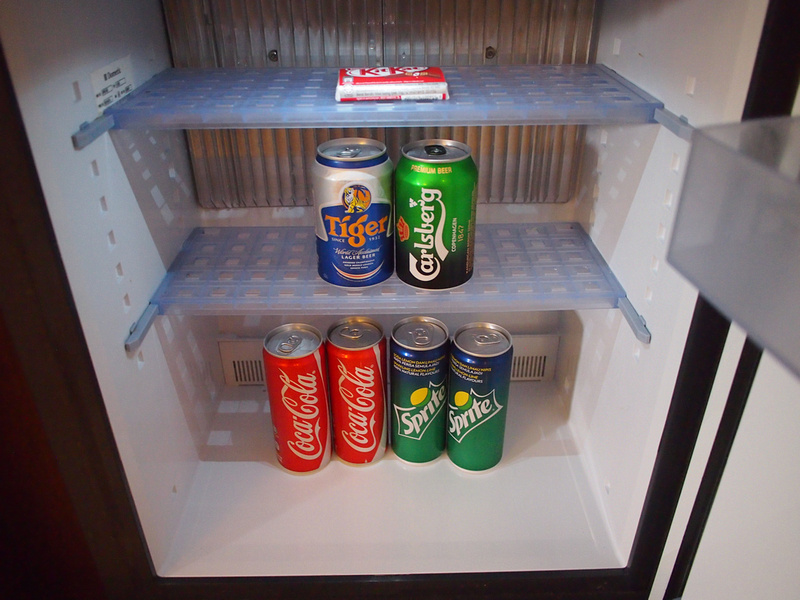 On the balcony overlooking the gardens is a big bath tub with retractable blinds for privacy. For an extra fee you can order room service to prepare a bath for you. 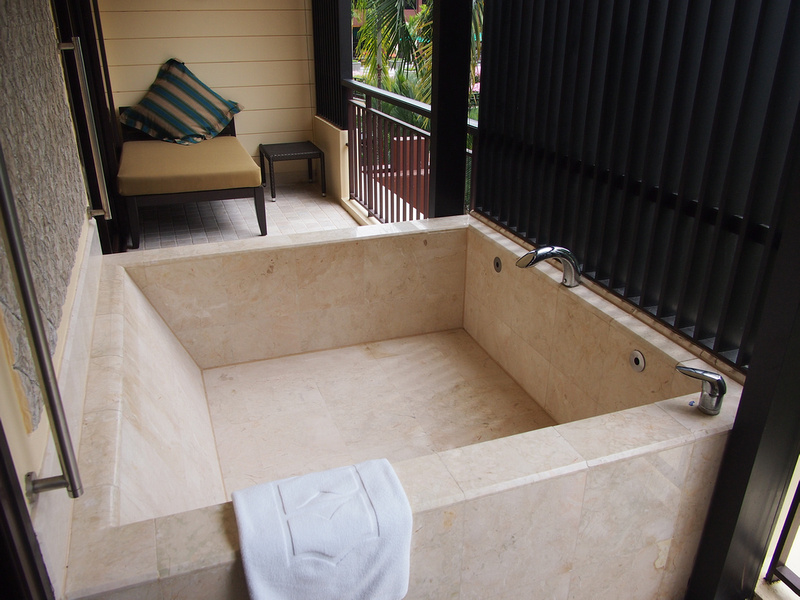 The bath tub was so big that it could almost be a swimming pool. I didn’t use it as I used the actual swimming pools. There are two pools at the resort, with the smaller pool at the Rasa wing being available for adults only. 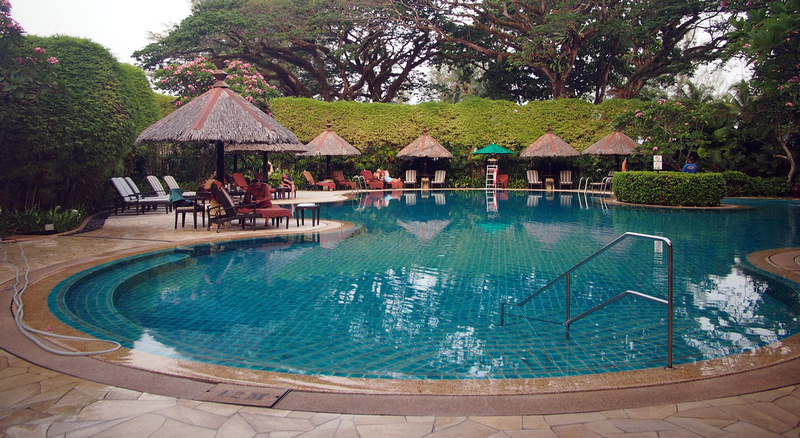 If this was the only pool you would still think it is pretty amazing. But wait until you see the big pool at the Garden wing. This is the main pool and it is flanked by two giant rain trees. It would have to be one of the loveliest settings for a pool that I have ever seen. 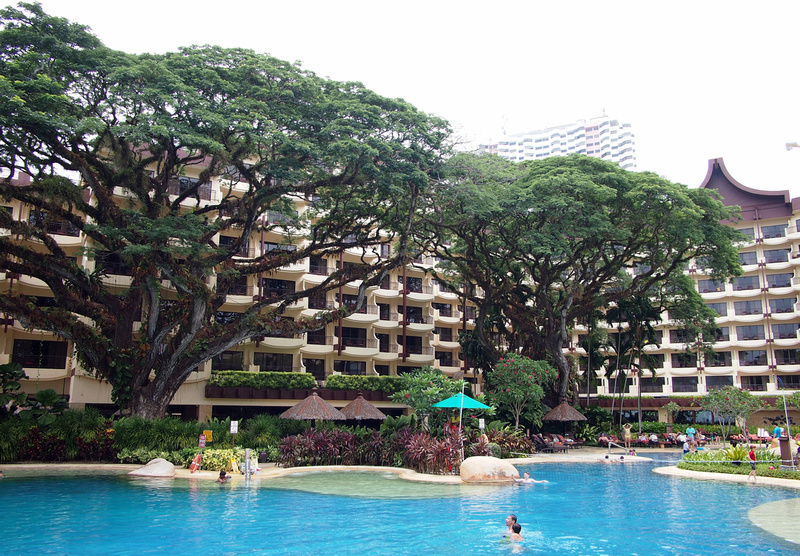 These trees are so grand that the buildings and pools have been built around them. The biggest tree is by the pool.

This grand old rain tree was preserved during the construction of the resort in 1971. It was believed to have been planted by merchants during the late 18th century when Penang Island, which was formally named Prince of Wales Island (under the British East India Co.), was ceded to the British by the Sultan of Kedah on 11 August, 1786. It is the biggest rain tree in Batu Ferringhi and among the few surviving ones along the coast of Batu Ferringhi beach.

There is a well-equipped fitness centre located between the two wings. 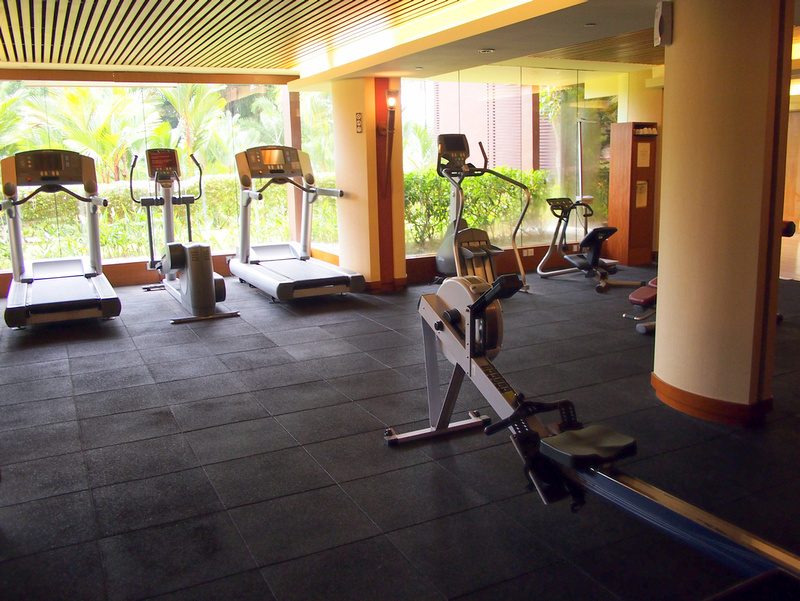 There is a lounge in the Rasa wing with a little library. 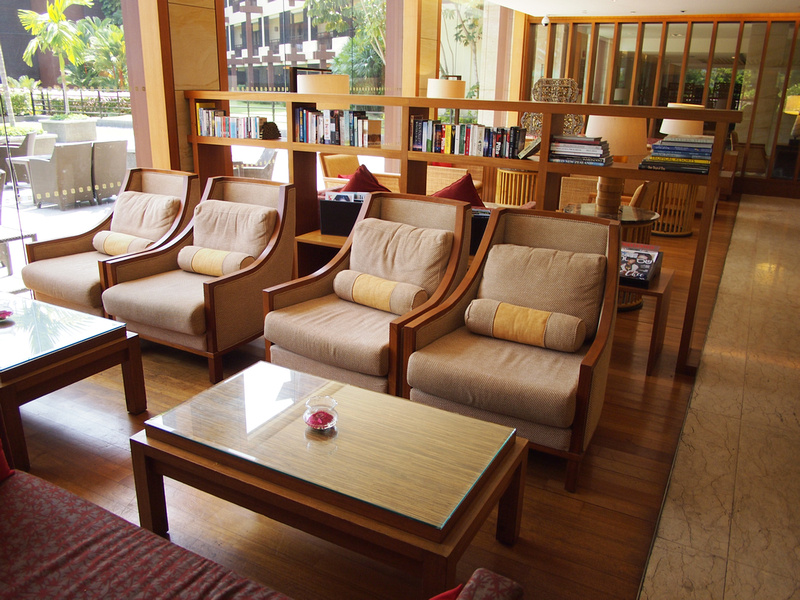 Breakfast is available in both wings, with the larger buffet breakfast in the garden wing and breakfast to order in the Rasa wing, I went for the Garden wing breakfast as there is the option to sit indoors or out in the open near the pool. The wifi signal is everywhere on the property so I had my breakfast while reading online news outside. 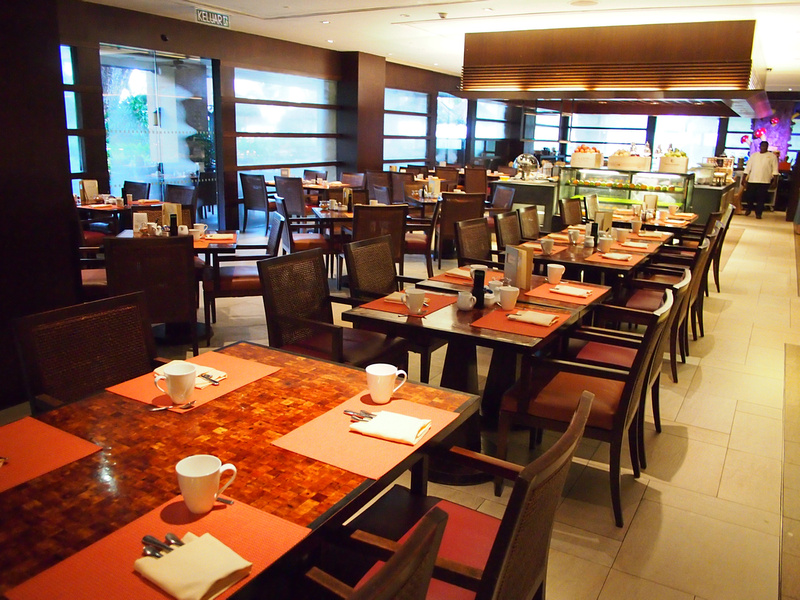 The breakfast buffet is a spread of every kind of breakfast food you can think of, and in a nod to the many Australians that come here (judging by the accents I heard) they even have Vegemite. 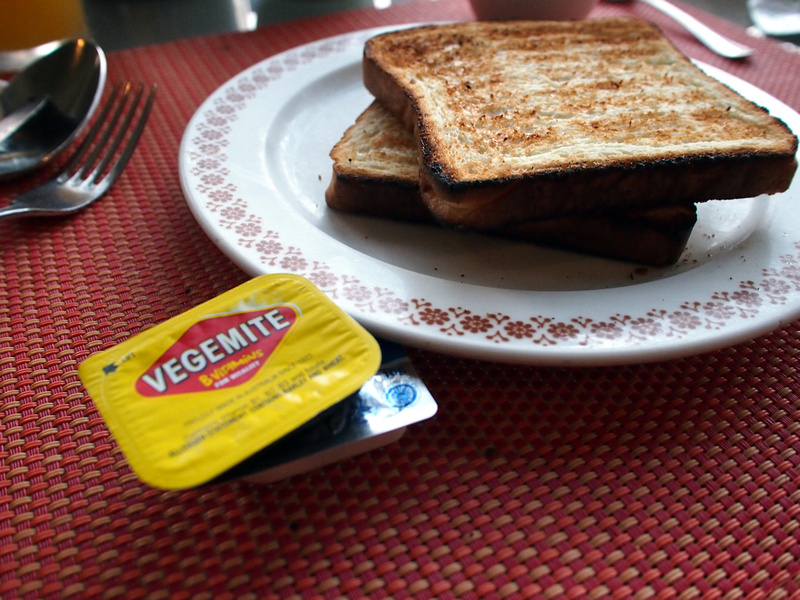 In addition to my breakfast outside I really made the most of being outside in the garden. I rarely sit by the pool at hotels but in this particular stay I did because it was so appealing being in the gardens. 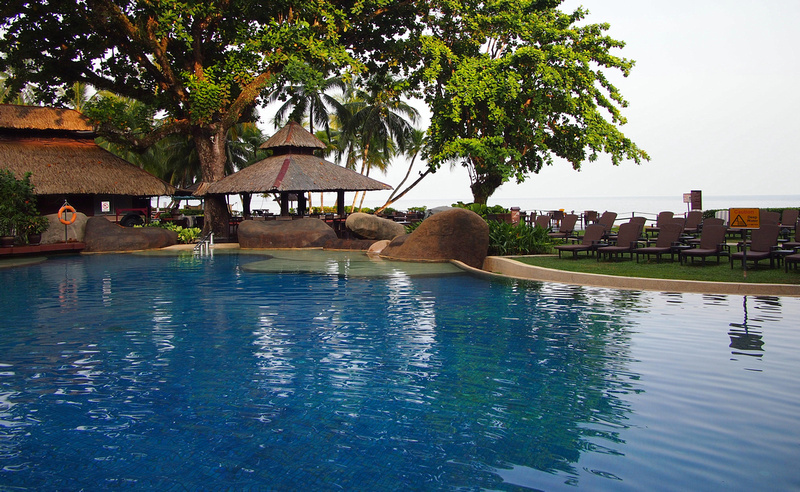 The gardens of the Rasa Sayang is what makes the resort so special. The property is set on what was once a colonial-era estate, which is when the rain trees would have been planted. The coconut trees lining the beach add to the exotic tropical ambiance. 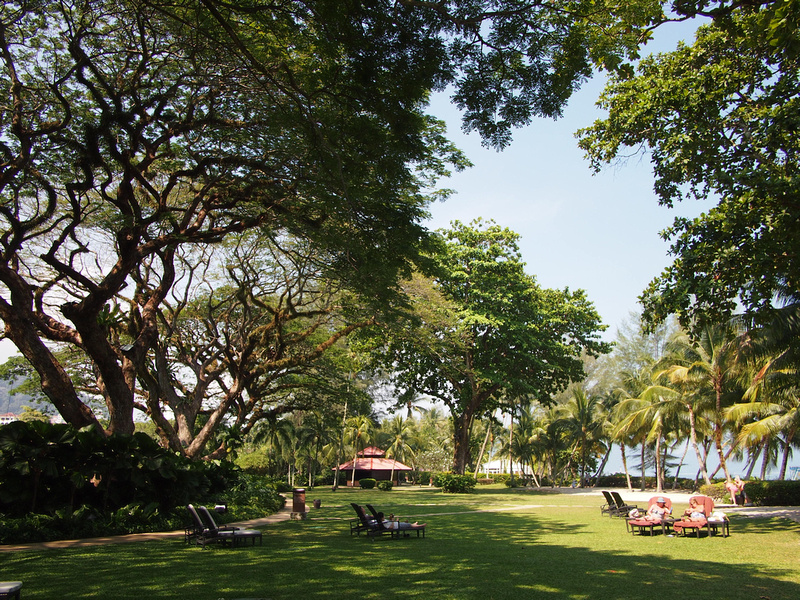 There are a few hammocks located around the gardens where I enjoyed contemplating the rain tree canopies. 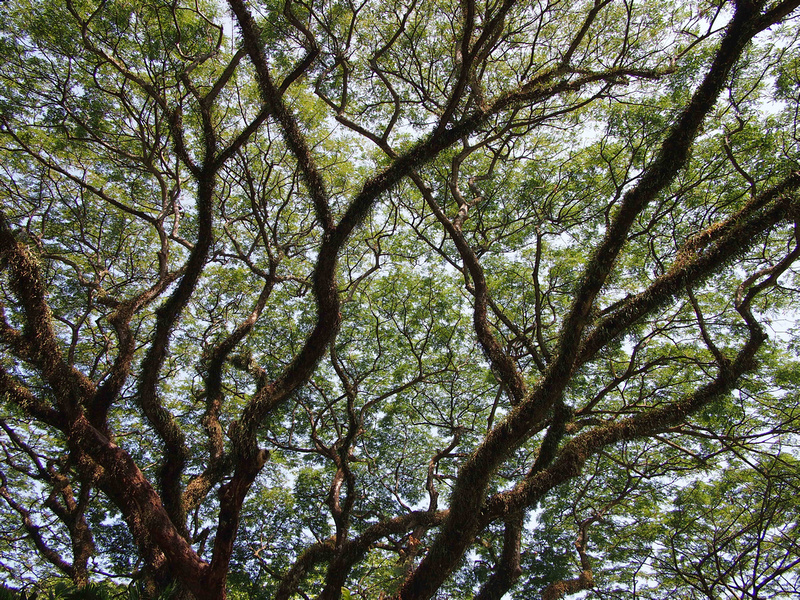 I found this lovely little shrine where workers would make offerings in the morning. 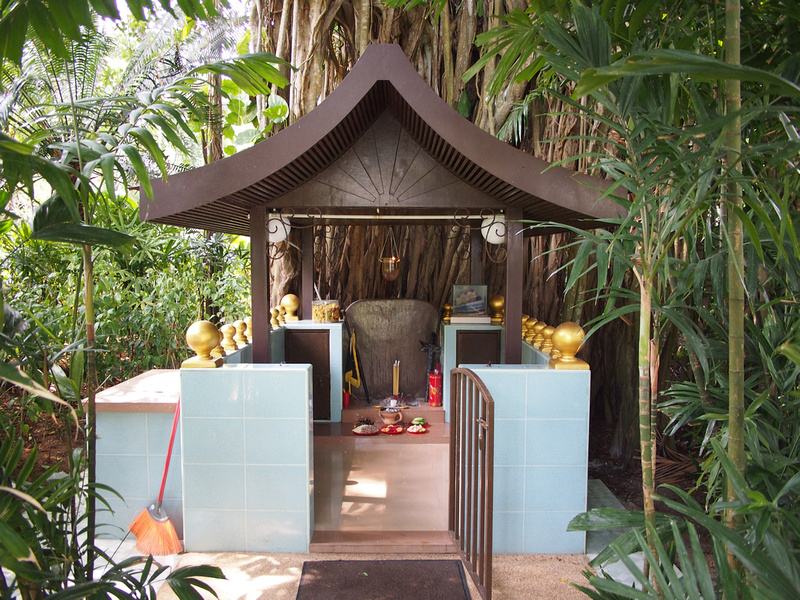 Adding to the greenery of this tropical oasis is a mini golf course, with enough room to practice drives and your putting skills. 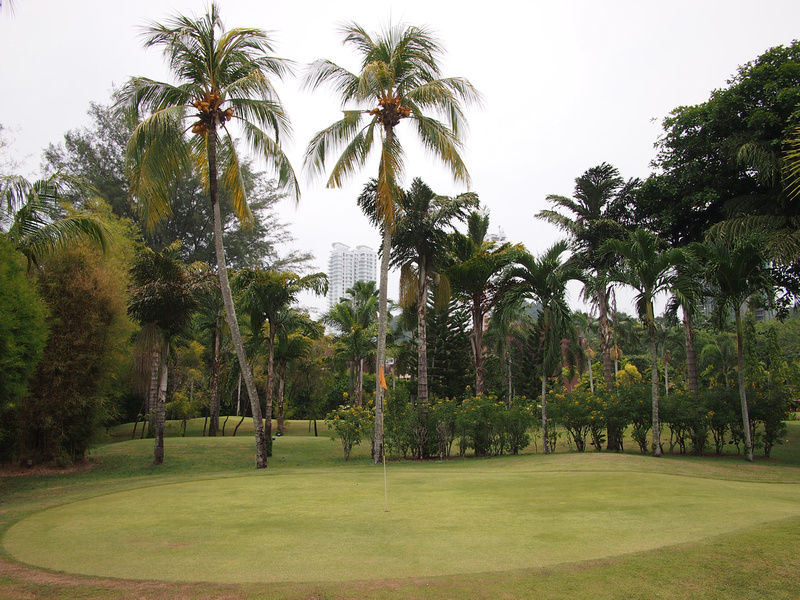 And of course beyond the garden walk there is the beach right on the hotel doorstep. With the hotel being at the start (or end, depending on your perspective) of the beach there is little public activity on what is a public beach.

The water here isn’t a crystal-clear blue like you might find at Langkawi, but it’s clean and the sand is soft and free from trash. With such a great swimming pool I wasn’t tempted to swim in the sea, but it’s a great beach to walk along. There’s no big waves on this beach, just a gentle lapping of the water that can be heard from the gardens and swimming pools. 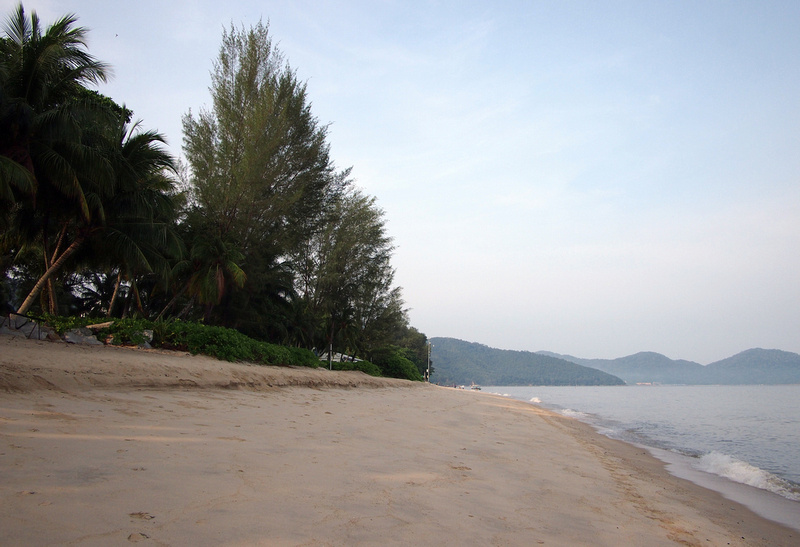 Overall this was an incredible luxury hotel experience. The location on the beach and the old trees on such a large property is what makes the hotel special. It’s a combination that would be hard to replicate and it is easy to see why it is one of the best hotels in Penang.