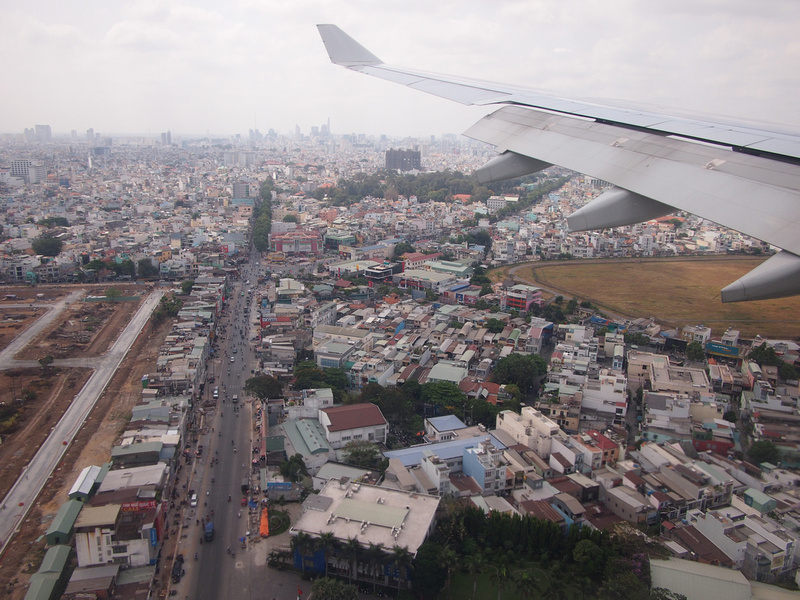 [When flying into SGN get the “A” seat to get a great view of the city.]

Greetings from Saigon. After arriving from Hong Kong on the first of April I found a new room within a day and got back into a routine of eating street food, meeting friends, and working from cafes.

I spent the entire month in Saigon. I thought I would do a side trip somewhere but before I knew it a month went by and the landlady was knocking on my door asking for next months rent.

I keep saying I’m going to do more domestic travel – if only to get out of the city – but I’m still enjoying my urban wanders. I live in District 1, which is one of 24 districts. I like to go on explorations to another district at least once a week to somewhere I haven’t been.

Next to District 1 across a small river is Binh Thanh District. The boundary is 10 minutes walk from my place yet I rarely walk in that direction. I went over for dinner one evening and found an excellent market stall serving bun vit (duck soup with rice noodles). It was so good I went back a few nights later to try the mien vit (duck soup with glass noodle). 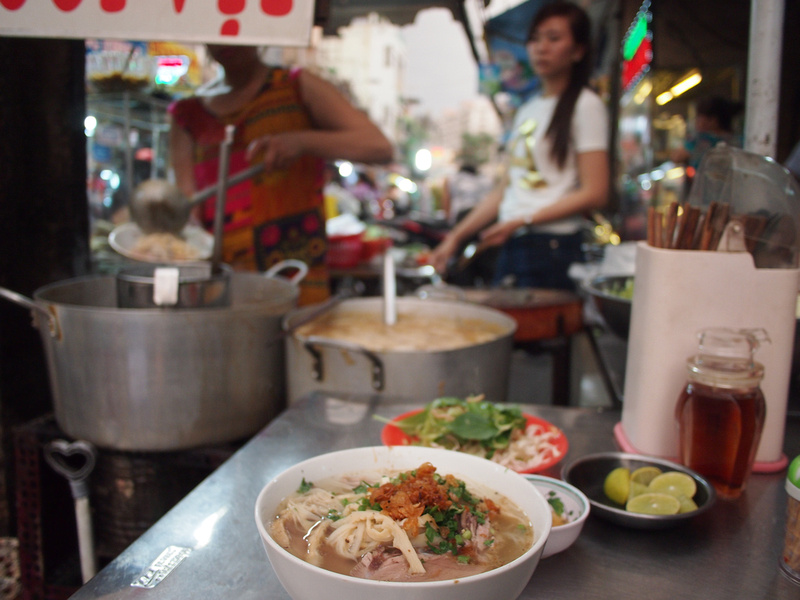 A friend of mine who is a movie-meister asked me to help out on a project he was working on. He is in District 5, which is one district to the west of D1. After work we went to the roof of the studio, which has commanding views of neighbouring D8. 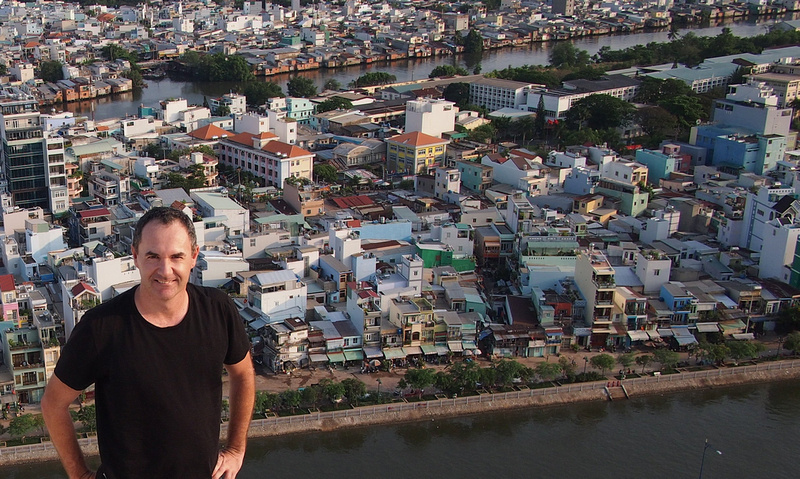 [How many delicious bowls of pho are hiding in the urban density of D8?]

And here is D5 looking towards D1. Note the grey apartment tower in the middle of the picture. That was once military housing for U.S. soldiers. Apparently it’s haunted, and just by looking at it I wouldn’t say otherwise. It looks more like a CIA rendition site. There is a plan to demolish it, which in a rare case of agreement, I approve of this plan. 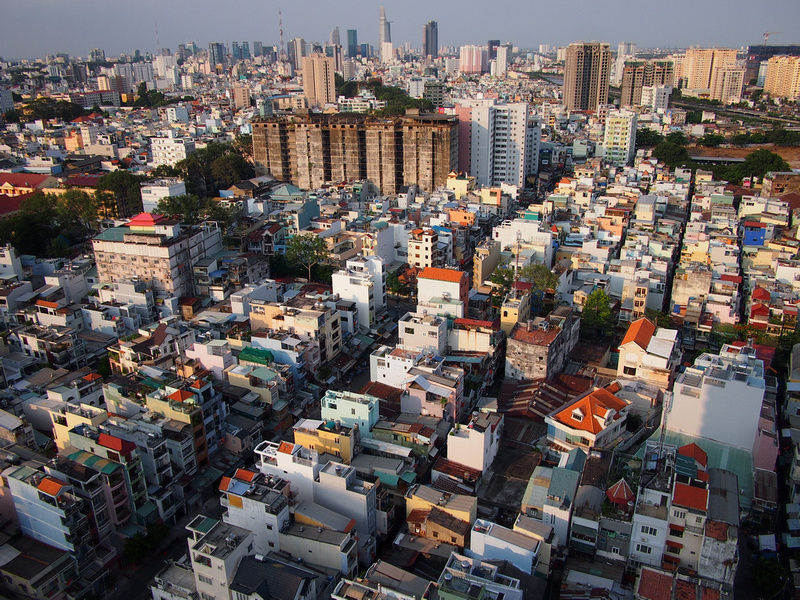 One district I rarely visit is District 2, which is across the river in the new part of town. A friend of mine has moved out there so me and another friend went over to visit, then went wandering around.

One of the highlights of D2 is The Deck, a cafe that sits right on the Saigon River. I forget how mighty this river is, and the cafe is one of those places where I tell myself that I should come back more often but never do. 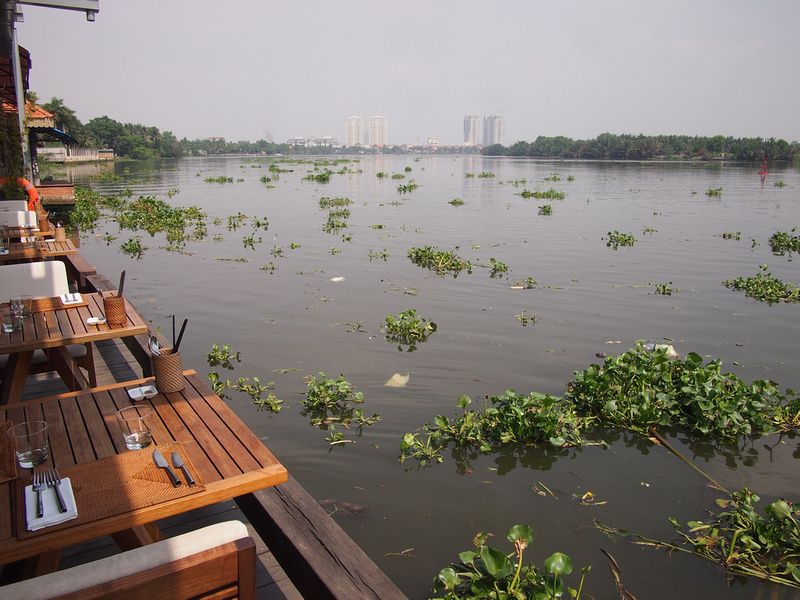 You need a bike if you live in District 2, which is why I am rarely out there. This will change soon as Saigon’s first metro system is currently being built and will pass through. There is lots of construction going on along the line, and I wouldn’t be surprised if there will be a canyon of apartment towers like that has followed the Sky Train along Sukhumvit Rd in Bangkok.

To the north of D1 is Phu Nhuan District. This is one of the districts you pass through on the way to the airport. I met up with another friend for a coffee, and he pointed out all the cafes that are hidden away in Phu Nhuan. I went over there one day and found a cluster of caes I’d never been to, so I have some more to add to the cafe list. 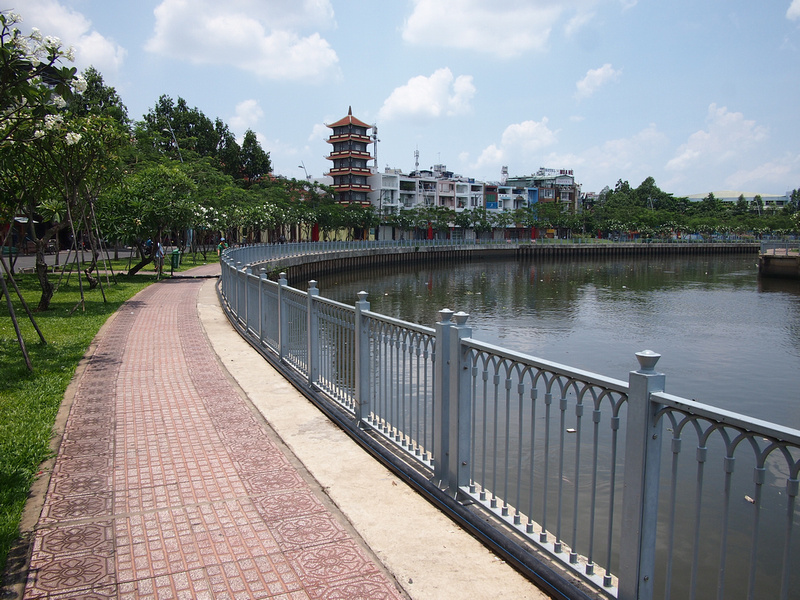 [A lovely walk along the Phu Nhuan/D1 boundary.]

Nothing planned yet for this month but a day trip or two should do the trick. I will be in London and somewhere in Europe next month (of which I’m still working out where to go).