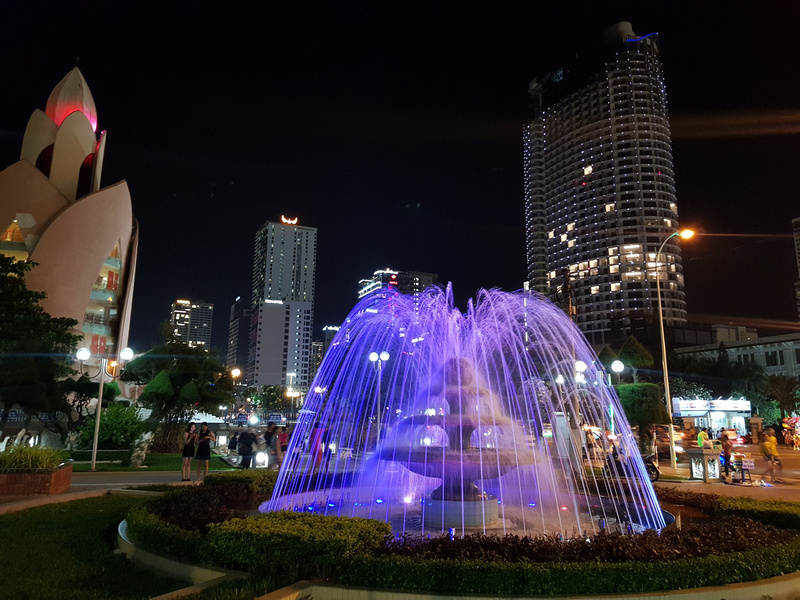 Greetings from Nha Trang and another edition of Where I’m At – my monthly summary of where I’ve been and other site news.

I’m in Nha Trang as I booked a cheap international flight from here, and I’m about to embark on a RTW trip. I’m often a month behind on this blog, so follow along on Instagram for live updates. 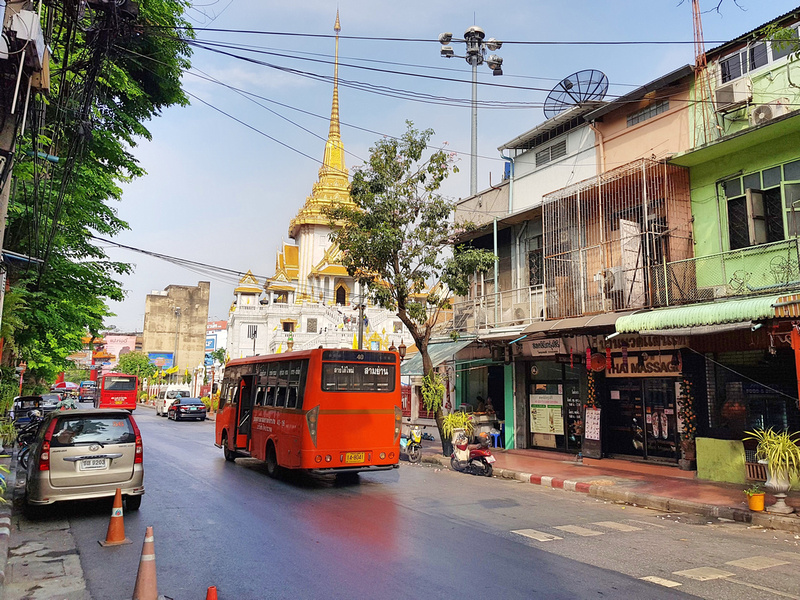 The month began in Bangkok where I had just been to a railway conference collecting leads and information for my Southeast Asia railway guide. I was going to make this a rail-themed trip by going from Bangkok to Phnom Penh on the newly opened railway line. It was meant to open at the end of March, which would have been perfect timing. Instead the railway didn’t open until later in April, and it was only ceremonial. Passenger trains won’t begin until later in the year, so I will come back for that.

With that plan put on hold I had a rare couple of weeks with nothing planned until my next appointment in Singapore. In keeping with my rail theme I figured I should get the train south, so I booked the next available train to Trang.

Here is my review of the train from Bangkok to Trang. 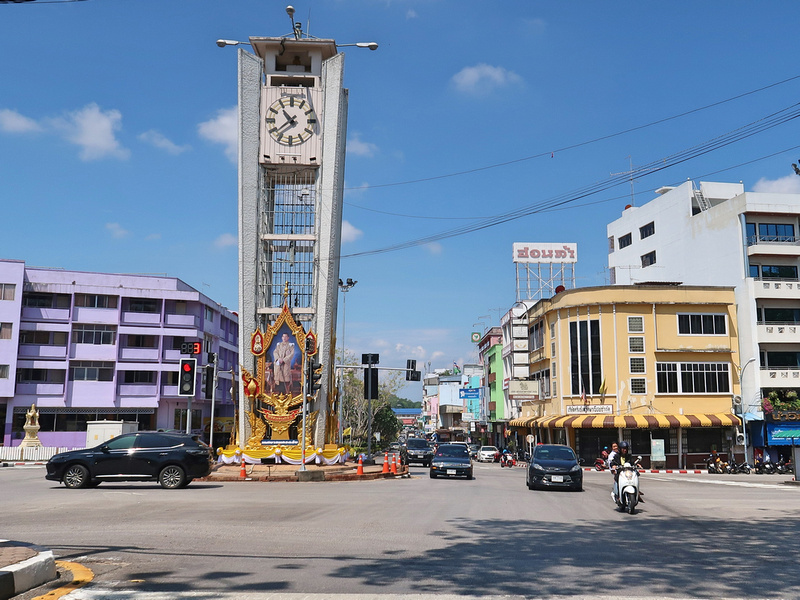 Trang is one of those cities that most visitors pass through on the way to the Trang Islands. If you’re only visiting for a short time then that’s fair enough as you’d want to make the most of your island time. If you’re doing slow overland travel then Trang makes a worthy stop, even if only to see the famous Trang tuk tuks. 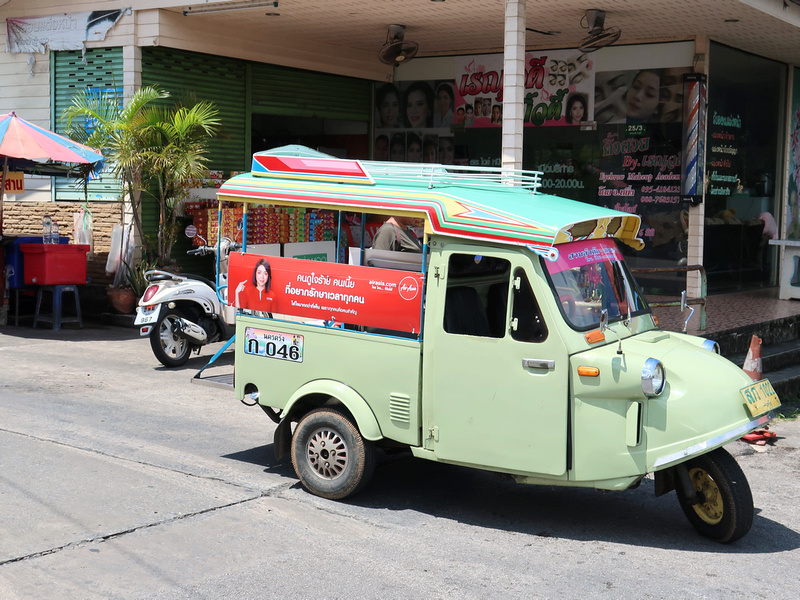 There is a great night market here, and I found a cool cafe to visit as well (Old Town Cafe). 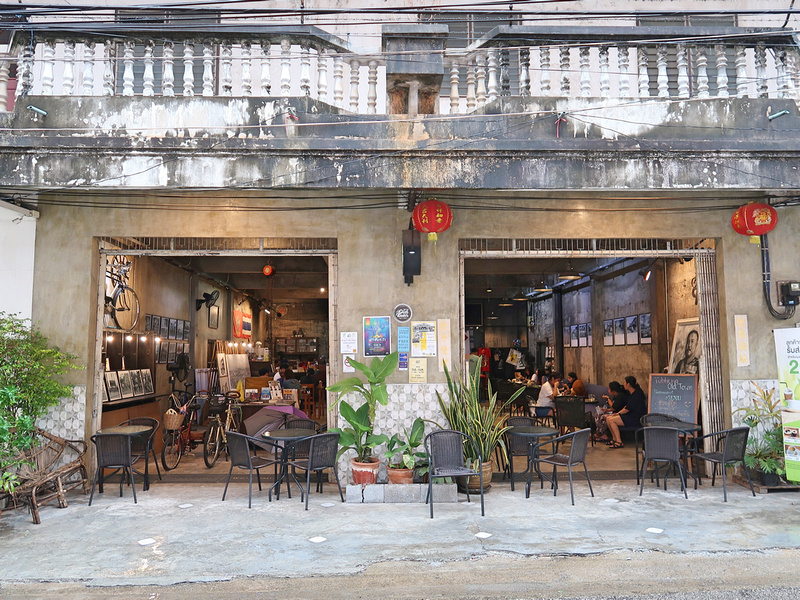 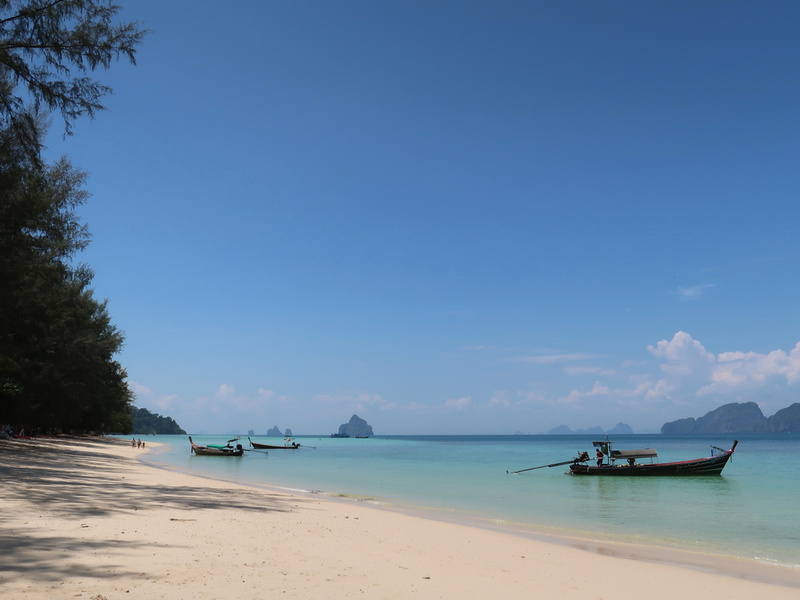 When I was in Bangkok I caught up with a fellow blogger, and we got talking about the power of the one day trip. Sometimes a one day trip is all you need to reset and get back to work refreshed. Or sometimes there’s not going to be a chance to visit again for a long time, which I realised when a day in Paris is better than no day in Paris.

And so it was that I spent a day in Koh Kradan. Looking back at my last month of travel it feels like Koh Kradan was but a dream, and I’m glad I snuck a day in there in between my rail trips.

Here is my review of Koh Kradan – The tropical island paradise in Thailand you’ve been dreaming of. 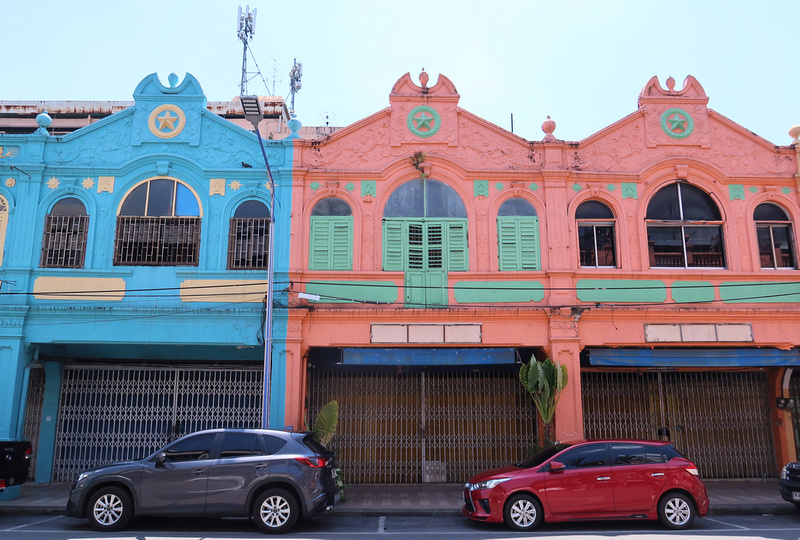 Another city that more travellers go through than to is Hat Yai. I’ve been here a few times as it has a way of keeping you there despite yourself if you’re travelling around the south of Thailand. In this case I arrived here in the afternoon from Koh Kradan, so there was no time to continue on. I like visiting provincial cities like Trang and Hat Yai, and part of the appeal is just wandering around looking for things of interest like a little temple or a shop with old signs and decorations. I usually look for a night market, and on this trip I lucked out with a weekend food festival. 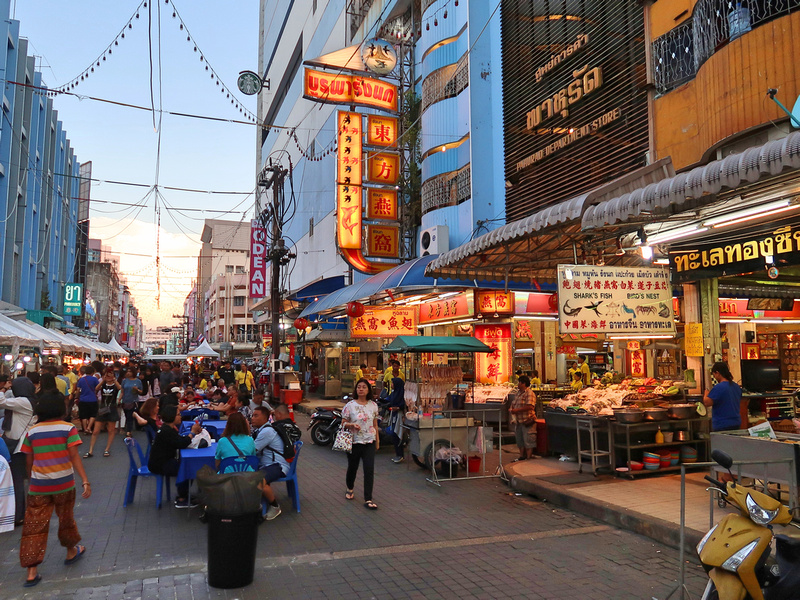 From Hat Yai I got the train to Sungai Kolok, through the troubled deep south of Thailand. 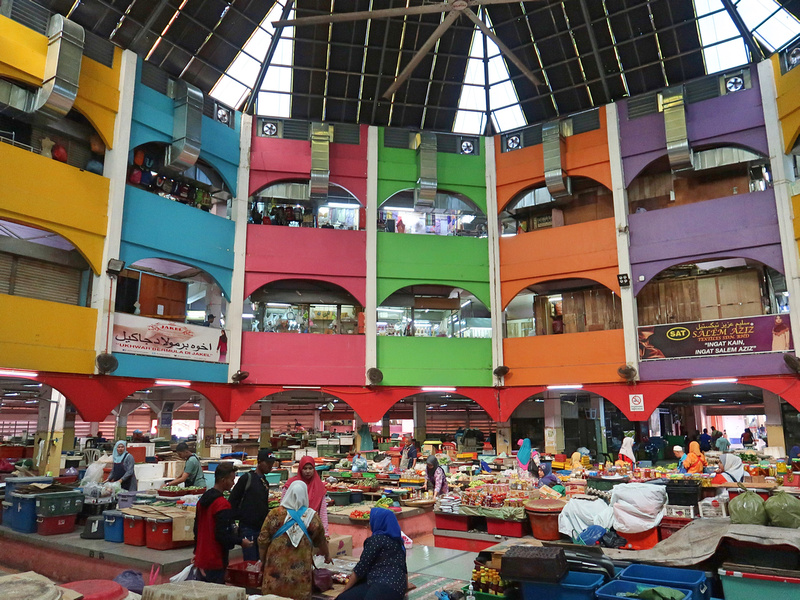 Kota Bharu is the state capital and royal seat of Kelantan. For many visitors it’s a transit hub to the Perhentian Islands or the start of the Jungle Railway, which was why I was there. I had half a day to wander around before my train the next day.

I headed to the riverfront expecting to see an old town of some sorts, but the city is still waiting for a rebirth like Ipoh. Most of the heritage buildings were in bad condition. 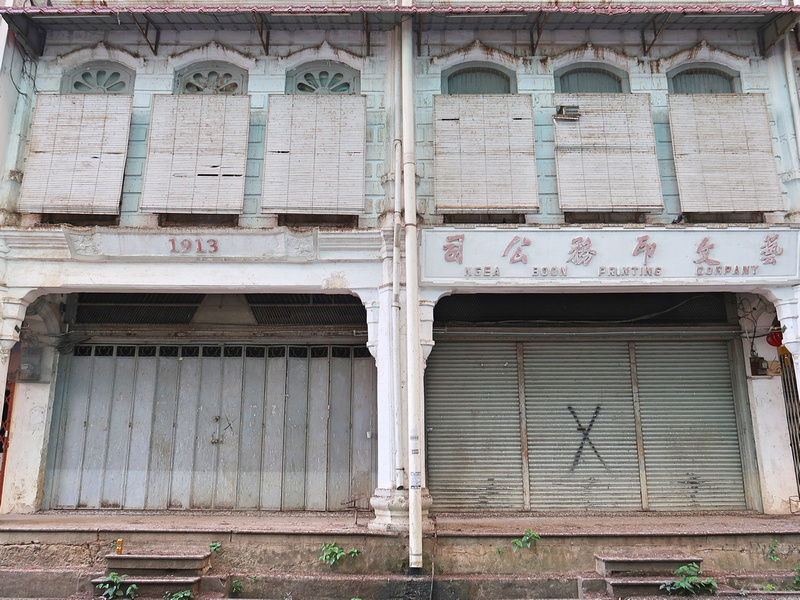 It was at least encouraging to see the renovation of this Lee Rubber Building. 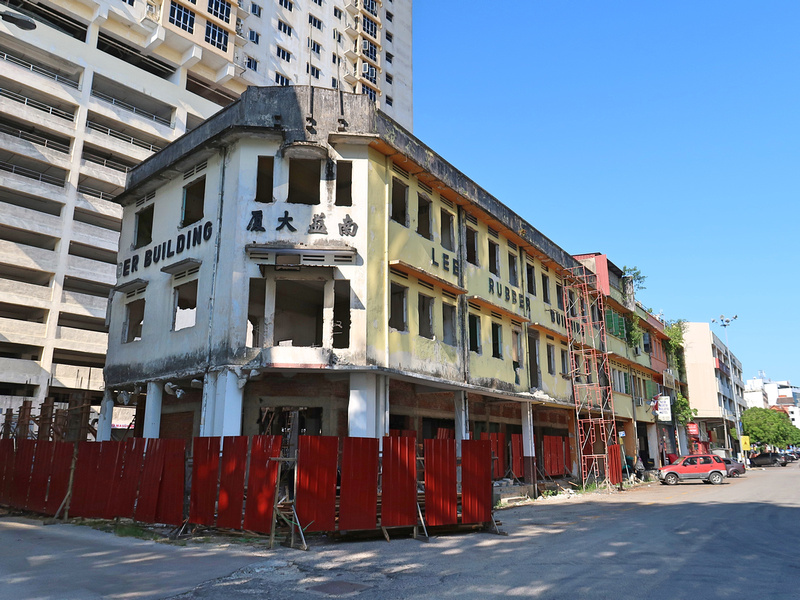 I found a good cafe at Tiny Elephant. Their latte’s rival any of the best in KL, and hipster cafes tend to be harbingers of an impending urban regeneration, so maybe an urban revival is close at hand. 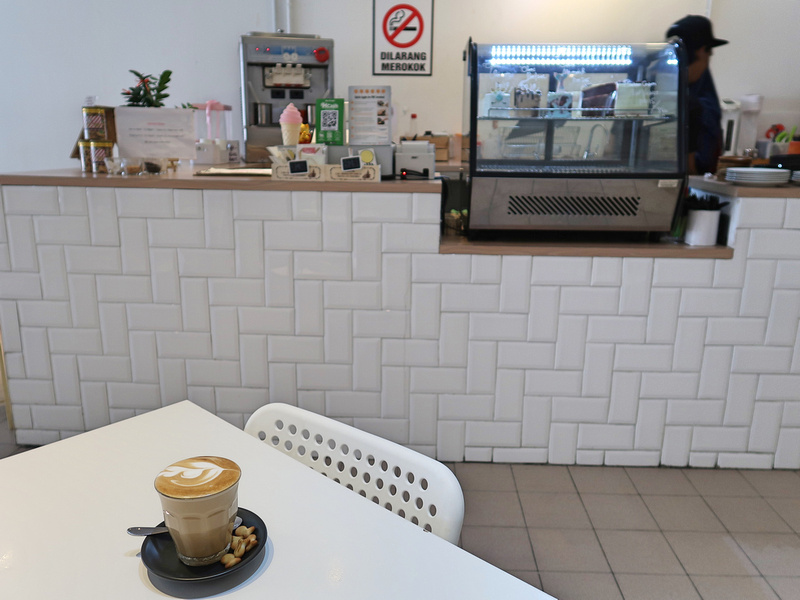 There wasn’t much going on in the old area, but just outside the city centre it’s more lively. The street food stand at Nasi Kukus looked incredible. 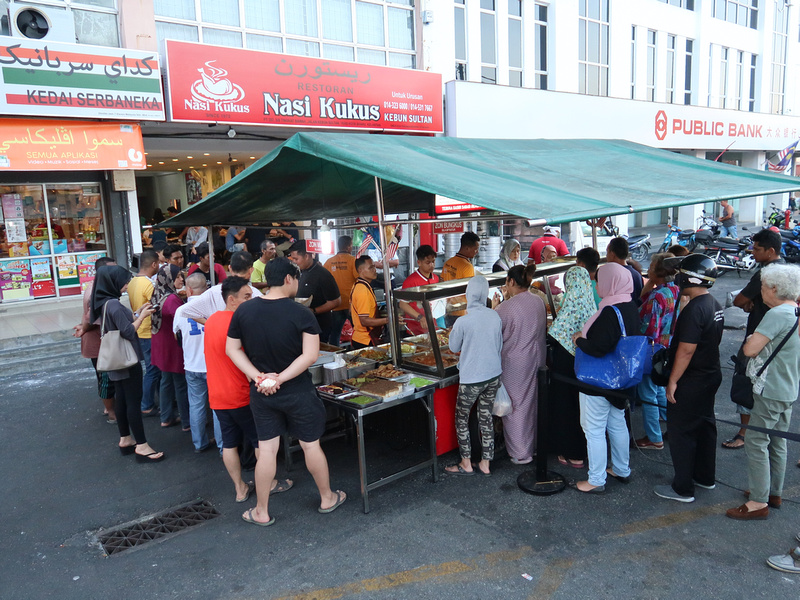 And if I hadn’t just come from Thailand that day I might have been tempted by this Thai street food place. 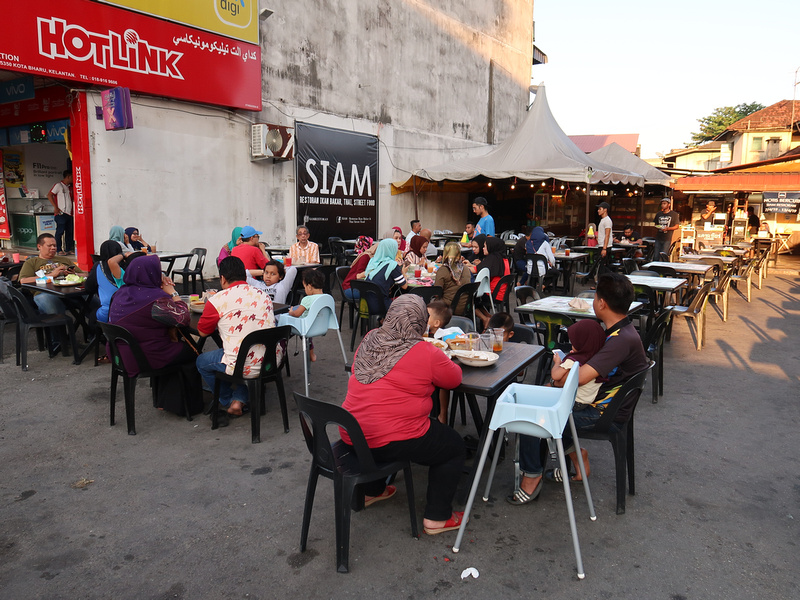 One thing that annoyed me greatly was the amount of bird nest farms in the city centre. Edible birds nests cost a premium, so farming has become a lucrative business.

With so many abandoned buildings in the city centre they became ideal structures to be repurposed as bird nest farms. To attract the birds the farmers broadcast bird squawking on loudspeakers, producing an eerie and disturbing noise throughout the day. As the bird nests are so expensive the farmers have fortified their investment with barbed wire on top of the buildings. As a result the city centre looks like an abandoned war zone with these old buildings covered in barbed wire, with a Hitchcockian soundtrack in the background. 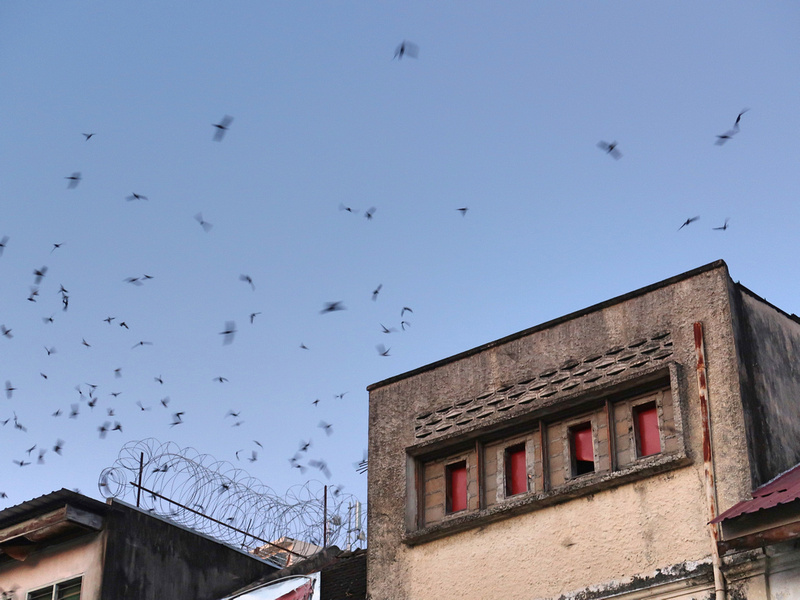 As I was to later discover, this is a phenomenon that has spread along the east coast of peninsula Malaysia. I saw some purpose-built bird nest farms among the vast palm oil plantations in Malaysia, and that’s where they should be kept. This should be classified as an agricultural business and kept within agricultural zones, not in residential areas. 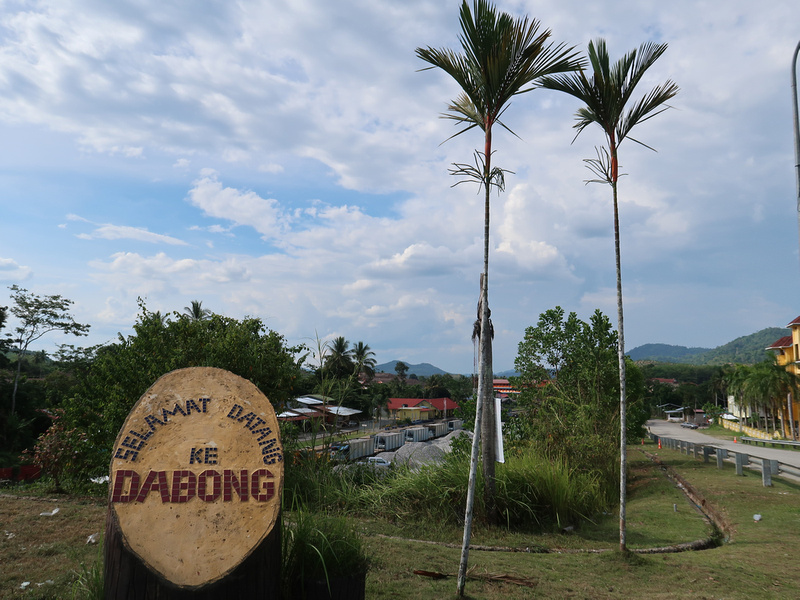 Ahh if only I was a stoner, as I would have amused myself immensely by asking “where’s Dabong?” (Behind the couch where you left it last night?) Before I started planning my Jungle Railway trip I had never heard of Dabong. I had a forced layover here as the local train on the Jungle Railway terminates here. Rather than continuing overnight and missing the jungle I stayed here. 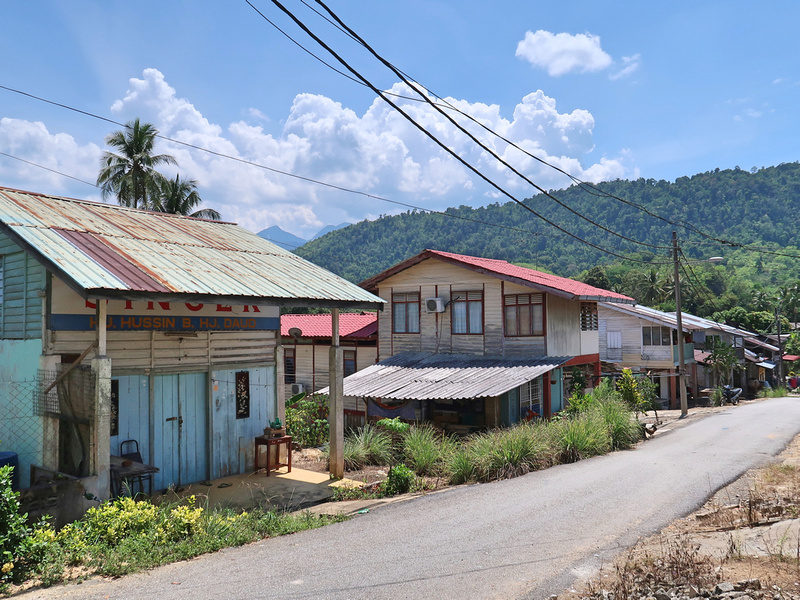 It was a good change of pace to stay in a small town. 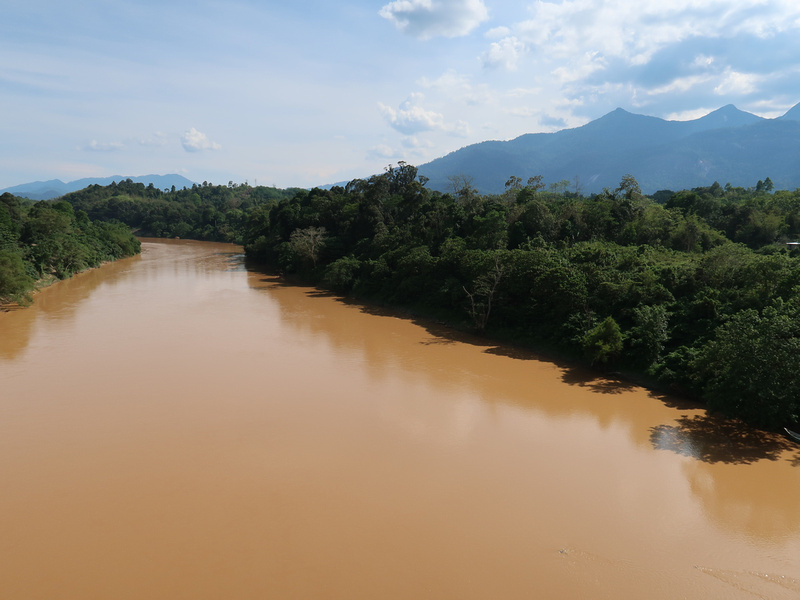 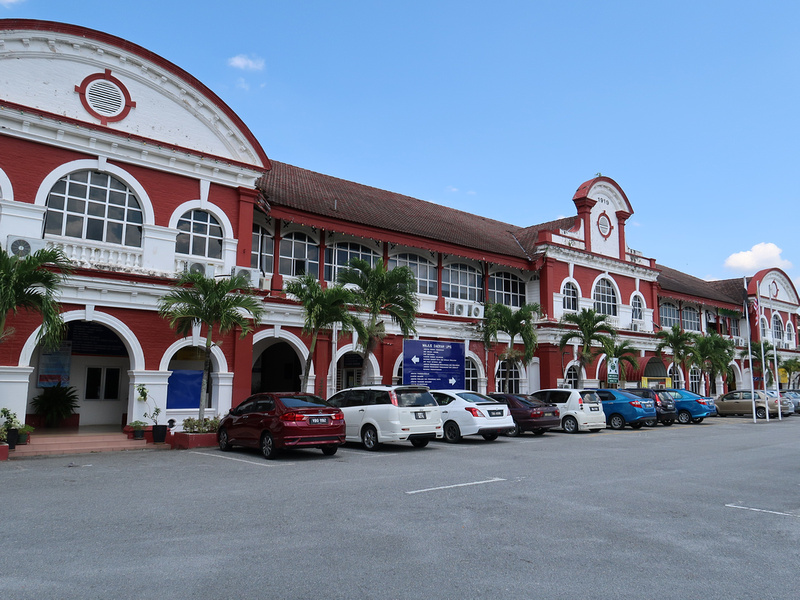 Kuala Lipis turned out to be a surprise packet. “Little KL” is almost at the centre of Peninsula Malaysia, and it was the capital of the state of Pahang until 1953. Being a former colonial-era capital, Kuala Lipis has a collection of heritage buildings that makes that city a worthy stop if you are crossing the peninsula. They have a map listing the most important sites, which I found reassuring that these buildings are valued. 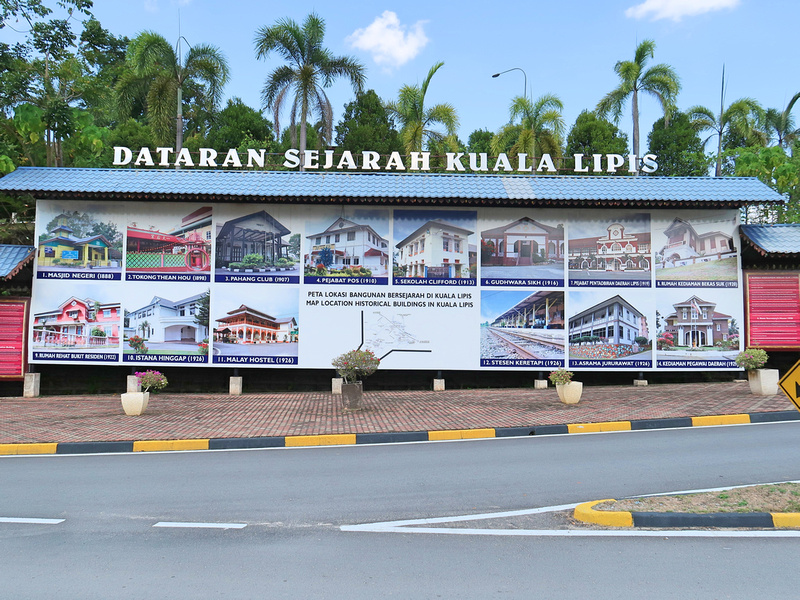 There is an old town area between the train station and the river, with some shophouses and old hotels. 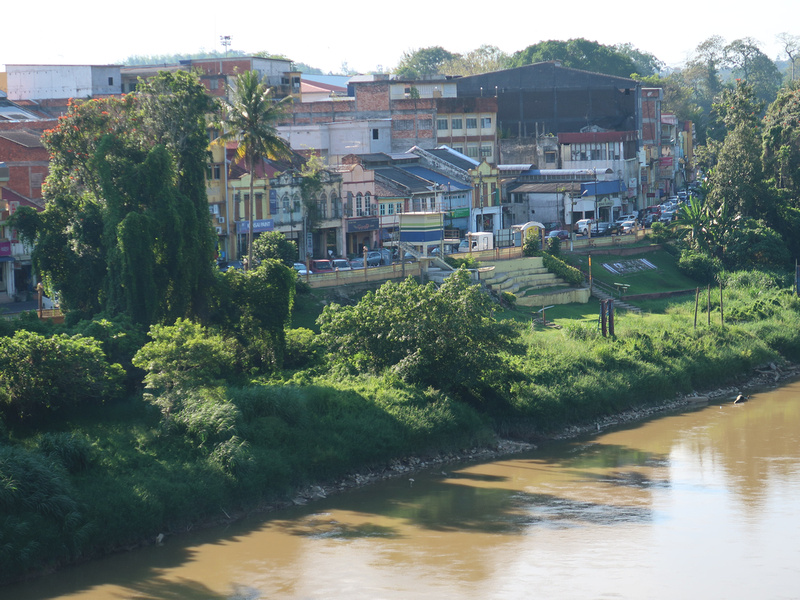 There are two main streets that are lined with some architecturally interesting buildings. 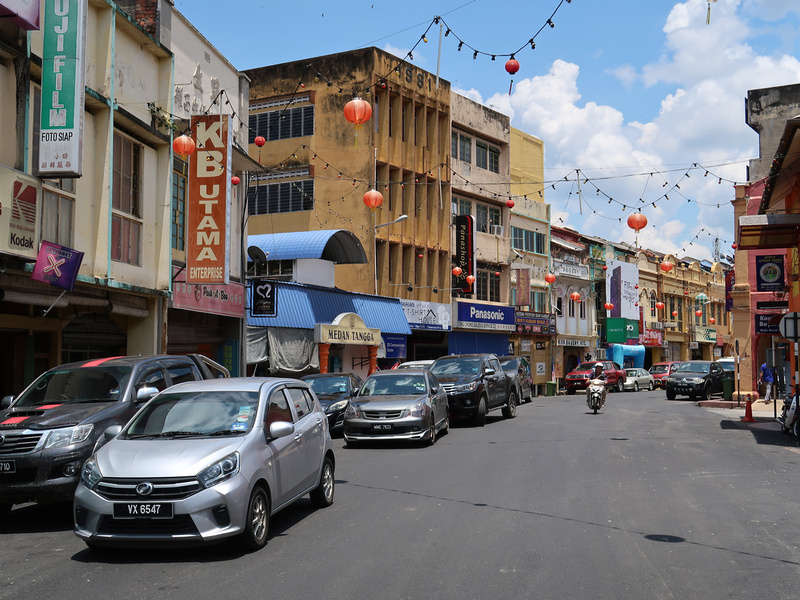 Some of them are in bad shape though. I saw this old sign promoting “Visit Malaysia Year 1990”. If they put that up in 1989 that was 30 years ago! Some of these buildings look like it’s been longer since they were last renovated. 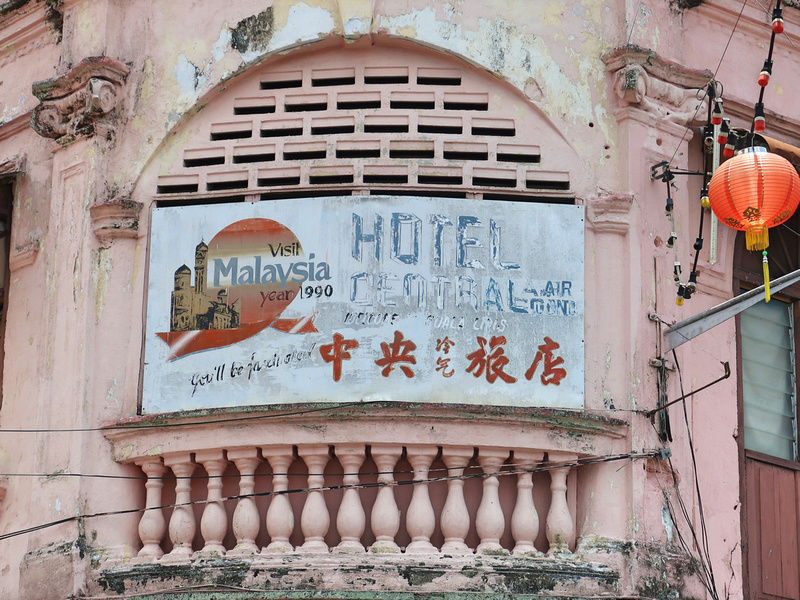 On the riverfront street there are some shophouses in ruins, and they may not be recoverable. 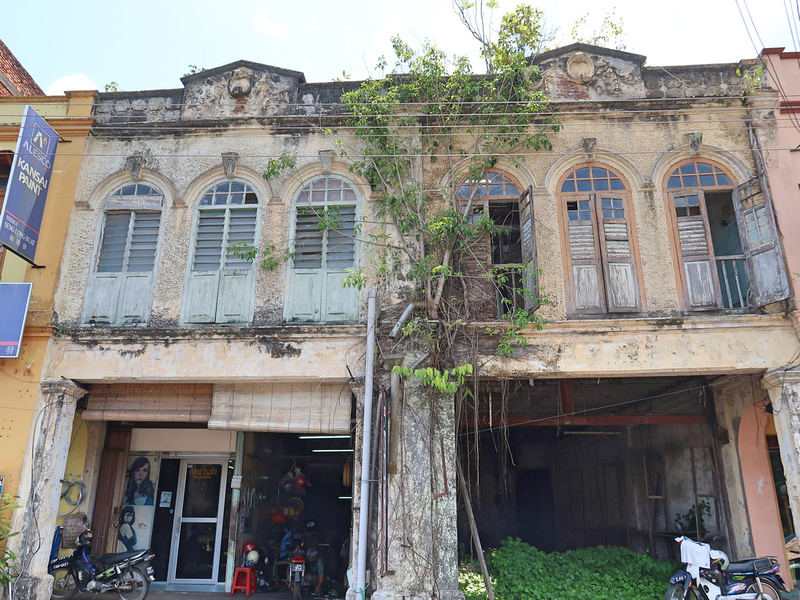 I saw one shophouse that had been renovated and it had all the hallmarks of a hipster cafe. I went to the door but it was locked. I saw the owners there, who were preparing to open a new cafe. Unfortunately I was a few days too early, but I left Little KL encouraged that it may be about to have it’s regeneration. 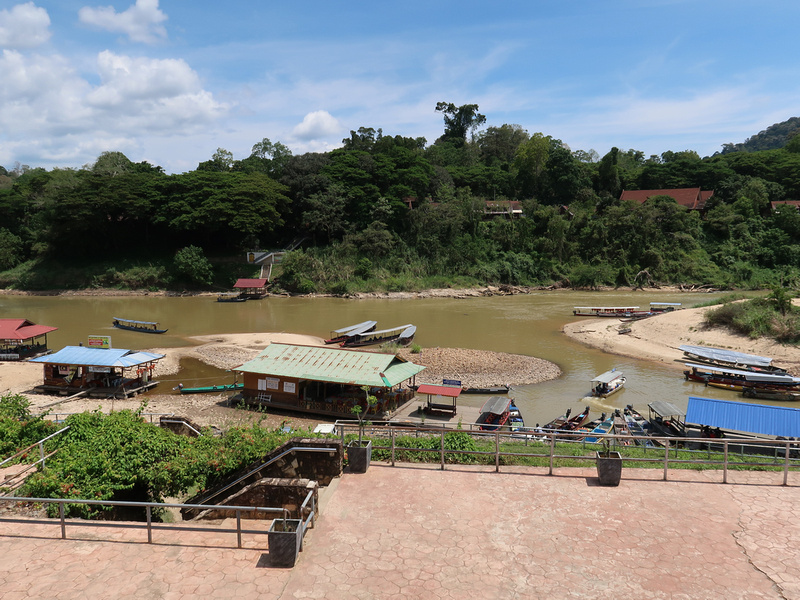 This overland trip through Malaysia had been all about visiting new places, and what better way to end my Jungle Railway journey than by finally visiting Taman Negara. Literally meaning national park in Malay, this is the oldest park in Malaysia, and a deserving owner the national park name.

The soothing sounds of the Tahan River in Taman Negara.

I will have a review of the Jungle Railway and Taman Negara.

After slogging it out on the Jungle Railway and actual jungle of Taman Negara it was good to be back in my natural habitat of the concrete jungle. Rather than continuing overland to Singapore by train I got an apartment here for a few days to get some work done and investigate construction projects in the city.

The view from my airbnb apartment in KL. I sleep with the curtains open so I can wake up to this.

While I was in KL I saw this advertising for a mobile internet company referring to digital nomads. This is the most high profile mention of the digital nomad way of life I’ve seen in advertising. Interesting to note that it was in Malaysian, so it’s also gone beyond the stereotype of being just for western tech bros.

From KL I went to Singapore, where I went to cover a story about the world’s best airport. I arrived at an hour that was way past my lunch time, so rather than waiting to get into town I had lunch at the airport. There are lots of food options on the landside and airside, and I ended up having a proper nasi lemak for 4.42 USD. 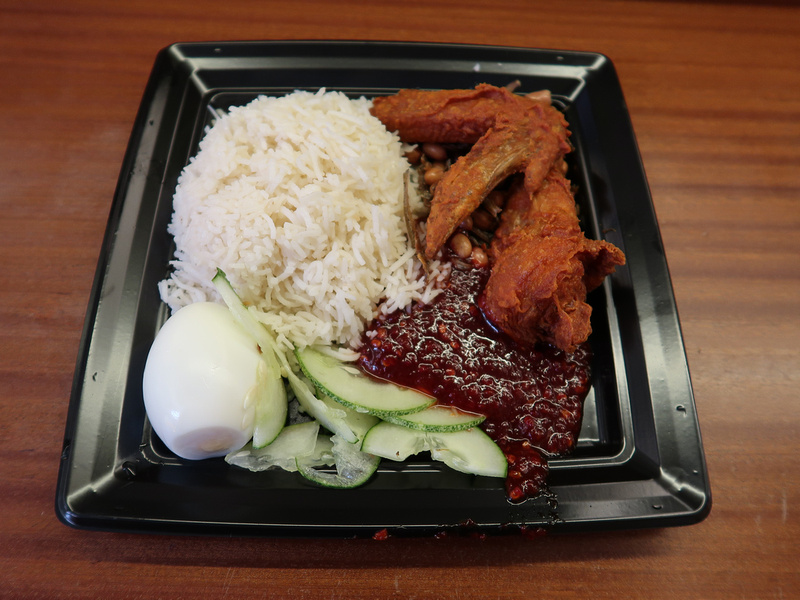 While I was in Singapore I visited The Interlace, which was designed by the same architect that designed the Mahanakhon Tower in Bangkok. I saw this on a great nature walk that you can do in Singapore, which I will post soon.

The reason I was in Singapore was to get a preview of the Jewel Changi Airport.

Last month @changiairport was proclaimed best airport in the world for the 7th year in a row. That was before the Jewel Changi opened. I can't see how any airport is even going to get close in the future. The giant indoor rainforest with waterfall is aslo a mall. It's on the landside so anyone can visit, and a transit train from T2 to T3 passes through it.

As it turned out I booked two big trips with not much time in between. I was back in Saigon for two weeks, which was not enough time to catch up on my trip reports let alone other work I had to do.

I got to see Avengers: Endgame, and I was reminded that Stark Tower looks like the Bitexco Financial Tower. There is a cinema here and it seems like a missed opportunity that they didn’t run some kind of Avengers/Stark Tower promo here.