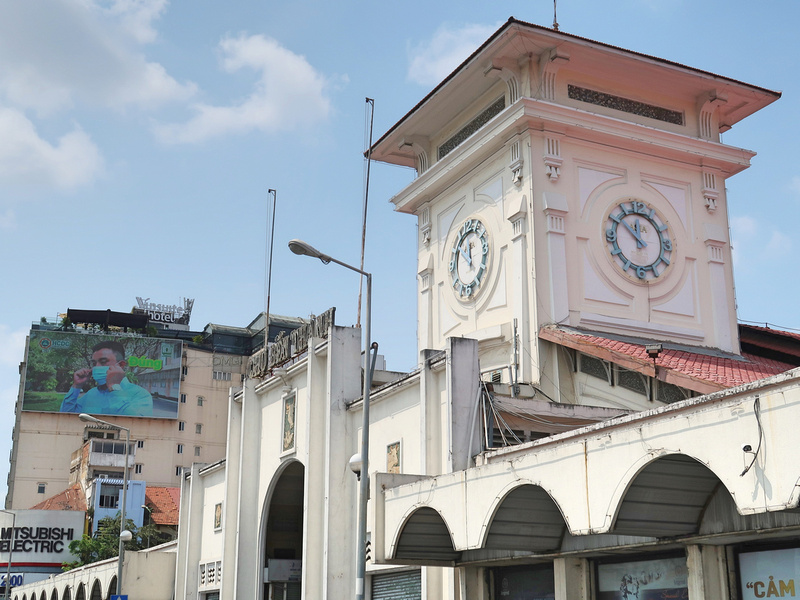 Here’s a summary of where I’ve been last month. Follow me on Instagram for where I’m at in real time.

Goa wasn’t on my radar at the start of January, but after my Pakistan visa application fiasco I ended up following my heart and booking a trip. I’ve been wanting to go back for years, so after stopping over in Bengaluru I went to Goa.

I broke one of my (lightly enforced) travel rules of India, which was that I should visit a new state on every visit. There are 28 states and 8 union territories in India, so there are enough to keep me busy for a lifetime of visits. I have the same rule for US states, of which I have visited 21 so far.

I’ve long since given up entertaining the thought of visiting every country in the world, as every time I visit a place I want to explore more of that place. My last trip to Goa I stayed in South Goa, so this time I stayed in North Goa. I’ve now visited the two districts of Goa, and who knows I might be back again to visit interior Goa.

My first stop was Anjuna. I read about Anjuna being a party beach, and by the afternoon some of the beach bars transform into EDM parties. The beach is big enough for everyone though, and I found that in the morning the beach was all mine. 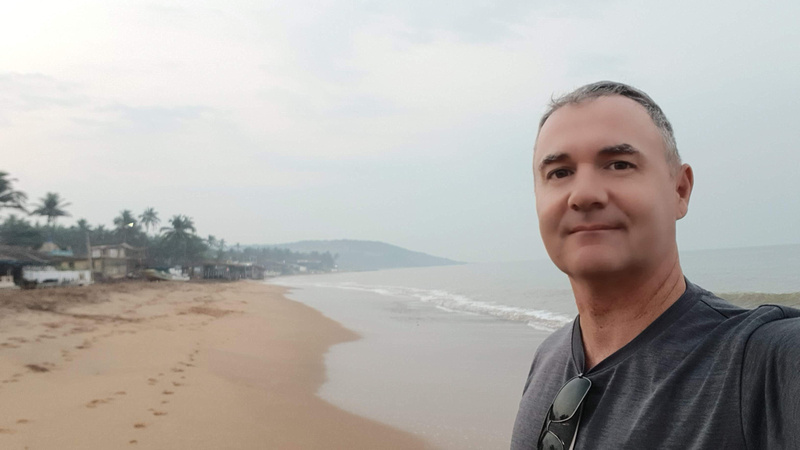 One morning I got up for my morning beach walk and it was just me and the stray dogs. While walking along I saw a dead man on the beach. The body was in front of one of the beach cafes, and there were workers setting up aware of the situation. He was fully clothed, suggesting death by misadventure, as many alcoholic deaths are classified.

At this point the novel coronavirus was starting to dominate the news. Even though the virus doesn’t make you drop dead on the beach, the thought crossed my mind. I had just read a news article about a man who was not given CPR over coronavirus fears.

India was one of the safest places to be at that early stage, mainly because there are so few flight connections between India and China. I’ve thought about this before when in 2013 I flew from Delhi to Chongqing, via Guangzhou. I looked up to see if there was a more direct route, and it turns out there are hardly any flights from India to China. At the moment Delhi has flights to four cities in China. Mumbai (the largest city in India) has no direct flights to anywhere in China. That blows my mind that the two most populous countries in the world that share a border (albeit a disputed one), doesn’t have a direct flight between the two biggest cities of each country.

In comparison, while researching Vietnam’s aviation market I found out that Nha Trang in Vietnam has flights to 30 Chinese cities, Singapore has 34 cities, while Bangkok (BKK) has flights to 51 cities in China.

Even with few flights, the nature of globalised travel means that the virus is going to find its way around the world. I stopped in a cafe to read a local newspaper to see that the virus had reached Goa. 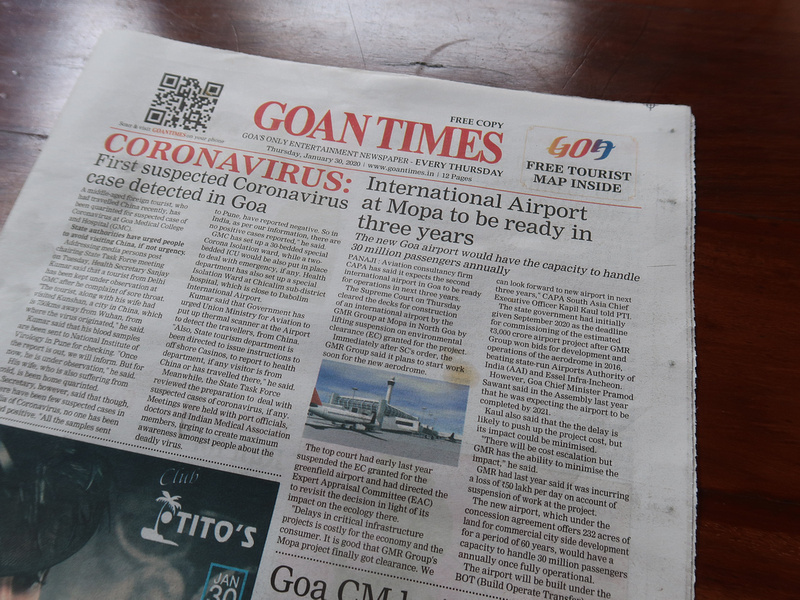 After Anjuna I moved to Mandrem, where I had an online booking mishap. It turned out that I booked a hotel on booking.com that no longer exists. My taxi driver drove around for 30 minutes trying to find the place. After realising what happened I said just drop me off now, which was at Ashvem Beach.

I then went looking for a room without a booking, which reminded me of my first trip to India where I just turned up at places without a reservation. I was having trouble finding a place, and by now I was feeling like the wheels had fallen off my plans for the day. Then a wheel literally fell off my bag. 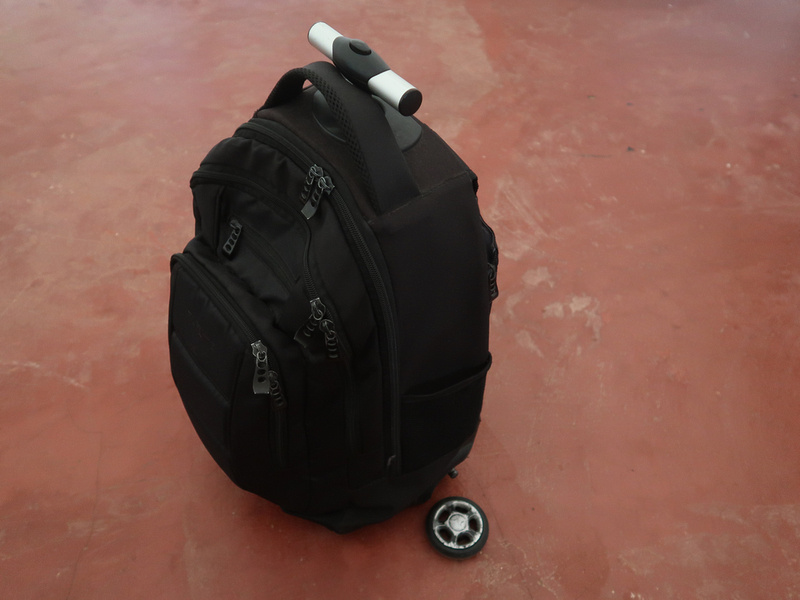 The wheel came off in front of a cafe, so I took it as a sign to get a coffee and make a plan. The cafe had the best coffee I had on my trip, so my bag was clearly telling me to stop there. I ended up staying at the attached hotel.

From Mandrem I then migrated to the next beach north to the hippy-friendly beach on Arambol. Here is my full trip report on the beaches of North Goa.

Panaji is the capital of Goa. Lots of great old buildings, murals, and way more chilled out than your average Indian city.

After staying on the beaches I knew I would need some time in a city, so before flying out of Goa I stayed in the capital of Panaji. Not being on a beach probably makes it less of a tourist attraction for most. Here are my notes on Panaji.

I also visited Old Goa, which used to be the capital until it was abandoned due to a plague (how timely). Look out for my post about Old Goa.

I’ve been to Kolkata before, and being a big travel hub I could end up there again to go to other places in the future. I was interested to see how the city is faring with heritage architecture preservation, and to see its new metro system under construction. It’s an amazing city with so much potential, and I will have a blog post about it soon.

Kolkata was the one thing I did have planned this month. There are now direct flights from Kolkata to Ho Chi Minh City by IndiGo airlines, so I booked a ticket when it was announced and worked out an itinerary later. I’m interested to see if Vietnam can develop an India travel market to counter over-reliance on the Chinese travel market (as Thailand are trying to do). Unfortunately with the COVID-19 outbreak, there was no way of knowing if the half-full flight was because of lack of demand or because of the virus. 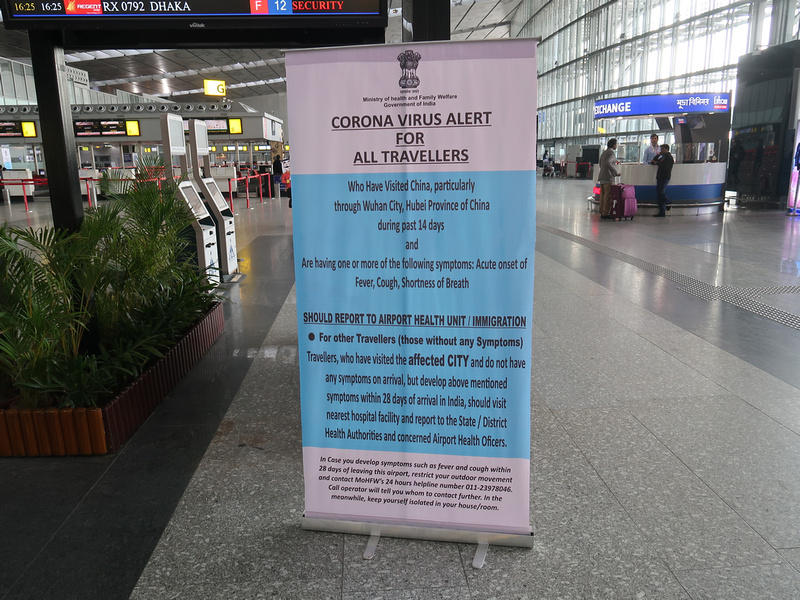 Anywhere you go after India will always feel different, even places with traffic as crazy as Saigon. Things were definitely feeling weird though, but I wasn’t sure if it was my altered perception post-India, or because of the coronavirus. 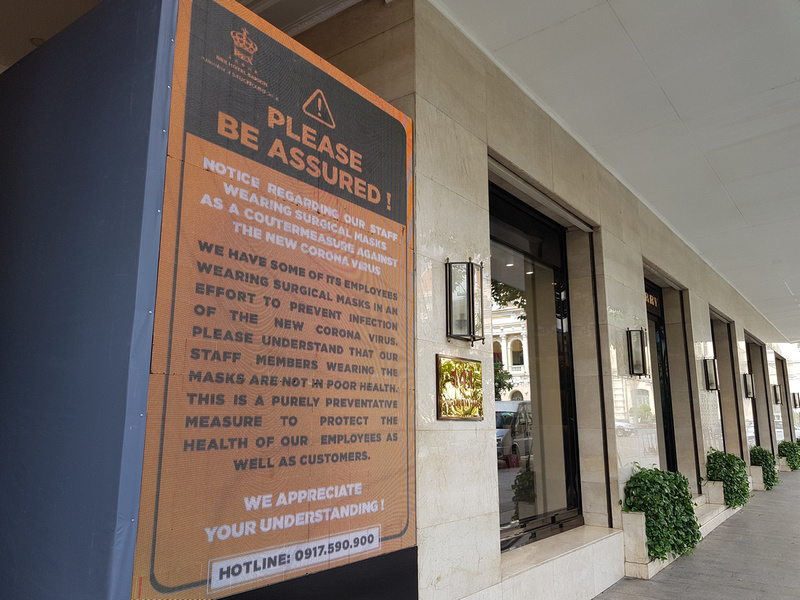 There seemed to be less traffic on the road, and more days of brilliant blue skies. Schools were shut, and workers who can were being asked to work from home. Meanwhile electronic billboards are displaying public health notifications about wearing a mask (though good luck finding any). 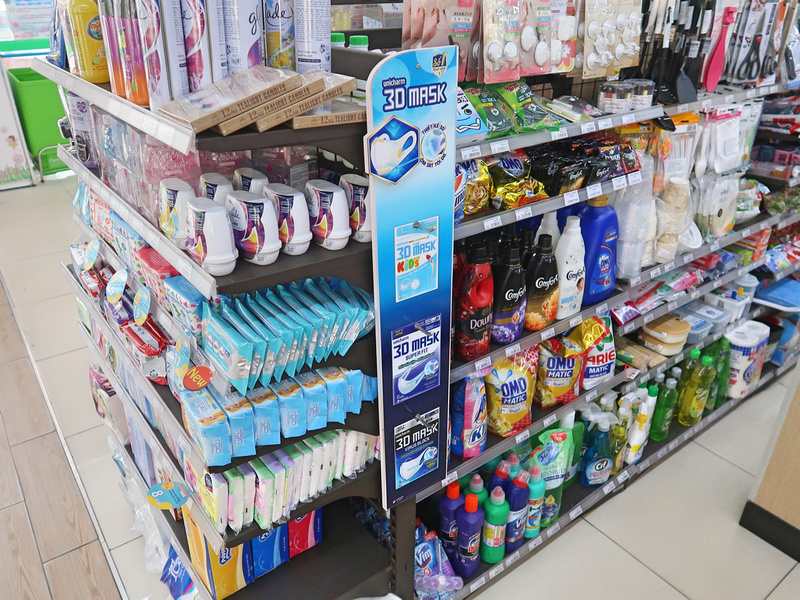 With no school for the month, school teachers are not working, and I know some people in manufacturing who have stopped work because supplies from China have dried up. Tourism has obviously taken a big hit as well, with cancellations on top of the flight ban from China. I had two conferences planned over the next month that have been postponed, and as Nomadic Notes features so much content about Asia I have noticed about 40% traffic decline.

It’s too soon to tell how this is going to unfold, but already with mega bushfires in Australia and baboons on the loose in Sydney, the 2020’s feels like we are in the opening scene of a b-grade disaster movie.

While I was in India I started reading The Anarchy: The Relentless Rise of the East India Company. This was the perfect book to read while in Kolkata (formally Calcutta) as it was the EIC base of operations.

It explains why Kolkata is so grandiose, and how it came to be that Britain was able to colonise most of South Asia.

It was interesting to walk down Clive Row (now renamed Dr Rajendra Prasad Sarani), now knowing who Clive was (apart from being a curry powder).

I’m less than a month behind my trip reports now, so I might have time for some other non-trip related posts next.