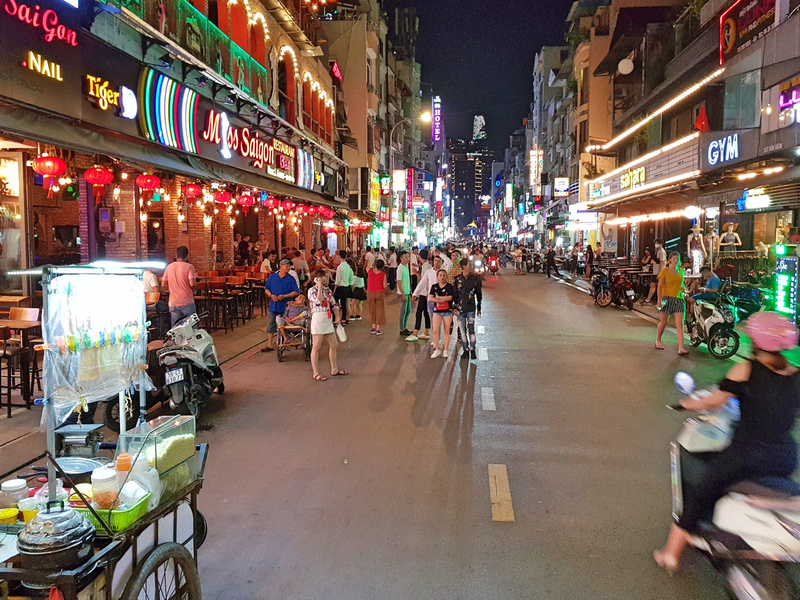 Greetings from Saigon and another edition of Where I’m At – my monthly summary of where I’ve been and other site news.

The last month was a big travel month that felt like more of a holiday than my usual travels. I did what has become my annual trip to Europe, which is a break from my current project themes of development in Asia. 10 years ago I used to spend the bulk of the summer months in Europe with a short break in Asia. Now it is reverse.

This is a brief summary as told by Instagram photos, and there will be full write ups for each place over the next month.

Good morning from Nha Trang. I had a fish soup for breakfast, but I was mighty tempted by this mobile donut vendor.

The month began in Nha Trang, which was the first leg in a series of cheap flights I used for this trip. You can read my trip report here: Notes on Nha Trang – stopover edition.

As an Australian there aren’t as many opportunities to travel hack with credit cards compared to the opportunities on offer to my American friends. There are some credit card offers though, so when I was last in Australia I did a banking reassessment and got a new credit card that included bonus Qantas points. That was how I ended up in Hong Kong, which had a good range of flights for less points for where I wanted to go. I never pass up an opportunity to spend a day here so I made a break of it.

I’ve been in Montreal to hang out with my friend Jodi from @legalnomads . The last time we caught up was over 4 years ago in Saigon. Since then her health has taken an absurd turn for the worse, which you can read about at legalnomads.com. Most of her days are spent laying flat, so we managed a selfie during an upright moment of the day.

Montreal has been on my travel radar for years, especially as one my best travel friends and fellow nomad hails from there. Unfortunately Jodi has been going through some horrendous health issues which has her housebound in Montreal. Jodi spent four northern summers in a row residing in Saigon, so not being able to travel in addition to battling health problems is an awful blow.

Montreal is a good as everyone raves about it to be. Usually it’s foreigners who will tell you how good it is, as Canadians seem to be humble about what an amazing city this is. I will have a city report soon. I need to visit Mexico City (never been!), so I can then say “these are the best cities in North America”, of which Montreal would be on the list.

Hello London! Good to be back 🇬🇧

2019 marks the 20th anniversary of my first visit to London, and I have been back every year since. I don’t really have a travelversary or nomadiversary as there are no defining dates, but I guess you could say that my life of living abroad began when I got a work visa for the UK and moved to London in 1999. It still remains as one of my favourite cities in the world, though I am now satisfied with short visits.

My system for travel in Europe is make a short-list of places I haven’t been and then try and work out an itinerary from there. After visiting Cyprus last year the Mediterranean has been a strong lure, and I think the islands of the Med will be my focus for my next few trips. Malta was a new country for me, so visiting a country for the first time is always an extra special travel day.

It was "bring your dog to work day" in Athens.

I’ve been to Greece before but I had never been to Athens. After so many years of travelling in Europe this was the biggest oversight in my European travels. Everyone knows about the Acropolis and associated ancient Greek history that can be seen here, but it is also a gritty urban city that seems to divide people. Just the mention of gritty and urban though and I knew I was going to love Athens. And sure enough I did. I have two posts coming up about Athens, and I could see myself coming back here on the way to exploring more Greek Islands. The remaining countries that I haven’t been to in Europe are in the Southeast, so it might make more sense in the future to either fly here or Istanbul instead of London.

Shamian is the former British and French concession island in Guangzhou. It has a remarkably intact collection of European colonial architecture.

The reason I do go to London is that often flights are hundreds of dollars cheaper than other points in Europe. Finishing up my European adventure I found a cheap flight from London to Ho Chi Minh City with China Southern. Rather than flying straight through their hub of Guangzhou, I checked to see what the price would be if I added a 2 day stopover, and the price remained the same. I’m all for making stopovers, especially to break up long trips. I did that last year when I added a stopover in Kazakhstan. It’s now easier to make a stopover in major cities in China with transit visas allowing up to 6 days.

Guangzhou is an enormous city of over 12 million people, and that’s just one city of the Pearl River Delta megacity. I was last here in 2010, so I was curious to see how much it’s changed since then. I will have a post about Guangzhou, and what it’s like flying with China Southern.

Bun Ca Nha Trang (the name of the shop and the soup) with its bountiful supply of sauces.

And back “home” to home base of Saigon. After eating more bread products in a month than I do in a year, it was good to be back on the noodle soups. While I was away the seasons changed from dry to wet, and it’s a noticeable difference being back compared to the searing heat when I left.

I have some domestic trips in Vietnam coming up, as well as some trips around East Asia. I also have some projects related to Southeast Asia railways coming up which will keep me travelling in the region for this year.