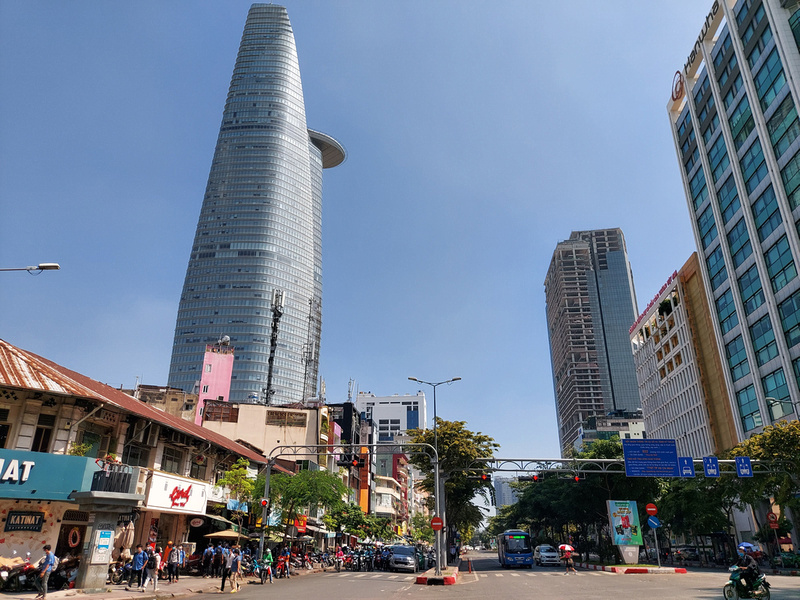 Greetings from Saigon, happy new year, and especially good riddance to 2020. I saw out the new year in Saigon, which wasn’t in my game plan at the start of the week. It seems only appropriate that I ended the plague year of 2020 with a travel plan going wrong. Not that I’m complaining, as I got to spend the night with friends in a safe (and tropical) environment.

Here is a brief snapshot of where I’ve been over the last month. More detailed trip reports usually follow a month or two after a trip. If you are just tuning in for the first time (welcome!), I’ve been travelling within Vietnam and not internationally in these pandemic times.

To get alerts of the latest posts, and for updates not included on the blog, subscribe to the weekly travel newsletter. This email update also includes a roundup of the best travel reads from around the web.

The month began in Tam Ky, where I was caught in a week of heavy rain. I didn’t get anything done there, so I will return another time.

The day I got back to Saigon there were two new covid cases reported, and within a day the authorities had quarantined everyone they could find who was in contact with them. They are not messing about here, which is why reported cases have remained so low. This swift approach has allowed the rest of the city to get on with business. And I’ve said before that if my street suddenly gets locked down so that the city may get on with life, then so be it.

I visited Da Lat eight years ago, so visiting again was like visiting anew. I remembered the main sites like the lake and the main market, but the rest is a blur. Da Lat is in the Central Highlands region of Vietnam, and it gets cold there. It became a getaway for French colonialists from Saigon, and there was even a railway built here that connects to the main North-South railway.

My trip here involved the things I like to do when visiting places; hanging out in cafes, wandering city streets, and riding railways. I will have separate posts about Da Lat and the tourist railway.

According to my photo records, I must have had lunch or a toilet break here in 2005 on my first trip to Vietnam. There are Cham temple ruins here that make for a scenic stop between Da Lat and Nha Trang.

Phan Rang-Thap Cham (or Phan Rang for short) is on the North-South railway, and the station here (Thap Cham) was the point where the Da Lat railway departed from. There have been calls to restore the line, though it is unlikely to happen. I will post the details in another blog post.

Like my trip to Tam Ky, Phan Rang turned out to be a blowout with the weather. An unseasonal storm in the south was creating strong winds in the area. I had planned a coastal exploration from here, but riding in such winds isn’t fun, and grey choppy seas were not the introduction to the coast I wanted to see.

Apart from that random storm, December is one of the best times of the year in Saigon and the Mekong Delta. My plan was to work my way through the Delta to Phu Quoc and make the most of the early dry season. After arriving in the hub city of Can Tho, I went to Sa Dec. I think this is one of the most underrated destinations in Vietnam, and I will post a detailed guide for what to see there.

I was planning on spending the new year in Phu Quoc, but it turned out that I had to get a visa stamp by the end of the month so I came back early. I’ve been on the free automatic extension, but it was causing problems to not have a new stamp. So that was one more trip added to the pile of cancelled trips in 2020.

I’ve been fortunate to do so much travel here, so I wasn’t bothered to finish the trip. It’s been good to be able to travel in Vietnam where the virus is under control. The news of even a few new cases puts me on edge, so I don’t know how anyone is able to travel without stress where the plague is running rampant.

Usually in the last week of the year, I review the year that was and make plans for the year ahead. I would make a general plan for travel that revolves around seasons and events I would like to go to.

I felt that by March last year that the rest of 2020 was going to be a write-off. At this point I’m not optimistic about the prospects for travel in 2021 either. I would be happy if I made it back to Australia for Christmas, but other than that wish, I have no plans or wishlist for the year.

I have made contingency plans in case I have to leave Vietnam. So far the government has been gracious with their visa extension policies, but it’s always good to be prepared. I had considered Taiwan and Thailand as other options, though I am concerned about the latest outbreak in Thailand. In Vietnam, every time there has been a new outbreak the government has been swift in locking down streets, and if it got too out of hand a city-wide shutdown.

As for Australia, they are still not letting international flights until mid-2021, and there are still thousands of Australians that want to return. I don’t want to go back, so there is no point in me taking a seat from someone who does. Australia also has an international travel ban until at least March.

I’m not into making travel predictions, so I can only hope that a vaccine campaign is effective enough to get the world on the road to recovery.

One new post at Nomadic Notes: Notes on Lao Cai – The provincial capital on the Vietnam-China border.

I’ve been posting more frequently at Living In Asia, so if you’re interested in what future travel in Southeast Asia might look like I have some new posts: