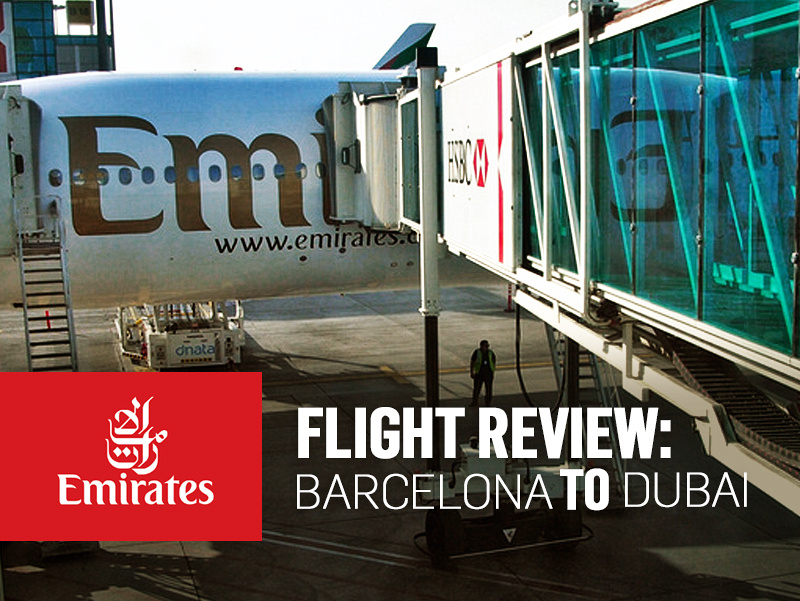 The tourism office sent me the itinerary to confirm if I was happy with the airline, and after comparing all flights at Skyscanner the Emirates flights they booked was the cheapest with the shortest layover time. The last time I flew with Emirates was in 2007 and I recalled it being a good flight so it was an easy choice.

Check in is available 48 hours before the flight. I didn’t have the right booking number, and as the flight was booked by an agency I had to wait to get the number from them. By the time I checked in most of the seats were allocated.

Even though most of the seats were booked I was surprised to see such a large queue at the airport. I went to the online check in queue and there was one person in front of me, compared to the queue that was snaking through the departure hall. 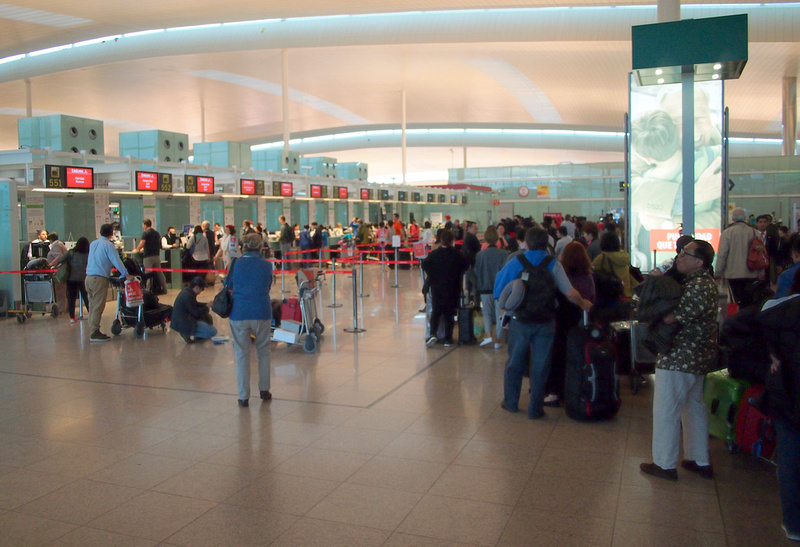 The scheduled flight time is 6 hours and 20 minutes, leaving at 10.40pm and arriving at 7.30am. It’s good for making connections at Dubai but a short overnight flight means no sleep for me. 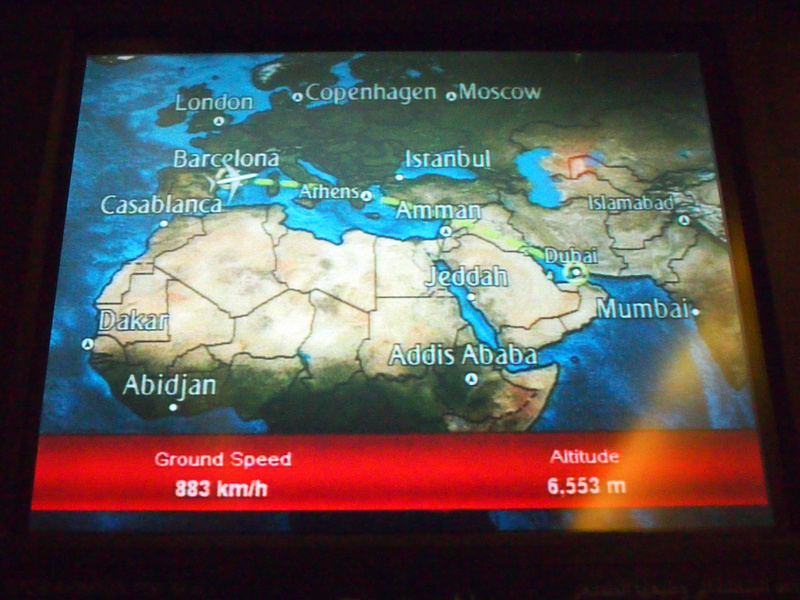 When I booked there were a few empty seats at the back where the 2-seat rows are. 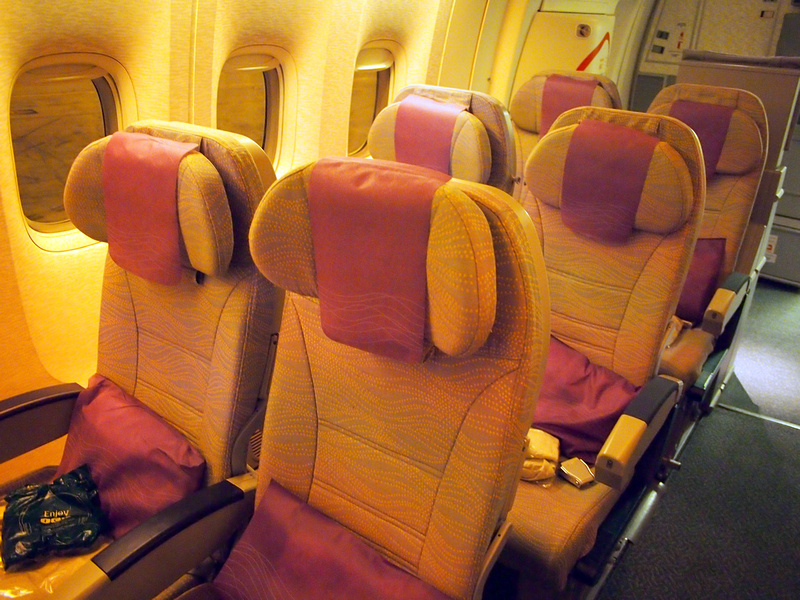 I picked a 2-row seat that is behind the last 3-row seat as I thought it would be better for room. 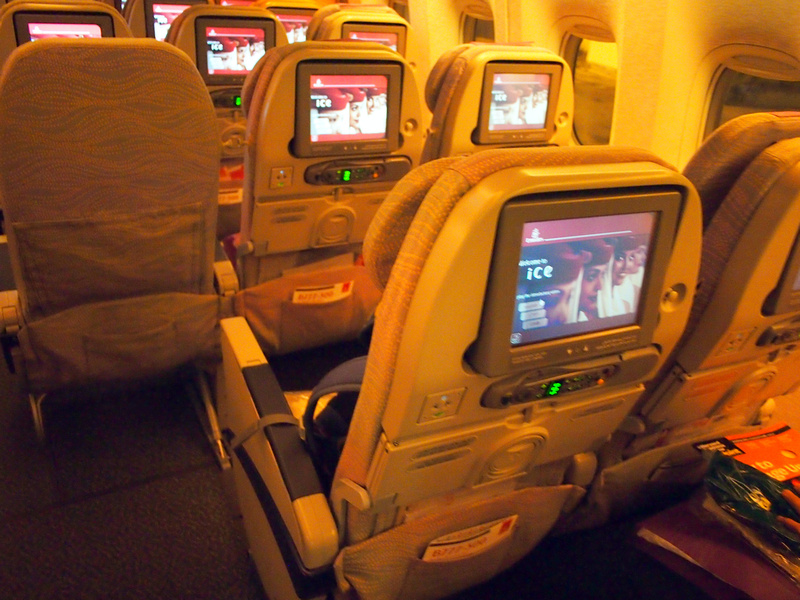 While it was good for room the seat isn’t aligned in row with the rest of the seats. As a result the tray table doesn’t fold down squarely and instead it sits on top of the arm rest. To remedy this the they have installed a seat with a fold-out tray table. If you are the sort of person that is disturbed by a picture that is not hanging square on a wall then this is not the seat for you, because the TV screen is is also not exactly in front of you. 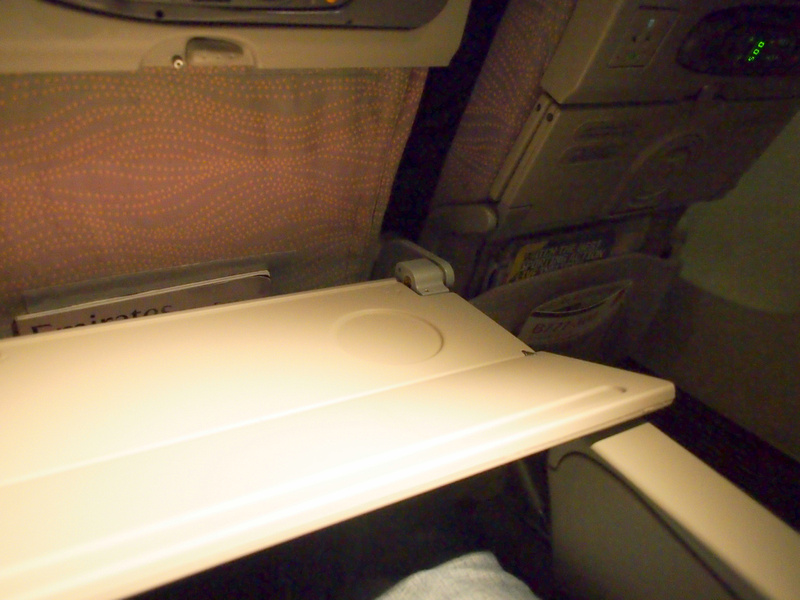 Before the flight I was reading that Emirates will soon be flying the A380 to Barcelona. For this flight they were using a B777-300. I’m not sure how old it was but the entertainment units were probably the same style as my flights 8 years ago. The screens were small and the touch-screens were temperamental. These are the last of the old entertainment units which are being replaced with larger screens. It didn’t help that my last long flight was a premium economy seat with an extra-big screen. 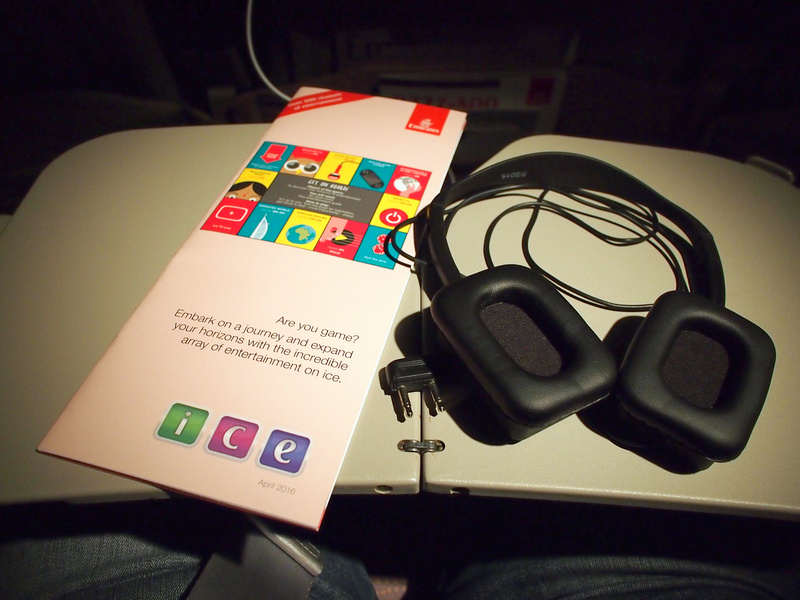 The seats have power outlets and USB ports so I was able to keep my iPhone charged, which is on its last legs. 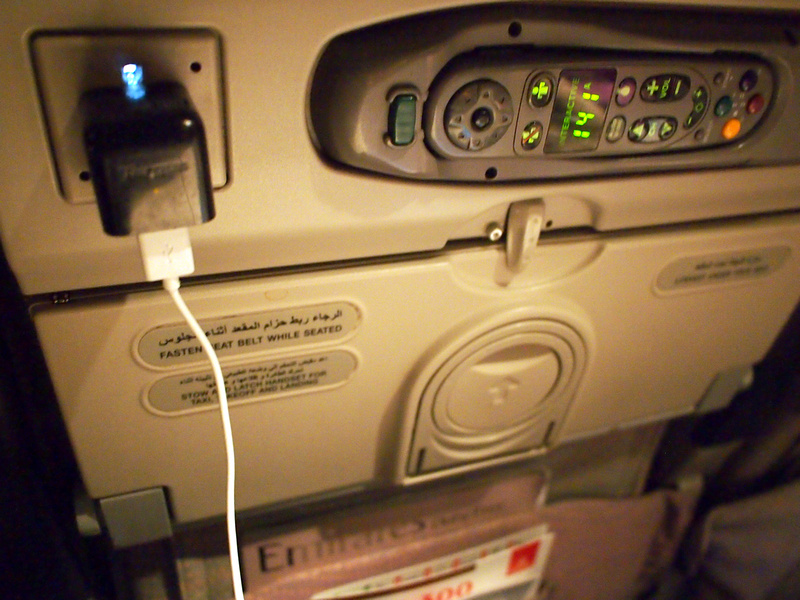 After take off dinner was served, and I got the chicken dish: 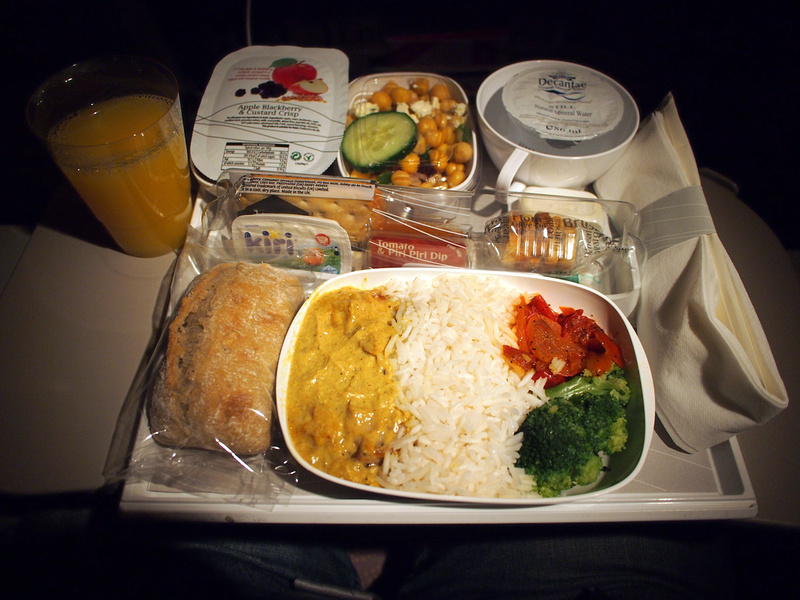 Open Skies inflight magazine for your old-school onboard entertainment. 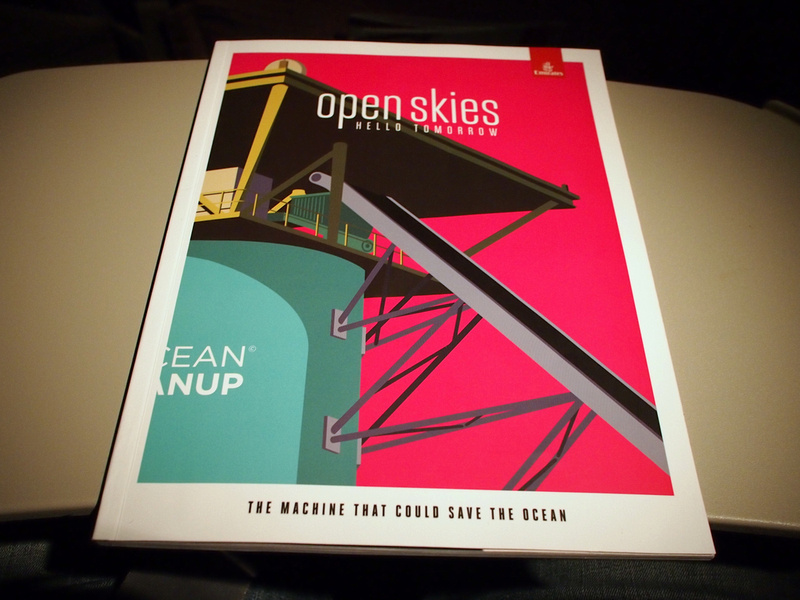 With the flight being just over 6 hours there is not enough time for a full breakfast, so a small snack offering is provided before landing. 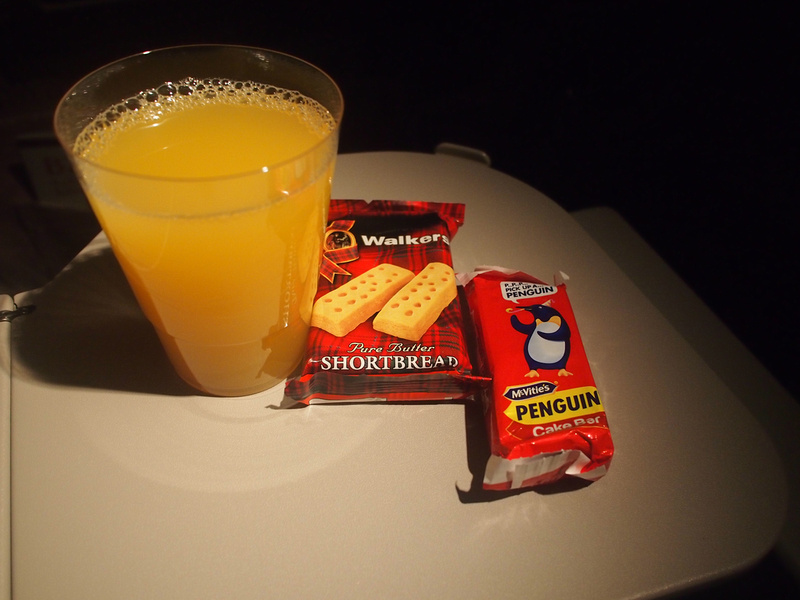 In the nine years since I last visited Dubai the city has changed a lot. I’m due to go back for another visit, but until then I made do with admiring the view from the window. 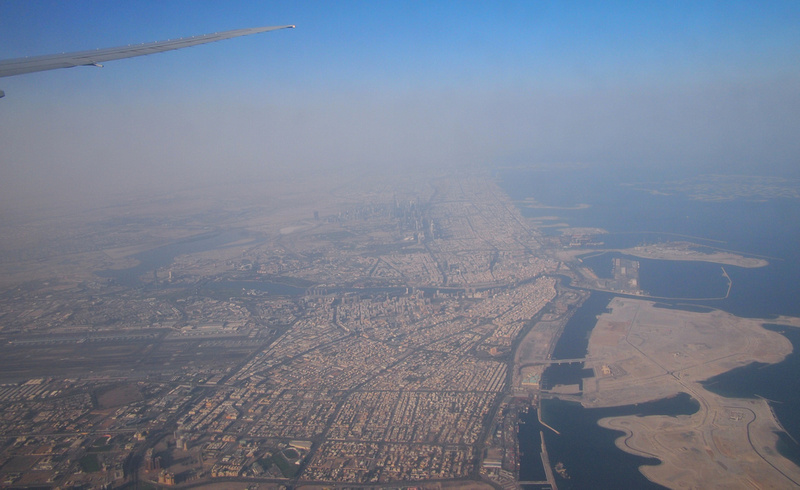 The flight arrived close to on-time and I then made my connection for my next flight to Johannesburg.